I’ve not written about Athena’s eating habits for ages, but recently we seem to have leapt a bit of a hurdle with food so I thought I’d do an update. After the side effects of her 12 month jabs we had a week of very little food consumption, which was a bit worrying but after a week or so she seemed to get her appetite back and recover!

Breakfast: generally toast or crumpets with Jam/cream cheese or cheerio’s and a few grapes or a Banana.

Lunch: a sandwich (if breakfast wasn’t bread based) with ham/sliced chicken as a filling, or a picky lunch of cheese, vegetables (not much gets eaten unless it’s cooked) with hummus, potato cakes, anything pasta related, wraps with cheese and pickle… all followed with fruit or a yoghurt.

Dinner: whatever we’re having generally. Sometimes I’ll give her a ready prepared meal like ‘scrumptious chicken dinner’ or whatever ridiculous name they call them but these just look so unappetising I do try and avoid it, but they’re good for when my mum has her or I’m not cooking for us for whatever reason (like when Sam is on a late shift). Also this option is fairly messy as someone’s spoon to mouth control isn’t too brilliant just yet! Sometimes I’ll make up some jelly (on bath nights generally!) for a fun pudding, but generally a fruit pot for ‘afters’.

Drinking: Still breastfeeding, although she will drink cows milk from a bottle which is a relief as it took a while to get her to do so! Since she’s started nursery she’s refused most of the bottles of cows milk they try and give her but guzzles water and eats all her lunch/dinner/snack without fail, so i’m not too fussed about her refusing a bottle when she’s there! A few times we’ve given Athena watered down orange juice, and were sent some Vita Coco for Kids, which is flavoured coconut water. Once she’d mastered not squeezing the carton she seemed to really like this, and it has a lot less sugar in it most squash drinks too! This is definitely a treat rather than an every day drink until she’s a bit older though! I did freeze one of the cartons and let her suck the frozen juice last week when it was super hot! 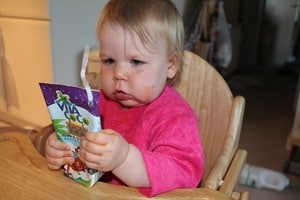 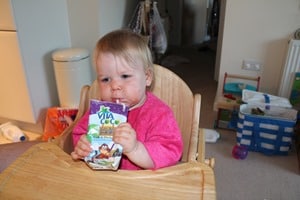 [we were sent som Vita Coco to try out, it went down well, thank you!]

One thought on “What the baby ate”