One of my biggest parenting challenges is around food; snacking on the wrong things, not getting a balanced diet, and being unwilling to try new things. Literally every dinner time is a cause of stress for me in one way or another. My meal plans are boring and uninspiring (well, to me anyway- the kids seem perfectly happy with the same four or five ‘safe’ meals on rotation!) and that’s something I really want to work to change, which will mean widening the food they will eat, as well as getting them to understand why they need to eat a balanced diet. Athena has started to learn a little about nutrition at school, and has hot school lunches too which has helped to widen her tastes a little, though often she won’t even try something I know she will have eaten at school when I make it, which is beyond frustrating! When I was asked if we wanted to test out the Change4Life Food Scanner to see if it could make a difference to our food choices, and start to change the kids attitude to food I thought there was nothing to lose, and both Sam and I downloaded it to our phones. You can use the app wherever you are connected to the internet, so you can use it things you have already bought and also in shops when you’re deliberating over what to buy. Using the app is really easy, you don’t need to sign up or log in, and you can see a list of food you have previously scanned within the app.

Once you’ve scanned the barcode of something you’ll get a screen that displays what the item is, and a ‘traffic light’ display for sugar, saturated fat & salt, and a note about what to check for r a fact about the nutritional value for each food. You can then click to find out the exact amount of sugar, fat, salt and calories using graphics as well as text, which is idea for kids to understand. For example the sugar cubes drop down into a stack so there is a clear visual to help them understand. 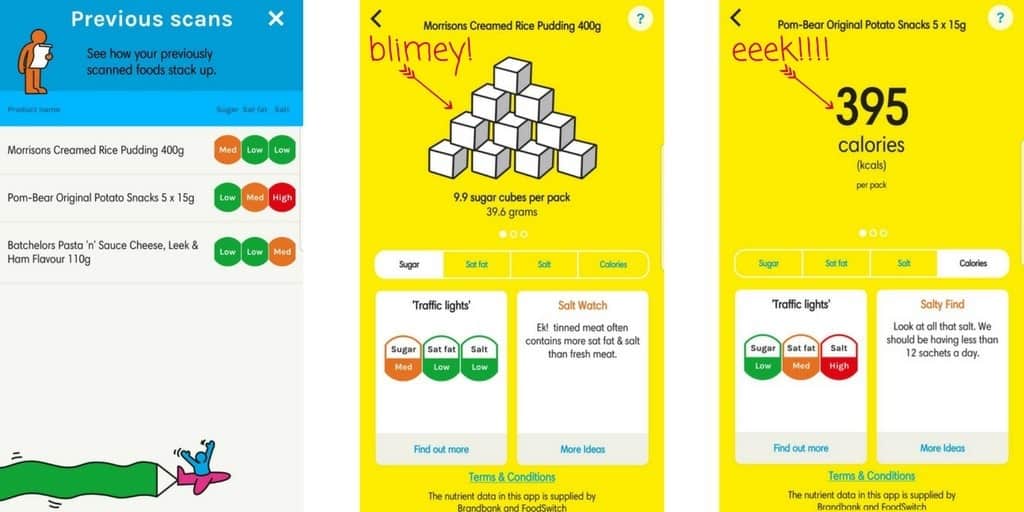 Now, I have to admit that I was really shocked at exactly how unhealthy some of the snacks really are that my kids have regularly. Now I KNOW a packet of pom bears isn’t that nutritious, but I really didn’t expect one packet to have 395 calories a pack! In an ideal world a packaged snack for kids should be under 100 calories and limited to two a day. Now I can remember days when the kids have probably had at least two packets of crisps in a day on top of probably a few biscuits, a snack-pack of raisins and probably even a fruit shoot if we’re on a day out- these things are my go-to solutions for keeping them happy on long journeys, keeping them quiet in a queue or just to end the incessant whinging of ‘mummy I’m hungry… I need food’. Now I arrived at our child  minders a bit early last week and the kids were just sitting down to a snack of a sliced banana, a small pack of mini-cookie biscuits (one shared between four kids- so two tiny biscuits each) a slice of cheese and some grapes. Arlo wolfed it down without complaint, and as soon as I we got home he declared he was hungry again. This tells me two things; he will eat healthily when it’s not me giving him the food, and he says he’s hungry out of habit/boredom. So after using Change4Life Food Scanner and coming to the realisation that both my kids use food as a power play that something needs to change, and fast! 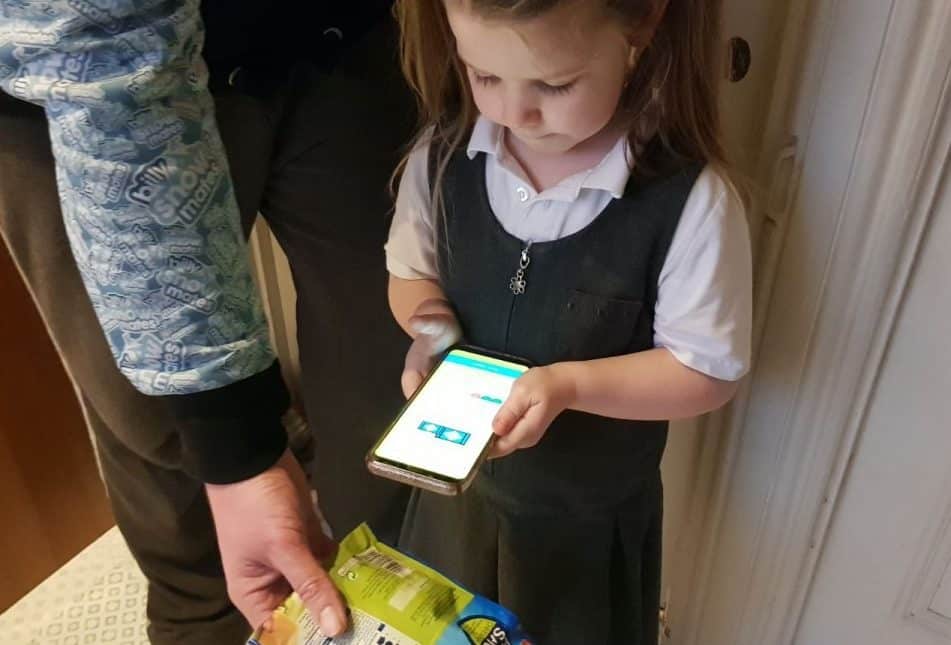 Arlo at two is still a bit too young to fully grasp the concept of ‘healthy foods’ but Athena does seem interested, and the fact that I let her scan the barcodes using the app is something she loves, and is now getting more involved. I can’t say this past week has been easy as I have tried to push her in the direction of the dried fruit and away from the smarties but when I can show her the two info screens side by side showing which snack is the best option for a healthy body she couldn’t really argue with me! 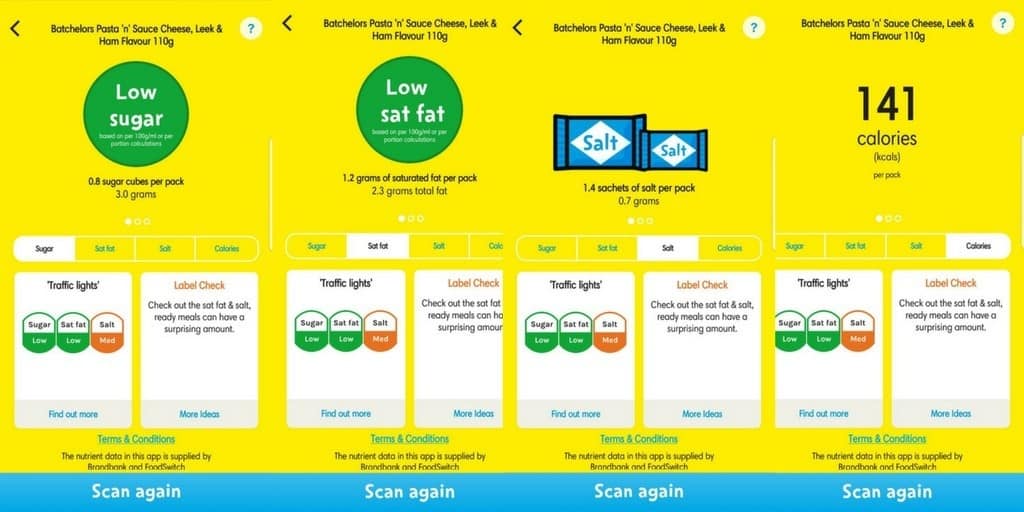 Two immediate changes I am making since starting to use the Change4Life Food Scanner and immediately reducing my use of jars of sauce in cooking, and my use of ready meals. Yep, terrible mother alert klaxon, at least once a week I will feed my kids a ready meal. I know it’s lazy and not good for them- but on a Wednesday we all have a really long day and don’t get home till almost 6pm, which is bedtime- and it’s just so easy to whack a ready meal in the microwave, split it into two bowls, let them scoff it and get them into bed sharpish. But now I am going to treat myself to another slow cooker, and one day a week I am going to batch cook, and freeze portions in the right size. Batch cooking is something I do sporadically, but normally with sauce from a jar. Then I stick the whole lot into a large tub and freeze it, which means it’s not easy to portion up to reheat, and I often defrost the whole lot then don’t eat it all before it needs chucking out. A waste all round and actually, using sauces from a jar means the meals are almost as nutritionally naff as feeding the kids a ready meal!

When you find something that is ‘green’ (aka low) for sugar, fat & salt you get a cheery little green man telling you you’ve made a good choice… though the screenshot I’ve taken this from is actually from when I scanned a bottle of my husbands diet Coke, so yes it’s sugar free but not exactly healthy… however I wouldn’t be given that to the kids anyway, though it is something to be aware of if you’re going to let them have free reign with the scanner!

We’re definitely going to carry on using the Change4Life Food Scanner, but hopefully as we start to eradicate the not-so-healthy choices from our cooking and snacking routines we will naturally need to use it less, as we introduce more cooking from scratch and snacking on fresh ingredients! It will always be handy to have though when the inevitable ‘mummy can I have a packet of these…’ crops up when we’re in the queue at the shop! I know it won’t be easy, but I am hoping the sooner I make these changes the easier it will be in the long run to try and widen the variety of food the kids eat, and more importantly make sure they’re not consuming too much sugar, salt and fat!

If you fancy trying the app out then you can download it on Android or from the Apple Store, and if you do then I’d love to know if you were as shocked as I was at what some of the snacks my kids regularly eat contain in the way of far, sugar and salt!