I love food, but don’t write about it enough. There are a couple of reasons for this at present, the first being that I rarely cook for anyone other than me (husband works evenings mostly!) and the second being that I am mostly eating biscuits and porridge at the moment, so nothing too thrilling to write about! Anyway, here is a nice three-fold foodie post for you to enjoy! 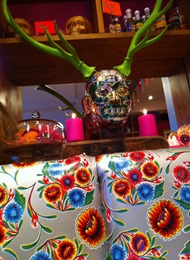 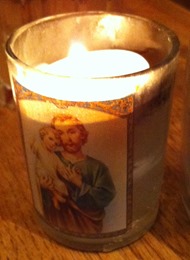 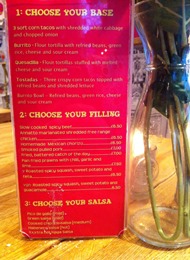 Last Friday I was invited to Gelato Gusto’s first birthday party, but decided to have a quick bite to eat before hand (which was actually a daft idea, as I had less room for Gelato, but as I’m eating for two (ha!) I managed it.
Karina and I went to La Choza (http://www.lachoza.co.uk), a Mexican street-food place (36 Gloucester road). I’d been before but not for a few months, and wanted to go back. Knowing Karina is a big Mexican food fan it was ideal, their menu is easy to read and decipher, you choose your ‘base’ (Burrito, Quesadilla, Tostadas or a Burrito Bowl) and then your filling, from a selection of 8 (including prawns, fish of the day and 2 veggie options) and then the type of salsa you want.
We had nachos for a starter, and I went for slow cooked beef quesadilla’s, but only managed 2 out of the three! Everything is presented in a fun and easy to eat way, in plastic baskets (which sounds naff but isn’t, if you ask me it makes it more authentically like what I can only imagine food from a Mexican street stall to be like!)
The decor is absolutely amazing, bright and colourful and full of sugar skulls, including a wall of coloured in skulls by kids that have eaten in the restaurant, in fact there was a big group of kids/parents in one corner being well looked after when we arrived, testifying to the restaurants ‘family friendly’ ethos. 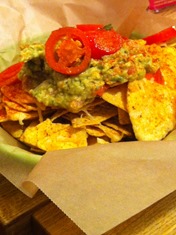 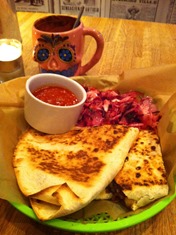 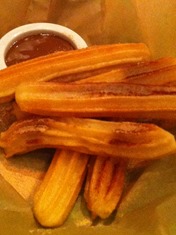 Although the starter and main completely filled me up (I also had a hot chocolate) we did manage to scoff some Churros with dulce de leche for a sweet treat, before we headed off in the rain to a Gelato shop. Maybe my uber sweet tooth means the sprog is a girl, if old wives tales are anything to go by!
Gelato Gusto (which is on the corner of Gardner & Church Street) has the most delicious looking array of gelato in their old cabinets ever. Every flavour you look at seems better than the one before it, and it’s 10 times better than gawking into the Ben n Jerry’s cabinet at the cinema… anyway we arrived for the 1st birthday celebrations, and the place soon filled up! We were treated to sorbets of various flavours (Bellini, chilli & pineapple (warning, HOT!) and Vanilla with blueberry and balsamic glaze to name but a few!) and were welcome to try out any flavour of Gelato we fancied. I plumped for Maple & Bacon, Ferrero Roche and Mint choc chip (my most favourite flavour of anything, ever!) 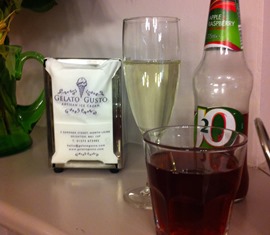 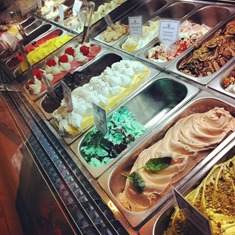 You’d think bacon in a sweet and chilled form would be vile, but you would be VERY wrong indeed! It was amazing.
We got chatting to Jon (the owner) and a bit later on to his dad who explained how Jon had gone off to ‘Ice cream University’ in Naples to learn all about Gelato and come back and made it work for him! 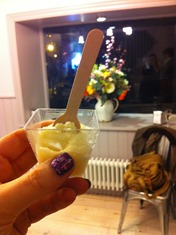 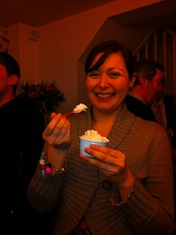 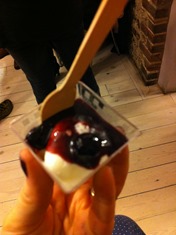 And if that wasn’t enough culinary goodness for one post, I am pleased to be able to offer 2 tickets to the Brighton Foodies Festival on May the 4th, 5th and 6th. It will be the third year for the festival and you can see my post about last years here, and it takes place on Hove Lawns. 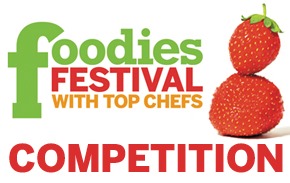 “Now in its eighth year, Foodies Festival has introduced new elements to all events in 2013. These include a spectacular Bake and Cake Theatre in association with Electrolux incorporating a ‘bake-along’ with members of the audience invited to participate. Decadent Steampunk baker Emilly Ladybird, will be demonstrating how to make a gin and tonic cake in conjunction with Hendricks Gin. She commented: “I’m so excited to be introducing Foodies to the world of Steampunk, it’s going to be fun, frivolous and absolutely delicious”
2013 also sees the introduction of a dedicated Chocolate Theatre to showcase the world of chocolate and confectionary with daily demonstrations from David Greenwood-Haigh of Divine Chocolate and Sciolti Chocolates as well as pastry chefs from top local restaurants”
I’m going again this year too, and will be waddling around attempting to avoid spicy foods in case anything causes me to go into an early labour! It was a great weekend last year, the sun was shining (and we got burnt!) and there was live music too, as well as being on the beach so a paddle can be had afterwards!
There is a rafflecopter entry form below and the competition will close on April 27th, please note that the winner will need to provide me with their postal address to be passed on to the event organisers for the tickets to be sent directly to them, and the one-day tickets you get can be used on a day of your choice. Good Luck!