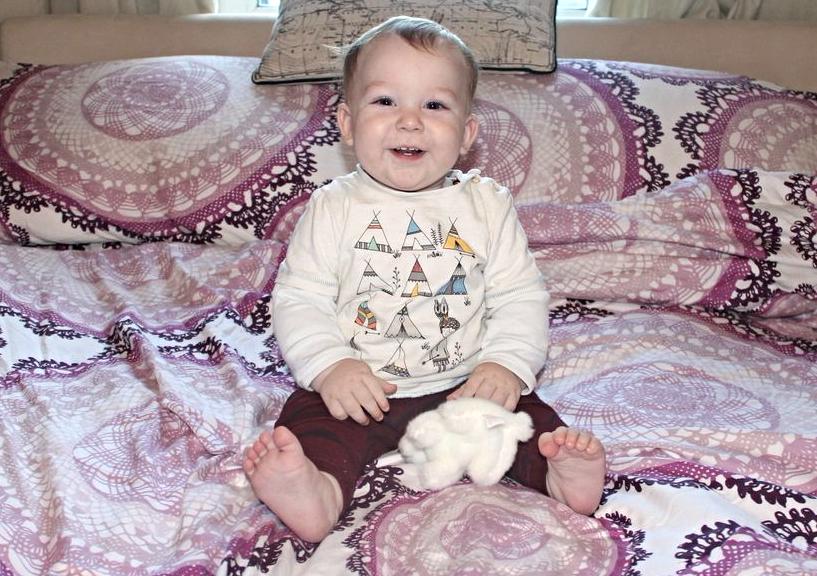 I skipped Arlo’s 8 month update as I didn’t have a laptop, I’ve now borrowed my mums so I can get this one up on time with the linky & a better photo! The last two months have been huge in terms of development, Arlo is now moving all over the place, crawling properly, pulling himself to standing and cruising around the furniture. He’s also climbing onto things too if they’re not too high (which so far rules out the sofa, phew!) Personality wise he’s definitely an explorer, and has no sense of danger just yet! He loves being pushed high on the swings and is happy to clamber around at soft play too. He does sometimes go crawling off too fast and too far, then look around for me and wail when he can’t see me! He hates getting his nappy changed (or being on his back in general) and will roll and crawl away, and gets into a proper paddy when I get him out of the bath to get changed, though he is happy to be naked during the day!

Sleeping is a little better, he’s still sleeping in bed with us rather than in his attached cot for most of the night but I think he’s waking up less. A few (amazing) times he ended a feed himself, crawled away and nodded off on his own which I hope he starts to do a little more frequently! He’s having one long nap in the middle of the day when Athena naps (so for around two hours) and most days will have either a morning or afternoon kip for around 30 minutes in my arms, some days both. Arlo definitely has found his voice too, we’ve had lots of dadada’s and mamamam’s as well as a few gagas and a LOT of screeching!

He got a fairly bad case of oral thrush the week before Christmas which has more or less cleared up now but meant that he didn’t want to eat much as it hurt, so we’ve gone right back in terms of weaning. I am really struggling to get his medication in his mouth, too He really hates having anything put in it these days, including calpol on the rare occasion I’ve tried! He does however love a chomp on his toothbrush so fingers crossed it’s doing something! We’re still breastfeeding on demand, which is a lot and I couldn’t actually tell you how many times a day!

He now has seven teeth with the eighth on it’s way at the bottom. His hair is growing nicely too, some days its light brown and other days more strawberry blonde! His eyes are still very much blue and framed with gorgeous long lashes. He weighs around 22lbs and is in 9-12 month clothes but is rapidly outgrowing that size!

A Linky for posts recording your child’s milestones or achievements, monthly or weekly updates and any letters that you write to your children