There are a few TV programs that my two are always happy to choose, and better still will always agree on, sitting down happily together to watch. PJ Masks is one of these programs and they’re both now quite big fans. We took them on a steam train to meet two of their idols, Gecko and Cat Girl (you can see the video here) last month, and Arlo also has a Gecko costume that he wears at least every other day, and sometimes sleeps in! 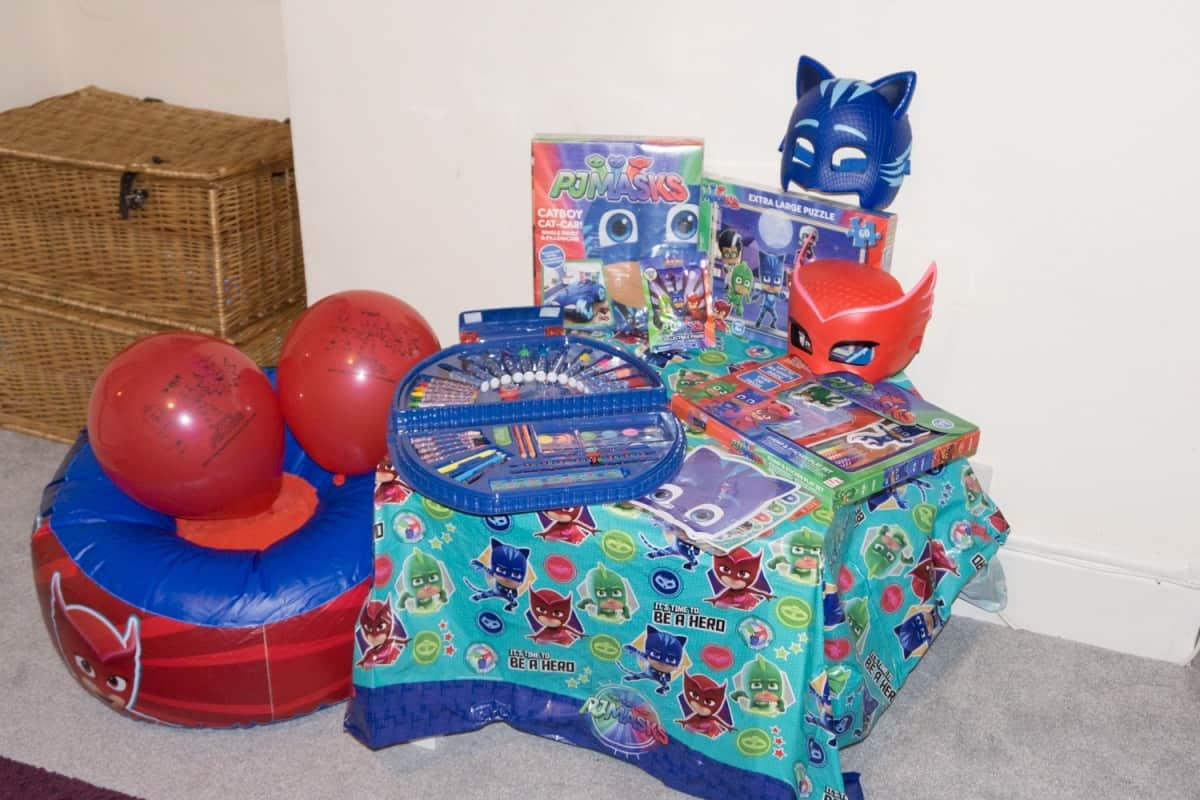 Now season 2 of PJ Masks is about to hit our screens these two little ones not only got to see the first two episodes before the rest of the world but they were also sent loads of goodies for their own PJ Masks party, which lasted most of our Sunday last weekend! I set everything up once the kids were in bed so they came into a surprise in the morning! 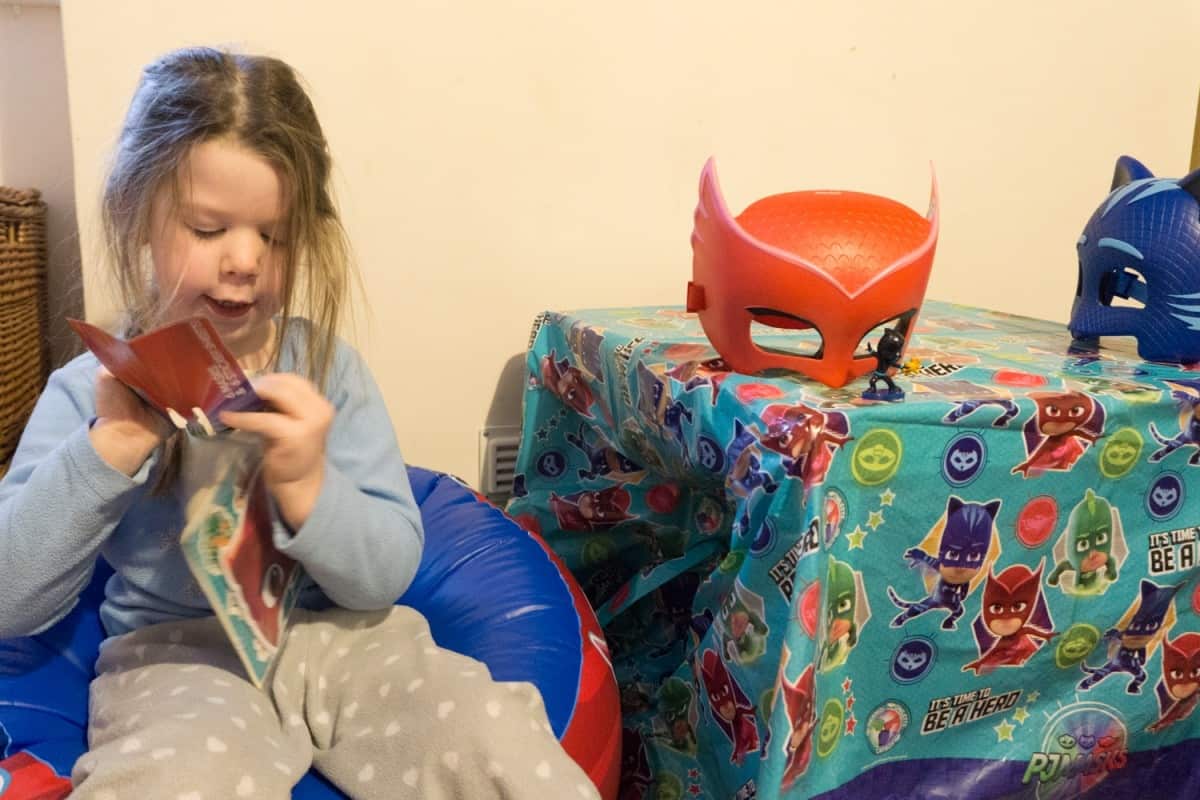 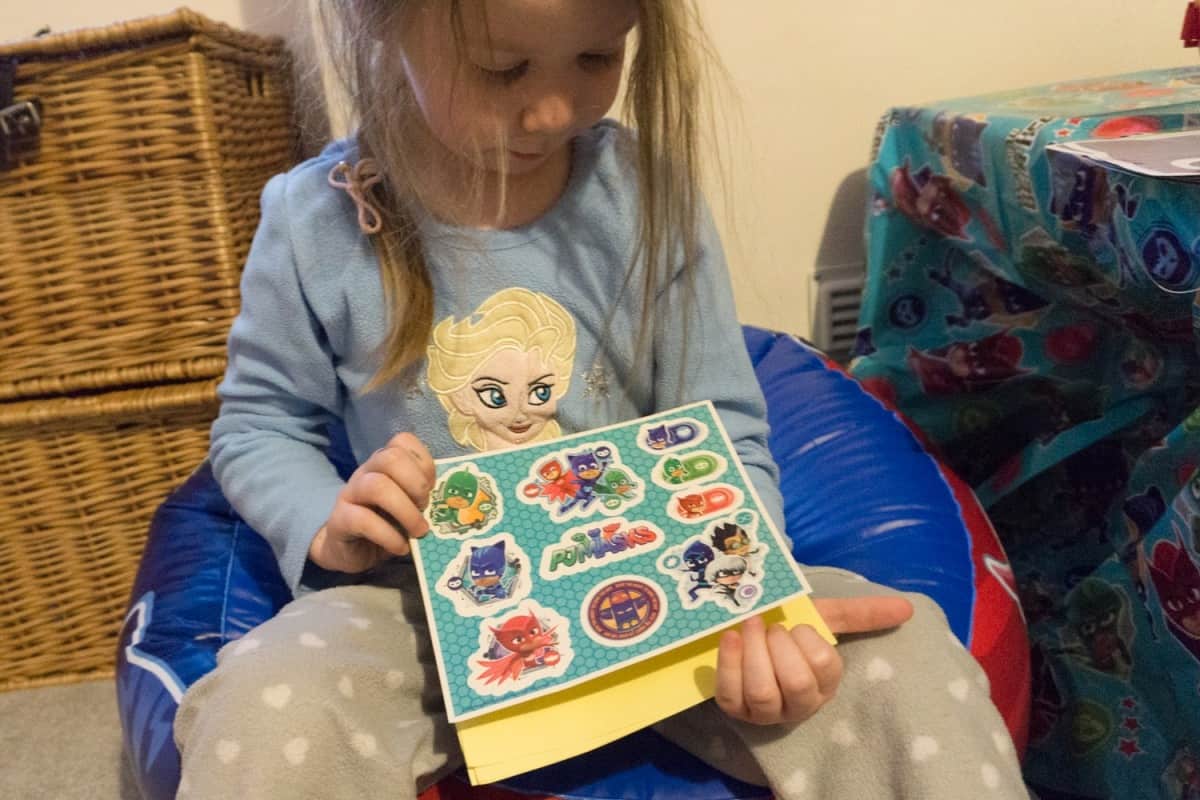 With craft sets, balloons, puzzles and masks to keep them busy we had a great day, watching the new episodes a few times! The only argument over who got to sit in the snazzy inflatable chair… but then they discovered the Catboy’s Cat Car duvet cover and Arlo wanted it so much he relinquished ownership of the chair to Athena! I filmed some of our PJ Masks day for a vlog which you can see here:

If you’re not familiar with PJ Masks then in a nutshell: Three 6-year-olds,  Amaya, Connor, and Greg, are neighbours and friends who go to school together. But at night then turn into Catboy, Owlette and Gekko, and create a little crime fighting team called the PJ Masks, with superhero powers (which is why my two love this so much I think!)  Each episode follows a little story where they solve problems, fight crime and have fun, but there’s always a moral lesson to be learnt! The first two episodes of the series are pretty exciting, I won’t give anything away but my kids have watched them about five times so far! 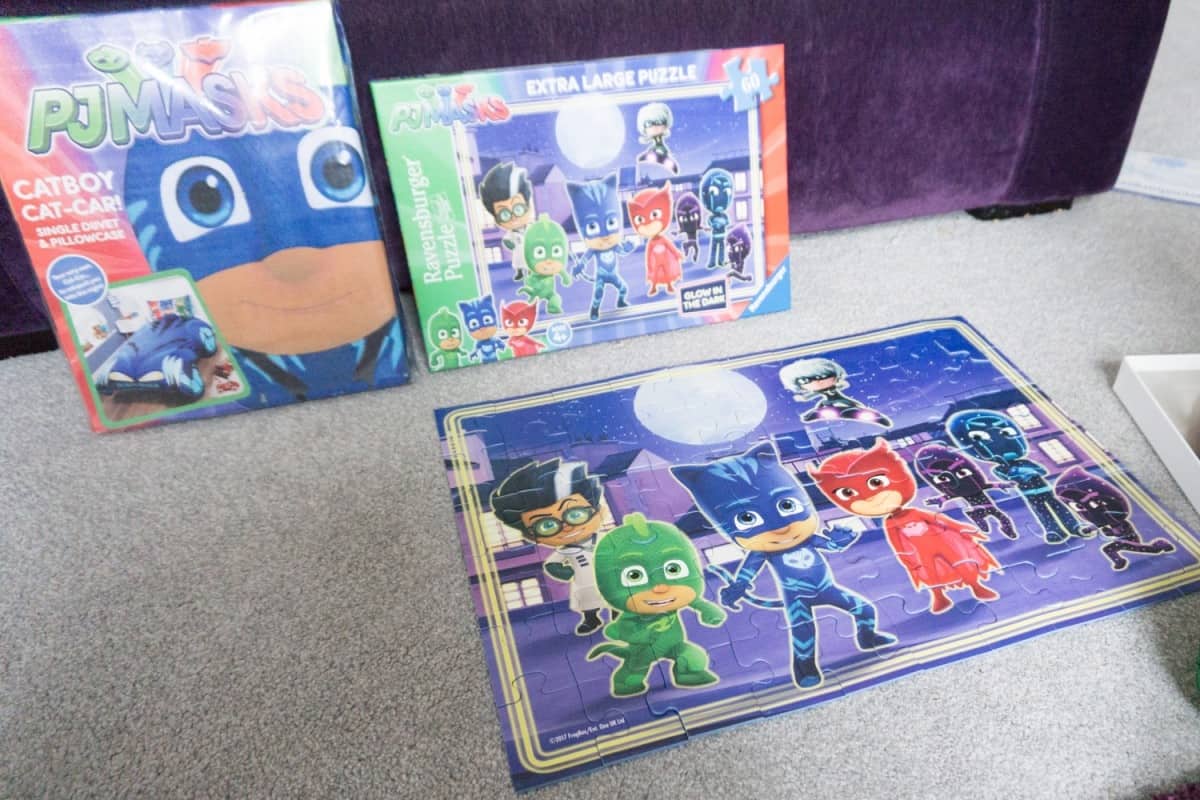 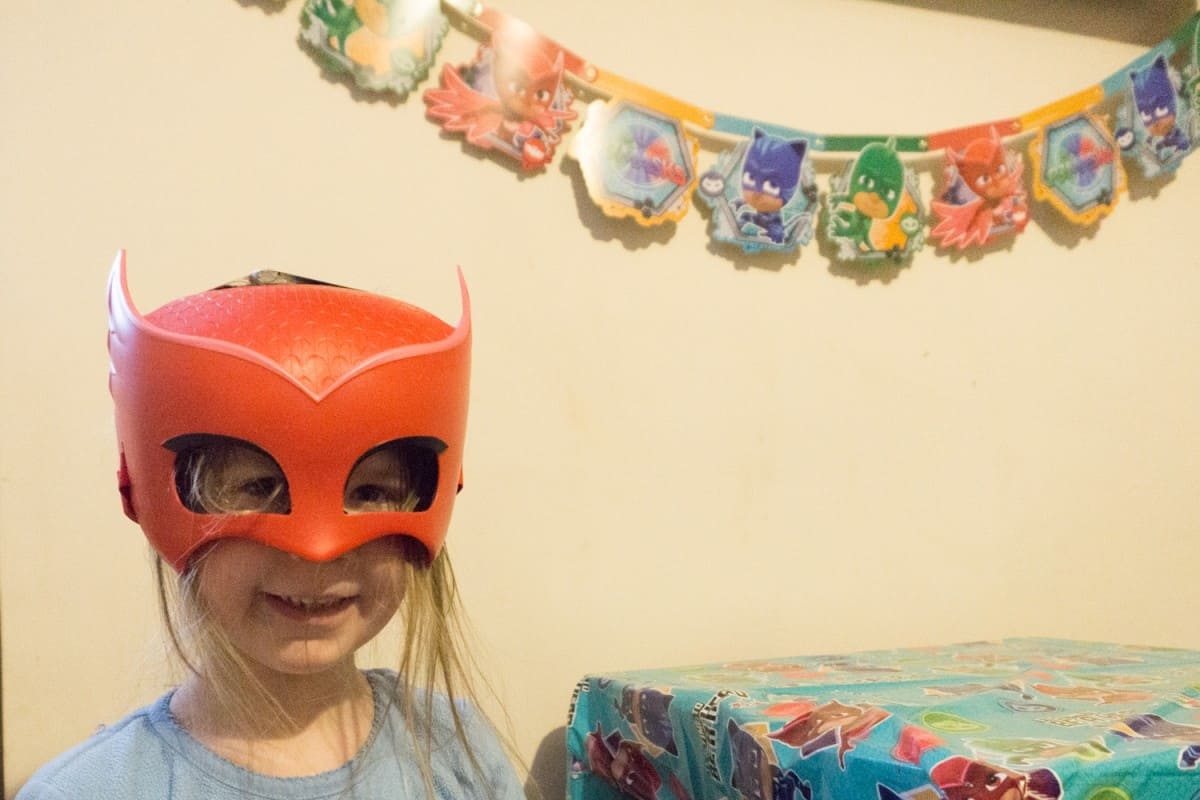 Most of the items my kids loved as part of their PJ Masks party are available from the PJ Masks shop on Amazon here, and the blind bags, partywear and the fab masks are all available at Argos. You can find the new episodes on Disney Junior at 4.30pm next Wednesday, the 28th March and then new episodes on Wednesdays going forwards! We’ll be tuning in, and if your kids do then let me know how long it takes you to get the ever-so catchy theme tune out of your head! 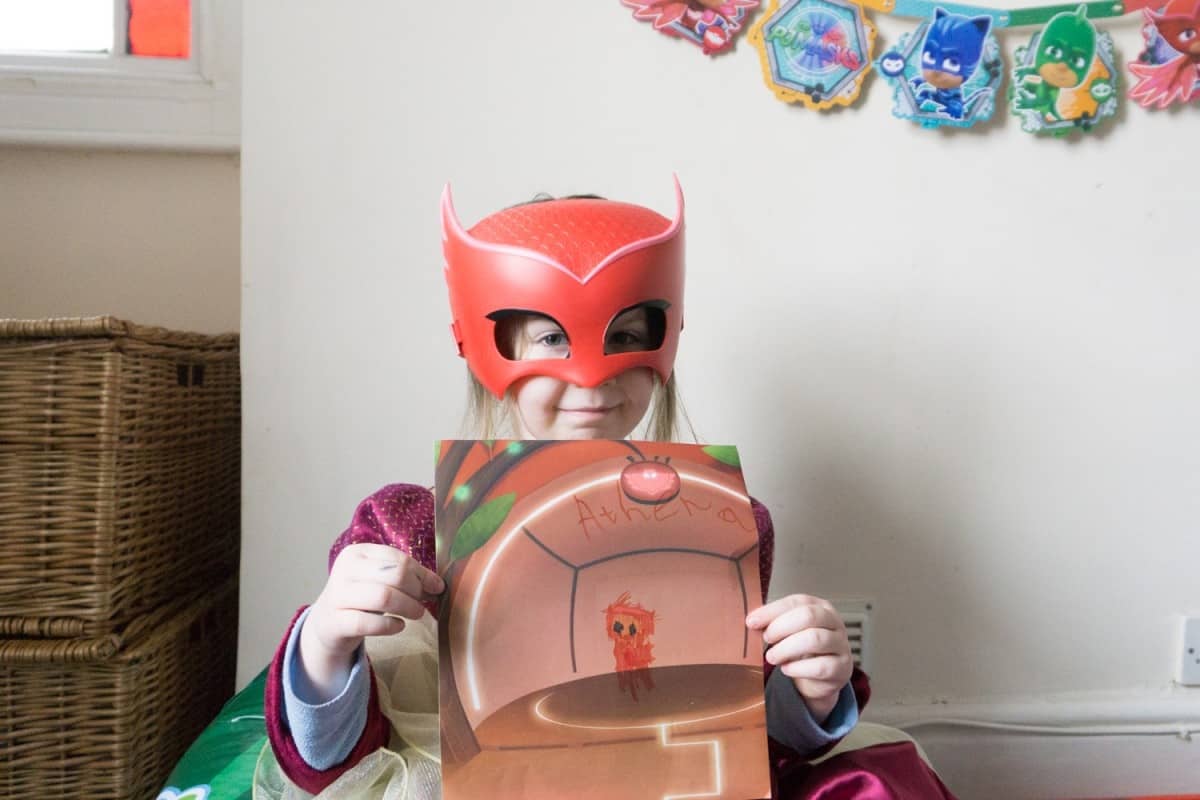