Doing – We have a tooth! It arrived without much of a to do and so far I haven’t used any teething gels, powders or medication. I can’t stand the idea of her having chemicals put in her unnecessarily and so far all she’s had is one shot of calpol after her first jabs. I am well aware that when the more painful teeth come through we will probably need to use something but until then natural is the way forward and i have ordered an amber anklet for her. Rolling is a new skill, although she’s not doing it a whole lot, she prefers to turn circles to get to where she wants to be, whether she is on her front or her back. The jumperoo is now the toy du’jour, and she can go for longer stretches at a time without getting frustrated in it, which is great for when I want to cook/clean/read etc! I think I need to re jig the toys hanging from the play mat as I think she’s getting a but bored of them. This puzzle toother toy is a popular thing to chew on and play with, as is this one as it can be cooled in the fridge, we bought them both from Wilkinson’s, along with the little Sophie giraffe thing, and I have to keep reminding Sam not to call them ‘chew toys’ like dogs have. Everything is being flung on the floor, though I don’t think it is on purpose (yet) 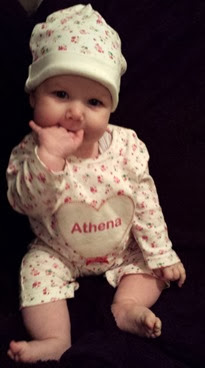 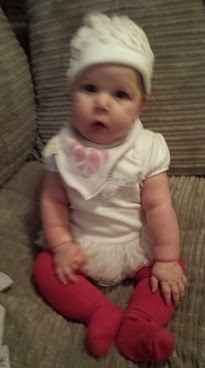 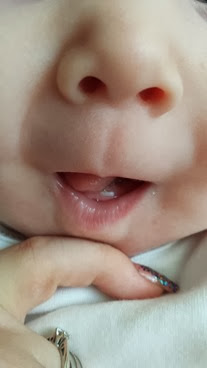 She is also sitting up unaided now, not for long periods of time but for a few minutes before she slowly slumps to one side (or face plants) and still loves to ‘stand’ on peoples laps with her chunky little legs. Her facial expressions are getting more and more developed (and amusing) and I am loving watching her look at new things and people. She’ll smile and giggle at anyone too, so hopefully that won’t get her into trouble later on in life!
We now use the pram in the seated mode, rather than carry cot style, as she’s just too big for it and was getting frustrated being on her back all the time. I still have her facing me so I can see what she’s up to but she can have a look around and I think looking at the world going by makes her a lot happier (and tires her out a bit more too!)
Sleeping – the supposed ‘4 & 5 month’ sleep regression is definitely happening. It probably doesn’t help much that we are living in someone else’s house for 2 weeks, so she’s not in her own cot like she is at home, and has been put back in her moses basket which is far smaller than what she is used to! Plus she’s been waking up so much that she’s generally just been sleeping in our bed when she wakes up after I’ve gone to bed. At the moment we have 3 or 4 night feeds, so we normally co sleep after the first night feed for ease. She’s been putting herself to sleep at 4.30-5pm for the last few days and I’ve tried keeping her awake but she just gets upset so I give in and let her sleep whenever. I’m all for baby led routines at the moment, it’s easier and it’s not like i’m at work and can’t cope on less sleep (I only ever used to sleep 5-6 hours a night anyway pre baby) so the lack of routine doesn’t bother me too much, i’m happy to take my lead from her sleep wise! I’ve been told when solids are introduced that sleeping can get better so we’ll see if things change. Currently I like that I can still go out and do things (have dinner with friends, take Athena to events with me etc) as I know when she is older then I really won’t be able to because it will be destructive to her routine, so i’m making the most of it!)
When we are back at home and the tooth isn’t giving her potential jip perhaps we’ll go back to ‘normal’ (which was one or maybe two feeds in the night). I’ve tried just rocking her back to sleep when she wakes up but only the boob will do. Daytime naps are still happening, 2 or 3 normally for varying lengths of time.
Feeding – Still breastfeeding, with no plans to start weaning until her 6 month birthday. I plan on doing baby led weaning after a week of mushed up stuff, as per the advice from my health visitor. She has had a taste of cream from the top of a hot chocolate, but was more interested in the teaspoon! 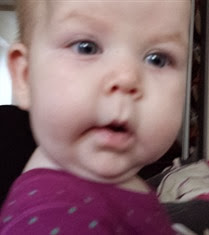 Size – she was weighed 2 weeks ago and was almost 17lbs so still along the same 50th percentile line. Still in size 3 nappies and is starting to grow out of some brands of 3-6 clothes, mostly the trousers as she has long legs and they end up being capri pants. I am still having to roll up the sleeves of some things though, so perhaps she’s got stubby arms! I’ve bound Tesco baby clothes tend to be smaller compared to most other brands, is it just me?

That’s about it for now, I have taken her proper 5 month ‘portrait’ but I don’t have the lead to get it off the camera to edit it! I’ll include it next time! and if you missed her Halloween costumes then click here!

One thought on “Athena’s 5 month update”