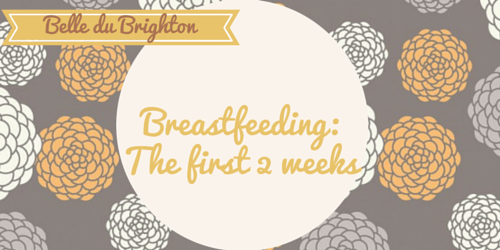 Arlo has just turned two weeks old so I thought now would be a good time to write about our experience of breastfeeding from his birth to now, as part of my role as a Medela Mum [You can read my other posts on breastfeeding here]

In the hospital he rooted for the breast and latched on (albeit clumsily and not that successfully) whilst we were still in the operating theatre (you can read my natural caesarean birth story here) which helped to let me body know to start producing colostrum. It was probably fairly painful but the delirium of having a new baby blocked it out! Once we were in recovery I put him to the other breast too. We fed on and off overnight and by the next morning my nipples were sore and the purelan 100 cream from the Medela essentials kit was being applied liberally after each feed! I remembered from the first time around to line the nipple up with the nose, so that baby has more of the areola beneath the nipple in their mouth than above, although remembering this tip didn’t make it any easier, and nor did the fact that I only stopped feeding Athena 6 months before Arlo arrived!

I was also having difficulty with getting him to latch onto my right boob, and spent time googling tips and tricks to help. Sam also reminded me of the ‘rugby ball’ hold which is when baby is under your arm rather than across your body, which means the approach the nipple from a different angle which can help. Arlo seems to have a much smaller mouth than I remember Athena having, but then she was 15 months when I last fed her and a much bigger baby so it’s hard to remember the newborn days with her! One of the midwives came to offer some support too, reminding me to ‘plant’ him firmly for each feed, though this method just seems to agitate him so I’ve stopped doing it.

On day three my milk came in and my boobs were like boulders, rock hard, really sensitive and three times their size! Thankfully the little one managed to empty them fairly quickly and they regulated in size, although I still had nipples that felt like he was digging tiny daggers into them as he fed for a good few days yet! I also got little scabs which took about 4 days to disappear.

Around day 10 I suddenly realised we had started to feed without me wincing in pain as he latched on, but I’m still applying the Purelan cream liberally after feeds and being topless as much as possible, so sleeping in an open night shirt and keeping my bra cups folded down when we’re at home without visitors. On Day 13 I had my first ‘leaky boob’ situation, which happened overnight thankfully and not out in public! I am making sure I have spare breast pads with me at all times in case it does happen again though!

However much it hurts though I am so glad that I’ve persevered as it really is such a special feeling to know that your body is creating everything your little one needs to grow and develop! 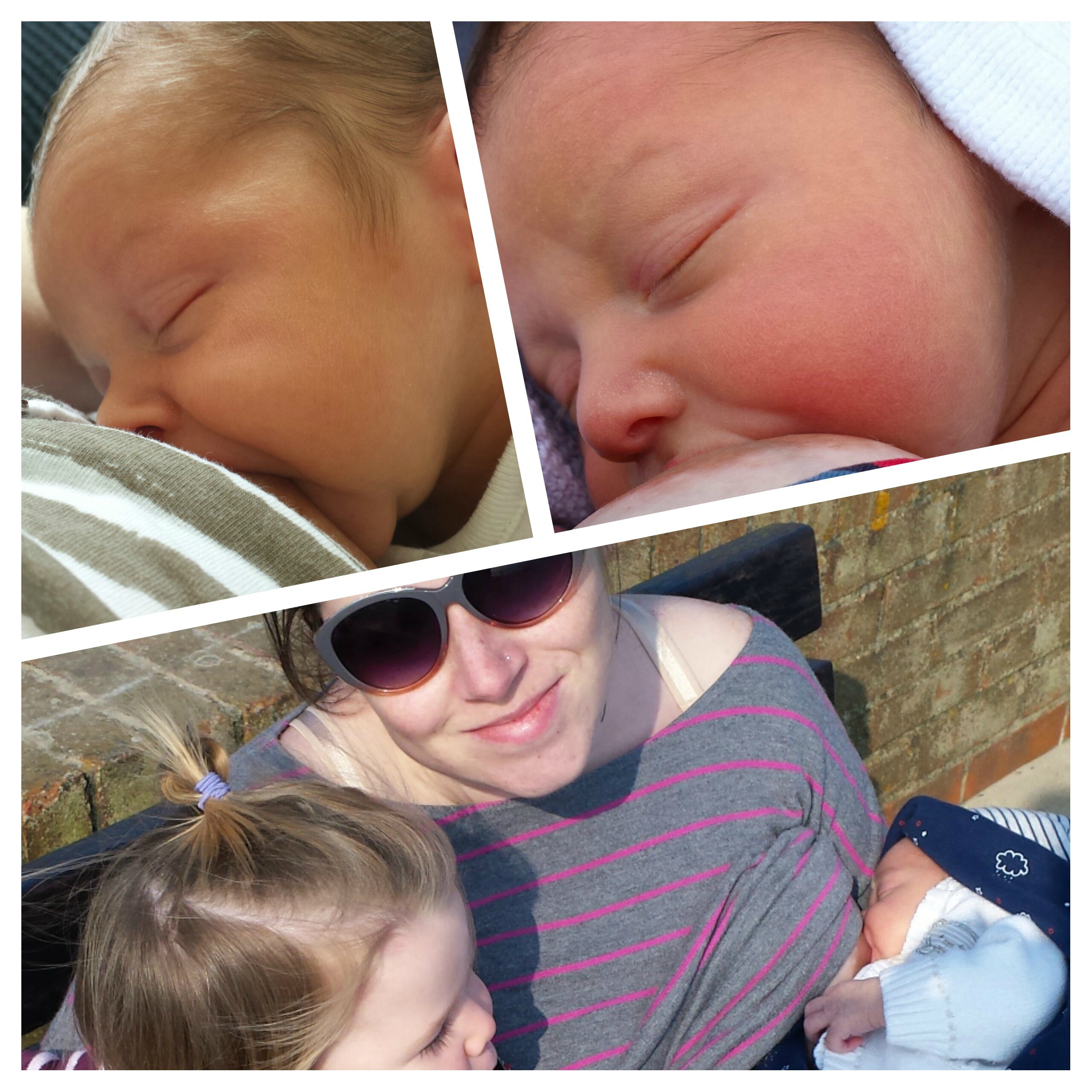 My tips to make it easier:
– play around with different positions, and make sure you have a lot of cushions and pillows about to prop your elbow/baby/arm up with. On the sofa I have a pillow from the bed to lay him on on my lap, and in bed I have my moon shaped pillow and a couple of sturdier feather cushions so that I can prop whichever elbow up overnight when I am too tired to sit upright properly
– Try (much easier in the day than overnight) to keep good posture when feeding, and sit supported as even though newborns are light sitting or standing in one position for too long takes it’s toll. During a day 10/11 growth spurt I did a fair amount of walking and feeding and really felt the ache later on! Serves me right for not stopping and sitting down, but when a baby needs a feed he needs a feed!
– Get your boobs in the air as much as possible, it’ll help your sore nips to heal, and use plenty of lanolin cream.
– Drink lots of water!
– If baby has latched on and it is really painful past the first few sucks then un-latch and try again, yes he’ll be frustrated but it’s always better to try and get a good latch otherwise your nipples will really suffer!
– If you get the chance and have the time, try and get baby to the boob before he gets really irate (not always possible for me as I have Athena to look after too) but it’s definitely easier to get a good latch when he’s not shouting about it first! 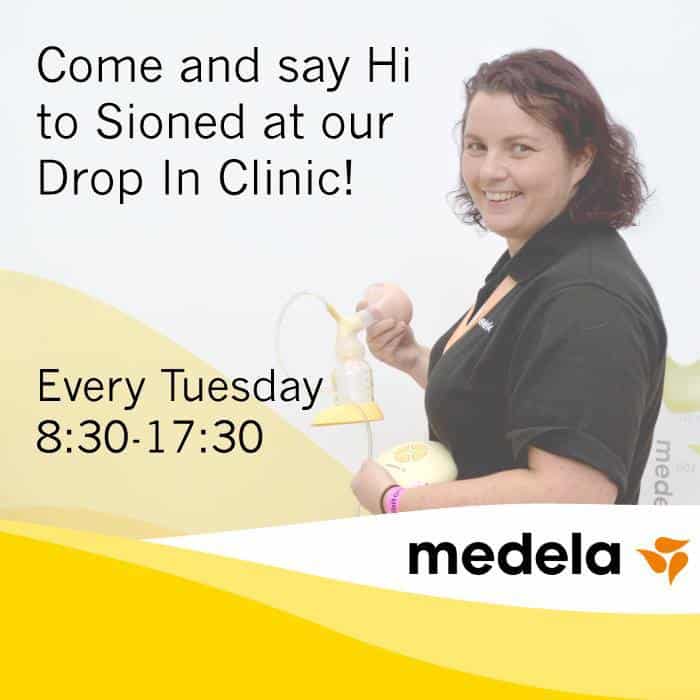 If you’re reading this and suffering, or have any questions then the Siobhan at Medela is always on hand on Tuesdays via their facebook page for help and advice, last week I asked a question about how to help get a good latch with full boobs as Arlo gets really fussy as my let down kicks in and then un-latches and Siobhan advised me to try hand expressing the release a little of the fullness so he could latch on properly, which definitely helps!

In a couple of weeks I’ll start expressing so that Sam can share feeds and I can spend some time one to one with Athena out of the house too, so I will keep you posted on how we get on with that! 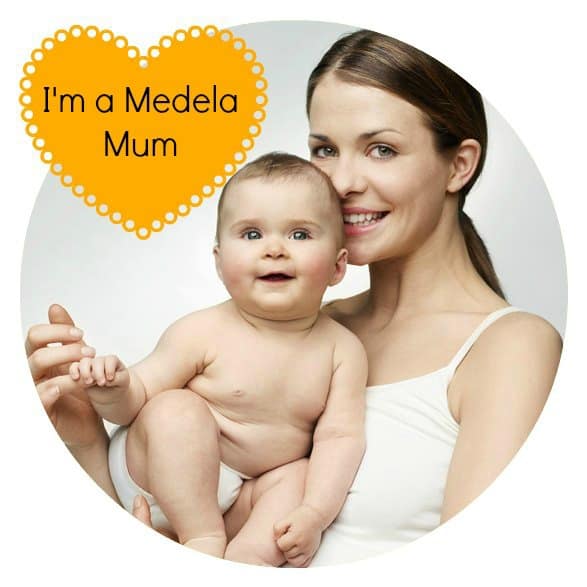