When teens express an interest in working in creative industries such as film, lots of parents get the wobbles. Is that a serious career option? Isn’t it massively insecure? Surely it’s not a proper job!

And the doubts don’t end there. Trouble is, for most parents the film industry is outside their experience. With no real idea of the range of jobs available, the growth potential for individuals, the earning power, or practicality, it can be hard for some parents to accept a creative-based career as a serious life pathway for their child.

So, what do you do when your movie-mad teen wants to pursue a career in the film industry?

These tips might help you answer some questions and see the choice in a positive light.

Let’s tackle this first. A lot of work within the screen industries is funded on a project-by-project basis, with many working as self-employed. But there are employment options too, so don’t let the thought of a teen heading into self-employment put you off.

Self-employment is rapidly becoming more common in the UK. A freelance career in the film industry can also offer creatives steady and consistent work.

Working for yourself does, however, demand certain business skills. So, while your teen is still in school, stress the importance of STEM (Science, Technology, Engineering, Maths) subjects since they apply to all areas of life and career, including those in the film-making industry.

Hand in hand with fears that a film career won’t provide a secure future goes the feeling that it’s not a proper job. The UK, however, has a world-wide reputation for outstanding film, TV, animation, and visual effects (VFX), not to mention its thriving games industry. The UK creative industries sector is growing, with around 12% working in film, TV, and related sectors, according to the Creatives Industry Council.

What’s more there’s currently a soaring demand for production crews in the UK, driven by the advent of streaming platforms and high-end television projects. The chronic skill shortage in the UK means that trained crews are more in need than ever. One recent analysis suggested the industry will be lacking an astonishing 40,000 workers to crew productions by 2025.

While sustaining a career in film might be challenging, it can be both lucrative and secure for someone with the right skillset and determination.

Do You Have to be Good at Art?

Not necessarily. The film industry, like any other, has a huge need for people with all kinds of skills, including lighting specialists, data analysts, human resources, accountants, writers, carpenters, stylists… the list is long and diverse.

Some movie-mad teens might just want to be behind a camera, or direct or produce. Others might aspire to screenwriting or simply being surrounded by and involved with the dynamic and vibrant atmosphere of film production. 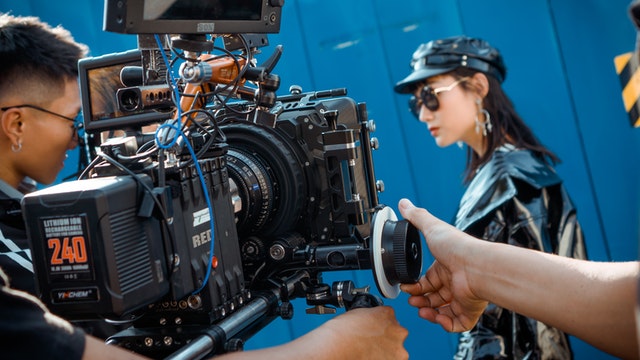 Is it all London Based?

A lot of the film industry is, but by no means all. Studying and learning filmmaking in London holds a lot of appeal to students around the globe. It presents the opportunity to be at the heart of the industry and work alongside many other filmmakers and those learning their craft. But beyond London, films are made all over the country. Not wishing to be permanently based in the capital should present no barrier.

We Don’t Know Anyone in the Film Industry

Everyone’s heard the phrase ‘it’s not what you know that matters, it’s who you know’, and it can be very off-putting when you’re considering stepping outside your comfort zone, such as by making a career in film your heart’s desire.

Yes, it helps to have a network of people within the industry who you can call on for advice or help, so encourage your teen to attend screen-based events. There are formal routes into the industry via apprenticeships and training schemes, as well as dedicated film study options such as through The London Film School, that offer interested people a way in and provide the perfect way to build those networks. A global network, once built, lasts a professional lifetime.

Information is widely available on film and creatives events, including sponsorships, training, scholarships and even short courses and workshops.

How To Support and Encourage

Get your movie-mad teen to start making their own short films if they’re not already doing so. They probably have all the basic equipment they need in their pocket, in the shape of their phone to get them used to framing shots, considering story lines and locations, roping in friends as actors and editing the scenes to seam the takes together into a watchable short movie. It would make a great summer holiday project.

At the same time, encourage them to think critically about the films, games, or TV programmes they love. Why do they like them, what engages them so deeply, can they think of ways to improve them? Could they replicate scenes and how or where would they start?

We mentioned previously the range of jobs in the industry, and one way to get more familiar with these is to pay attention to (and research) the job titles listed in the end credits. That can be an education by itself! What’s a gaffer, a focus puller or a foley artist for instance? At the same time, seek out and attend screen and film-based events. Chat to people there and ask plenty of questions. Networking can be powerful at any age for building up contacts.

To sum it all up, it can be daunting and a bit scary when a teen seems determined to step outside the mainstream box in their career choices. But a film career can lead them in many different directions and is a viable option that’s worth exploring.