My new food mixer has pipped the dishwasher to the top of my ‘inanimate household appliance’ love list. I was relaxing in the bath earlier this week when my husband got home from work, barged through the bathroom door struggling under the weight of a large box. “I’m trying to have a bath in peace” I said. “but LOOK!” he said and held the box up. It was at that point I got excited and squeezed too much face wash into my hand. It was a Creations Kitchen Machine (a poor mans Kitchen Aid, if you prefer) and only the day before I thought he was acting weirdly when we were in Argos and he poo-pooed the idea of getting a hand blender until I decided which food processor I wanted. I left in a bit of a huff but it turned out he’d already ordered this one for me! Now I am hugely glad he did because it took me almost 2 weeks to decide which kettle to buy (I must have read over 5 online reviews, seriously!) Having a baby has fried the decision making part of my brain I tell you! Anyway, he opened the box and assembled the machine on the bathroom floor! The below photo was taken from the bath, embarrassingly, but I was excited!

We tried it out the first night by making peanut & Nutella hot chocolate, and videoed it of course!

I’ve been attempting to decide what to get for ages, as now we’ve started weaning I really want to make as much of our own food as possible so I know exactly what I’m putting into my (not so) little baby! Excitingly I can make a lot more in the way of baked goods too (I got RSI when I made all the cakes for our engagement party, and got an achy arm doing the same for our wedding too from using a regular hand held whisk) 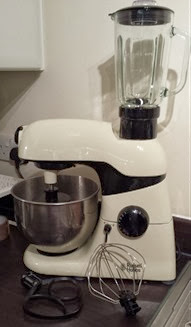 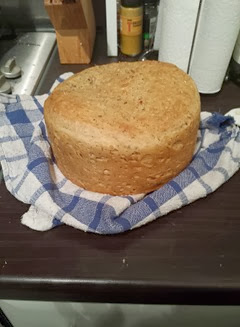 So in the 5 days that the mixer has been gracing my kitchen work top I’ve made 2 loaves of bread, and blended a load of carrots, sweet potato and spinach for Athena. I’ve also stood and stroked it a couple of times too whilst I waited for the kettle to boil. It matches our kettle and toaster which are also cream, and it has a dough hook, a large blending jug and you can get a spaghetti maker attachment too! I think my husband did a good job! I would like to point out that I do still have strong feelings for my dishwasher but for now this is my numero uno appliance, even though it is the baby of the kitchen appliance family!

2 thoughts on “In love with a food mixer”