Sam is on the hunt for new clothes, he says he’s fed up with wearing slogan T shirts with geeky things on (most of his T’s came from a subscription box that arrived every month with a T shirt, some pins and other random geeky stuff he never really use – so I’m quite pleased he’s stopped getting them!) and wants to smarten up a bit too. In the Summer he’s in shorts and T shirts but says he wants a smarter look for evenings and when it’s a bit colder too. When he starts teaching people to drive he can wear his own clothes but does need to be semi-smart! 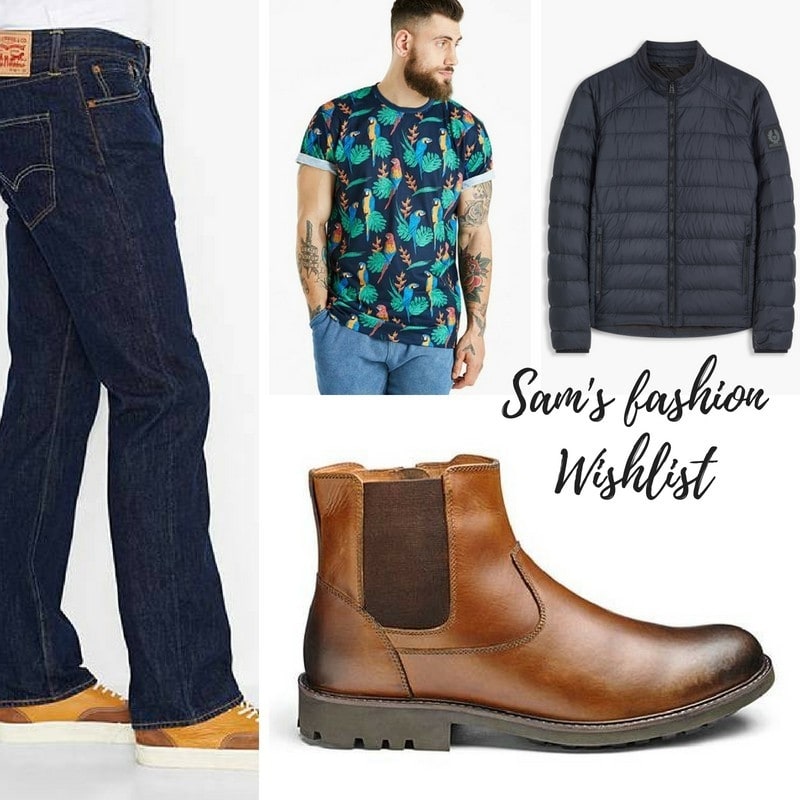 He’s put together an outfit from a few of his favourite stores and I really like it! The Levi’s are slightly more tailored than regular jeans, which I like, and the dark denim would go with most things he has, and probably make them look a bit smarter at the same time!

He picked a warm jacket as he currently layers up with hoodies, which aren’t so smart looking, and this padded down jacket for cooler evenings would be ideal, and better than him shivering by mid November as he did last year!

As well as picking himself a few plainer style rugby shirts and polo shirts he also chose a few more brightly styled T shirts much to my amazement! I really love this tropical parrot one, plus it comes in a longer length which is ideal for his 6’6″ frame! Floral was also featuring heavily too in his choices which I loved.

Finally some smarter Chelsea style boots, which look much less ‘workman’ than his timberland style boots do! I love the aged leather look of these and they look really comfortable too!

Does the man in your life have a specific style?