I’ve finally decided to get off my bum and do something about my fitness and how I look. I have the agility of a sloth, the endurance of a goldfish and according to the NHS Bmi calculator jobby I am obese. I mean, I beg to differ with that last one and am convinced that being short doesn’t work in my favour, but it still stung. I’m a size 14 and 5’3 and am rounded in all the wrong places, but I didn’t think I was obese… just pleasantly plump! Anyway, hopefully I won’t be for much longer as I am now a woman on a mission! I haven’t done any real exercise since I had Athena, almost 5 years ago. My wedding dress was a size 10, when I was pregnant with Athena, so I know I can reasonably be that size in adulthood. Admittedly I maintained that with doing 6 gym classes a week and a job managing a hotel with a lot of flights of stairs to run up and down each shift! But since I had kids I just gave up looking after myself. For over 3 years I was either pregnant or breastfeeding or both and took that an an excuse to scoff biscuits and cake and generally eat badly.

After dabbling with both Slimming World (I lost 9lbs in three weeks) and following a Ketogenic diet (I lost 7lbs in three weeks) I fell off the wagon after my trip to Israel in October and never climbed back on. I found all sorts of excuses; didn’t have time to exercise, didn’t have time to make meals from scratch, needed to treat myself with chocolate after a stressful day, couldn’t afford to go to weigh in groups etc etc I have finally given myself a good talking to, downloaded a Couch to 5k app and joined Weight Watchers online. Last week I even left the house in trainers and did a ‘run’ (okay, more of a jog) and I did another last night, and you know what? It wasn’t that bad. Nobody stared at me, the beach is a great place to go for a run!

Sam isn’t working weird hotel shifts, Arlo is in childcare 5 days a week now so I really have no excuse, I have the time and Sam is happy to join me in eating Weight Watchers meals. No obstacles! 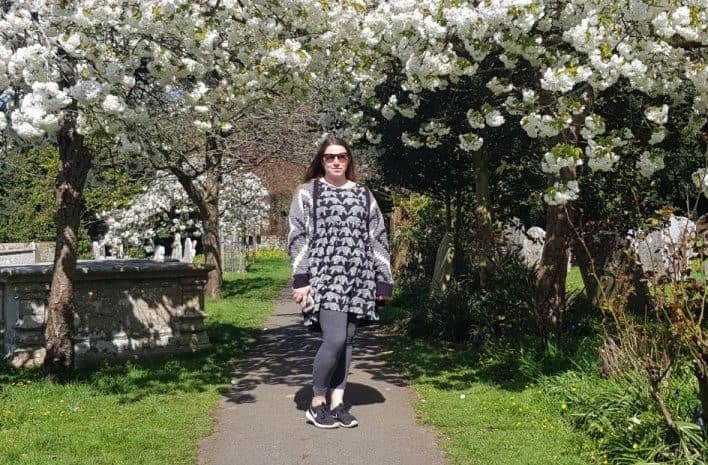 So this is me now, admittedly it’s not a great photo in terms of being able to tell what I really look like but I am so reluctant to get in front of the camera without a kid in front of me that I can’t find any recent ones. And that’s why I want to change, I don’t want to avoid the camera lens, I don’t want to be huffing and puffing if I have to break into a run, and rather selfishly I’d really like to buy a whole new set of clothes!

To try and keep myself on track I plan to do an update every two weeks with my stats and what I’ve been doing progress wise, so here’s week one:

So there we go- wish me luck and if you see me eating a biscuit you have permission to take it off me and tell me to sort it out!