We spent last weekend at our first festival since 2019, Black Deer Festival in Eridge Deer Park in Kent. It was a weekend full of fun, music, food and relaxing together outdoors. Here’s a rundown of our weekend of festival fun! 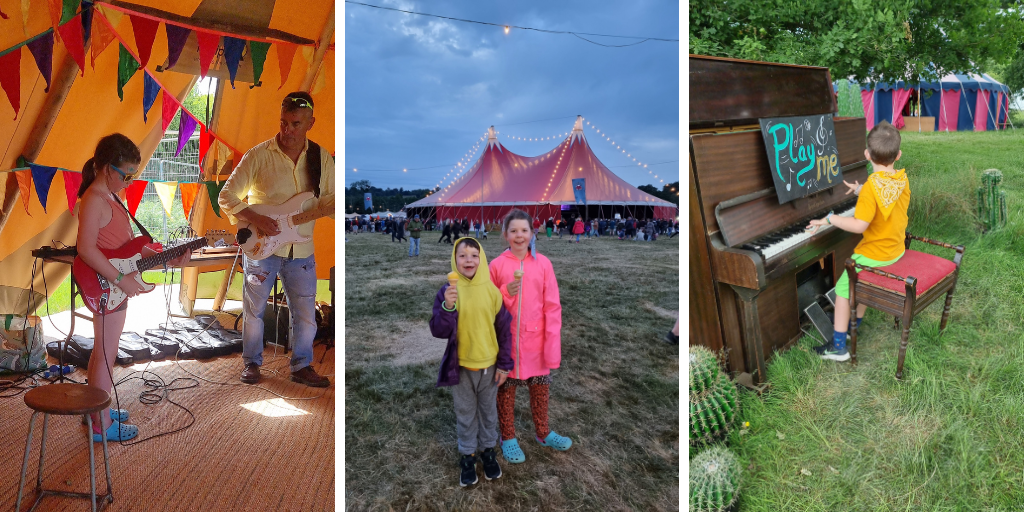 We jumped around James and Jake Bugg; sang along  with Van Morrison & The Waterboys; laughed along with The Cuban Brothers and even worshipped with the Powerhouse Gospel choir on Sunday Morning.  There are several different stages, Main Stage, The Ridge (which is the circus looking tent), Haleys Bar & The Roadhouse and then in The Yard you have the Supajam stage. There’s also a premium adults only area called Jackson Social that has a stage too. 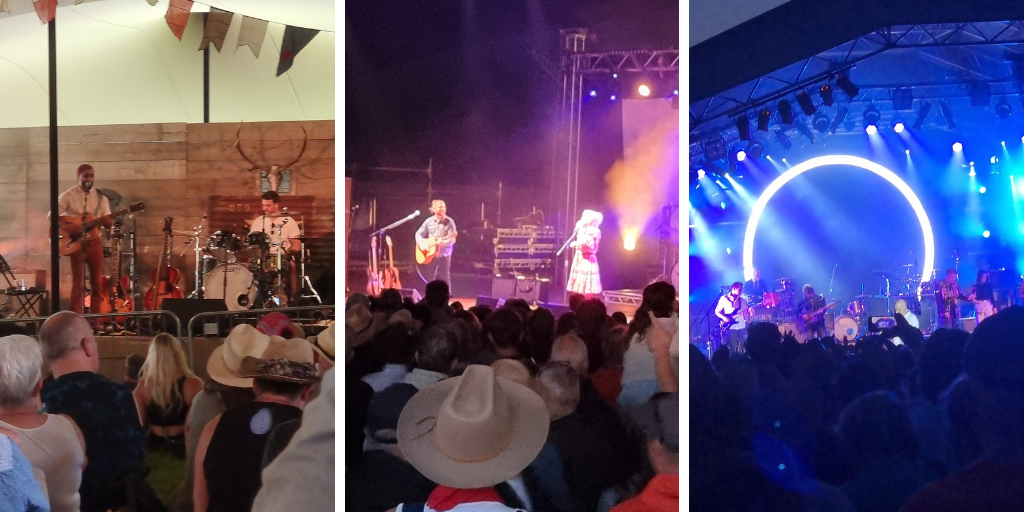 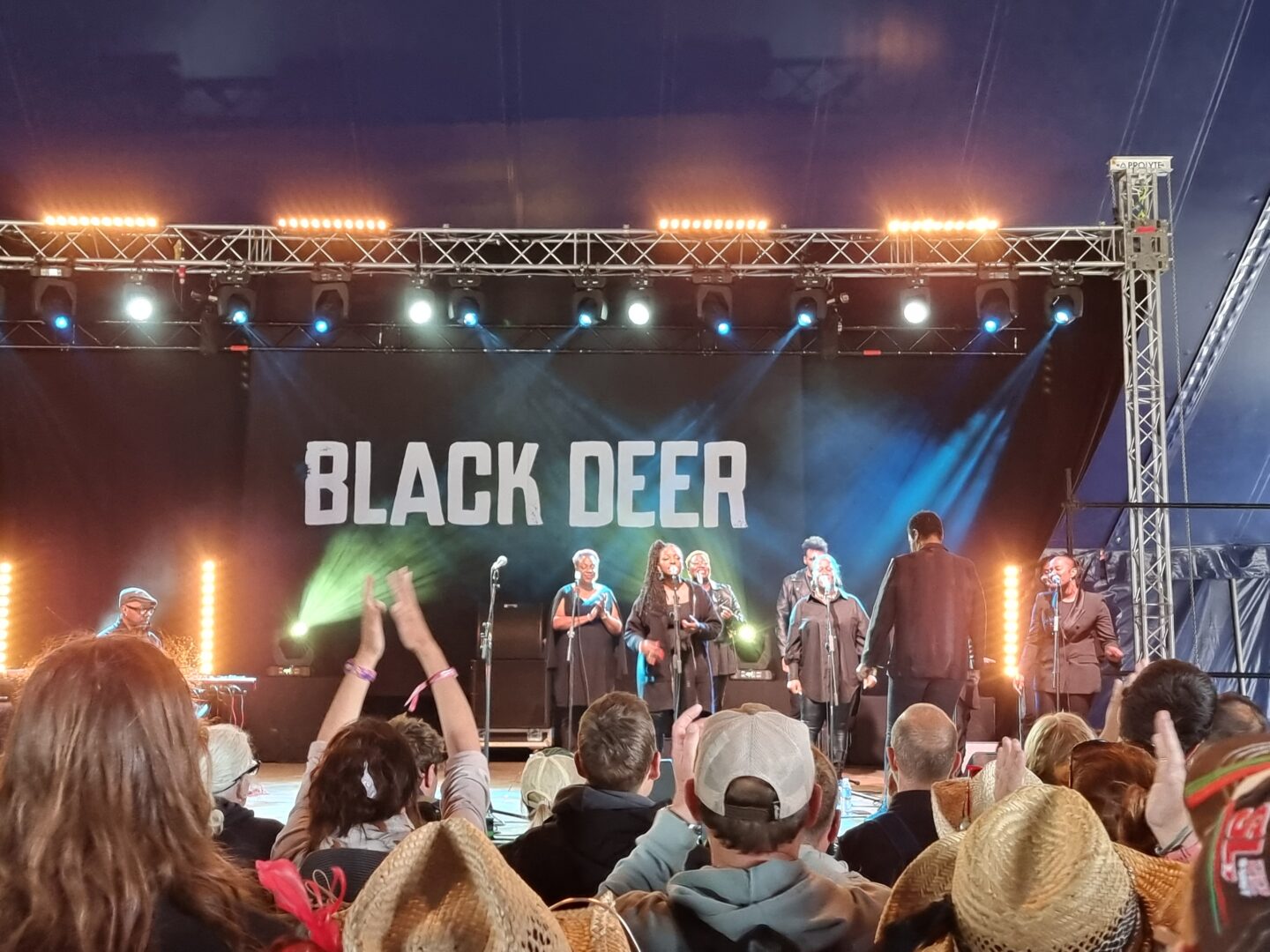 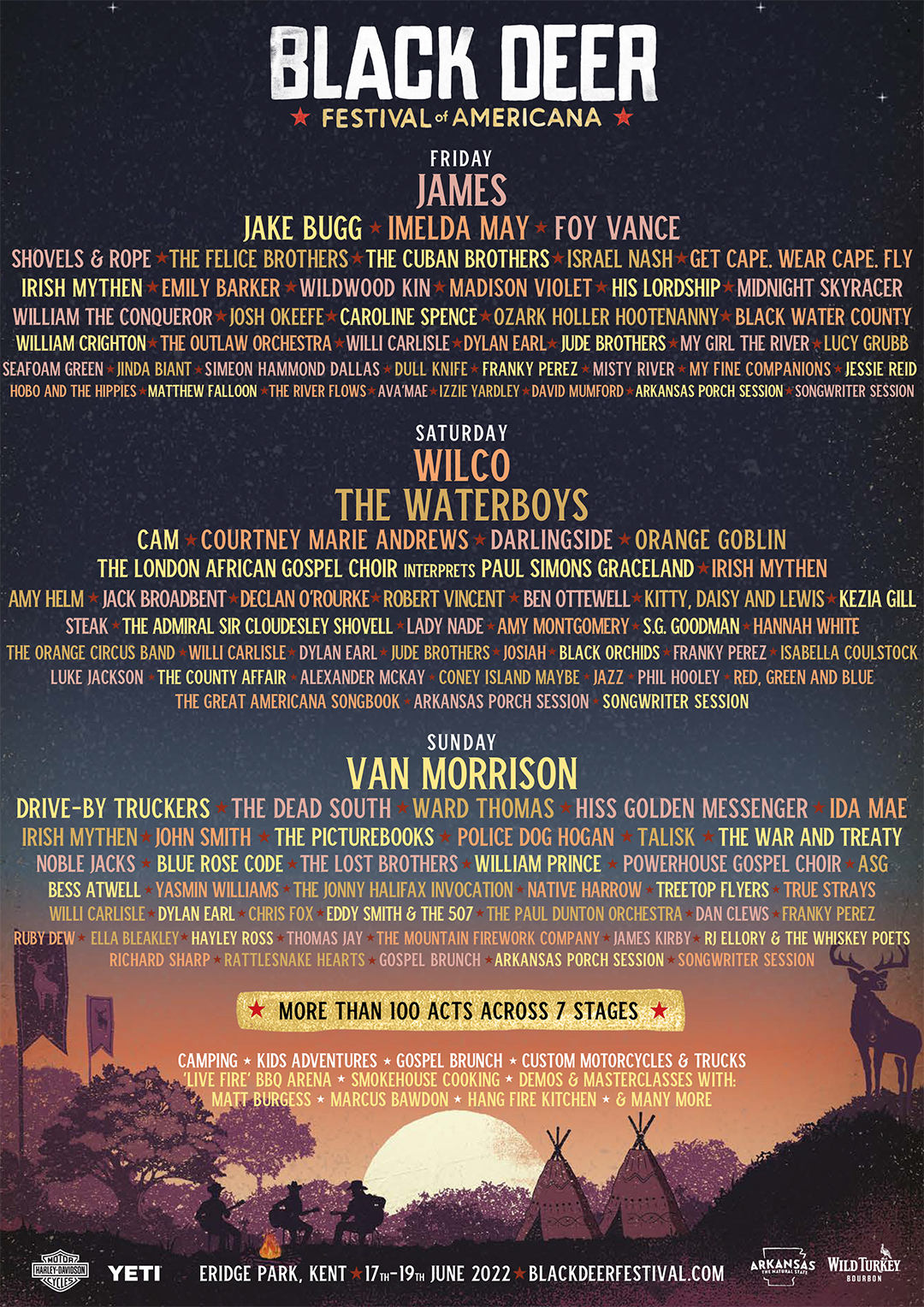 A way of life rooted in, and respectful of, the cultural heritage of America – a movement that’s become known as ‘Americana’.
Americana is a world that at times can be gritty and raw, with a rusty edge. Yet also effortlessly cool due to the passionate sub-cultures that exist. Most important of all, is that it’s a world in which anything less than authentic isn’t tolerated. 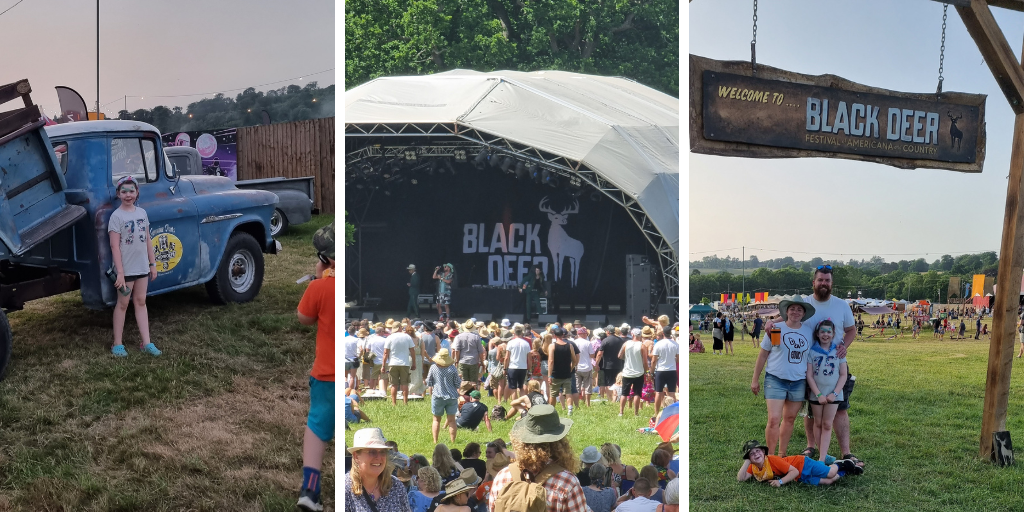 Black Deer was Americana through and through! Vintage American vehicles dotted about, Harley Davidson displaying current and vintage bikes, with a chance to ride one on a moving road, Visit Arkansas had a lovely area where we had a chat about ‘The Natural State’, watched footage of areas to visit and saw some great live acoustic singers over the weekend who had come over from Arkansas especially. The food, the stalls selling vintage Levis, plaid shirts and cowboy hats, the decor and so much more.

The Young Folk area had so much to do, some needed to be booked in advance, and some things had an added charge. If you’re there for the full weekend I suggest doing as much as possible on the Friday daytime when there are less kids about, as some of the activities booked up on the Saturday and Sunday. 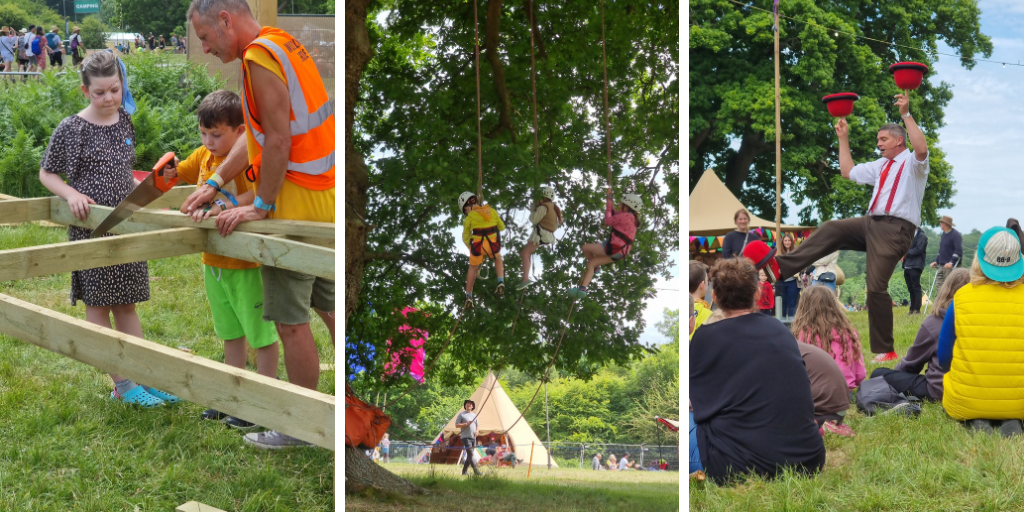 We had harmonica and guitar lessons, played cowboy dress up, visited the slacklining area (many multiple times) sifted for ‘gold’, painted rocks, played giant jenga & ping pong, swung from trees, climbed up tress in harnesses and spent time build giant wooden carts in the amazing Woodland Tribe Area. Out of all this we only had to pay for the rope tree climbing! 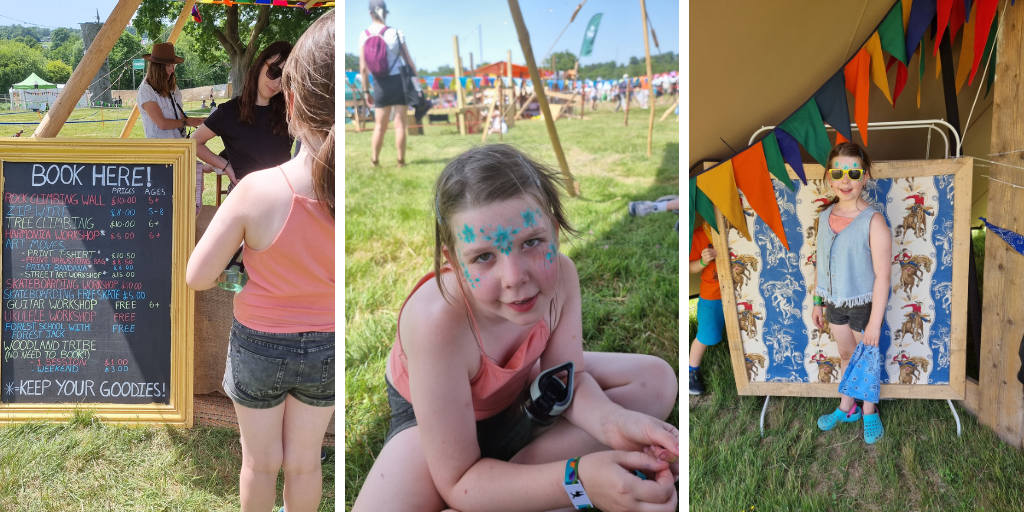 Helpfully the Young Folk area is next to the main arena stage so you could listen to the main acts and watch your kids climbing trees at the same time, perfect!

Lots and lots of variety, definitely something to suit all tastes. We had pizza, hot dogs, loaded fries, pulled pork and lots more. We scoffed churros, mini pancakes and ice cream. Expect to spend around £10 per person on a meal, on average – our kids shared an adult portion. The food stalls were dotted about the arena, with some in the campsite too for a cooked breakfast or toasty, plus a proper coffee stand. 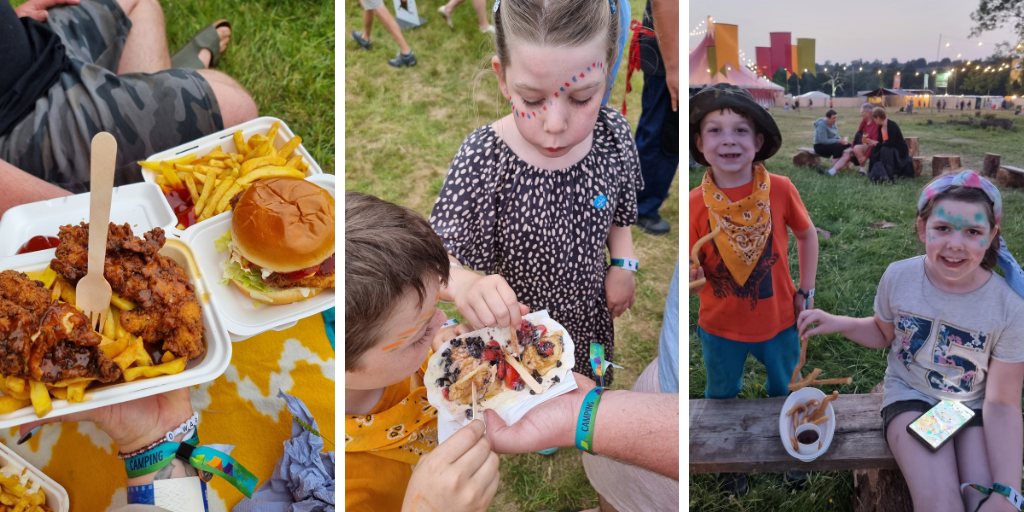 As well as all the awesome food to consume there were cooking masterclasses on the Live Fire stage, cooking classes available, plus hot dog & chilli eating contests, which were very entertaining!

There were various camping options available, from pre pitched tents, yurts and wooden caravans, the option to bring your own live in vehicle and also ‘fancy camping’ which was effectively a pop up hotel, with concierge, late night bar, pampering facilities and more. We however brought our own tent and were very comfortable in the general campsite. We arrived around 9.15 on Friday morning so there was plenty of choice as to where we pitched our tent on the sloping campsite. We were about 3 minutes walk to the toilets and showers and entrance to the festival arena. There was a specific area for BBQs but we had a little gas stove so could boil water and fry sausages at our tent.  The walk from the carpark to the entrance to the campsite was up and over a hill and took about 15 minutes each way – our trolley came in very very handy!

What we really loved

What could be Improved

We would definitely visit again, we all loved our time in the deer park and as festivals go it’s really great one for families, of all ages! You can buy earlybird tickets for 2023 already, and sign up for updates at the Black Deer Festival website, as well as following them on Instagram