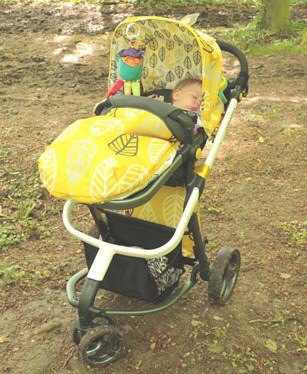 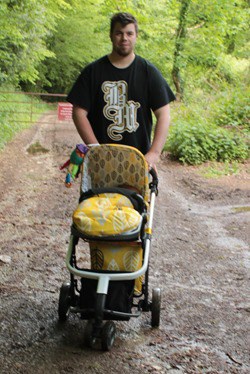 On Easter Monday after suffering from three days of excruciating tooth ache I was gobsmacked for another reason, I found out I had won a Cosatto Giggle on Frithas blog Tigerlily Quinn ! I was over the moon, as you can imagine!

We’ve now been using our Giggle for three months so I thought I’d write a review in case anyone is thinking of buying one, and in fact my friend Laura has just bought one in Treet for her new addition arriving in September after seeing mine!

Okay, so the Giggle comes with a seat unit and a carry-cot, and is compatible with the hold car seat, which comes in a matching print! Obviously Athena is a little too big to be squished into the cot and car seat but we’ve kept them safely for when baby #2 arrives at some point in the future! We have however put the Giggle in pushchair mode through its paces! I won the Giggle in Oaker, which is a bright yellow pattern with grey and silvery leaf outline. I’ll admit it wouldn’t have been the pattern I was first drawn to, but I love it now we’ve got it! We’ve had lots of people say how lovely and bright it is, and would suit a boy too, in the future!

I prefer to have Athena facing me, and in this mode you can have the seat unit bolt upright, if it is facing outwards it is slightly reclined in its most upright position, and in both directions it has several more reclines including lay-flat. You change the angle by simply pushing the yellow buttons on either side in at the same time and pushing the seat forwards or backwards. This was a bit stiff at first but has loosened up since we’ve started using it more.

The handlebar doesn’t extend but can be used at several angles, I use it in line with the chassis but Sam has it in the highest position which is perfect for him at 6’6”. Being a man with gigantic size 15 feet he does sometimes hit the brake with his feet when he’s pushing, but I never have done so it’s not really a huge issue. The brake is an easy on/off pedal in the centre of the lower bar, and you don’t need to flip it up with the top of your foot, you push down on it so can do it in flip flops, hurrah! It has never once not locked either, so no fear of a run away.

The seat unit comes with a cosy toes which attaches at the top with velcro loops and fits over the bumper-bar so no slippage (an annoying problem with my previous O’baby pram) plus it is reversible so you can have a choice of patterns, and the top part zips off fully. Now it’s warmer we’ve taken the top off but use the bottom as a liner for extra comfort. Also included are chest pads for the safety harness and a changing bag (complete with changing mat and key ring tag) in the same design, perfect! The hood has an SPF of 50 to protect little snoozers and has the coordinating pattern inside, along with two loops on the edge of the hood to attach toys to. 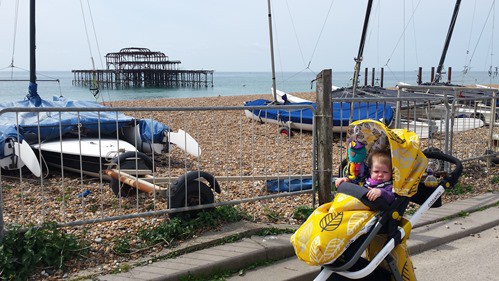 This is the first three-wheeler we’ve had, and along with a tiddly turning circle it is easy to push and steer, I’ve just found that I have to go up kerbs straight on and not at an angle like I could with a 4 wheel buggy. You can lock the front wheels for bumpier terrains, but I never actually have needed to yet, grass and gravel are fine to push on with them unlocked!

Folding is literally a piece of cake, and the folded size is SO much more compact than our previous travel system. It’s so easy to do, with the seat unit facing outwards you don’t need to remove it either. Unfolding is just as simple, pull the safety lock out and it springs to life. The major bonus us that it is SO lightweight that I can pop it in and out of the boot of the car with ease, even if I am holding Athena with one arm! 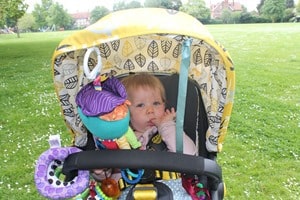 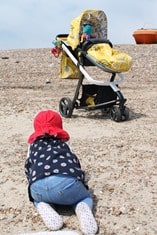 The basket is deeper than it is long, but I can fit the changing bag in it easily plus normally a lunch box and a bottle of water. It can unclip at the front for ease of access too. If you have your baby forward facing when it can be a bit tricky to get things in and out, so this feature really helps. If you’ve got your baby facing you then you have easy access to the basket and can stack things up in it with ease.

I was going to say that I think the bumper bar needs improving as it’s foam covered and gets sticky quickly but I have since been told (thanks Chelle!) that there are two bars in the travel system, one of which has a zip off cover which I have obviously overlooked and is now in storage in my mums garage with the carry cot, whoops! So now I know that exists, no issues with the bumper bar, it hinges open on either side so you can take it off easily or just open it whichever side your little sprog wants to climb out! 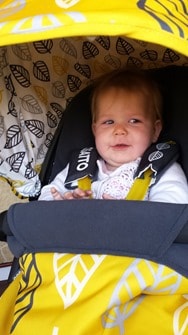 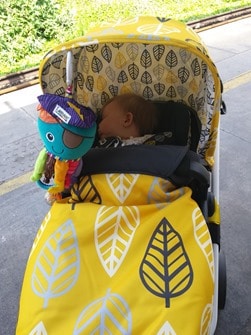 The one thing that bugs me is that the shoulder pads can slip off easily when you undo the harness (as the shoulder strap and waist strap clip together to go into the buckle) and when my mum had Athena for the day on Wednesday she’s managed to lose one as it must’ve slipped off and she didn’t notice! I think they could be improved by being wrap around and attached by velcro for a closer fit.

The only other improvement I can think of is that I am not sure if Athena will last in this till she no longer needs a pushchair (another 2 years potentially) height wise, as her head is fairly near the top of the seat, however I’ve looked up a few other reviews and seen children of 2+ using it. Yes their head is higher than the top of the seat but still not touching the hood. I’d just worry about how comfortable napping would be. I do need to bear in mind that’s a long way off and that I have a very tall baby though!

As with all Cosatto products you get a 4 year (FOUR YEARS!) warranty as long as you register the product within 28 days of purchase. There is a label on the pushchair with the contact details for repairs/spares etc too. Cosatto sell several different styles of pushchairs, high chairs and car seats too…I’ve now got my sights set on the Zowee car seat, but Sam saw what I was looking at said he preferred the Scootle style! There are just too many choices! 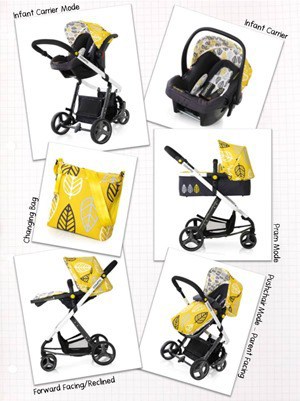 You can view the full range of Cosatto pushchairs here, complete with brand new designs that have just launched! If you follow them on facebook you can keep up to date with all their news and fancy new designs!

Disclaimer: I won my Giggle, and obviously am under no obligation to write about it, but I wanted to so I did!