Now that I’m in my 30’s when it comes to friends birthdays my friendship group tend to club together to get the birthday boy/girl a more expensive gift. Something that they either want or will actually use rather than lots of little presents that they don’t necessarily need. This works well because everyone is happy that they are getting/given something, and most people just have to hand over money leaving one person doing the buying. However the problem is that we often don’t actually get together very often, so don’t actually see each other as much as we did when we were younger due to families, jobs, and moving away etc. This means that there is often some shuffling of £10 notes around under the table so the giftee doesn’t see what you’re up to, but the present buyer gets the money! Leetchi.com is a new platform that eradicates this problem! It’s free to create a money pot and makes collecting money for any occasion so easy.

It’s free to download and use and makes collecting money for any occasion so easy. 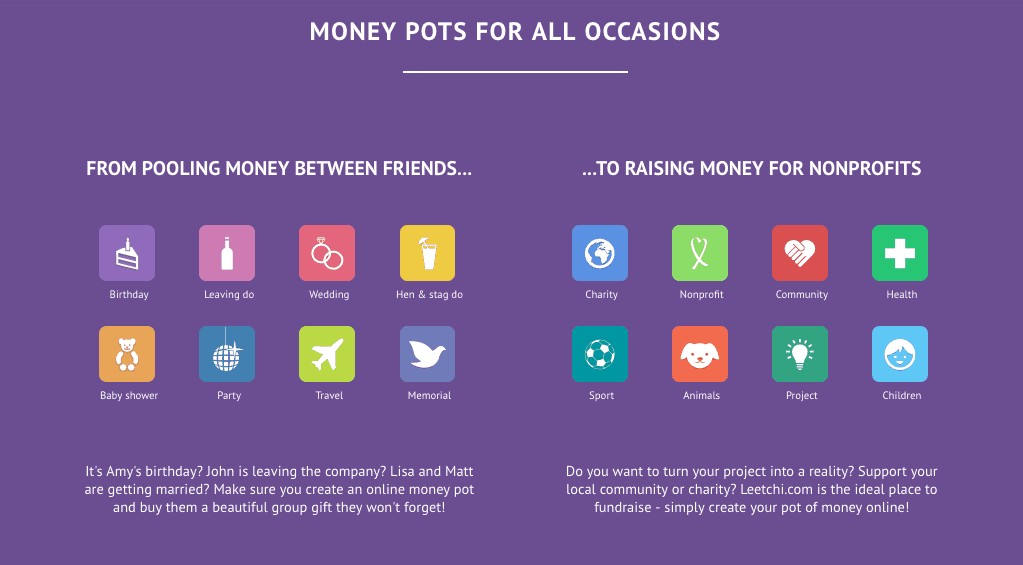 In a recent YouGov study, 1 in 3 Brits said that money causes frequent issues between friends and family. 36% of people say they feel uncomfortable discussing money with their friends, I’m one of those! 35% of people have encountered problems getting their money back when lending to their friends. Leetchi offers a solution to all these problems, and has now launched in the UK after being a leading European service, with  million users in 150 countries.

You can set up a ‘money pot’ for any reason, then invite friends/family/colleagues to add to it. Once you’ve got enough money you can spend it directly with some partner retailers (such as Amazon) send it directly to the recipient or withdraw it yourself. It would be an amazing and easy was to get people involved in charity fundraising projects for the local community too, for example playgroup funds could right in per parent attending and then you could buy toys or books for the group directly on Amazon.

If you had an amazing idea for a business you could even run a kickstarter or crowdfunding campaign with it! Anyone you invite can pay money in directly with their bank card, and personally this would be a lot easier than me having people pay me via paypal as I use that for work, so don’t like having personal payments go in or come out of it because it makes balancing my books ten times harder when I have to weed these out. Leetchi also shows the contributors the total amount in the pot, and what the money will be used for.

This is a collaborative post, all words and opinions are my own.