It really is true that Christmas is more magical with kids about. For most of my twenties I worked over Christmas, maybe having the 25th off itself, but it didn’t really bother me anyway as Christmas just isn’t that much of a big deal when you’ve not got a huge family or kids I don’t think! I do have really fond memories of my own childhood Christmases, and the one good thing about being an only child is that all the attention is on you! No having to share, or getting jealous if someone gets something you wanted! I think the one toy that really sticks out in my mind as being something that absolutely amazed me, and made my Christmas was the year that I got a Sylvanian Family Caravan. 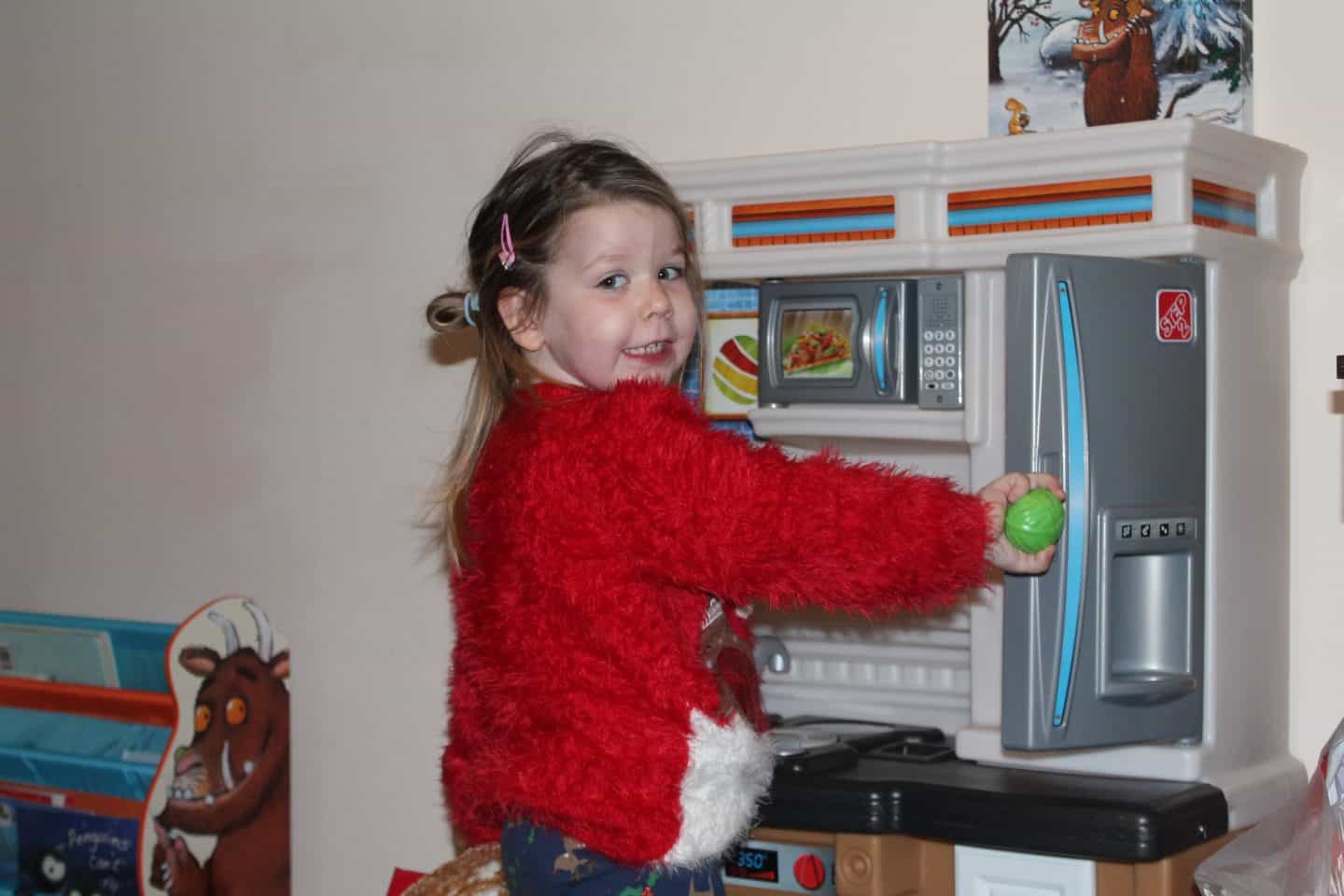 I played with that for years, and my mum thinks she still has it somewhere to pass on to Athena! I think I’d play with it more than her if it came back into my possession! I remember being allowed to pick one present from under the tree to open on Christmas eve, as per our family tradition. I chose this one (probably because it was a big box!) and was told that was the one present that had to wait till Christmas day. I was a bit annoyed but knowing that whatever it is was really special. I’d have been about 7 or 8 I think, still in the days when I woke up super early on Christmas day to rip open the stocking presents at the end of the bed, and that wait for my mum to wake up and come down and make herself a cup of coffee before we were allowed to open the gifts was agony! It was worth the wait though as I played with that caravan day in day out for yonks! I have such fond memories of Christmas when I was little, and want to make sure my two do when they’re in their thirties! I managed to dig out a Christmas picture of me when I was about four, it’s at the end of the post if you fancy a giggle! 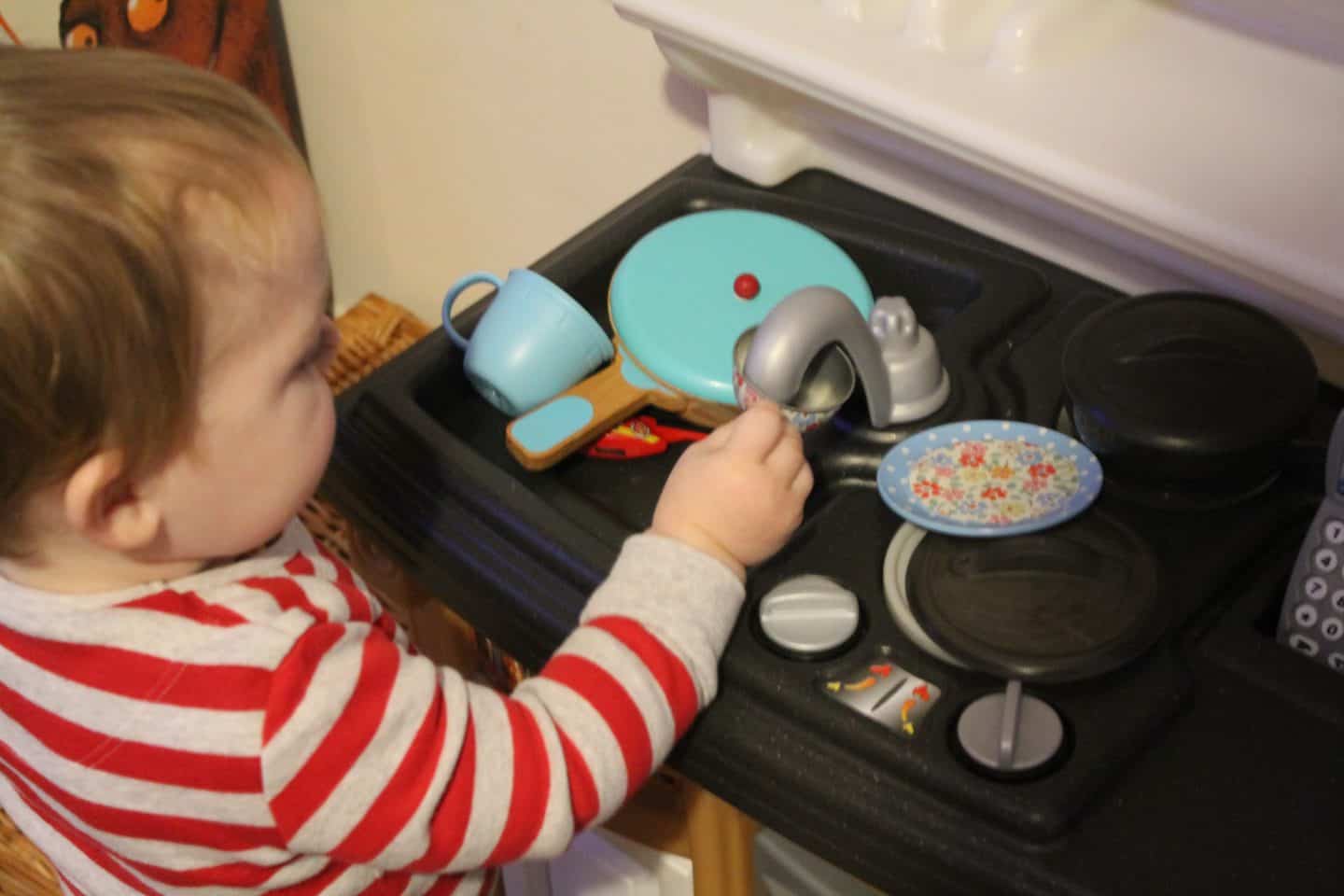 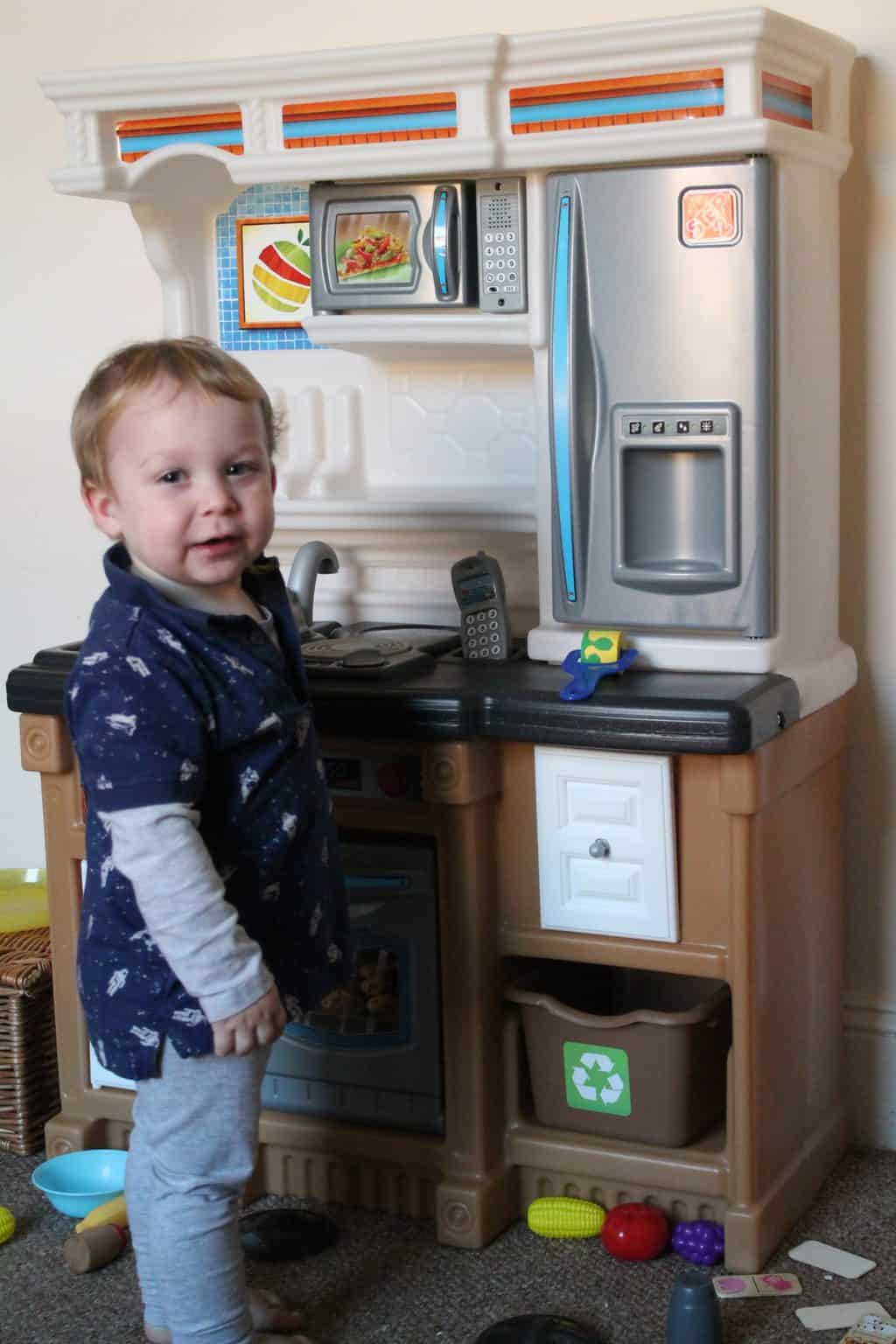 The Early Learning Centre decided to help us to make amazing memories this Christmas by sending my two lucky little ones an early gift! All I knew was that they were going to send a present for them, so when our neighbour knocked on our door to let us know there was a very large box waiting for us but that we may want to hide it from the kids I was intrigued! Lo and behold we’d been sent a fantastic play kitchen for them! We set it up in the evening once they were both in bed, and their faces when they saw it the next morning were a picture! Over the moon is an understatement I think! Immediately the got to work opening cupboard doors, digging out play food and chatting on the phone! I’ve been served endless cups of tea and meals consisting of various different ingredients. I think the oddest one so far is a sweetcorn, grape and cheese medley! Athena even likes to do the ‘washing up’ after a meal! The Step2 kitchen has everything you’d want in a modern kitchen, including an ice dispenser on the fridge and a recycling bin! It has lots of storage space too for food and cooking utensils so at the end of the day it’s easy enough to tidy it up, not that the kids often help with that! 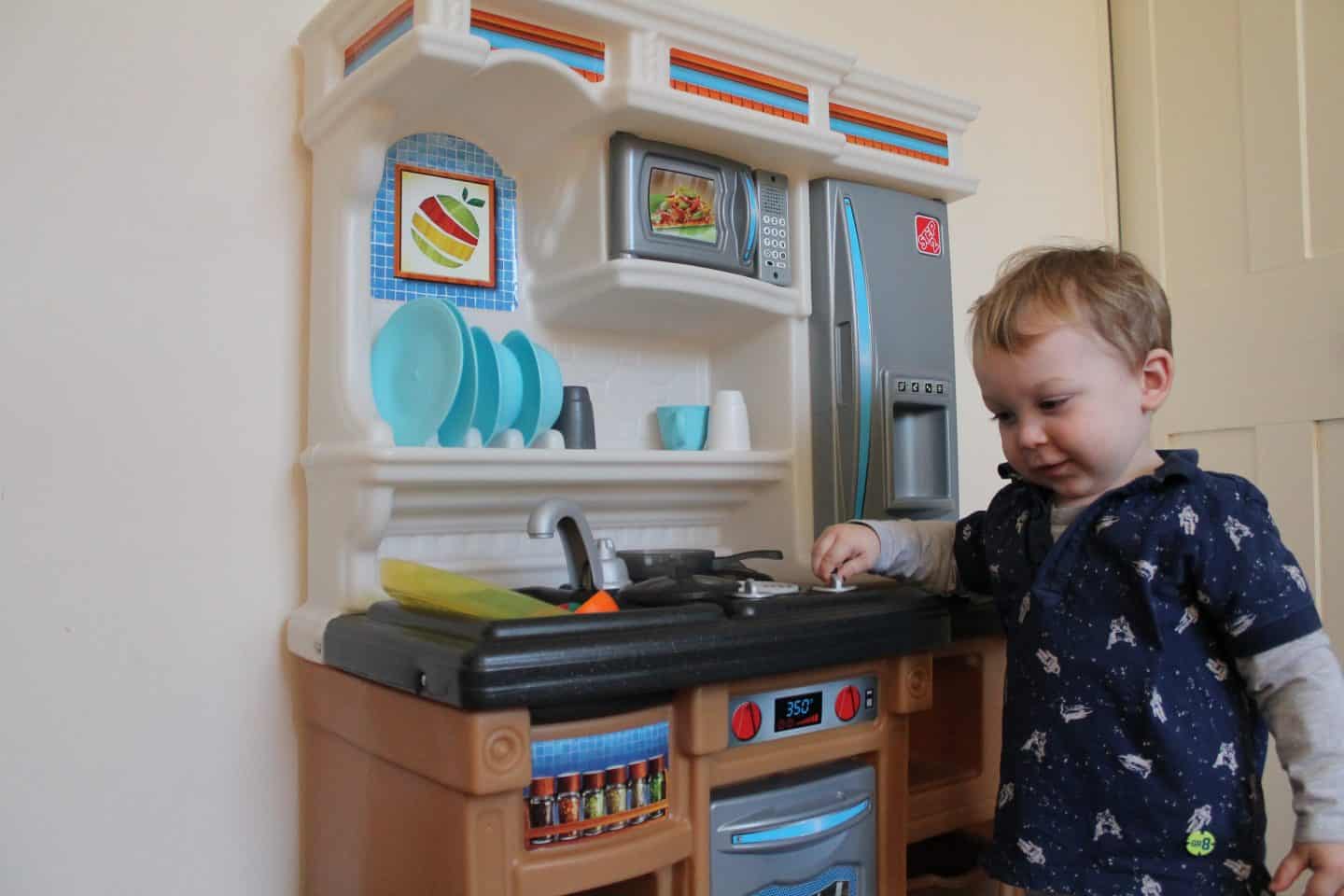 The play kitchen is the perfect size, both Athena and Arlo can stand at the kitchen playing without getting in each others way, perfect for some sibling bonding! I can see it being a firm fixture for a good few years to come! The hob, microwave and phone all have working noisy buttons or lights which of course makes it even more fun for them to play with! It was really simple to put together, it took Sam and I about twenty minutes, including sticking all the stickers in the right places and as neatly as possible! 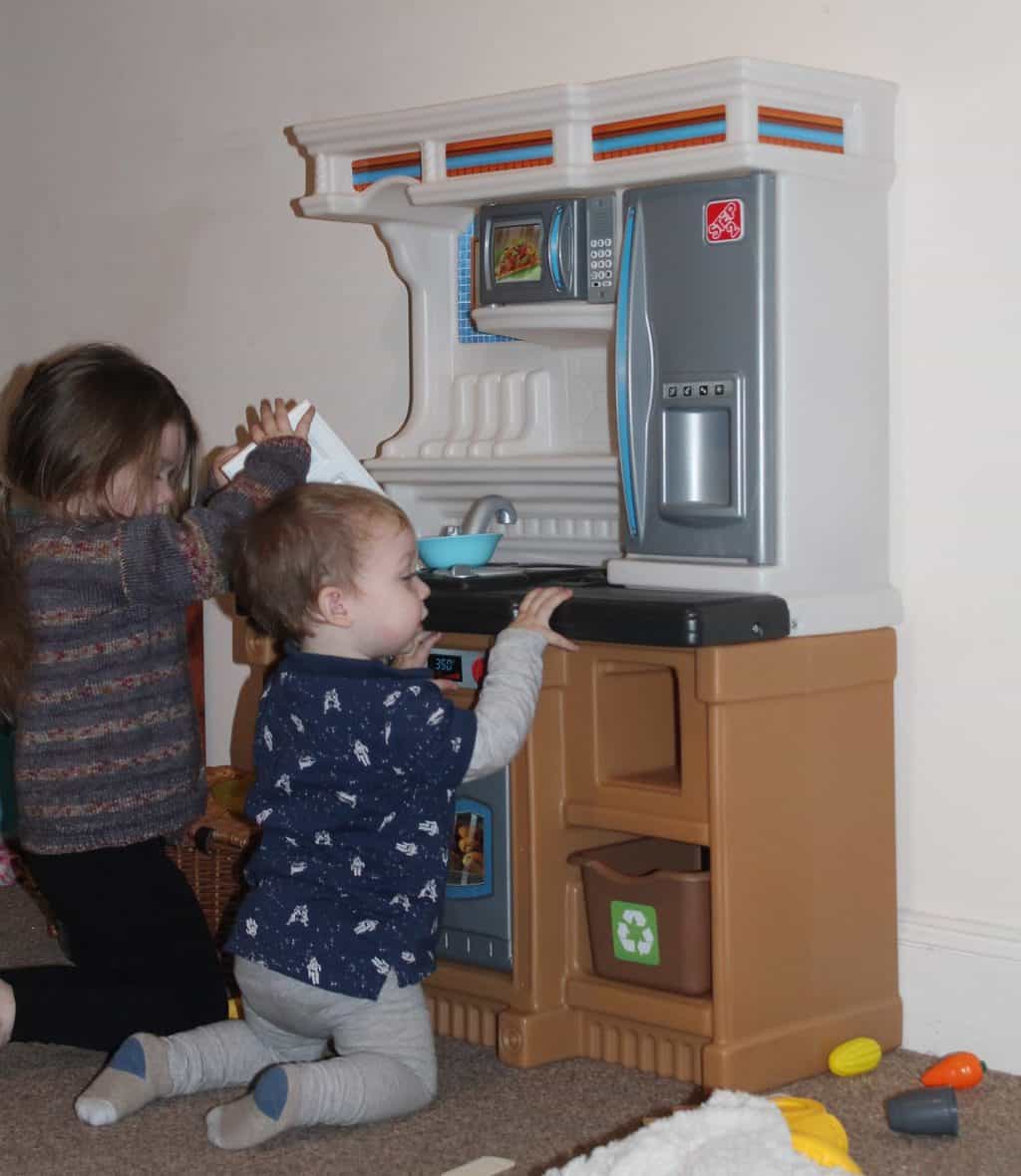 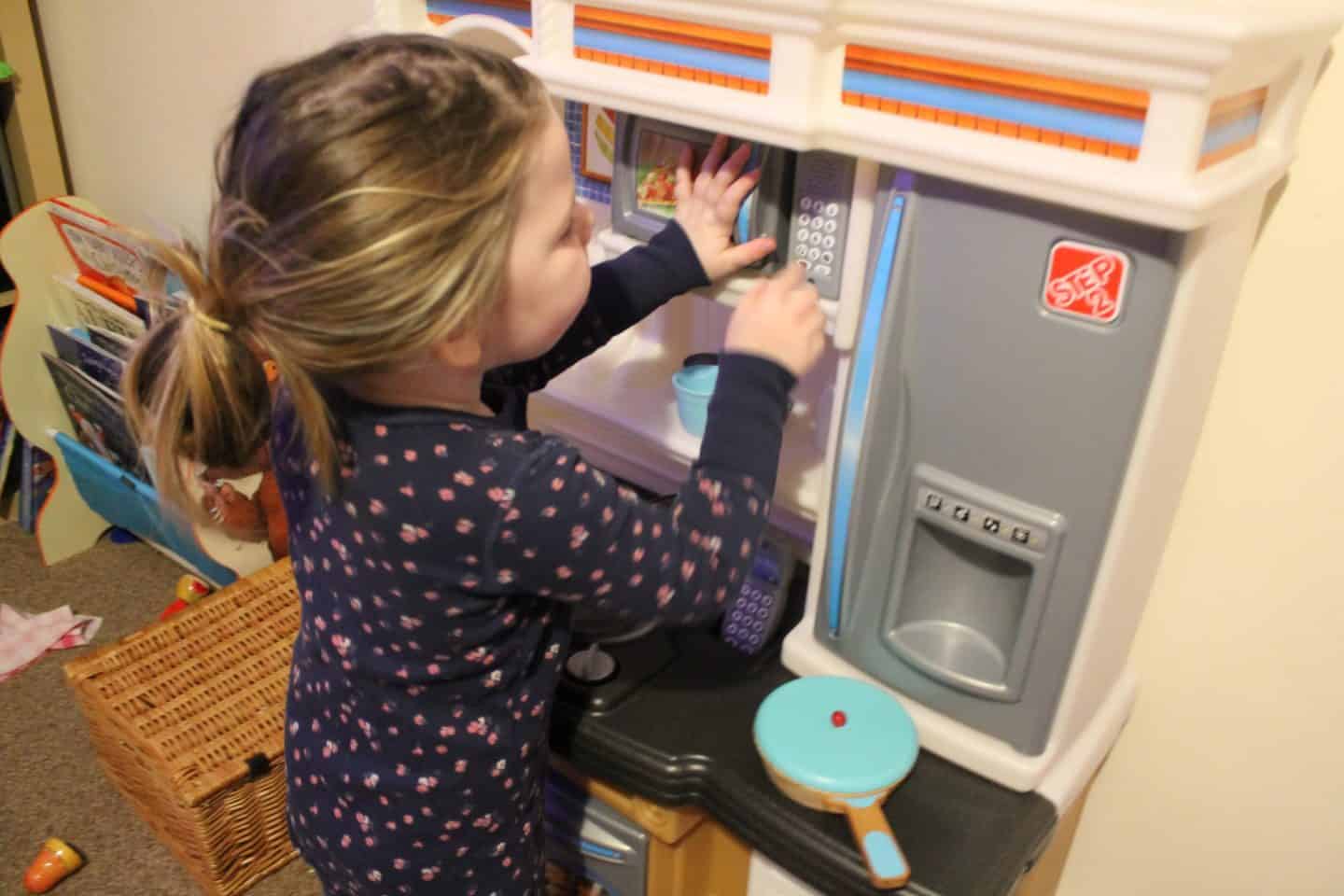 It really has made the long post pre-school afternoons go that little bit quicker, the TV doesn’t go on as early as usual either as these two budding chefs are so engrossed in their new kitchen! So a huge thank you to the Early Learning Centre, who made Christmas come a little early this year, and have already helped us make some special memories! It’s so nice to know that a shop is still going that my parents would have bought my presents from so many years ago!

As promised, here is me passed out amongst the wrapping paper, in a dress that my mum made for me, when clearly it had all got a bit too much! I look a little like my own kids when they’re asleep, which was a lovely surprise when I dug this one out of the only album I have! 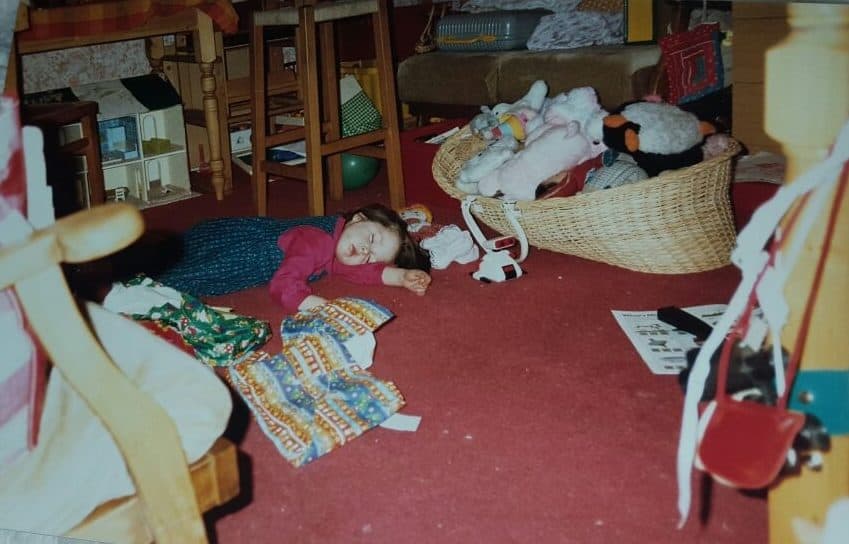 7 thoughts on “Christmas Memories with the ELC”