This past weekend I time up in Norfolk. We drove up after work on friday, via Ipswich to have dinner at a friends house. The journey was arduous and tiring to say the least, its highly irritating when people bump into each other causing one lane of the a12 to be shut at peak time on a friday.
Anyway, once we’d finally made it to Sams parents house and got into bed… Sam proclaims he’s not packed the trousers for his suit (nor his belt, aftershave or razor, but these are not so important!)
So bright, early and irritable, we head off into Norwich to see if Debenhams still sells the suit, and luckily it did, so we got the trousers, a hair cut (him) a nail fixed (me) and pootled home to get ready. 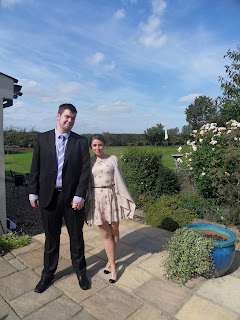 Sams lovely little sister drove us off to the venue, which was Stower Grange, a gorgeous little hotel just outside Norwich.
The wedding was so well planned and executed, hats off to Amy who planned it all herself! The details were lovely, a little box of emergency bits in the loo, the individual poems on the reverse of the table numbers, the tags on the favours (heart shaped choccies) even had heart shaped holes for the red ribbon… ALSO, TWIN BRIDESMAIDS, identical ones!
Games outside included a space hopper, Jenga, croquet & giant foam dominos… 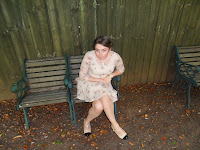 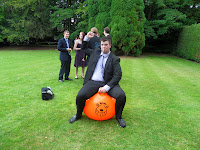 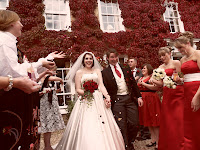 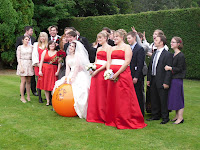 I wore a dress from forever 21, which was potentially a little on the short side, nevermind! I did low victory rolls in my hair, with it twisted and piled at the back, with a couple of little plaits thrown in for good measure! 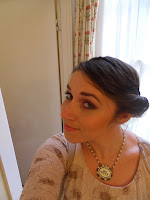 On Sunday, feeling slightly hung-over we trekked off to watch some sailing, even taking part in a race (which we didn’t win, but it was the first time i’d ever been in a sailing boat so I wasn’t really expecting to!) 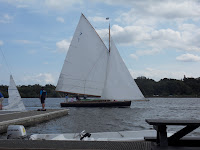 (this is the same type of boat (a Yeoman) that we sailed in, but this was someone elses…)
Amazingly a little podgy boy fell out of his little one man boat, got back in, then fell back out the other side, I really wanted to take pictures but thought it would be a little mean!!