If you have an open plan kitchen/diner, a cooker hood is your best friend. A good one will help you eliminate cooking smells before they reach the living areas of your home to bring out the best in flexible living. Luckily, the kitchen cooker hood market is vast and varied, with solutions for all budgets, styles and sizes. From unobtrusive extractor fans that simply do the job to designer appliances that add the wow factor to a contemporary open plan home, there’s no reason why you shouldn’t find a solution that scores big on style as well as substance. I spoke to Max Davies from Classic Interiors in Solihull about the importance of extraction in any kitchen design. He recommended 3 key questions that you should ask to determine the right choice of cooker hood. 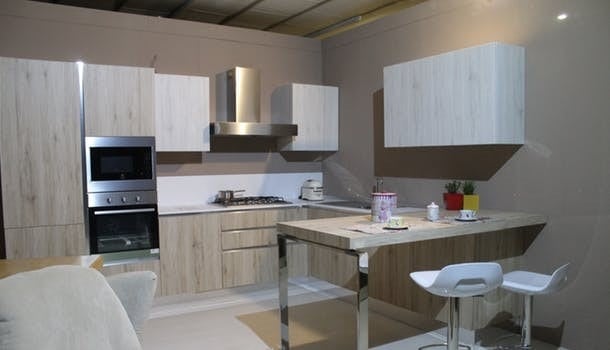 Broadly speaking, there are two types of extraction. Air that’s extracted via a cooker hood is either ducted to the outside of the building, or recirculated in the room.

Ducted hoods should be positioned near an outside wall, or use a run of ducting to reach the wall and vent outside. To achieve the best airflow, choose a rigid (not flexible) duct of 150mm diameter. This is the most efficient extraction method to remove all kitchen odours, steam, smoke and condensation. With new builds and kitchen extensions, it is a requirement that you can remove steam from the kitchen.

However, in terms of kitchen design, the position of the ducted out cooker hood may restrict your options for layout and configuration.

Recirculating hoods, on the other hand, can be sited anywhere in your kitchen since the air does not leave the building. Instead, the appliance has a grease and charcoal filter that the air passes through before being released back into the room. This type of cooker hood is quick and easy to install, and usually more cost effective to buy.

In terms of performance, recirculating hoods are not as powerful as a ducted extractor hood, and the filter will need cleaning or replacing at regular intervals. The advantage is that there is huge flexibility about where to position the fan, which is particularly handy for flats and apartments and unusual locations.

When it comes to choosing the physical size of your cooker hood, bear in mind that the appliance needs to be wider than your hob. If your hob measures up to 750mm in width, a cooker hood width of 900mm is recommended; for wide 900mm hobs fit a 1200mm wide cooker hood.

Take expert advice from a kitchen installer to ensure your cooker hood is fitted at exactly the right height. The recommended minimum distance is 650mm for electric hobs and 750mm for gas hobs.

Cooker hoods have decibel (dB) ratings to indicate the noise level at which they operate. While the noise level increases with the speed of extraction, more expensive extractor fans tend to run more quietly as a general rule.

Gone are the days when design choices were limited to either chimney hoods or integrated extractor fans. These days, there’s a huge range of different styles, designs and materials to choose from, the main ones being: