I saw this absolutely yonks ago on Zoes blog, and realised I had a half completed draft that I forgot about, clearly!

How often do you wash your face?
If I’m 100% honest every 2nd day. Before you go URGH, I have a bath every other day and wash it then, on the other days I use a makeup wipe to get rid of makeup, then tone and maybe moisturise if my skin gets lucky. I dont look after it at all. The important thing here is consistency since without regular care you will seldom see results. That’s why having a clear idea of what you need to do thanks to the articles clearawayacne.com can aid you in the endeavor. It can be challenging to initiate a stable routine, however, it’s best to start off with the bare essentials and then move on to more advanced care.–

Your skin type?
dry RIGHT between the eyebrows, oily nose and chin. I guess this is what they call combination. it is what I call foundation nightmare

Which facial cleanser do you use?
Whatever I have left from old feel unique boxes, or the orange tube that is a facewash or a mask… clean and clear maybe?

Do you use facial peels?
Nope, but I do use face masks, see above, and also those 99p ones from asda, you know the ones I mean, they’re not asdas own brand but they have different types… flat packets with bright colours?! 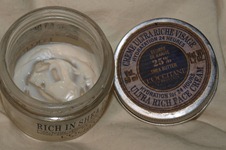 Which moisturiser do you use?
I’m almost out of Loccitanes Shea Butter, which is worth every penny, or the superdrugs own ‘natural high’ night cream. It smells awesome and is cheap as chips. 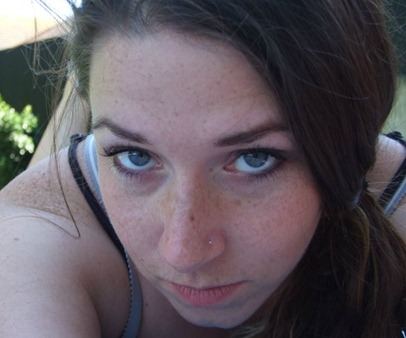 Do you have freckles?
Yes. ever so many of the little buggers. I quite like them but wish my shoulders weren’t covered in them
Do you use an eye cream?
I have a Lancome eye cream which was ridiculously over priced, and doesn’t seem to do anything special, but this may be because I use it very rarely! 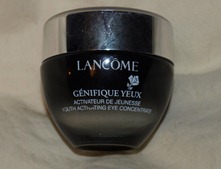 Do you have acne problems?
Not really, I tend to get spots along my jawline as I have PCOS, but they are normally bearable. I wasnt a spotty teenager either.

Do you use SPF?
Not as often as I should. I also use sun beds every now and again (so really shouldn’t moan about the freckles!) and before you all tell me how bad it is, I KNOW! I genuinely know that it is ridiculously so bad for me. 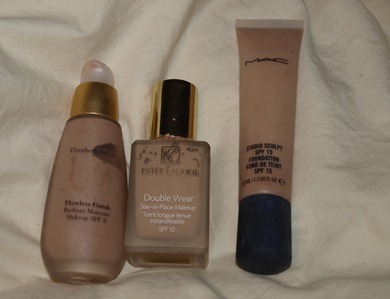 Any of these three, and sometimes Max Factor perfect match. 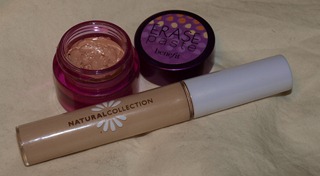 Either erase paste, but its a bit too dark at the moment, or the natural collections one in fair
Do you know your skin tone?
fair? errr, no idea to be honest. I burn easily.

What do you think about false lashes?
applied well they look amazing. I can rarely be bothered with the faff, but might wear them for my wedding, if I can get some good practise in!

What do you think about the rule of changing mascara every 3 months?
I suffer from really awful conjunctivitis every so often (Stress related normally) and should probably change my mascara this often, but I tend to use three different ones dependent on the look i’m going for, so they can last a lot longer!
Your mascara? 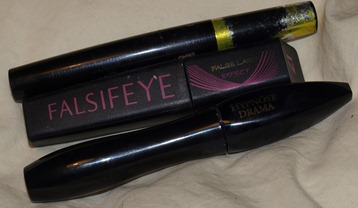 Lancome Hypnose Drama for a theatrical effect (ha, couldnt use drama again, well obvious!) the Falsifye one is a fairly good cheaper version (big bristly brush) and the top one I cannot even remember the brand, the think is old and manky, but it is meant to make your lashes grow faster. I dont reckon it does but it is good for a natural effect.

Sephora or MAC?
MAC because I’ve never been to a sephora, but I think MAC is overpriced for what it is.

Which make-up tool do you use mostly?
Probably eyeshadow brushes, but the blending sponge below is a godsend too! (manky right? it never goes back to its original colour when I wash it!)

Do you use eye shadow base?
Not daily, UDPP or a benefit creaseless cream in birthday suit, or for something a bit more sparkly MAC crushed on ice I think its called, its a limited edition paint pot.

Base for face?
sometimes but not daily, the porefessional, I don’t even know if it is all its cracked up to be, but apart from ‘that gal’ its the only one i’ve tried! When it runs out i’ll go for something cheaper! (benefit stuff is all pretty but if you actually use it it goes manky really quickly because of the light designs/paper labels 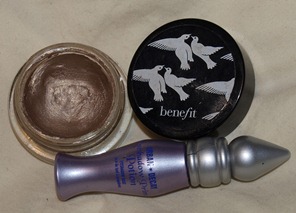 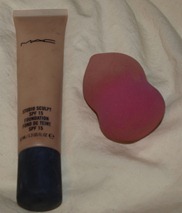 What is your favourite eye shadow?
Sleek black for eyeliner (lower) and urban decay Hustle (third from the right) I generally wear it in the crease over a lighter colour or just primer. 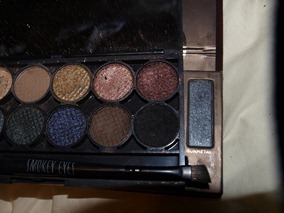 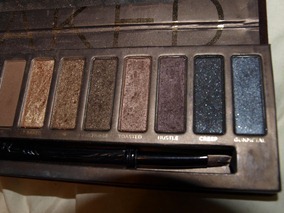 Which one is your favourite: liquid or dry eyeliners?

neither, gel, with a really fine artists paint brush

What do you think about pigment eye shadows?

Messy & too much faff 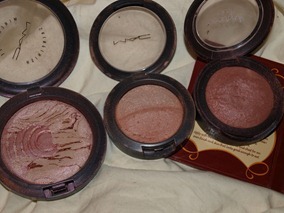 Hardest question, Probably MAC petticoat, closely followed Beauty UKs Baked Peach, then MACs happy couple, (both colours mixed together). Maybe mememe’s ‘pink’ too… or benefits Havana (both of which are in my hand bag so no pictures because I cant be bothered to go downstairs)
Do you buy make up from Ebay?
False eyelashes from China, nothing else as I would be worried about the quality.

What do you think about drugstore products?
No problem with high street stuff whatsoever! I am a big quantity over quality person, apart from a select few things! (mascara and foundation mainly)

Have you ever considered taking a make-up lesson?
No but when Sam bought be benefits high beam as a random present the lassie gave him a card for a free makeup lesson (for me obvs!) which I went to, ended up looking pretty nice, bought the porefessional (sucker!) and then had another free lesson, in which I ended up with really dark eyebrows, didnt buy anything that time!

Are you clumsy in putting on make-up?

Nope, I have it down to a fine art as I do it very early in the morning in as short a time as possible, normally in a darkish room so I dont wake Sam up. Unless I sneeze with wet mascara, in which case I swear violently and throw things.

What’s the worst make-up disaster for you?
tide lines along peoples chins. BLEND INTO YOUR NECK YOU THICKOS!

Do you like bright or natural colors?
Bright. I just dont wear them very often anymore! sucks to be me

Which celebrities’ make-up is your favourite?
Absolutely no idea, I dont really think about it!

What would be your one and only make-up material to use life long if you had to choose one?

Mascara. lots of it.

Do you ever go out without make-up?

Very rarely, I didn’t wear much when I went on holiday last month as we were living on a boat and I felt like a break! If i’m not leaving the house, or just nipping to the shop then I wont bother, but if its further afield then definitely mascara and eyeliner and blusher. I always wear a full face of makeup to work, without fail.

What do you think about your look without make-up? 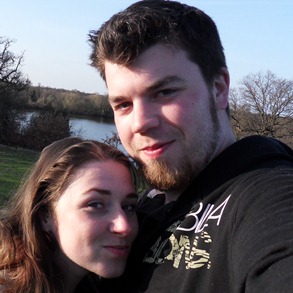 Which cosmetic brand do you think is the best?

Difficult one, lancome for mascara, mac for foundation, sleek for eyeshadows

What do you think about make-up in general?

I am annoyed at how much money I was spent when I look at my vast collection. I love playing around with it though, so I guess its money well spent!

That took bloody ages to do! please let me know if you do it to!