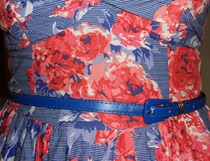 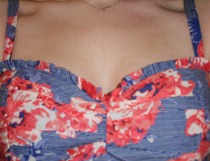 So this is what I wore to the ‘beach themed’ conference I went to last week, I moaned about it here. Obviously I would’ve gone in by bikini, but the rule was no swimwear! So this was most summery thing I could rustle up, and a few other people I went with were wearing Hawaiian shirts so it kinda matched! I love the frilly bust detail, and the little petticoat that gives it some shape.

The conference wasnt tooooo horrific, However I had to pretend at dinner the night before to do THREE shots that my boss practically forced down my throat (along with already being made to guzzle wine like it was going out of fashion!) Anyway, there was a spare water glass on the table, so all my shots went in there, and he was non the wiser and exceedingly happy that I was ‘getting drunk’. Why is being able to drink like a fish something to be proud of, in my company you generally get ‘kudos’ from people if you can drink till its time to get up the next day. plonkers. I was in a nice hot bath with a book by 11pm and missed all the inevitable drama that happened once people hit the club… 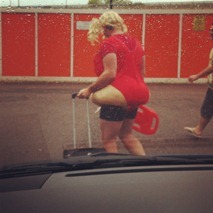 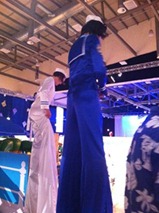 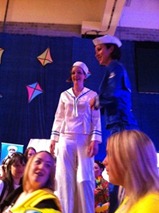 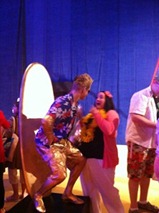 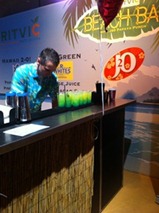 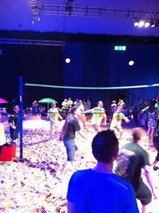 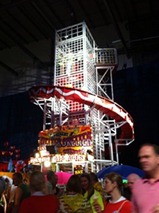 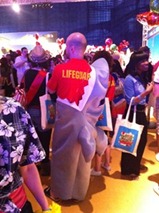 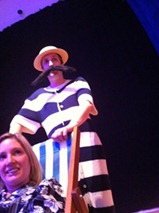 Beach volleyball, a helter skelter, stilt walkers, mocktails… and THEN as part of the entertainment we had… 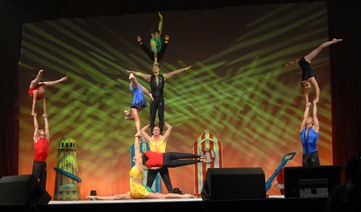 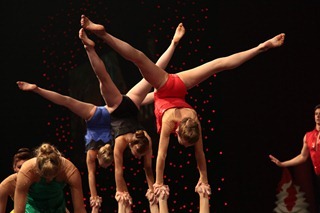 Spellbound (they wont BGT in 2010 I think) and they were genuinely gobsmackingly impressive. They stood on each other and bent into weird and wonderful positions. and OH MY those boys were ripped! they strolled out of the auditorium after their performance near where I was sitting, peeling off their unitard things as they went… cor blimey!

I had a lovely weekend, we had an amazing audit result at work on Friday which is the biggest relief IN THE WORLD EVER. and THEN my amazingly awesome friend Tina only went and GAVE me my wedding shoes, they are very pretty and from irregular choice, and I’ll talk about them more when I do another weddingy post… (ones’a coming I promise!) I also went to see Dark Shadows with her on Sunday, which was CRAPTASTIC. I wanted to like it, I really did. It wasn’t dark enough to be dark and it wasn’t funny enough to be a comedy. It was just crap. sorry deppites/burtonites, megafail!

I bought a couple of dresses from to be worn again that both need a bit of tweaking, but for £5 who was I to say no! I’ve also just taken some hideous buttons off a primark cardigan and replaced them with pretty wooden heart shaped ones, so i’ll do a post soon on clothey type stuffs.