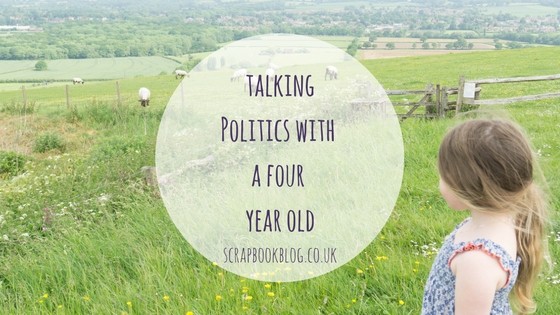 “Mummy why are there words in that window?”
“Well, the people that live in that house are showing everyone else which political party they will be voting for”
“A party? what sort of party? with balloons?”
“No, a party of people that want to rule the country”
“Oh right, what do they do? really no balloons?”
“Yes, really no balloons, but a lot of hot air”
“Hot air?”
“Don’t worry… Okay so there are a few groups of people who think they know what’s best for our country, and for your future”
“My future? like tomorrow?”
“Well, tomorrow and for the rest of your life”
“Until I die?”
“Yes, until you die”
“What do they do?”
“Well, that’s the million dollar questions…”
“Is that a lot?”
“Yes, a lot. The different parties of people have got a list of policies”
“Police?”
“Po-li-sees, things that they promise to do if everyone picks that party to run the country, like rules”
“What will they do? Rules like no throwing inside?”
“Well, one party will make it very hard for you when you’re older, or not even that much older actually. They are reducing the amount of money your school has to spend on things to help you learn, like books, craft things, and people to help you do things at school”
“That’s not very nice mummy is it?”

No, No kid it isn’t. Our future, and her future is going to be so affected by the outcome tomorrow, .  This was a conversation I had with Athena yesterday afternoon, walking her home from preschool on her fourth birthday. I’ve never been political really until the last few years, until I became a parent really. I had a very vague idea of politics when I was smaller, and although I have always voted since I have been old enough to it’s only in the last few years I have started paying attention to politics properly, outside of all the campaigning surrounding a big vote. I believe that 16 year old’s should get a vote, but only if politics is taught in an unbiased way from key stage 3 upwards.

Although I really want to tell everyone who to vote for I won’t. I shouldn’t. Voting is a huge privilege and not one to be taken lightly. Research, investigation and determination all need to play a part in who you vote for. But whoever you vote for please actually go and vote.  The Brexit decision could have been different if all the people who chose not to vote had voted. 13 million people in fact. We could be in a very different situation right now if they had.

If you have kids, or might one day have them even if they’re not on the cards now then get interested in politics. Find out what the different parties represent. Work out what is important to you, for your future and for future generations. My advice would be to steer clear of social media slander and mud slinging, go direct to the source; look at the parties websites, attend an event with your local MPs, ask them the questions face to face. If you’re really not sure where to start then Vote for Policies is a good website to start with, you mark how strongly you agree with statements relating to various issues and it will give you a breakdown of which parties principals you align with via a percentage.

I really hope that the next conversation I have with my four year old is a positive one, one with a brighter future (for the many, not the few!)