In about six weeks time my tiny girl will be heading off to Primary School. Well, I say tiny but she’s actually pretty tall but she did only turn four last month! We are both really looking forward to it, for different reasons though! I am looking forward to having a solid structured week, and she is looking forward to playing in the forest school and making new friends! I’m really not worried about her starting school, I am fairly sure her outgoing nature will mean she settles in well and makes new friends quickly, plus she has about five friends from her preschool in her class. What I am a little worried about is that she will be one of the youngest, and hasn’t shown herself to be that academic yet either. She’s not interested in learning to read or write other than her name just yet, and doesn’t like being told what to do either! Although that may be just being told what to do by me… either way, I wanted to spend a little bit of time over the summer doing a bit of preparation for school that won’t feel like preparation to Athena. I want her to enjoy her last few weeks of freedom before she enters the education system she’ll be in for the next thirteen years! 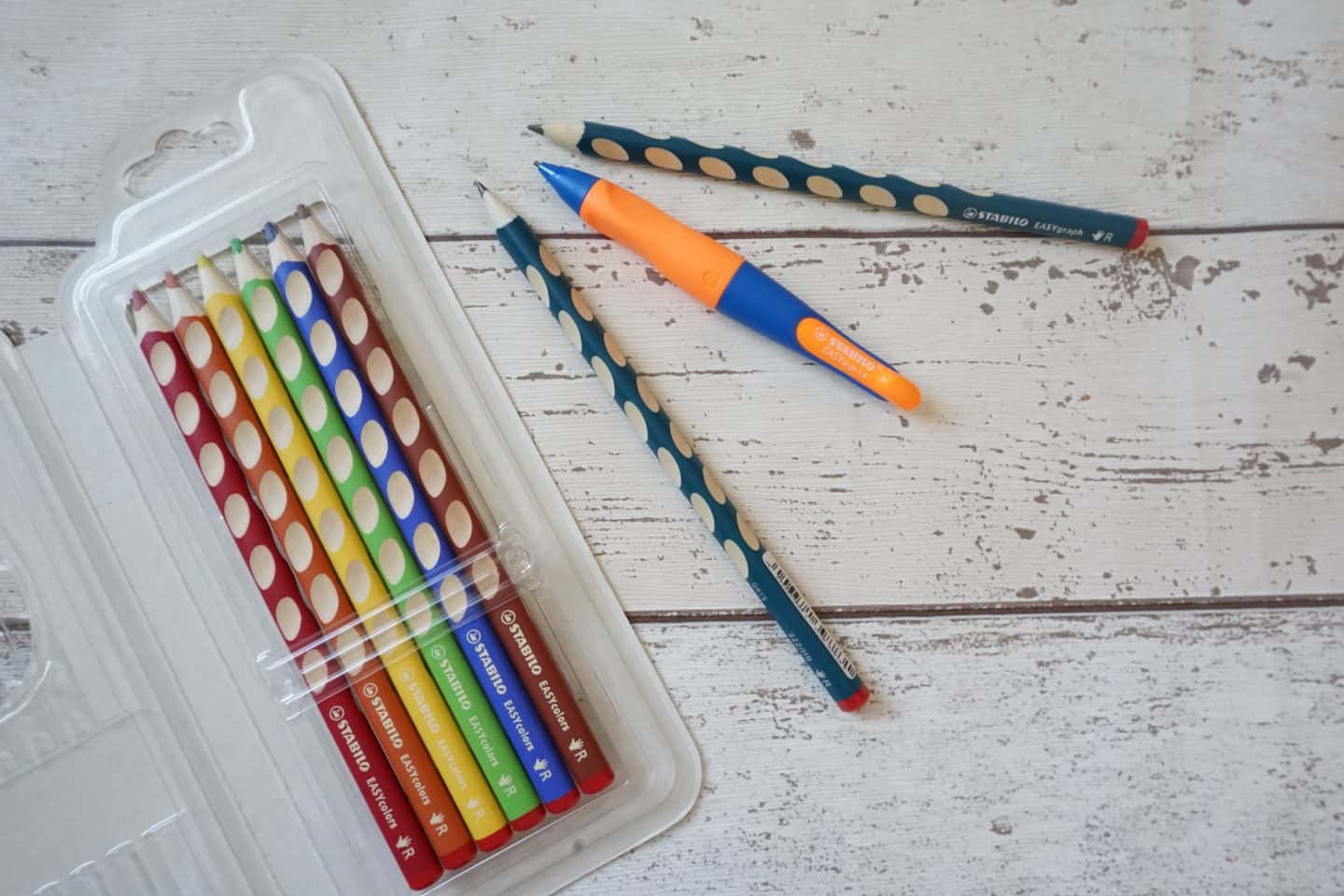 To keep her interested in writing, practising her letters, name and numbers Stabilo sent us a selection of pencils that are ergonomically designed to help small hands grip them in the correct way, so that the pencil is held in the right position for comfortable writing. Athena is right handed so we’ve been using the right handed pencils and colouring pencils. It really does help her to learn how to grip them, and no more round pencils slipping out of her fingers. You can see the indents on the pencils and the shape of the grip on the mechanical pencil. I thought the mechanical pencil might snap easily as she learnt about how hard to press but so far so good, the perfect beginner’s tools! 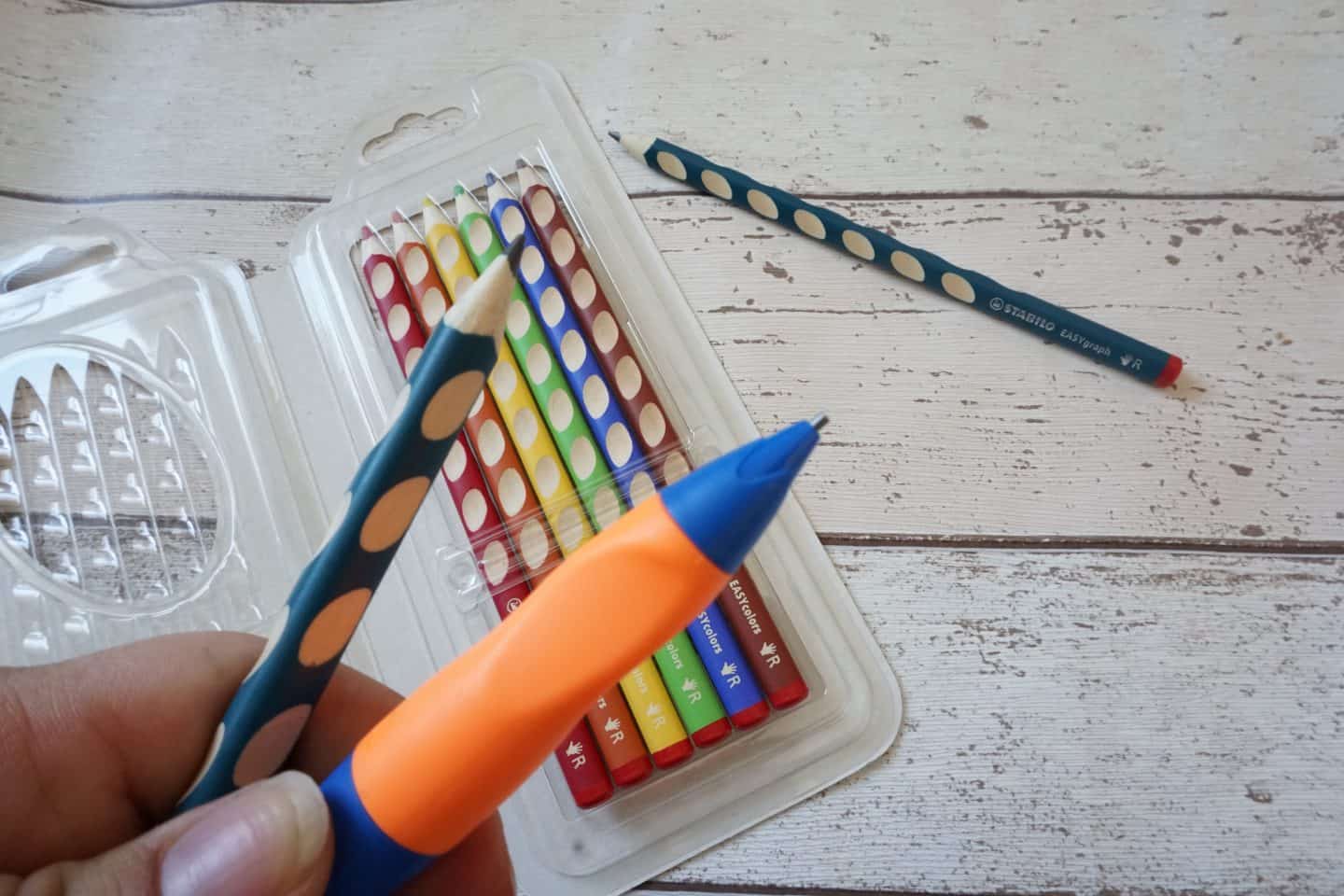 We’ve also started to learn a bit about the world, mostly because of a love of Go Jetters (a kids TV program where they visit different countries to save world famous landmarks) so a small Globe is perfect for showing her how the world looks. It blew her tiny mind that we actually live on a sphere (though I said ball to her, which probably confused things a bit!) and she’s loving spinning it around and picking a country at random. We then look up the country in our kids Atlas which was a mega bargain at a car boot sale- 50p! but it’s this one by National Geographic. If it happens to be a place where I’ve been then I show Athena a few photos or we look some up on the internet. It’ll probably be a few years before they start doing geography but it’s something Athena actually seems to have an interest in so I’m embracing it! 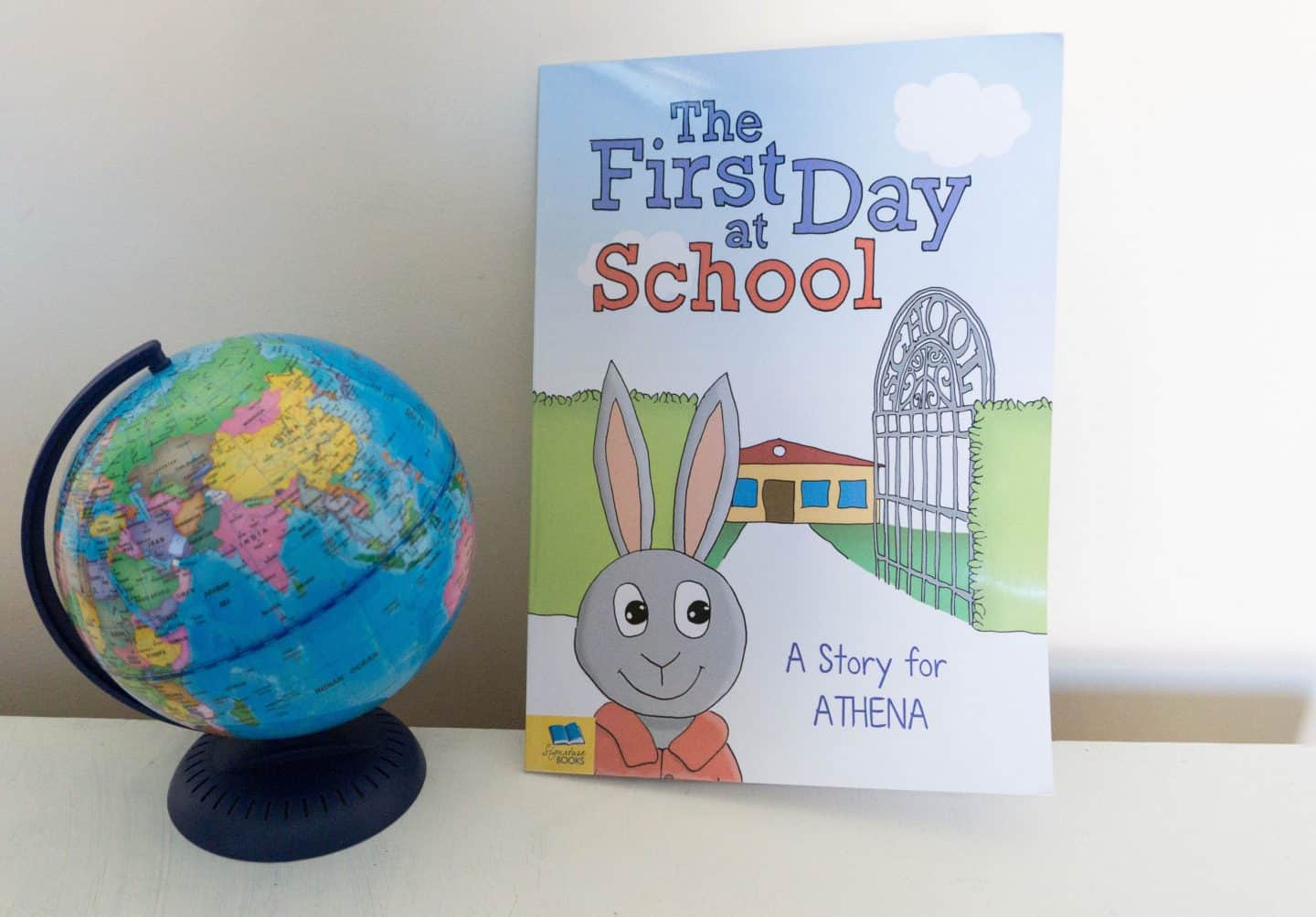 We’ve also been spending some time reading ‘The first day at School‘ which is a lovely personalised story that follows a little rabbit through their first day at school, talking about some of the things that might happen in a normal school day, and touching on friendships and nervousness too. Athena loves it, and has been enjoying pointing her name out as it’s dotted through the book! It makes a lovely gift for any child who’s going to be starting reception as it’s a lovely way to gently introduce information about schools, the routines and daily expectations. It also meant Athena has asked a few questions too which is always a good thing! 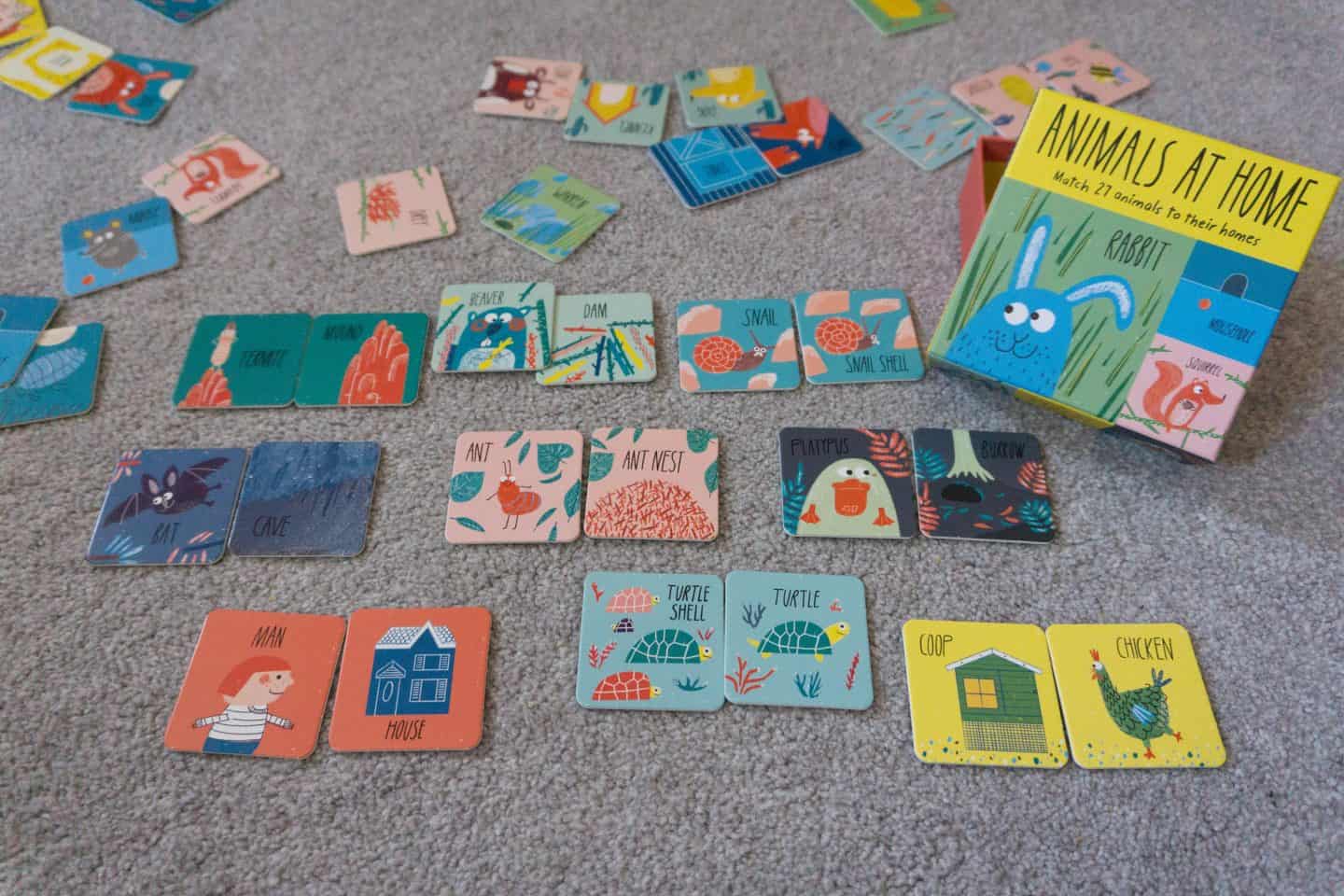 We were also sent Animal at Home, a matching game that teaches the names of the homes that Animals live in, many of which I had no idea about! It’s like a traditional pairs game only you match the fox to the den, for example, or the man to the house! The illustrations are modern and fun too, which makes a change from lots of kids games that are very standard cartoon looking! Even Arlo likes playing this game, though he seems to connect the colours rather than the homes but that’s okay as he’s still little! Athena is so excited about Forest School and knows she’ll be learning about wildlife then so this is a great activity to get her thinking about where animals live! 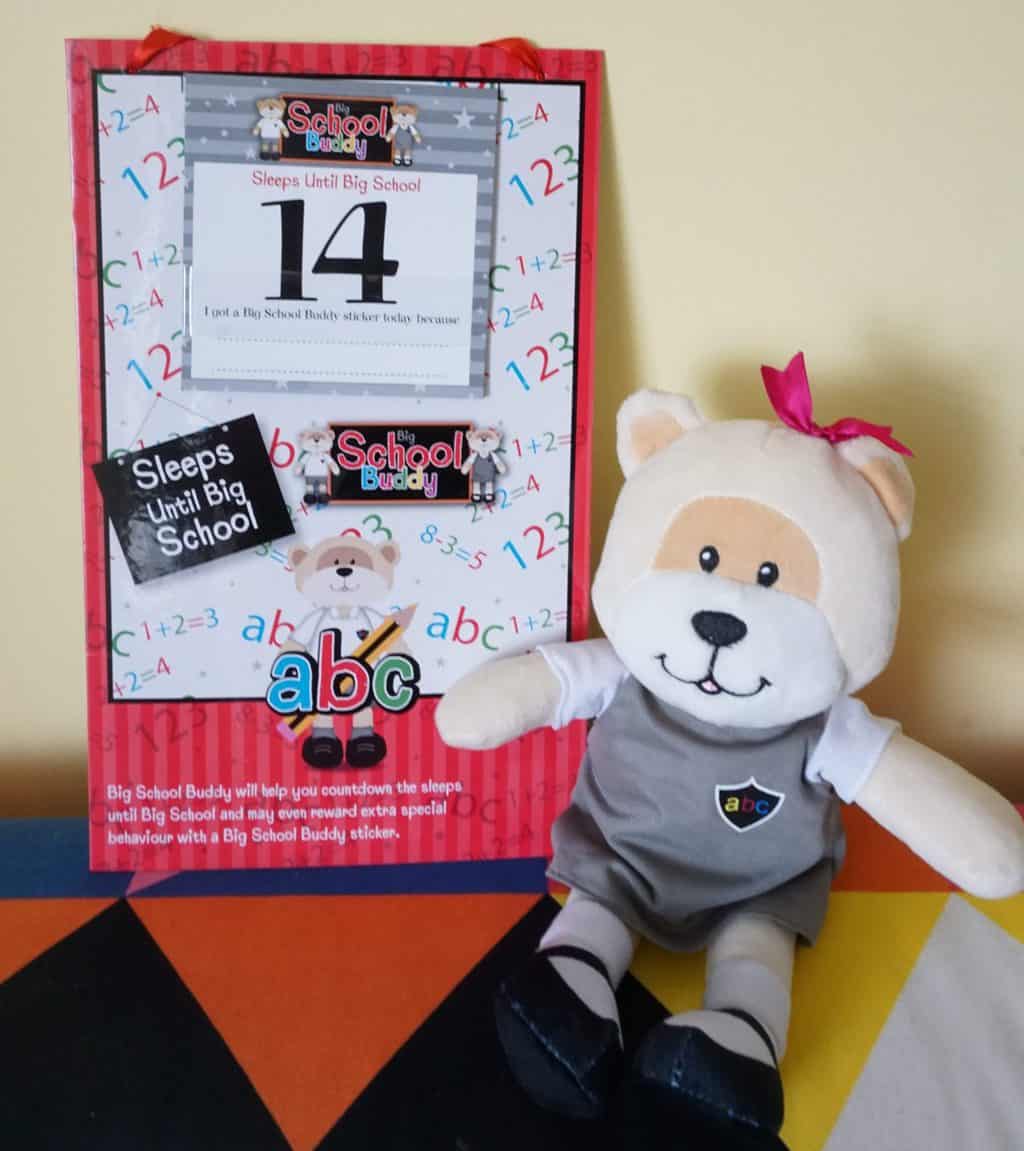 Athena has also been sent the ‘Big School Buddy’ Bear to help count down the days till starting school. Available with a boy or a girl bear each box contains the bear, a two-week countdown calendar and a set of stickers that can be given to encourage good behaviour or skills. I try not to reward behaviour but plan to use the stickers to encourage Athena to get dressed properly each morning, and we’ll be practising with her school uniform and PE kit in the weeks running up to starting school. I’ve shown her the bear and told her that she can play with her during the summer holidays, but the count down chart has been pinned up ready for the fourteen-day count down! I like that the bear is fairly small and quite lightweight, so if Athena gets particularly attached to her she can probably be slipped into her school bag for the first few days of school if she needs some reassurance.