We spent a week of our Easter holidays in Wales, via a day and night in Gloucester, and we were lucky enough to have been given a Kia Sportage for the week to put it to the test; both on winding Welsh roads and motorway driving to see how it fared as a family car for a week away. The Kia Sportage is a great car to travel in, comfortable and spacious inside and fun to drive. It is a really smooth drive on all sorts of terrains, with plenty of features for both comfort and safety. We had the All New Kia Sportage 3 1.7lr CRDi, which is the most environmentally friendly Sportage model. With 19″ Alloys, 8″ touch screen Sat Nav/Media system, reversing camera, Dual A/C, heated seats in front and rear and a whole host of other features it’s definitely a top contender for a family car. Here’s our review of the features, and a video of it in action too. 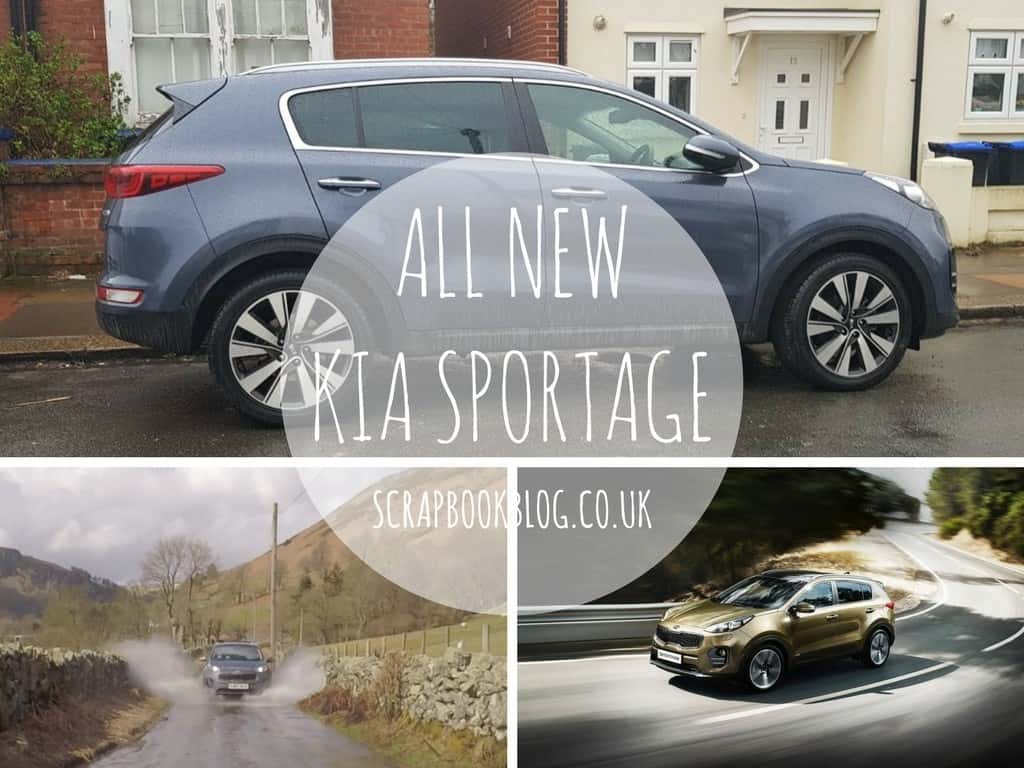 We were on a self-catering lodge holiday so needed to take quite a bit with us in terms of luggage; clothes; food & kitchen bits, lots of wellies, the kids scooters, toys and books and rain coats, warm coats, hats, two laptops and camera bits – lots basically! We had no trouble fitting everything into the boot with some careful tetris-like packing which meant that there was plenty of space in the back between the kids car seats and in the footwells. There are also two compartments on each side of the boot accessed by lifting the spare tyre cover (with a proper spare tyre in place too should you need it!) as well as a roomy glove box, central console compartment and door storage. We could pull over the retractable parcel shelf to keep everything secure and still see out of the rear window when driving. Luggage space: 491 Litres.

This car is big, there’s no denying it, but it doesn’t actually feel that big when you’re driving it CAR PARK SPACES. It’s 4.5 metres long, 1.85 metres wide and 1.63 metres tall, but the extra height means that you have a great view of the road and other traffic as you drive (and mountains if you’re in Wales!) and the reversing camera means that manoeuvring it is easy as pie. Sam is a tall guy, 6’5 or and his hair brushed the roof. I am 5’3 and though I had to have the seat in the highest position, this was easy and quick to do when we swapped over and I actually felt more comfortable driving the Sportage than our own car as I felt like there were far fewer blind spots, plus some higher models come with blind spot detection anyway. 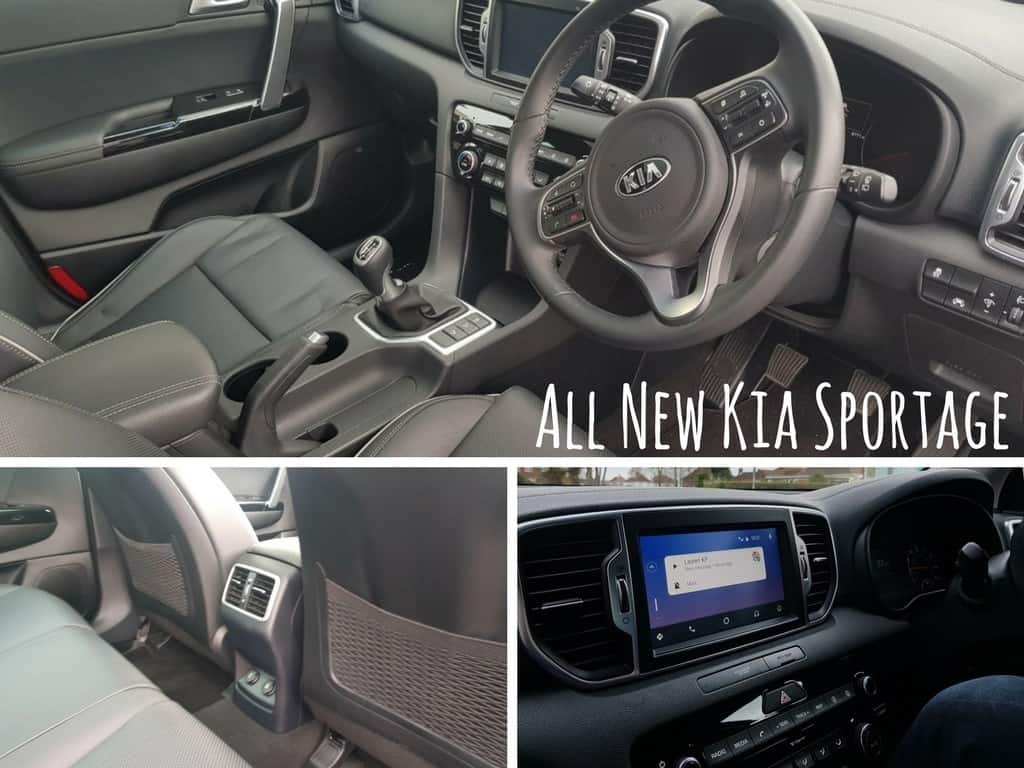 I generally don’t like things like cruise control as find them fiddly to use, but it’s so easy to set on the Sportage that I look advantage of it, setting it in two clicks from the steering wheel. In fact I thought everything was easy to use and all the info you needed was right in front of you on the dashboard, with the ability to cycle through till you got the screen you needed – including one displaying the spotify track I was listening too! With the clever touch screen media system incorporating Sat Nav and Android Auto you could connect to your phone and stream whatever you wanted via cable or bluetooth. We prefer to use Waze as our satnav, and could easily display this on the 8″ screen instead of Kia’s own version by using Android Auto. All the functions on the touch screen were obvious and easy to use. The DAB radio was a big plus so we could choose from hundreds of stations at the sound quality was amazing via JBL speakers, even at high volumes – though the only thing we really got to listen to loudly was the Moana soundtrack!

Lane Keep Assist & Speed Limit Info functions are two impressive features. Lane Keep Assist gave a warning beep if the car detected you had drifted out of your lane without indicating first, and can steer the car back into the correct lane if necessary. Speed Limit function uses a camera behind the rear view mirror to read road signs and displays the correct speed limit on the dashboard so it’s easily visible as you drive.

Something else we were impressed by is that in the event of an accident the automatic door locks will unlock, so that doors can be opened in a hurry if needed, as the doors automatically lock when you reach a certain speed. 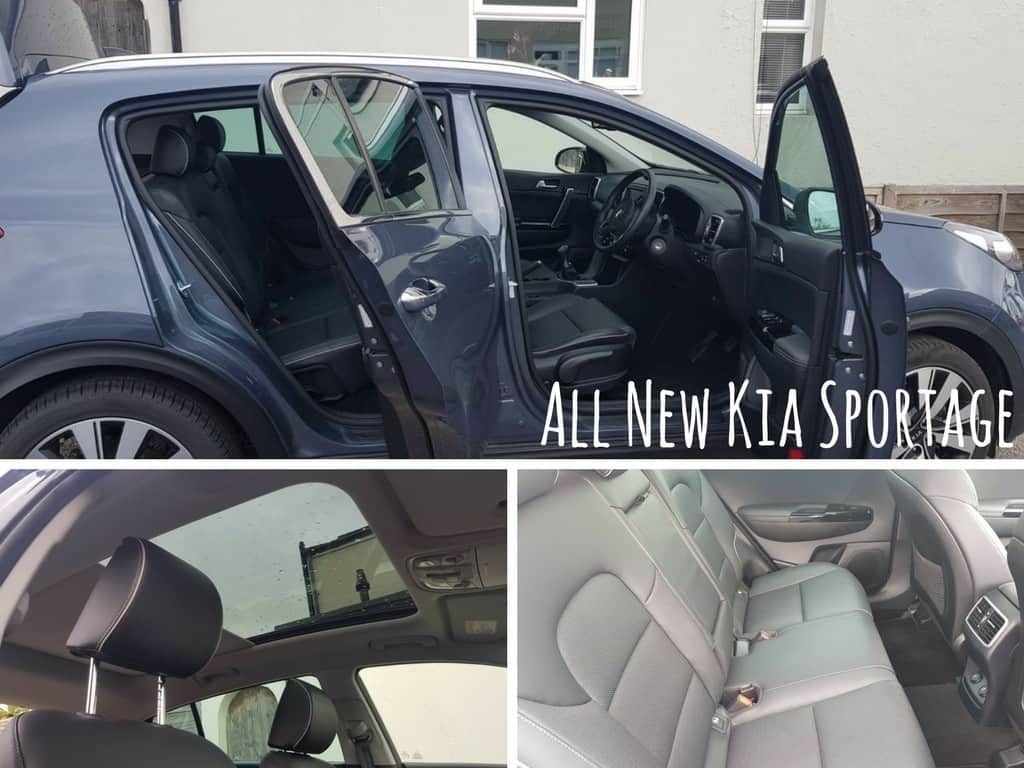 The Kia Sportage 3 has a glass roof, with a retractable sunroof which also opens for fresh air. The roof retracts right back so the car is flooded in natural light, plus the kids loved watching the rain drops fly about when it was wet! Having so much extra light in the car made such a difference on gloomy days, of which there were quite a few in Wales!

Another great feature we liked was the adjustable heated seats in both the front and the rear, although we didn’t use the rear ones as the kids were in their car seats so raised up. The driver and passenger could each adjust their own seat, as well as being able to take control of the temperature on their side of the car, or sync them together.

USB chargers were a plus for us, especially as they had them in the back which meant we could charge the kids tablets as they used them. 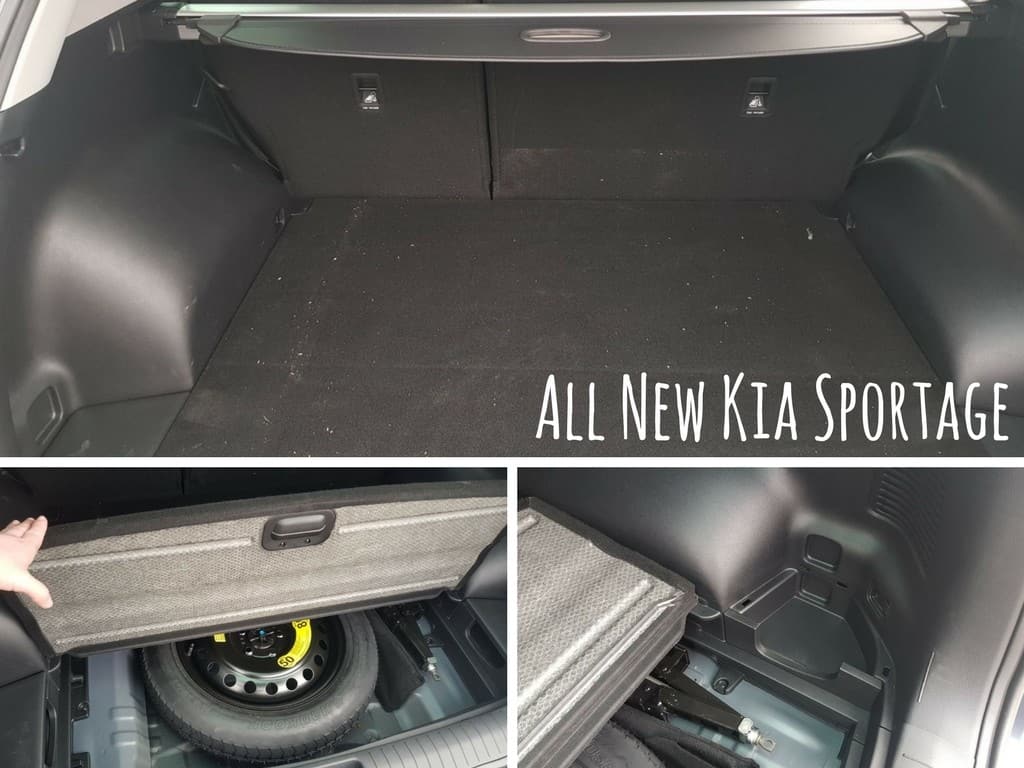 Athena is in a non isofix car seat, which fitted easily on the back seat and felt secure once she was strapped in. Arlo is in an Isofix seat and faces forwards, and we found this really easy to install and tether, and had no worries about how secure it felt. Due to the size of the car even if he was rear facing (meaning the seat would extend over the edge of the back passenger seat) I think there would still have been plenty of room. In our current car when he was rear facing he could only go behind the passenger seat as Sam needed to have the drivers seat extended right back to accommodate his legs, but that wouldn’t have been an issue in the Sportage.

What could be improved

As far as we could work out the media centre/screen doesn’t turn off whilst driving until you remove the key from the ignition and open the door, this meant that on a couple of times when Android Auto app bugged out due to signal issues (cheers Welsh mountains!) and needed to be re-set to get Waze navigation working again we had to pull over, switch off and open the drivers door to do this. We think this is an app issue rather than a problem with the Sportage, but it was still annoying.

As mentioned before the Lane Assist is great – when you want it on!  The button to turn it off is not on the steering wheel, but accessible from the dashboard to the right – it took us a couple of days to spot it!

The Hand brake has a really small difference between off (full down) and the next level – so quite often we’d think we’d engaged, were able to drive but the beeps told us otherwise! A small niggle but happened quite a lot!

Overall we loved it, our niggles are just that- niggles that would easily be forgotten about if this were our main car. So if you’re thinking about a new car I would definitely suggest booking a test drive! I’ve put together a short video sharing our thoughts during the week whilst out and about in the Kia Sportage.