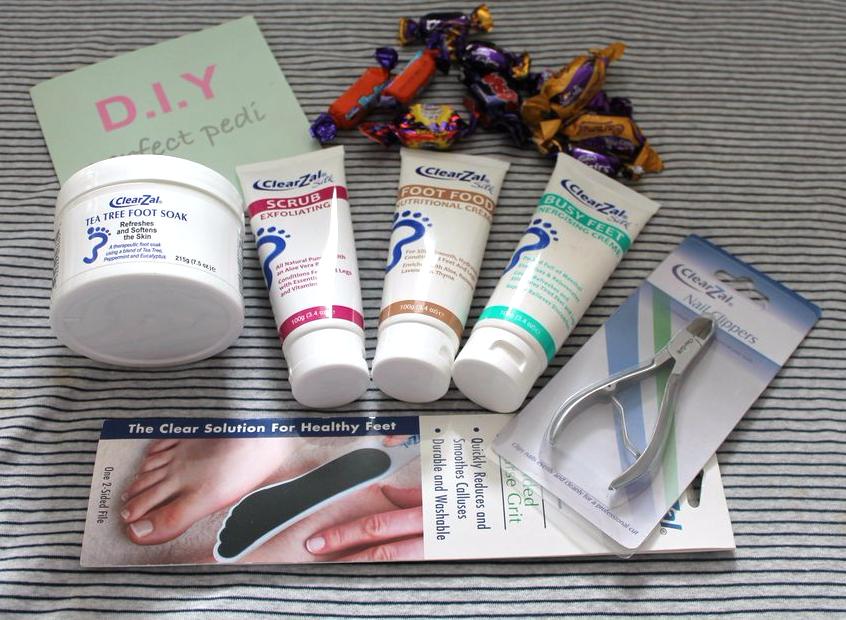 Our feet carry us for thousands of steps every day of the year, and I for one put my hands up and say I very rarely do anything special to take care of them! A few months of not being able to reach them when I was pregnant, and them carrying me and my large bump around mean they’re not in the loveliest of conditions! Add to the fact that they had been hiding away in boots or trainers since last September and you can understand why I’m not including a ‘before’ photo! I was sent a fantastic pedicure kit from Clearzal, who sell pretty much everything you would need to sort out even the most dire of feet!

I have been giving my feet a proper soak in the Tea-tree Foot soak for twenty minutes, I dissolve it in hot water and then dunk my feet it whilst catching up with netflix (so sometimes end up sitting with my feet in cold water as I get engrossed!) then dry them really well. I use an old rough-feeling towel so it helps get all the bits of dead skin off that have gone all soft and flaky. Is there a nice way to describe a pedicure? No didn’t think so…

Then I attack them with the foot file (do this over a bit of kitchen roll if you’re not in the bathroom, so you don’t then need to hoover up bits of foot) to get rid of the rest of the dead skin and then smother them in ‘Foot food’ which smells of Lavender, and pop my feet up for another episode of whatever I’m watching on Netflix… hello OITNB. Once it’s all soaked in I trim and file my nails, then paint! I’m still in that weird post-pregnancy phase of having really fast growing nails and hair so I’m making the most of it before they all go weak!

Whenever I have a bath I’ve been using the Silk Scrub to exfoliate my feet too, once they’ve been in the water for a while. It’s a nice gentle scrub so it’s not too ferocious and doesn’t leave them raw! I’ve been using ClearZal products for almost three weeks now and my feet are definitely a lot smoother, and the amount of skin I’m removing from my heels is less each time! Definitely not afraid to take my shoes off at other peoples houses now!

Talking of shoes, meet my new favourite ‘stroll along the beach and then hurtle after the toddler as she pelts down the pebbles towards the sea’ shoes (aka waterproof and comfortable!) They’re Crocs. Now if you had asked me five years ago, heck even one year ago if I would ever wear a pair of Crocs then I would have given you a resounding no. To be quite frank I’d probably not have seen myself wearing Birkenstocks either and I have two pairs and wear them pretty much daily now!

Anyway, when Flip Flop Shop got in contact to see if I wanted to pick something from their website I decided to go for something other than Birkies (which they do sell!) and went for something a bit different, and didn’t realise they were Crocs at first!

These are the ‘Huarache’ and they’re really comfortable and as the sole is made of rubber which is odour resistant (hurrah!) and the straps are soft and flexible for a nice close fit. I reckon I could even wear them swimming in the sea if it ever gets warm enough, which solves the age old problem of having to leave your flip flops at the edge of the water and hope you can get back to them before the tide does! I chose the green/blue colourway but there is a pinkier version, and they go up to a size 9 too! I’m pretty pleased that I can attempt to even out my birkenstock tanlines now too!

I was sent Clearzal products and the sandals in exchange for my honest review of these items.

3 thoughts on “A Pedicure and some new sandals!”