We’ve had a really busy week, and I’m sitting down to write with a cup of tea this after strolling round the car boot sale for three hours this morning, and before we head out for a picnic at Nymans Gardens this afternoon! We’ve redecorated the living room this week (including our first foray into wallpapering!) plus we’ve sort of tidied the attic, bought Athena a bike for her birthday as well as all the regular day to day stuff – in short we’re all a bit exhausted! To add to the stress Sam left his house keys at his Mum’s in Norfolk and our spare set has gone walkabouts – so we’re both sharing the same set which means a lot of careful timing! I really need to get a new one cut this week!

Wallpapering wasn’t as hard as anticipated, although our ancient old (filled in, sadly!) chimney breast is more than a bit wonky which meant getting it straight was tricky round the edges but I really like how it looks and now I can’t wait for our two new sofas to arrive this week! We’ve spent most of the week keeping the kids out of the living room as it was full of paint and rollers, as I also re painted the kitchen cabinets whilst we had the space. Next on the agenda is a huge toy clear out, plus I want to find new blinds and a rug for the living room that will match the new decor!

Thankfully on Wednesday night we’d been invited to the newly refurbished Toby Carvery, The Downlands in Worthing for a meal – and it was so lovely not to have to cook for a night in the middle of all the redecorating! Now I love a roast dinner, and it’s even better when you don’t have to do any of the preparation and cooking yourself! Inevitably everyone wants different veg and trimmings, so a carvery is perfect for pleasing everyone! 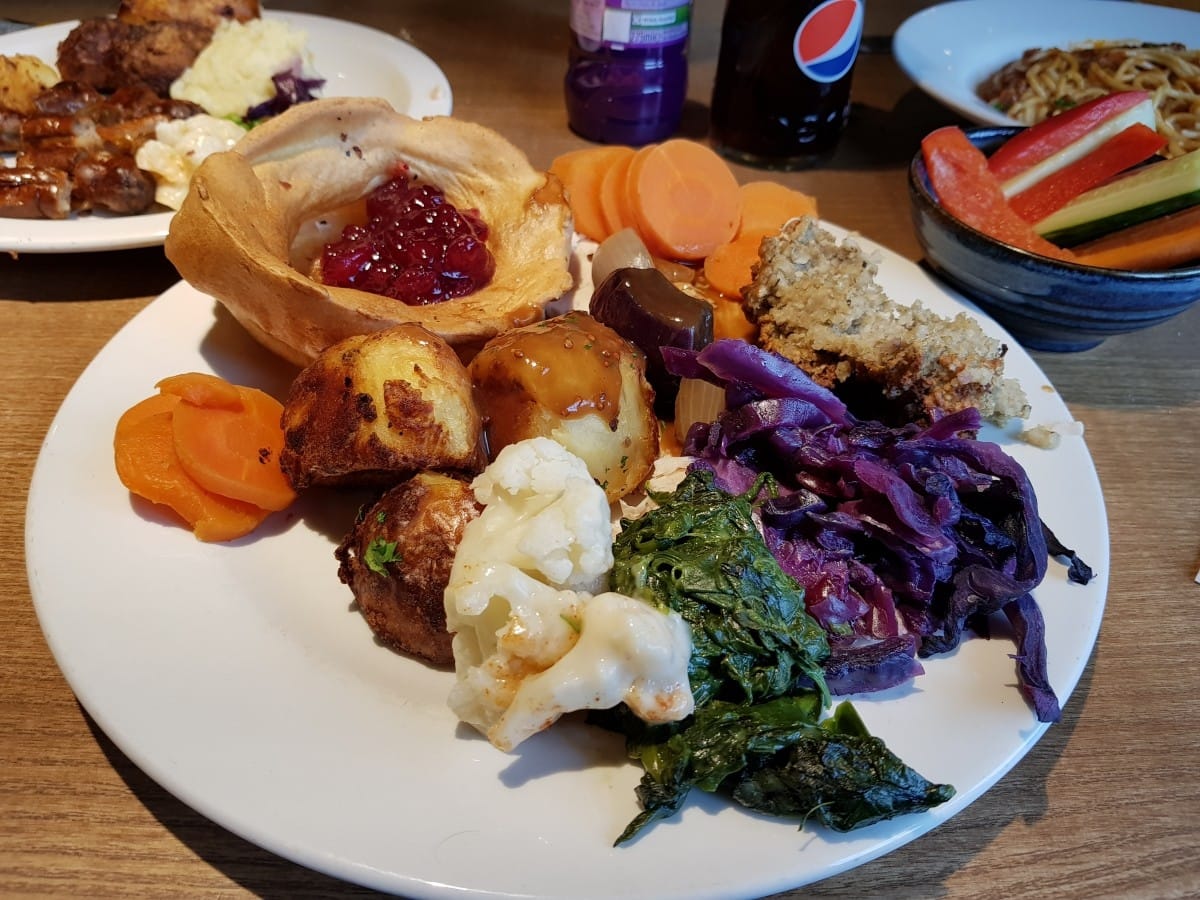 The Downlands is easily accessible from the A259 in both directions, it’s on the Lyons Farm park.  We went around 6 p.m. on Wednesday and the restaurant quickly filled up around, so I think the trick is to get there slightly early before you need to queue for your dinner, not that it ever takes that long! The new decor is stylish and contemporary with hand drawn pictures of this restaurant and others around the country on the walls. It still retains the traditional ‘pub’ feel but is stylishly done, with Toby Jug decorations and a display of fresh fruit and veg. I did feel that the tables were a little too close together but nobody seemed to mind my noisy kids as there were lots of other families eating too. 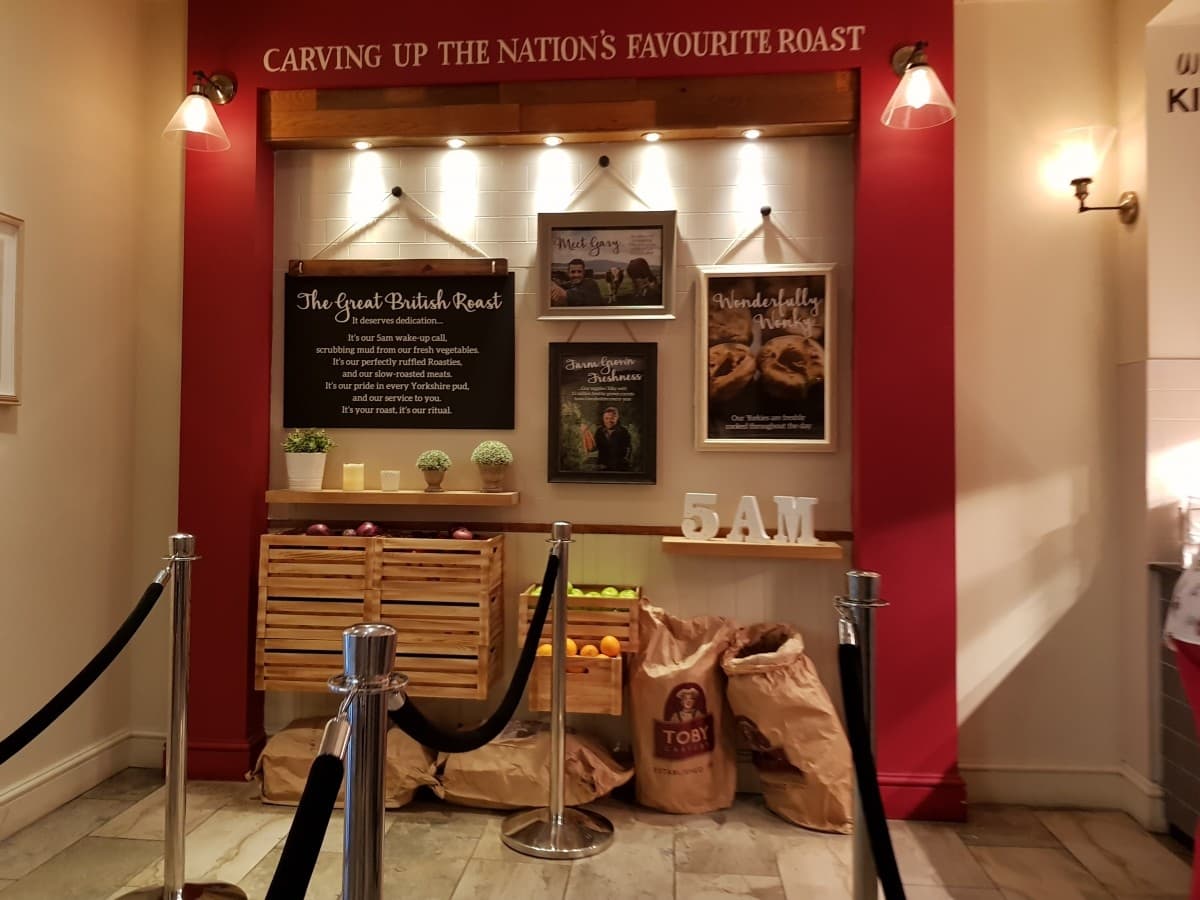 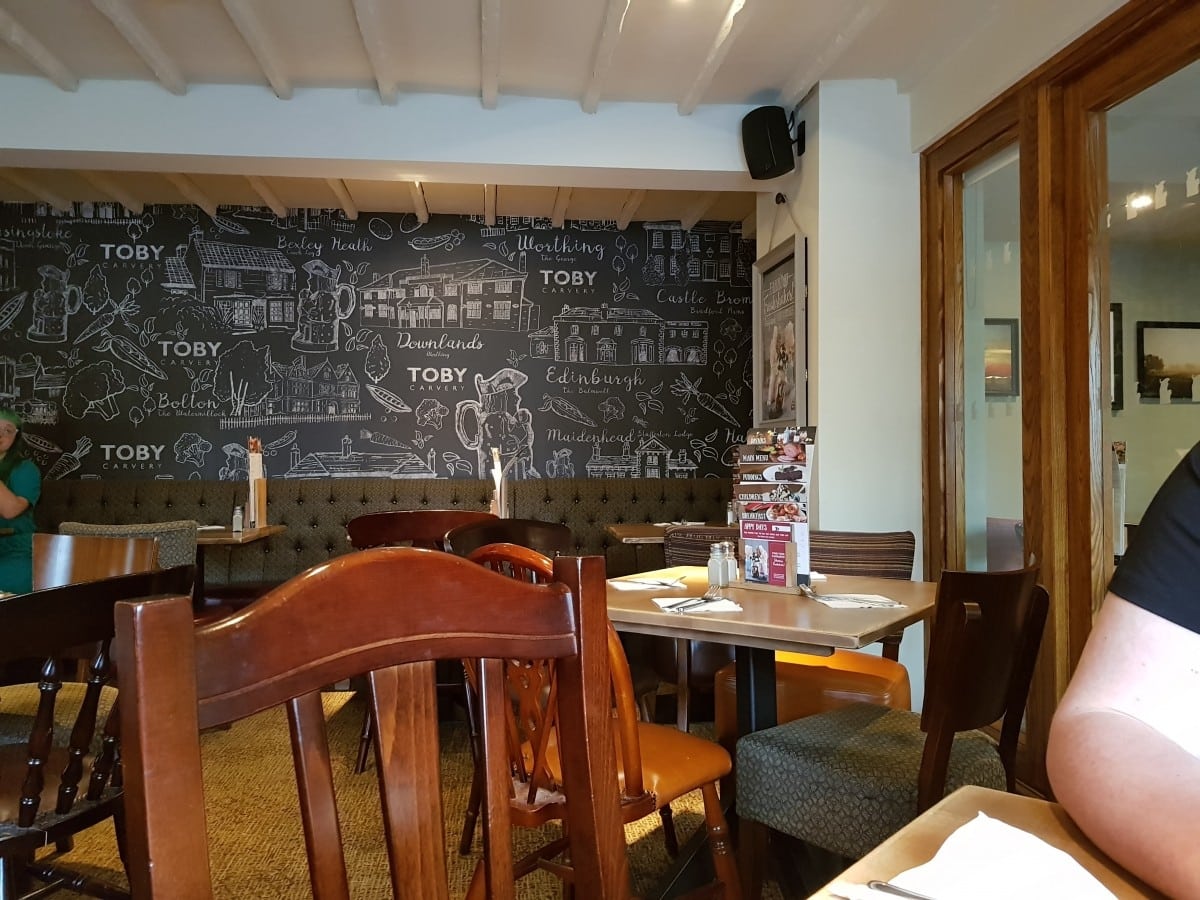 Our waitress was lovely although she was kept on her toes by lots of tables she was quick to clear plates and remind us that our drinks were free to refill. She also came back to get our pudding order before the kids got too restless! Sam and I both had the carvery of course; and as ever the option of helping yourself to as many vegetables as you fancied is perfect – especially as we’re both doing Weight Watchers! The meat was hot and perfectly cooked and served with a smile by the chef who was carving it onto people’s plates. A full range of sauces and gravy is on display to help yourself too, and my only complaint with the food was that the stuffing was a little hard – the roast potatoes were spot on which doesn’t often happen at a carvery I find! Since my last visit they have added a gorgeous mustard gravy which I loved! 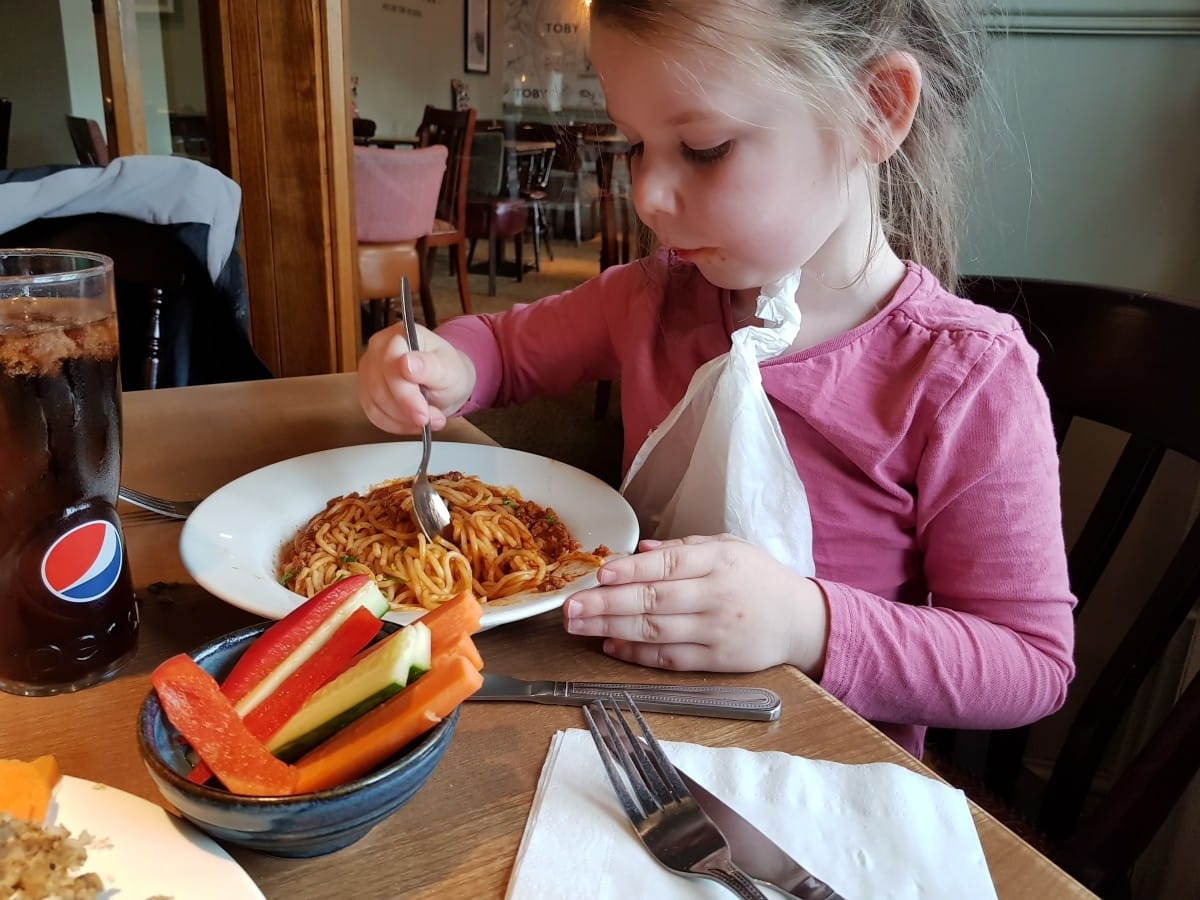 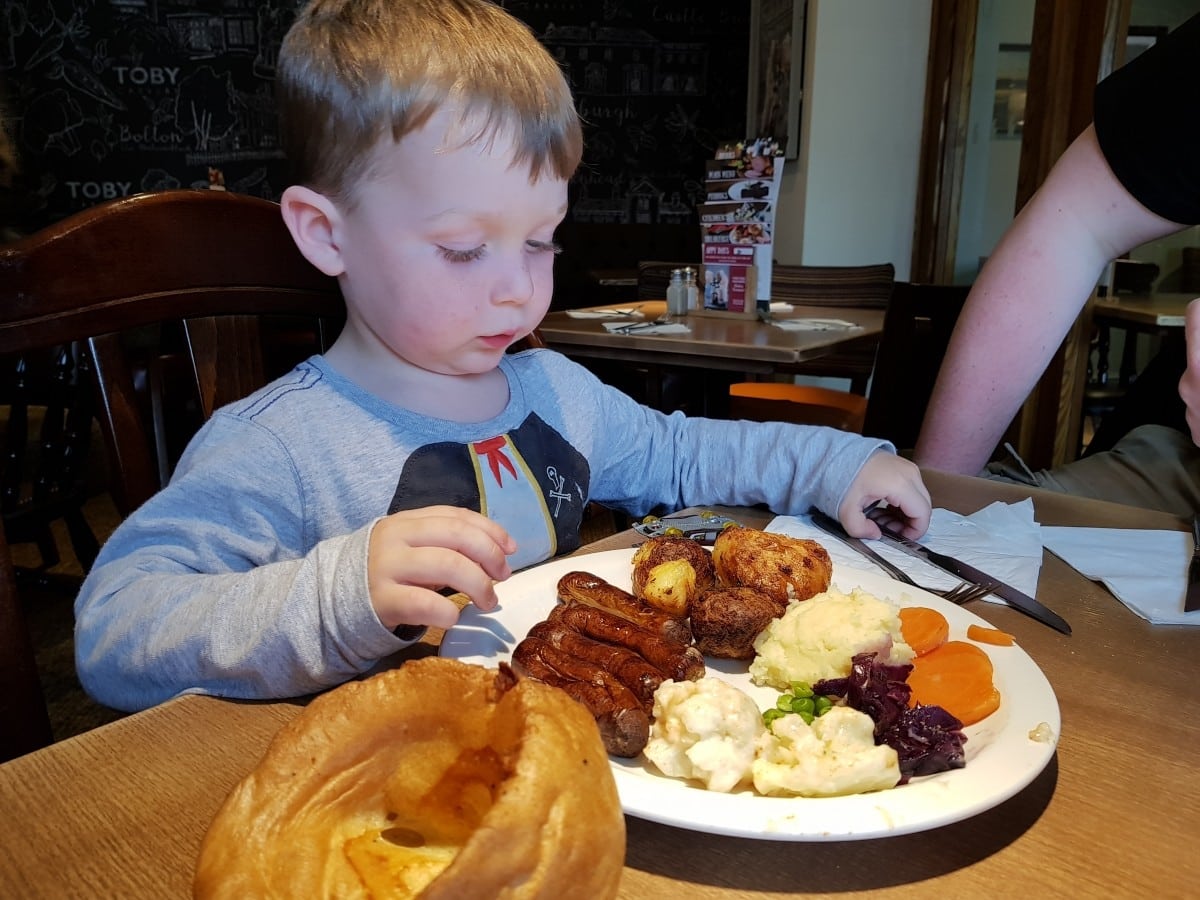 Arlo chose the kids’ ‘Sausages in a giant Yorkie’ and again with his meal we could add vegetables and gravy as he wanted. Athena isn’t really a fan of roasts, so she chose to have a Spaghetti Bolognese meal, which was served with vegetable sticks (not that she ate many of those but it’s a lovely touch and helps with their 5 a day!) Plus her meal arrived really quickly, it was on the table by the time the rest of us got back with our carvery meals. 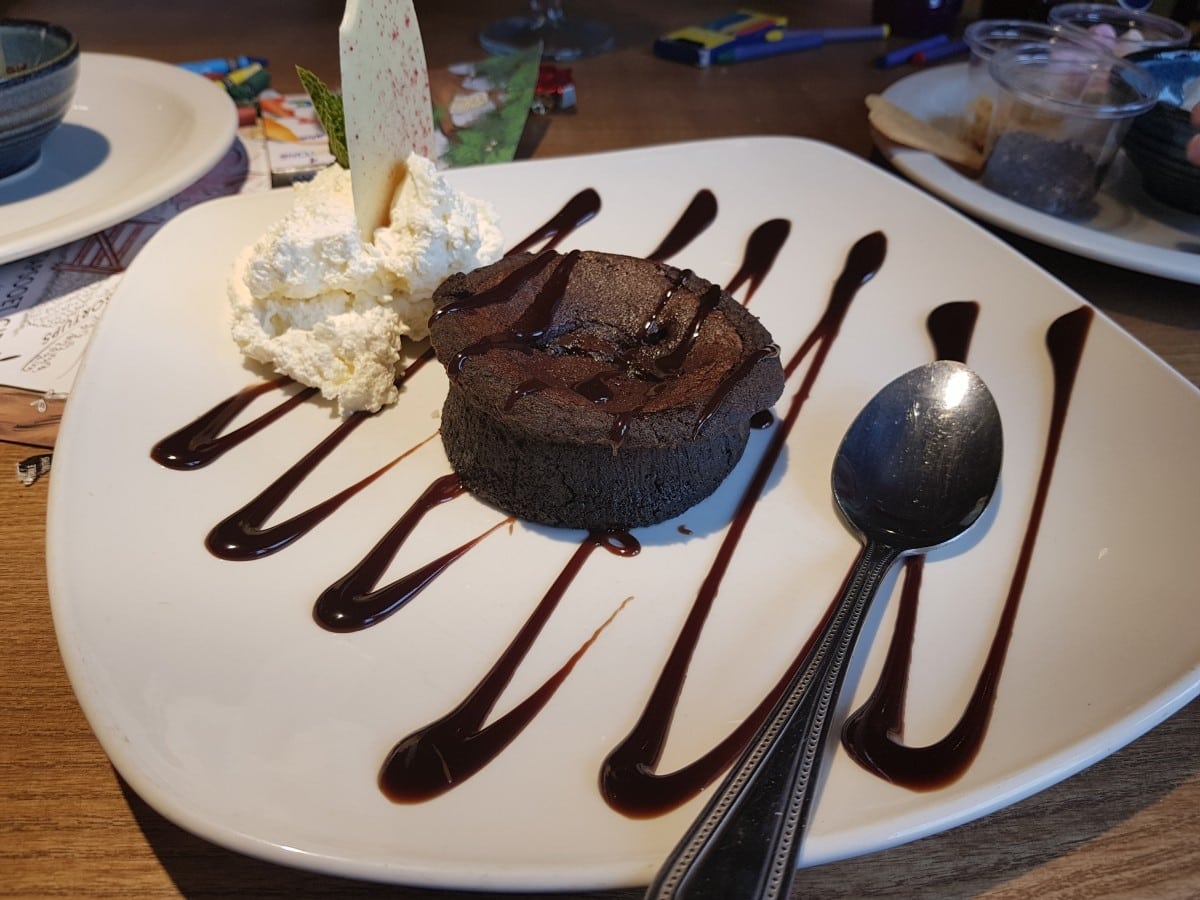 The pudding menu was really impressive with lots of choice, including a few healthier options, but Sam and I both promptly forgot we were doing Weight Watchers and chose indulgent puddings! I chose the Black Forest brownie, which had a slice of white chocolate and raspberry bark and was divine, and Sam had a Banoffee Sundae. The kids had a Make your Own Sundae, and went crazy for the crushed Oreo and marshmallows! There is a kids meal-deal of any main meal and an ice cream or fruit pot for £4.99 which I thought was really good value. 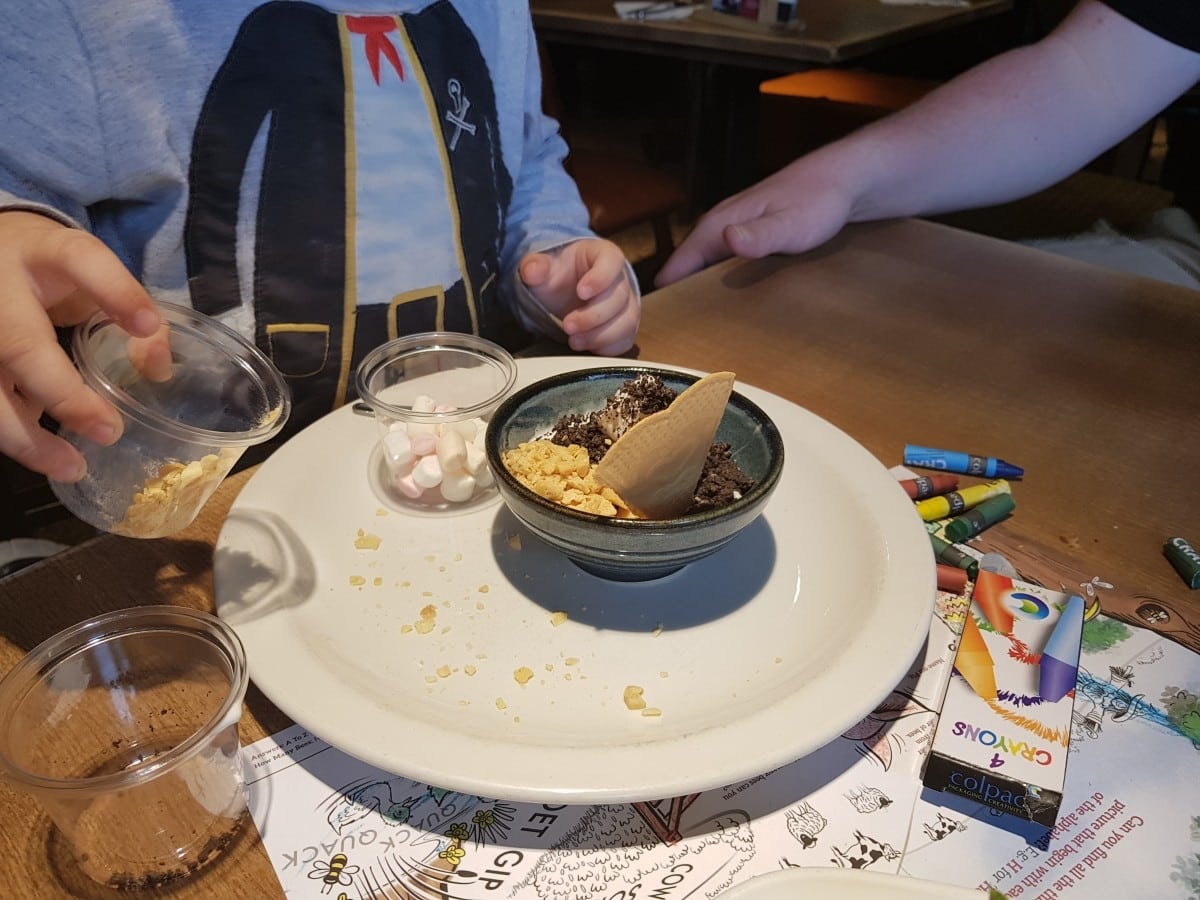 We’ll definitely go again, Toby Carvery is ideal for families as you don’t have a delay between ordering and getting your food, plus the refillable drinks are always a bonus too! Oh, and crayons and activity sheets kept the kids busy when they finished their food before we did (as we had second helpings of veggies!)

I think this coming week will be as hectic as the last, I’ve got a lot of work to do, Sam is working a couple of night shifts, Athena is at forest school, our sofas are arriving and then we’re off camping for the Bank Holiday weekend. On top of all that the fitbit I treated myself to tells me exactly how little, and how awful quality my sleep has been each night – not what you need whn you already feel tired!