I’ve got a BUMPER blog takeover post today, I’m away with family in the deepest depths of Norfolk and the internet here is next to useless, but I’m so glad I’ve got this post to share with you as it is one that I have LOVED reading because a USA road trip is on my bucket list and some of the places in the Midwest USA that Alisa has written about sound amazing. I’ve read all of Bill Brysons books and have fallen in love with some of the places he’s written about and this makes me want to visit America even more! You can read more about Alisa at the end of the post but here are three fun facts:

Although I’ve lived in the UK for nearly 20 years, the American Midwest will always be Home to me. I grew up near Chicago in northern Illinois where we had four proper seasons (often in the extreme!). In addition to being ‘The Best City In The World’, Chicago is also quite well-known: 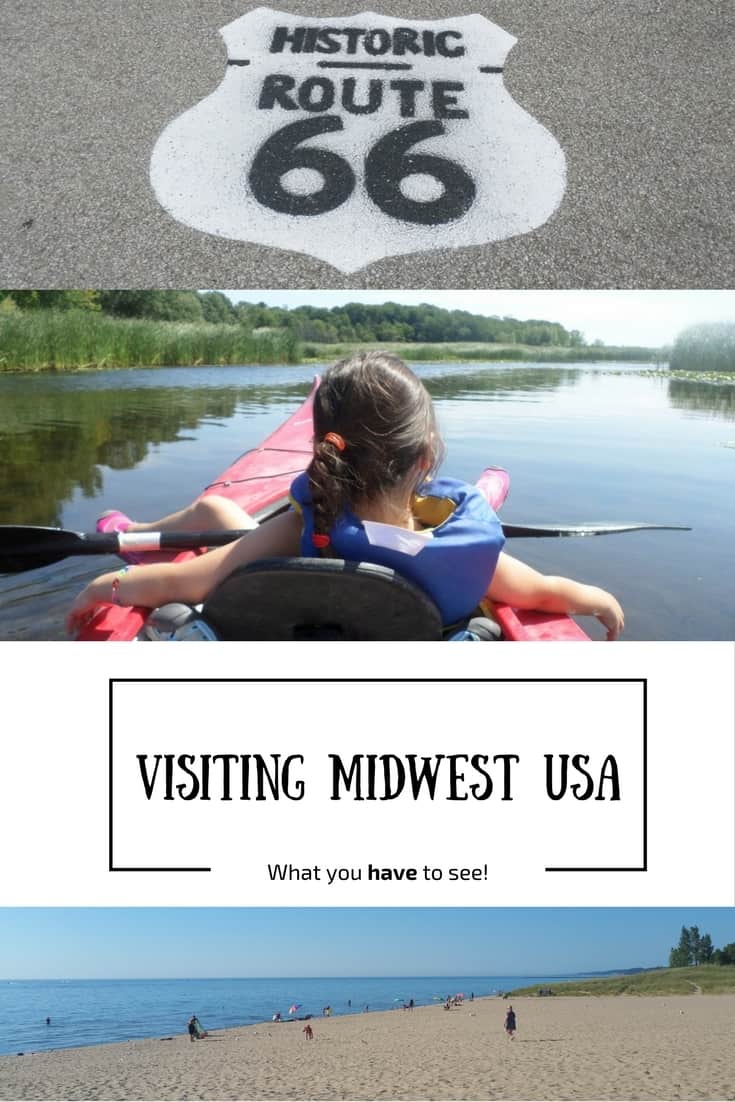 Yeah, Chicago is hands-down amazing! And if travellers venture between the coasts of the USA, Chicago has enough to keep them going for weeks. But if you were going to the middle of America and had a little time to spare, I would urge you to step outside the city limits because the middle of America has hidden gems you can’t image. Let me, a native, tell you about three wonderful little day-grips (or short-breaks) that you can take whilst still using Chicago as your base. It will be totally worth getting the flavour of The American Midwest.

Southern Michigan is the playground for Chicagoans looking to escape from the city. Chicago sits at the tip of Lake Michigan (the southernmost Great Lake). So a drive around the coast of the lake heading East will take intrepid travellers through Indiana and up into Michigan, a luscious and verdant state.

Douglas is about a 2 hour drive from Chicago and one of the most picturesque little American towns you will ever see. It is often linked with Saugatuck, a slightly more touristy though equally as charming town on the Kalamazoo River. The two sit side by side on the river, both with access to any water-sport you can think of.

Best things to do on a short stay 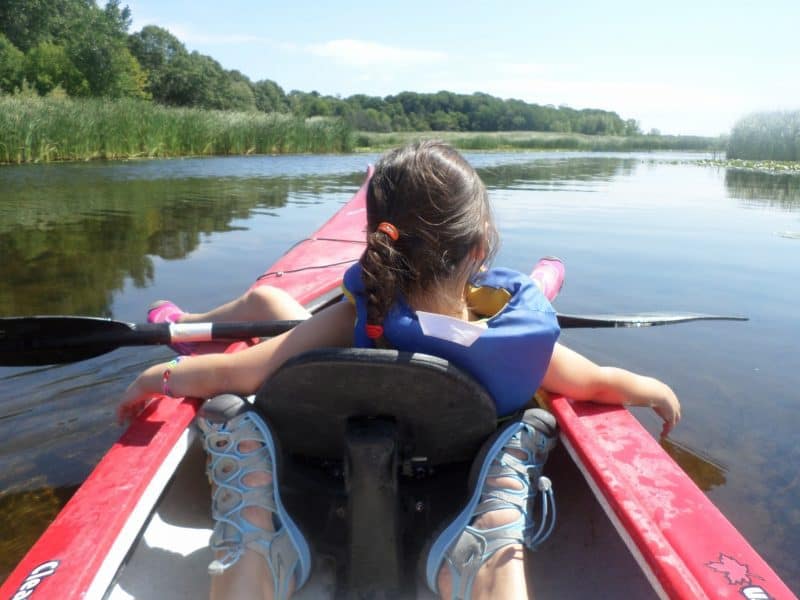 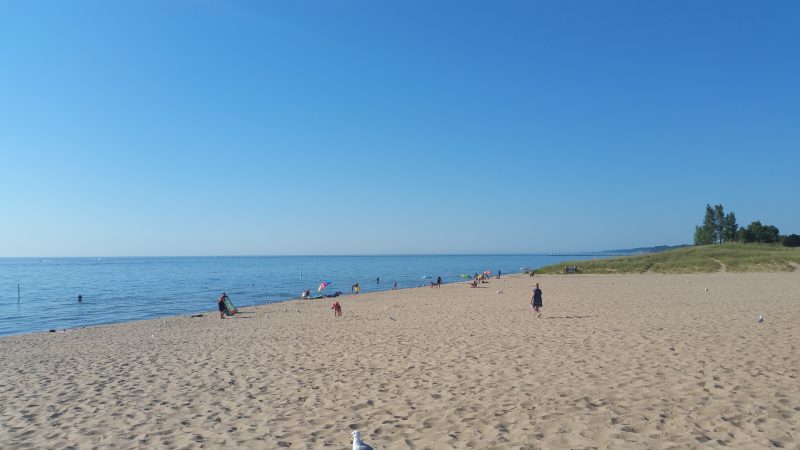 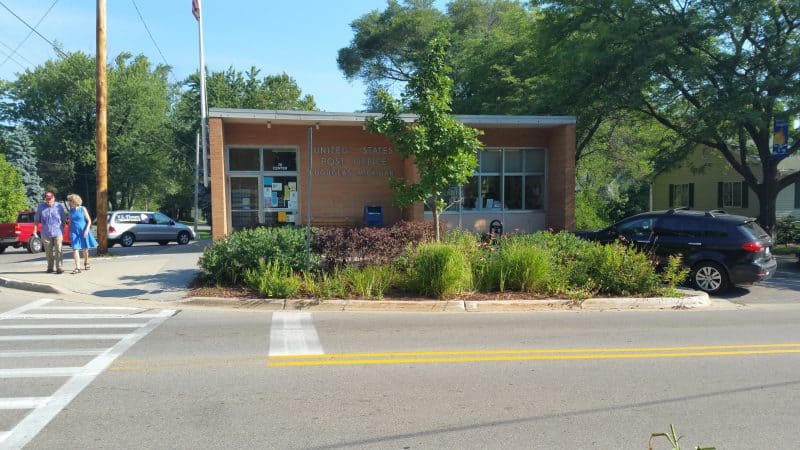 The Douglas post-office is an absolute must because it has That Post Office Smell that is peculiar to small-town American post offices. Kind of a combination of stamps, concrete floors and government issued cleaning fluid. This is a good thing- I promise. Go smell the post office!

Great places to eat in Douglas

Then after your lazy day, grab a carry-out pizza or grinders from Back Alley Pizza Joint or indulge in an evening out at Everyday People. I can personally and highly recommend both.

The great thing is that Douglas is perfect for families as well as for individuals or couples. And if you’re there in the summer, you can hear the music of the crickets and the sounds of the local Little League baseball games at the Douglas’ baseball diamond.

Douglas is a taste of small town America you really don’t want to miss!

Springfield is the state capital of Illinois and is considered ‘Downstate’ by the more populous north of the state (even though it’s pretty much in the middle of Illinois). It is well worth a visit to see the political history of Illinois, which in case you didn’t know, is also The Land of Lincoln. Yep- good old Abe Lincoln hailed from Illinois and Springfield does a fab job of presenting the history of the 16th President of the United States.

Springfield can be done in a day but is probably worth an overnight stay. You can take an Amtrak train from Chicago but the service is not the most reliable so it could be beneficial to hire a car and make the drive down The Mother Road; Historic Route 66. It’s about a 3 hour drive but once you’ve cleared the city and outlying suburbs, it’s a pretty, rural journey. Make sure you stop in Dwight, IL to experience the refurbished Route 66 Texaco Station and grab a bite at the Old Route 66 Family Restaurant.

Route 66 Americana abounds on the journey to Springfield so do a quick journey planner before you head off. 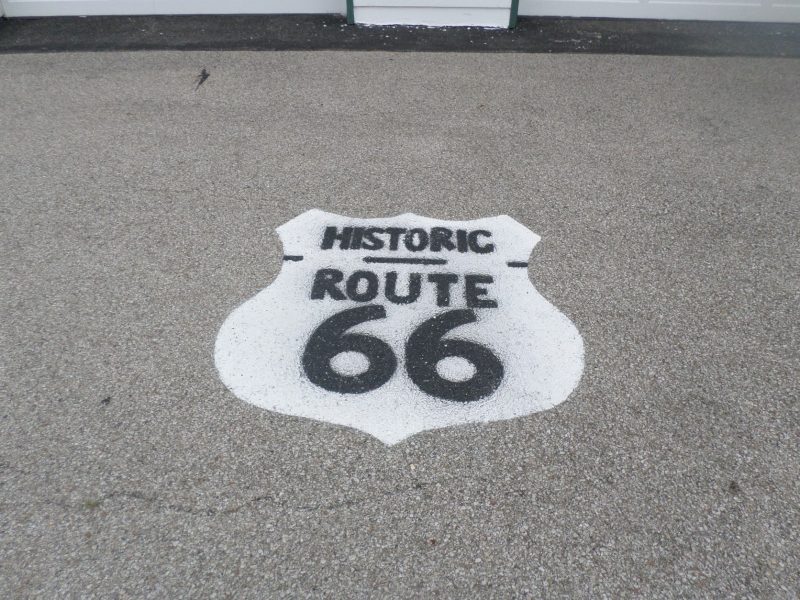 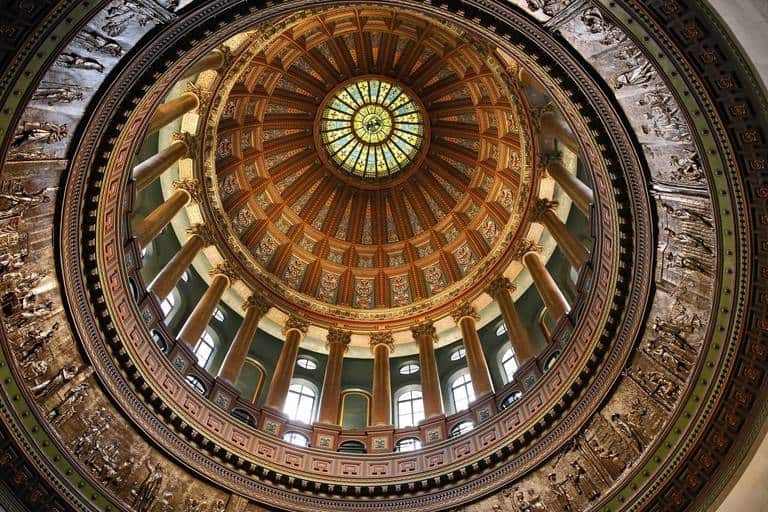 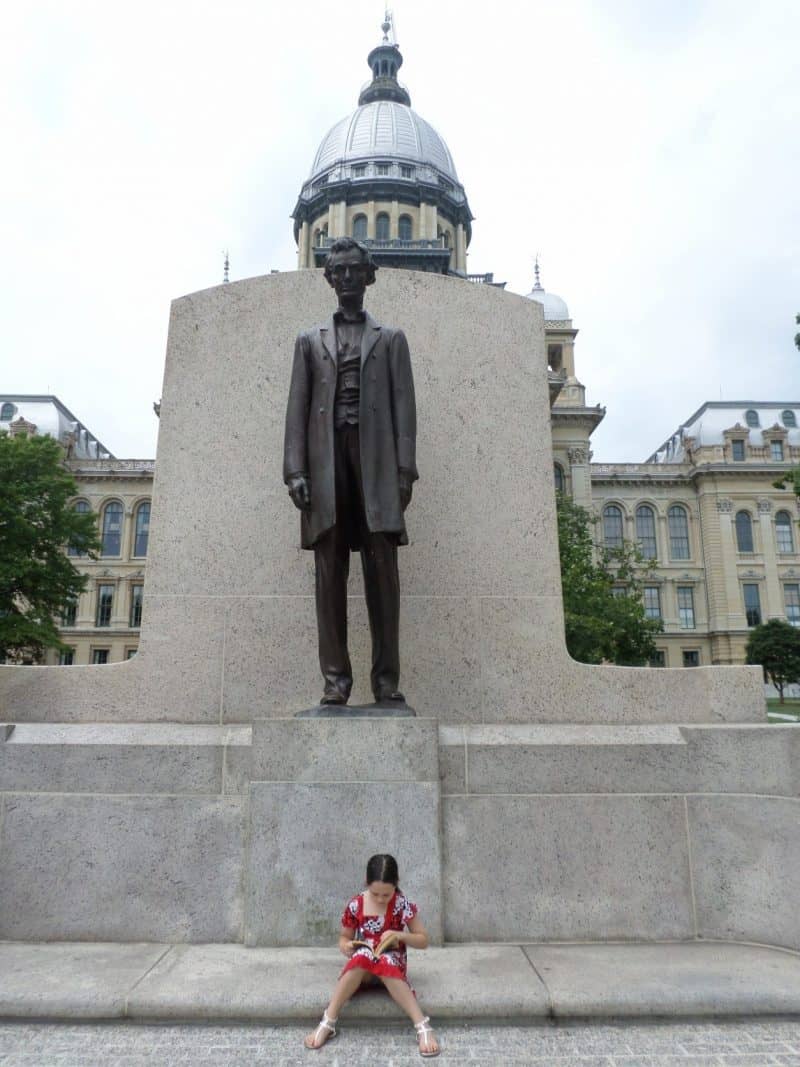 After your tour, have a wander through the sites of this historic neighbourhood which consists of 4 blocks restored to their 1860 appearance.

Also worth a visit:

Don’t forget to keep your energy levels up! 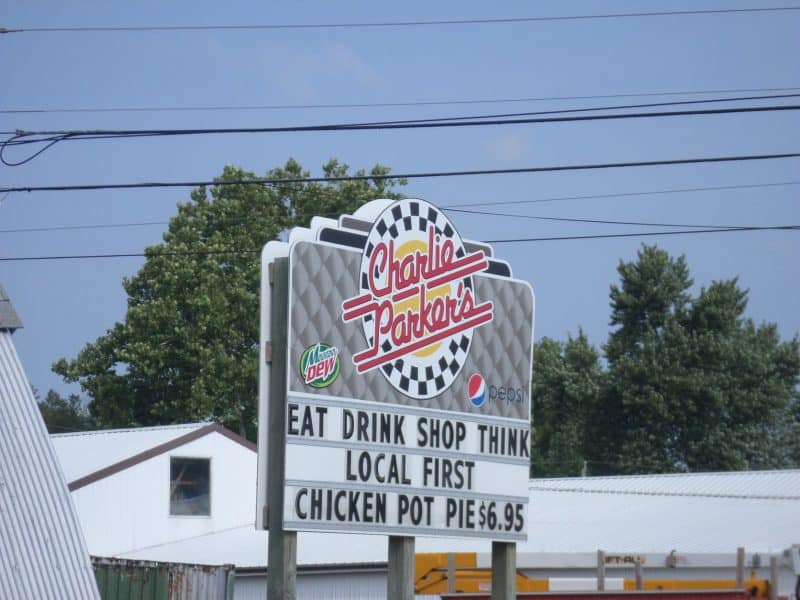 Finally, if you’re just looking for an active day out of the city, here’s what you do:

The Des Plaines River Trail is a fabulous trail running alongside the Des Plaines River all the way from Chicago up to the Wisconsin border and linking the wealth of protected native habitat composing the Lake County Forest Preserve. Anecdotally the trails are best maintained in Lake County (the county north of Chicago’s Cook County). 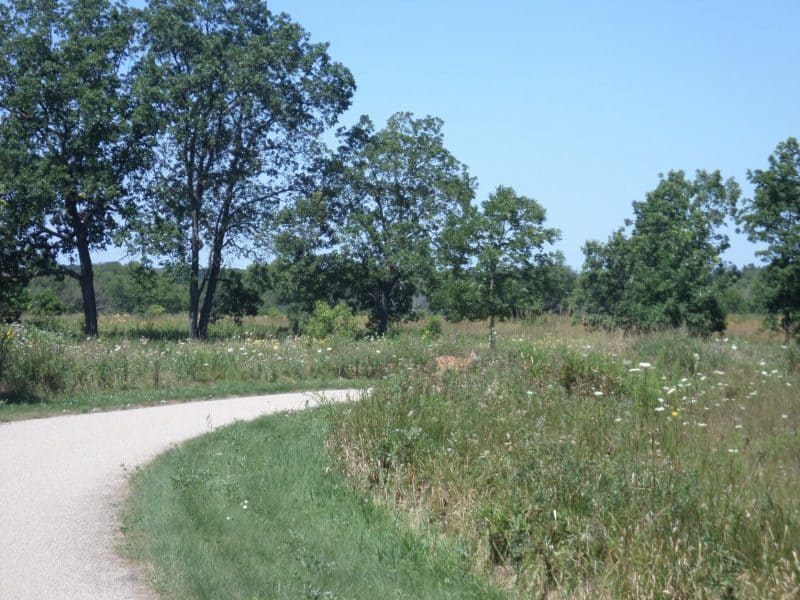 “Part of the trail’s charm is the way that it winds through woods, prairies, wetlands, and meadows.  One minute you’re riding in the shadows of large trees in the natural flood plains of the river.  The next, you’re feeling the sun beat down upon you as your eyes adjust to the bright light and varying shades of green as you cross Illinois’ version of a savannah.  All the while the trail continues curving from left to right, keeping you fully engaged in the ride experience.

While you feel as if you’re deep in the woods or alone on the great plains, civilization – suburbia – is never more than one-half mile on either side of you.  Whereas most trails like the Fox River Trail or Illinois Prairie Path offer short stretches of natural wonderment tucked between residential and commercial districts, the DPRT manages to string them all together continuously, keeping our day-to-day reality out of sight and out of mind.” (Blogpost- Brent Cohrs, Chicago Now)

I could extol the DPRT’s virtues ad infinitum but instead, I encourage you to try it for yourself! Your best resource guide and map is at TrailLink!

I hope I’ve convinced you to give The Midwest a try! It really is America’s heartland!

Alisa is a born American-Midwesterner who had a culture-reassignment operation nearly 20 years ago and is now British (by residency) though she does retain certain traits peculiar to the Midwesterner- like a love of sweet potatoes with marshmallows; rock-outs to John Mellencamp; and a retained ability to drive in snow. But that’s all rounded out by her addiction to proper tea (she travels with her own tea-bags now); her strict belief in Delia Smith as the answer to all of life’s cooking questions; and her ability to use the weather as a conversational opener.
Having survived her own upbringing with a raucous and fun-loving family, she went on to become a genealogist on the other side of the Atlantic so she could meet other people’s raucous and fun-loving families (even if some of them had been dead for a couple hundred years). Alisa still resides Island-side with her family and spends her time dreaming up new ways to exploit the endless familial archive of cheesy photographs and repertoire of, frankly, unbelievable ancestral lore. Seriously- ask her about her Grandpa Sam driving for Al Capone.

You can visit her blog UK Yankee here, and see her gorgeous book ‘The Baby Files’ on Amazon here, it is the sweetest way to remind you of all the little things that often don’t get remembered!

One thought on “Travel: Three Must See Places to Visit in the Midwest USA”