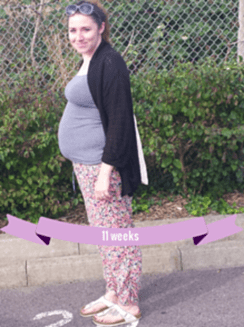 I found out I was pregnant again a lot earlier than I did last time (around 4 weeks this time) and for that reason I feel like I’ve been pregnant for half a year already! I’m going to try not to harp on about being up the duff all the time, but I might do monthly updates (probably more for me than for anyone else!) to keep track of things! Here is a little run down of what happened in the first three months…

Symptoms – Tiredness, nausea and the odd bout of sickness. It was never just in the morning, more of an all day ‘hmmm, I could throw up but i’m not sure’ feeling, made worse when I smelt something bad which was frequent as I now have a heightened sense of smell.

I’ve gone off tea for now (sniff sniff!) and some meat makes me gag (either at the thought or randomly half way through a meal, which is unpleasant for me and for whoever I am eating with!) Even typing ‘gag’ makes me gag…

I had some bleeding during the 5th week, and as it lasted more than a few days and hadn’t happened in my first pregnancy my doctor referred me to the hospital for an early scan a few days later. Luckily the scan showed a tiny little blob with a heart beat but they said obviously that it’s very early days but it was a good sign! The bleeding stopped a few days after that and hasn’t returned since, which was a relief as I was pretty worried!

Dizzyness, generally if I’ve not eaten for a while fairly obviously, and sometimes if I’ve been standing up for too long, like when I catch the earlier train home and have to stand because it’s packed!

Body – My bump started to appear around week 9, which was a bit of a shocker as I didn’t start showing properly till 15 or 16 weeks last time! Of course it doesn’t help that I had a fair bit of podgy middle left over that I never quite managed to get rid of from last time! I am regretting selling so many of my maternity clothes on ebay, so as soon as I had the scan I did a couple of well timed orders on New Look and Dorothy Perkins as they had discounted weekend sales on last weekend (sadly half of the bits I got were to long/didn’t fit right) Surprisingly nobody noticed the bump at work, apart from my (male!) area manager who was too nice to say anything but said he knew as I ‘carried myself differently’ too!

Feelings – No mood swings or anything (lucky Sam!) but then I never really get hormonal pregnant or otherwise! I’m obviously thinking a lot about how we will afford baby #2 but to be honest all we need is a cot, and even then not for a couple of months after it arrives. We have kept or loaned out everything of Athena’s, so have a crib/playmat/bumbo/jumperoo etc, and obviously a whole heap of girl clothes. If it’s a boy then we will need a bit of a more manly wardrobe but I have friends who have had baby boys recently who have already offered clothes if it is! My other worry is how will both babies share one room with different sleeping patterns? Athena was in her own room at 6 weeks as she slept for 6 hours or so, hopefully this one will be the same and then we will have it in with us for the rest of the night!

Movement – None so far!

Still no nick name for the new baby, we just call it ‘it’ at the moment. So I started the 14th week last Friday which means the picture above is three weeks old! I should really schedule in a photo every 2 weeks like I did with the last pregnancy so I can compare them, but I don’t think we started till week 18 last time and I already look that pregnant now!

Do let me know if you’re pregnant too, we can be bump buddies!