I decided when I found out I was pregnant that I probably needed to think about ending the current breastfeeding journey in preparation for the one that will start next year when baby 2 arrives. Every feed ended with a sharp bite which I was getting pretty tired of (also a little painful) and she was feeding for shorter and shorter periods too and often it was only one tiny feed a day. If Athena was still feeding lots during the day and not biting I would have considered continuing, and possibly tandem feeding when #2 arrived.

The decision was made for me really because I am going on holiday for 5 days without Athena in November, a holiday which I booked when I had no idea I would still be breastfeeding this far down the line. I thought that I would make a start on stopping with time to spare in case it was particularly hard so neither of us has to go cold turkey when I was away!

Athena doesn’t have milk or boob before bed time anyway which made the process a lot easier. On a day when Athena had only had one feed the day before and didn’t pester me for it in the morning I just decided that we’d see how it went with stopping. She had a bit of a tug at my top that evening but I distracted her with a new book, and the next day did the same. It took about a week for her to stop pulling at my tops, but generally distraction in the form of a toy or milk from a beaker works (I admit sometimes it’s chocolate nesquick as a treat, bad mama alert!)

The one time when it was a bit sad for both of us was when Athena woke up during the night when the last of this set of new molars arrived, a time when I would normally breastfeed her to a state of sleepiness then pop her back into her cot. Obviously this couldn’t happen so instead it was a syringe of calpol and some lullabies on my tablet in bed with me till her eyes started to droop and I could put her back to bed. Luckily that’s just happened once so far, and I wish she would still sleep in bed with us but she just launches herself all over the place and tries to open the bedside drawers with no sign of needing sleep, then as soon as she’s in her own room she’s sparko!

I didn’t get any leaks or engorged boobs luckily but I am still producing milk, which I assume is because I am pregnant and was only feeding once or twice a day anyway. I’m also free to wear a few clothes that don’t have easy boob access, till they stop fitting round the bump!

So, Athena was breastfed for 15 months, until I was 10
weeks pregnant. I’m pretty proud of that!

You can read my previous posts on breastfeeding here. 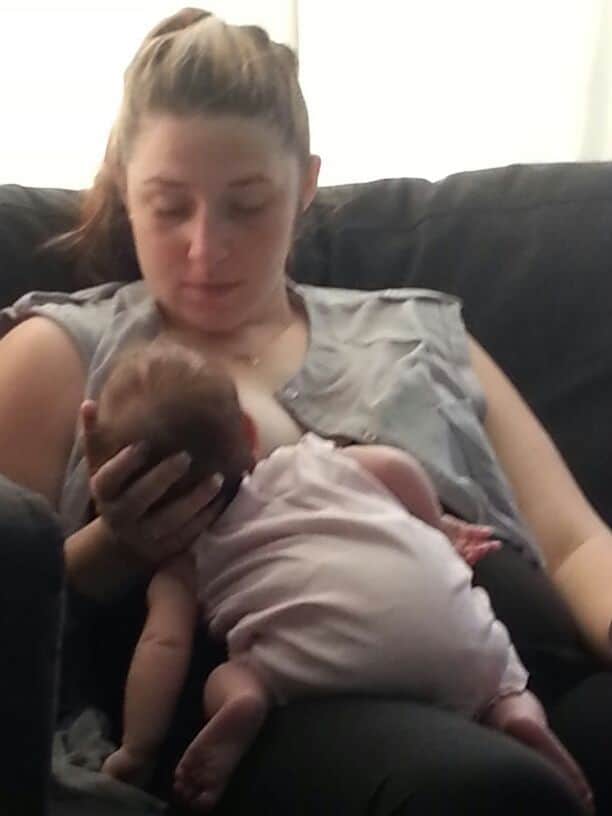 Four week old Athena having a feed! Sniff sniff… not long till I have another tiny baby though!

3 thoughts on “Breastfeeding – the end of this journey”