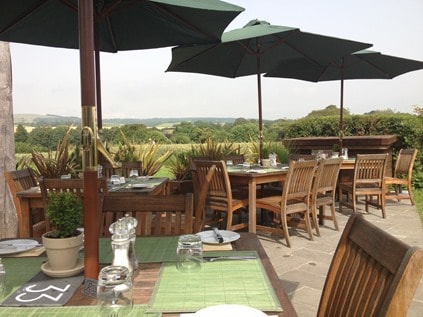 On Sunday Sam and I had a delicious meal out at the Earl of March in Lavant, just north of Chichester. A gorgeous location overlooking the rolling hills of the Downs, this homely restaurant was the perfect place to spend a leisurely baby free evening! 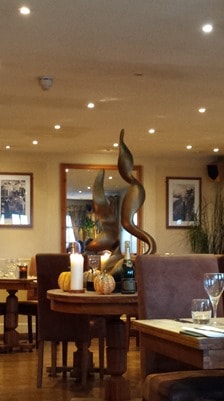 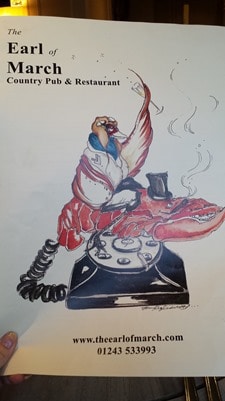 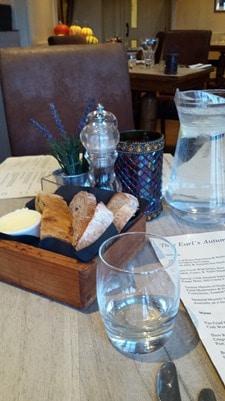 The restaurant has a lovely atmosphere, and had been decorated with a selection of miniature pumpkins and flickering candles, I loved the seasonal touch! On the walls are pictures from events at Goodwood just up the road, spitfires and vintage cars grabbed Sam’s attention right away! As we sat down a bread basket of mixed breads appeared, along with a jug of water whilst we browsed the menu. A small niggle is that the butter had just come from the fridge and was really hard to spread onto the bread! A specials board was propped up so we could see what was on offer apart from the main menu. 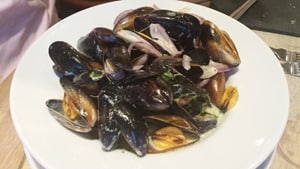 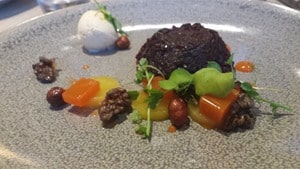 For starters Sam chose Steamed Mussels in Cider and parsley sauce, which was a hefty portion size for a starter (it’s available as a main too, I dread to think how big that would be!) and they were ‘melt in the mouth’ according to him! He was even presented with more bread to help him mop up the leftover sauce without asking, which was a nice touch. My starter was presented so nicely that I was loathe to actually start eating it, I chose the Tartin of Roast Red Onion & Beetroot, Goats Cheese Ice Cream, Carrot Jelly & Autumn Nut Salad. A mouthful of a name but it was delicious, all the flavours complemented each other and the nuts were the perfect addition. 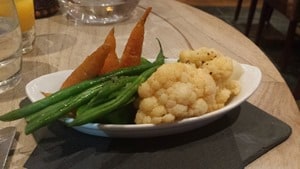 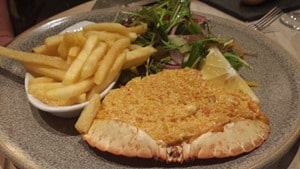 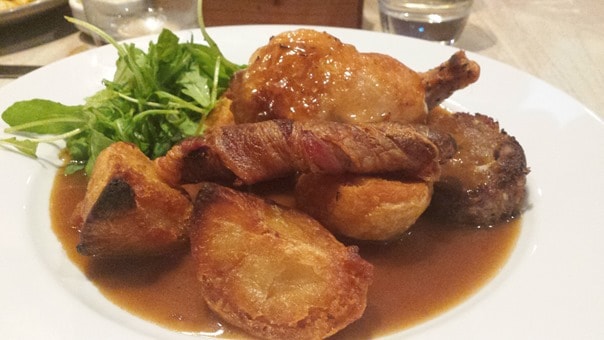 As it was a Sunday and the last day of ‘National Roast Dinner’ week I decided it would be rude not to try out a roast dinner, as  the description of the Corn fed Chicken sounded so appetising! The first thing I noticed that was the plate had plenty of gravy on it, something I adore! I am always that person who asks for another jug of gravy… A side of fresh seasonal veggies were served alongside, and the roast potatoes were so amazing I asked our server what they were cooked in! He said goose fat, then popped back a little while later to say he had spoken to the chef and asked exactly how they were done, then described it for me! I didn’t eat any of the greens that came on my plate (I am assuming rocket) as I prefer cooked veggies, but appreciate the touch of colour. The chicken itself was fresh and crispy, and the ‘pig-in-a-blanket’ was perfect too! Nothing to complain about whatsoever!

Sam decided to make the most of the seafood on offer (I don’t eat fish so he never gets it at home!) and had the Crab Thermidor which was served with chips and salad, and he had a garlic bread on the side too. We were informed that the crabs were caught by a local fisherman in Selsey down the road, and his wife then prepares them for the restaurant, I love knowing the exact origins of what we’re eating! Sam finished his meal with a satisfied look on his face, though he left a few chips and a slice of garlic bread! The chips came pre-salted which I don’t like, but Sam didn’t mind it but it is something to be aware of if you’re a non-salter like me! 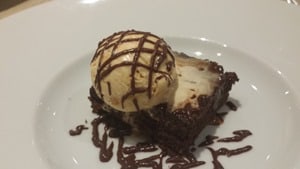 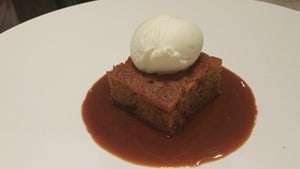 Of course, my pudding-stomach was ready and waiting even though I was full to bursting, and we chose the Triple chocolate Brownie and the Sticky toffee pudding and shared them between us. Both were moist and full of flavour, and warmed through. The Sticky Toffee came with Royal bourbon ice cream which was like heaven on earth!

The service was non invasive but attentive when necessary, with drinks replenishments offered and plates cleared on time. We even found out that one of our waiters was working his last shift that night just as we were leaving, and we never would have guessed as he was so friendly and on the ball! I know from experience that generally most people are a bit slack on their last day (or even week for some people that have worked for me!)

I would recommend a meal here to anyone, especially fish lovers as there are so many great fish dishes on offer, as well as ‘mini gastronauts’ menu which I think is a lovely idea! They are also taking bookings for Christmas, plus a set menu at lunch and dinner time, starting from £17.50 for two courses.

Our meal at The Earl of March was discounted but this in no way affects my opinions within this review.

One thought on “Dining out: Earl of March, Chichester”