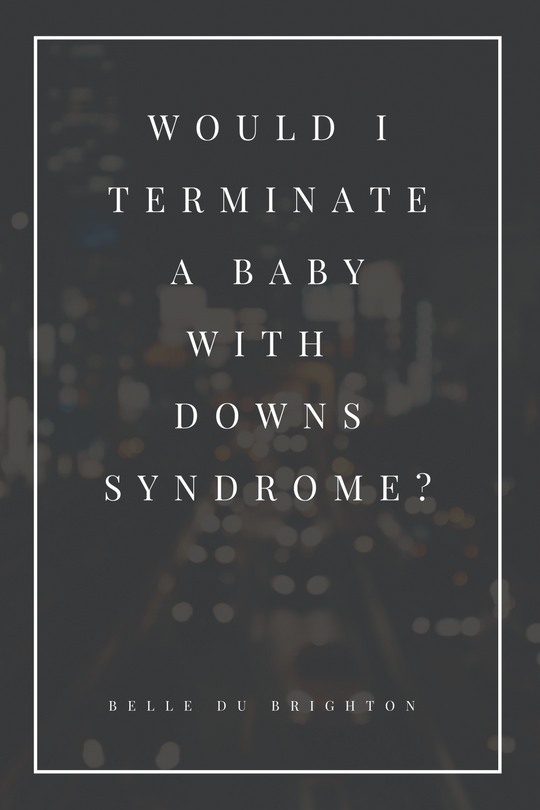 I, like many parents I expect, watched Sally Phillips last night on BBC’s A World without Downs. I had heard her chatting on the Scummie Mummies podcast a couple of weeks ago about her family life and the program, and why she wanted to make it. Sally has three sons, one of whom, Olly, has Downs Syndrome. The aim of her film is to get people thinking about what would happen if every pregnant mother knew their baby definitively had Downs Syndrome. A new blood test that the NHS is introducing can give a 99% accurate result without the need for an invasive amniocentesis test which carries a 1 in 100 chance of losing the baby regardless of the outcome of the Downs test. In her film she visits Iceland, where in the last 5 years NO babies with Downs Syndrome have been born. When the parents got the positive Downs test result they chose to terminate their pregnancy. At the moment in the UK the rate is nine out of 10 pregnancies being terminated after a positive result for Downs.

The organisation ‘Antenatal Results and Choices’ director has spoken about Sally’s program, claiming that she thinks it is ‘not at all helpful’ (talking to The Observer) and that it might make couples who have or need to make the decision find it more difficult to make. I think this is a good thing that people will have to think so much more about an admittedly very difficult decision. Personally I feel it is a big worry that the director of the main charity that people will turn to when they get that positive result is someone who thinks like this.

It’s really got me thinking about my stance on this. Before I had kids I didn’t want kids. I wasn’t maternal, I spent my 20’s working hard and playing harder and I couldn’t see where kids fitted into that. It turns out I’d just not met the right person, So meeting Sam and getting a bit older changed my mind and after being told that it might be difficult to conceive as I have PCOS. Actually it wasn’t hard in the end, I had two babies within two years. In the abnormality scans/Blood tests during my first pregnancy I received the news that there was a very low risk of the baby being born with Downs Syndrome. “Phew!” I thought. “I’d never be able to cope with a child with special needs, I’m far too self centred, I don’t have enough patience, I’d find it a real struggle”. But do you know what? Parenting is a struggle anyway, I still don’t have enough patience even now!

Why was my mindset like this? Two reasons really; when I was 16 I helped out for three weeks at a summer camp for children with Severe learning disabilities, some of whom had physical disabilities too. Each day was testing, tiring and stressful at times. I collapsed on the sofa at the end of each day feeling exhausted. But at the end of those three weeks I also felt a huge sense of achievement, one that I’d forgotten about until I spent a few quiet minutes reflecting after watching Sally’s program last night, triggered by the immense sense of joy she and other mum’s of kids with Downs have. Hayley who writes ‘Down’s Side Up‘ has a daughter called Natty who is a true delight, you can tell from her videos and also the clip within Sally’s program what a sweet, caring and wonderful girl she is. Would we really want a world where these people slowly disappear?

The second reason that I thought that I wouldn’t be able to cope with a special needs child is because of the experience Sam’s family had when his mum had her first child. His brain never fully developed during his gestation and he had severely lessened mental functions and hardly any physical movement. He needed round the clock care as he couldn’t talk, feed himself or even sit up by himself. Despite only being given a few years to live Hayden lived till he was 18, and we gave Arlo his name as a middle name in memory of him. Now this sort of disability is very very different from someone with Downs Syndrome (although there is a scale of severity) But I can only imagine the sort of strain and pressure that something like this could put on a family, not to mention the incredible feelings of loss when he died. Could I go through that? I’m not sure I am strong enough, but if I wasn’t given the choice I would have to be wouldn’t I?

What if the NHS routinely tested for other chromosomal abnormalities other than Downs that might mean a parent wanted to abort their pregnancy? She asks whether we really want to live in a world where we chose exactly who is in it? Is anyone reminded of Hitler’s stringent opinions on who should and should not be able to live? That may sound extreme but we live in a world where we really can ‘design’ babies. I have always said I am ‘pro choice’, but as I write this it may not seem like it, I wouldn’t think it was fine if a child is aborted because it had the ‘wrong’ hair colour or was likely to have asthma for example. Now, after watching Sally’s program and seeing her interact with so many people with Down’s Syndrome who live perfectly happy lives, I don’t think I’d even get that test to see if my baby was likely to be born with an extra copy of a life altering chromosome.

12 thoughts on “Would I terminate a pregnancy with a Downs Syndrome baby?”