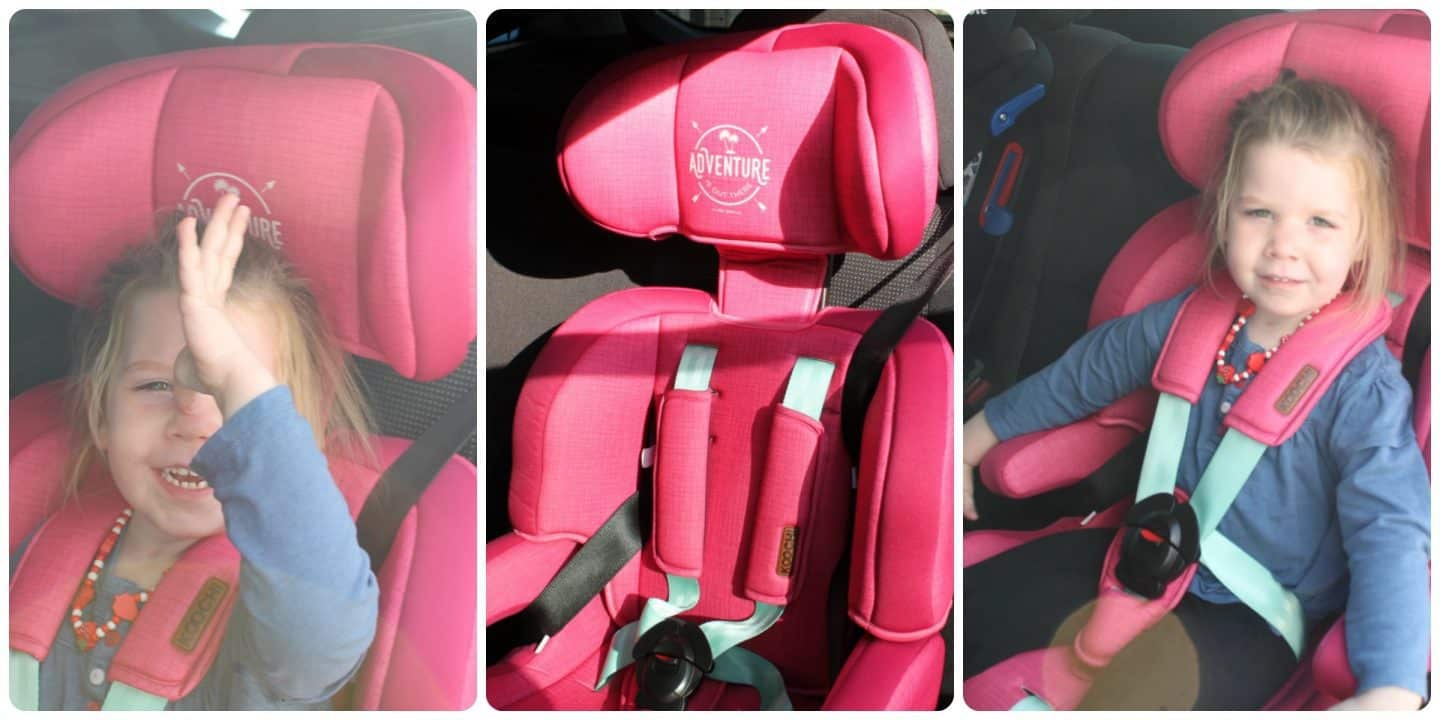 The Motohero cat seat from Koochi is a group 1/2/3 seat meaning it can be used from around 9 months of age up to 12 years, when your child no longer needs a booster seat. There are a few designs available, two of which are new this season; pink hued Havana which is what Athena chose or turquoise and mint Bali, which I actually prefer but seeing as I’m not the one who’ll be sitting in it I went with her choice! It arrived in one box containing two parts, to assemble you just need to click the back of the seat into the bottom part. The harness is already attached to the seat, but you of course might need to re-thread the shoulder straps into the correct height of the three options.

Adjusting the harness once is really easy, there is a button above the pull strap  and when you press it you can lengthen the shoulder straps really easily, far easier than the old britax seat which I always struggled with. You then pull the strap to tighten easily to keep your child safely strapped in. The BEST bit is that in a month of use the straps haven’t got twisted going through the buckles which happened with her old seat and does with Arlo’s current one too. It is the single most annoying thing when a strap is twisted and you have to sort that out whilst dealing with a kid who doesn’t want to be in a car seat at all whilst you’re already running late with your backside stuck outside in the rain, but it doesn’t happen with Motohero, hurrah! The catch is also stiff enough that it can’t be undone by the child but not so tricky that you need an engineering degree or the strength of a bodybuilder do undo it. 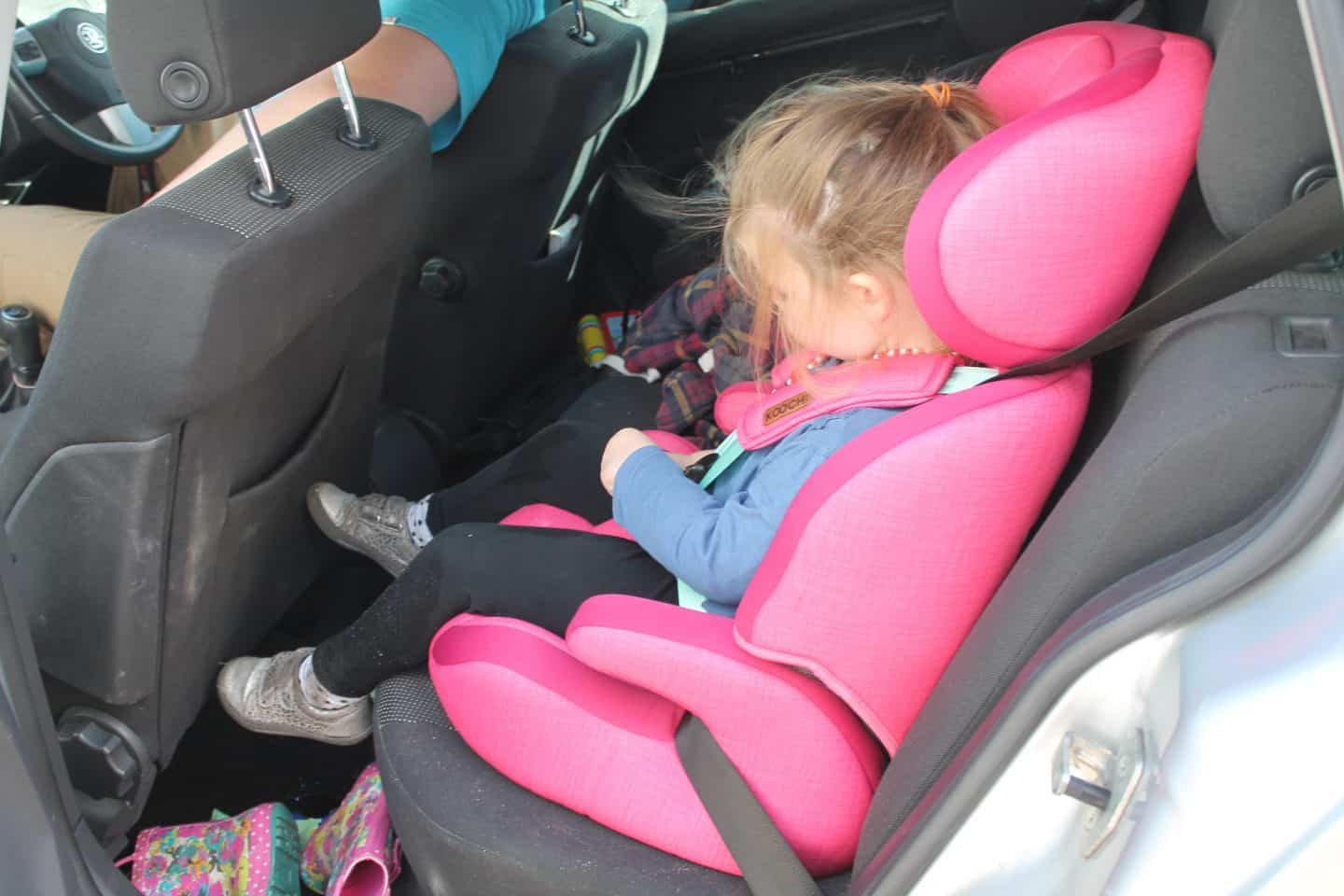 The headrest can be slid up and down to find the right fit for your child, Athena is three years three months old in these photos but she’s really tall (in 4-5 ages clothes) and still has it on the lowest setting, so I think she’ll be fine in this up to the time she is no longer required to use a car seat. There are two sets of removable padding so you can get a good fit, Athena has decided to keep the seat part for now  after a few experimental journeys (though it isn’t in place for these photos) and remove the top part that gives extra torso support as she’s more comfy without it.

I was really hoping for my sake that I’d not have to deal with washing the covers, but on our way back from the Lake District Athena christened the Motohero with a little car-sick incident. However because of this I can tell you that ALL the padding and straps are removable and washable (again, unlike many other car seats where one or more parts can’t be washed and therefore retains an odour…) and although I found it really tricky to get the cover off the base Sam managed to get it back on really easily. There is a really soft tummy/crotch pad for maximum comfort and two padded shoulder straps too. 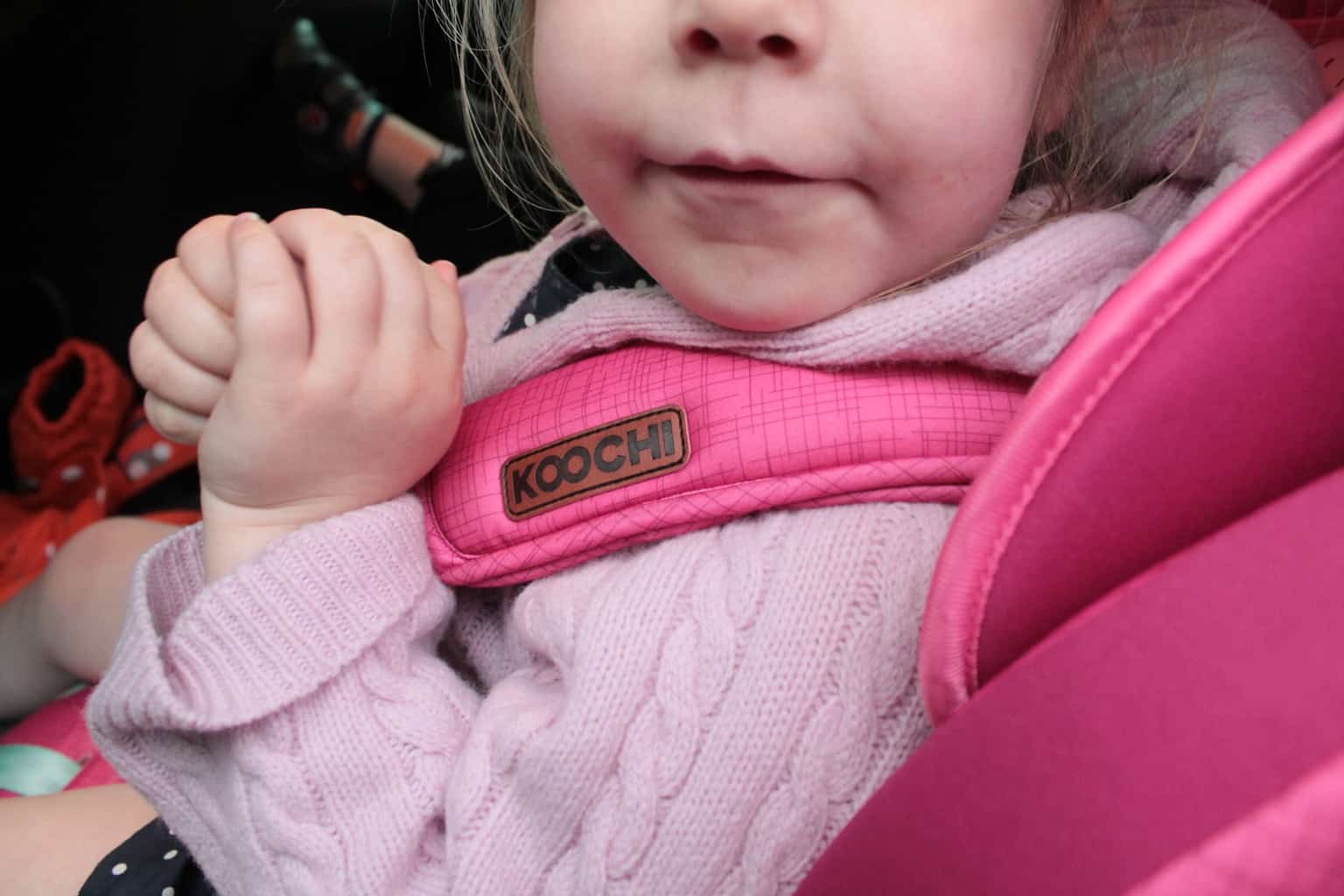 As it’s a group 1/2/3 seat you can also use the seat with a regular three point harness instead of the inbuilt one when your child is big enough, and when the harness is in use it is easy to fix the chair into your car with the seatbelt (front or rear seat) with the clear and obvious belt paths marked out on the seat. There is even a little flap for the instruction manual to live in on the back of the seat so it’s handy if you switch between cars and need to refer to it. 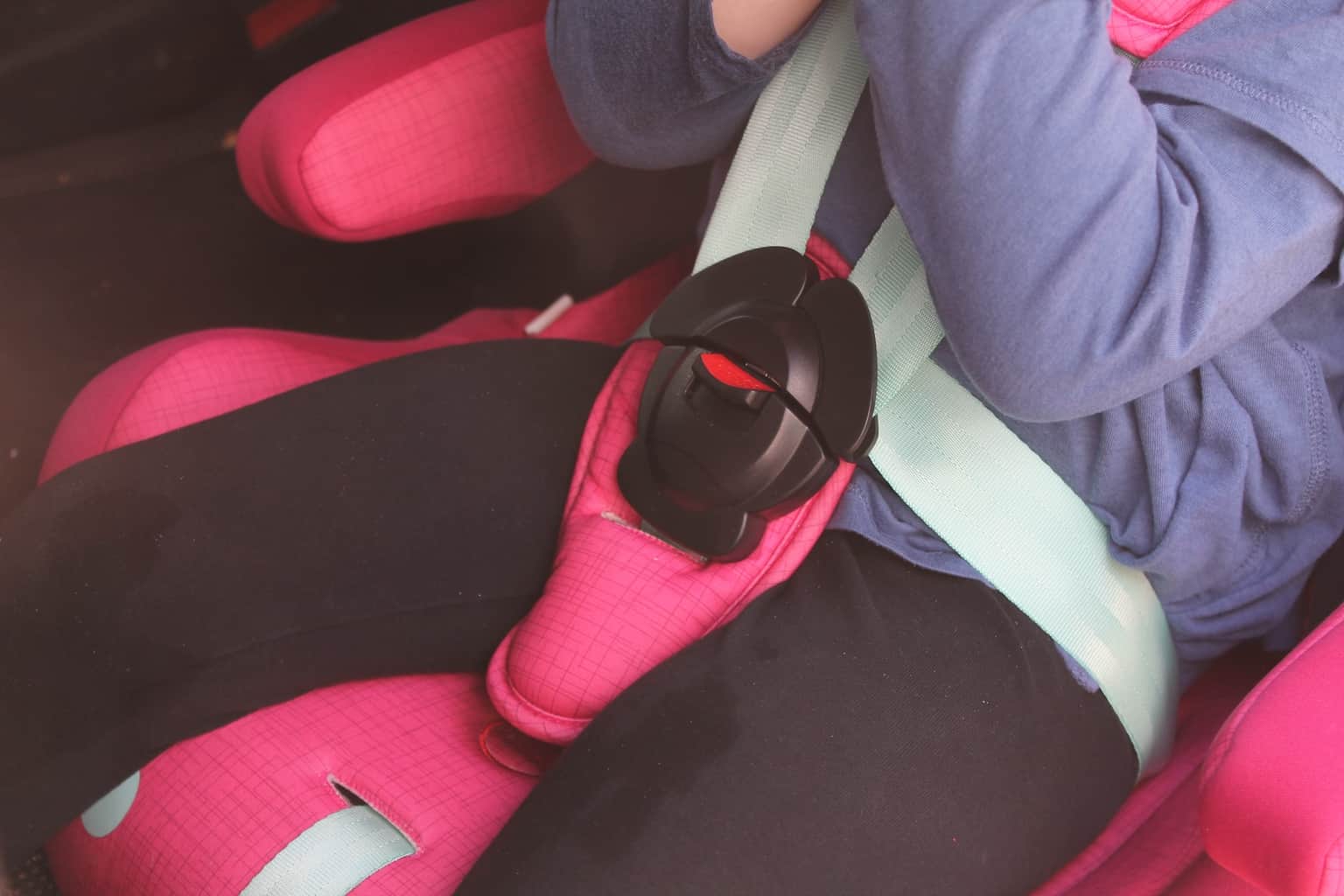 What could be improved:
There is no drink/snack holder, although not essential it is something that I find handy to keep things a bit tidier in the car. I also think the head rest could be improved, Athena still naps in the car and sometimes her head drops forwards and looks awkward. It doesn’t actually wake her up though, but it just doesn’t look comfy! It did improve when we took the top part of the padding out as she was further back in the seat but does still occasionally happen, so worth bearing in mind if you still have a napper and do long trips! For the very reasonable price though this seat outperforms others in the same price bracket in my opinion. 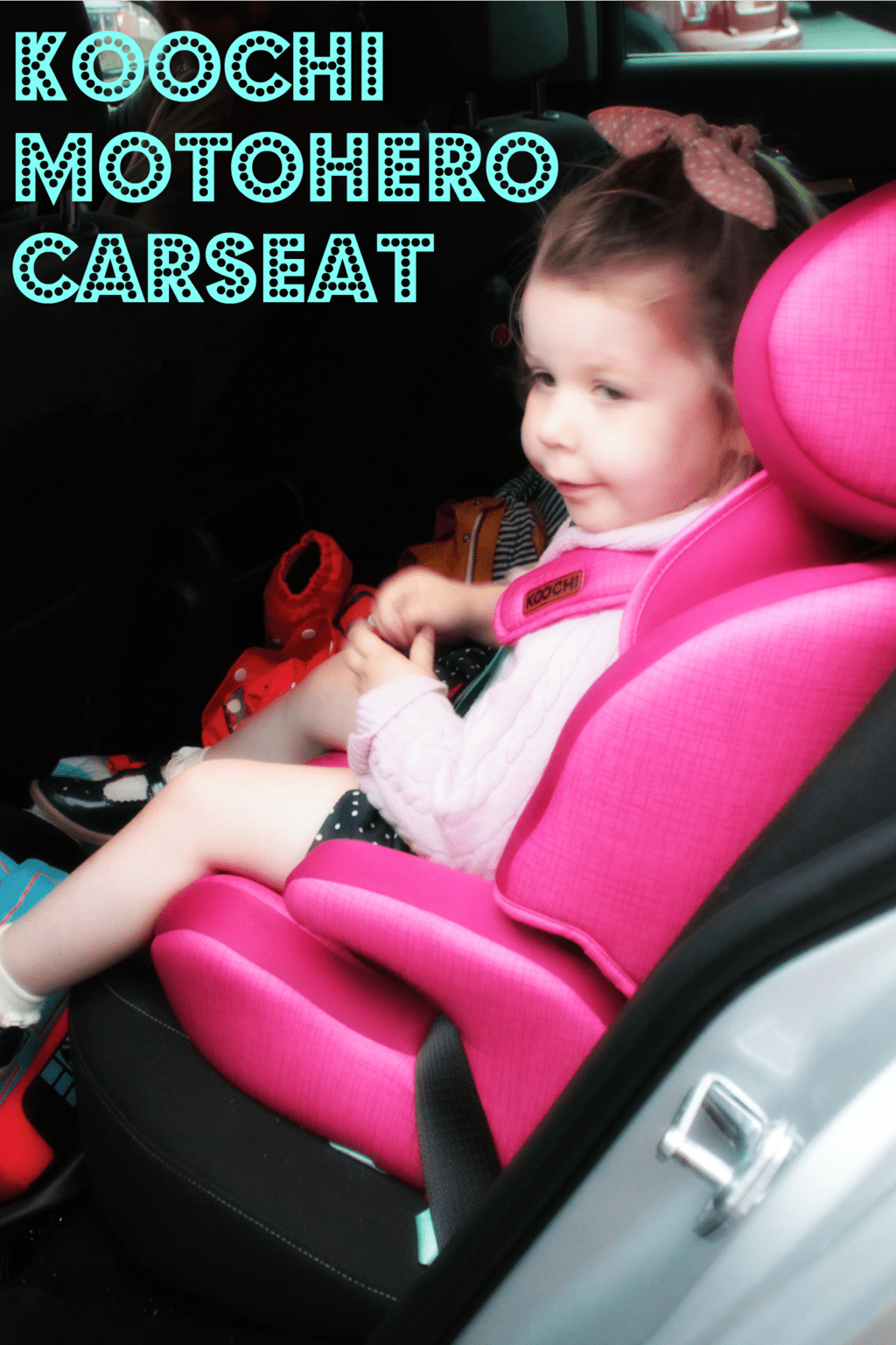 The Motohero retails at £100 via the Koochi website but can sometimes be found cheaper on Amazon. It has a four year warranty too which gives great peace of mind! You could even get a matching stroller too!

We were sent this car seat for the purpose of this review, all words and opinions are my own.