On Sunday I had a leisurely lunch at YO! Sushi in Brighton. I took my friend Katie and we probably weren’t the

ideal diners for a sushi restaurant; neither of us eat seafood and Katie is a vegetarian. However we both left comfortably full having found loads of different dishes to scoff, way more selection than I thought there would be for a non fish eater! 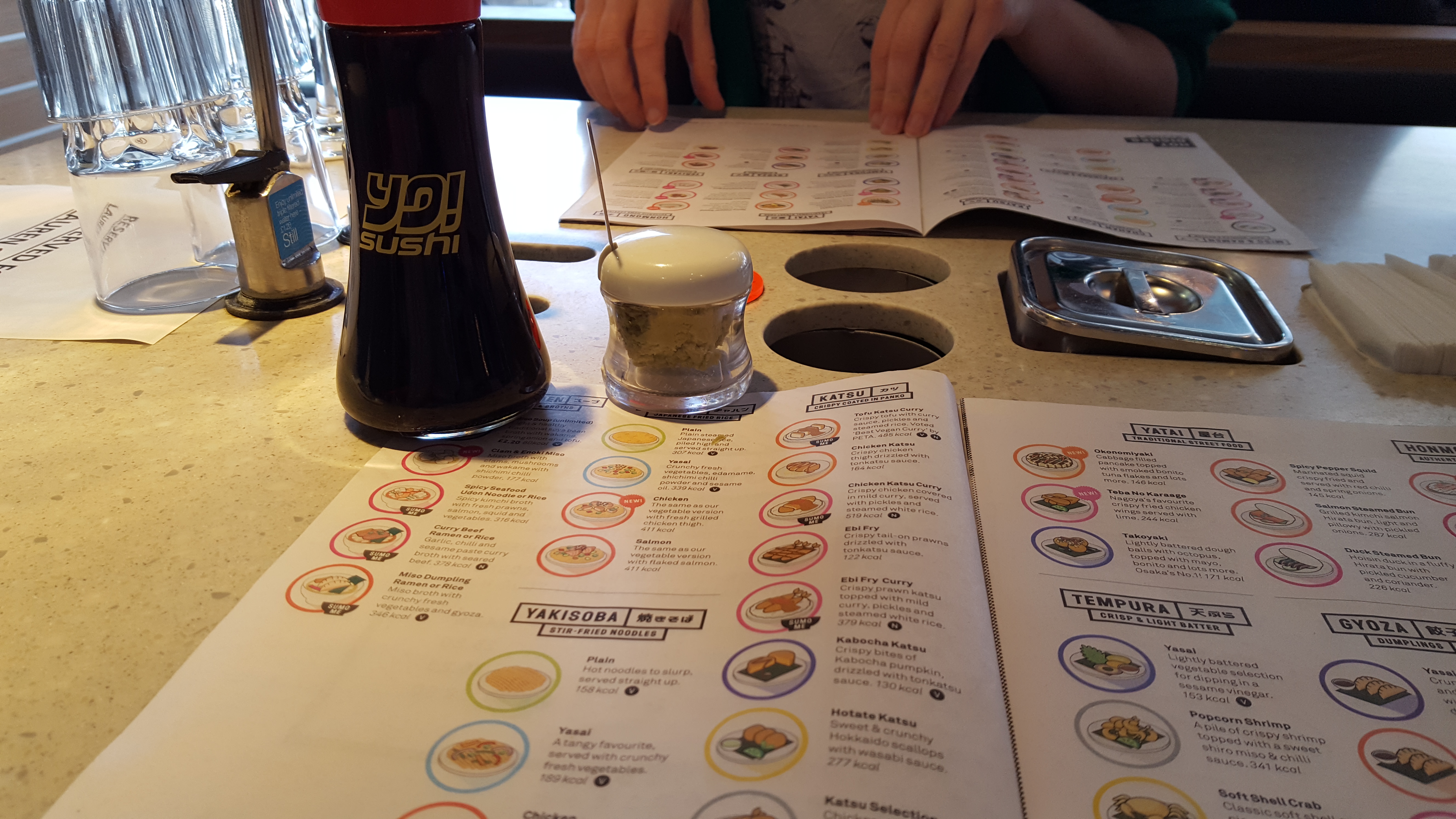 If you’ve not been to Yo Sushi before then you’re in for a sensory treat; a conveyor belt carries dishes around so you can pick what you fancy as you fancy it. The tables are equipped with still and sparkling water taps, chopsticks, sliced ginger, wasabi & soy sauce. There is a menu of dishes to choose from as well as the conveyor belt dishes and each dish is colour coded. You stack up the dishes and at the end of your meal you press the ‘help’ button to call a team member to come and tot up the total. 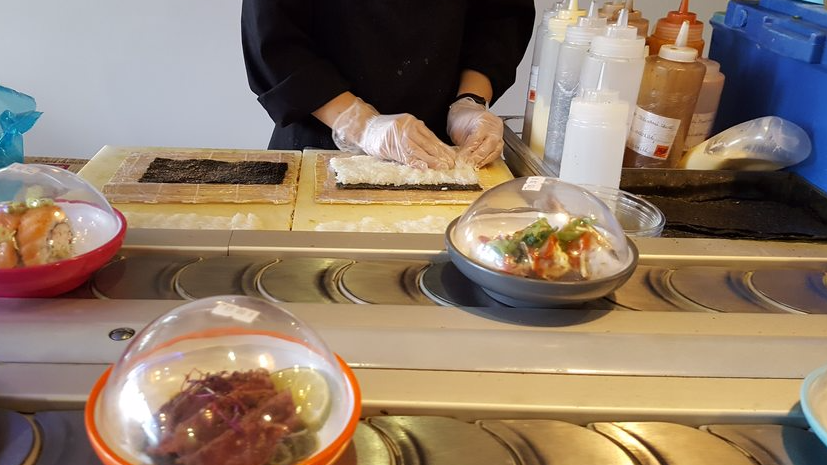 Behind the conveyor belt you can see chefs preparing the food which is always something I find fascinating, especially when the food they’re making is a different cuisine to what I’m used to seeing prepared! It also means everything is being done to tip top standards, as reflected in a 5 on their ‘Scores on the doors’ rating, the highest you can get.

We chose a few hot items and ordered them from a waitress, who typed everything into an iphone not a note pad, which she then pocketed and carried on with what she was doing! Very slick and also good for the environmental and time saving too! We then watched for side dishes coming our way on the conveyor and nabbed them as they went by, and our main meals arrived not long after that. I’ll say now that it is quite easy to get carried away picking dishes from the conveyor belt, especially when it comes to puddings! 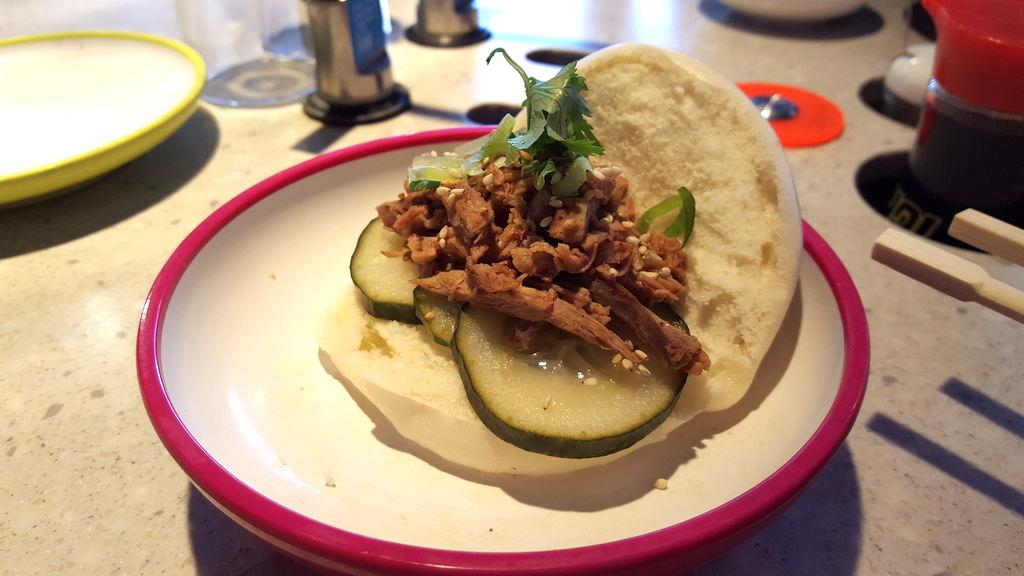 My favourite dish was the Duck Steamed Bun, which came with pickles and cucumber in a really soft and fluffy Hirata Bun, closely followed by the Teryaki beef,  which was really moreish, glazed in a garlic and soy sauce. As sides we had Kappa rolls (cucumber) and Kaiso Seaweed. Katie had Kabocha Katsu (pumkin) and vegetable gyoza (Japanese dumplings) and then we attacked the puddings with ferocity… meaning that neither of stopped to take photos, whoops!

I only remembered the Chocolate mochi balls from my last visit (probably around 2010!) which are sweet gooey glutinous balls with a ganache centre, which were still really tasty! But the two new sweets were actually even better, The Matcha Roll is possibly my new obsession, it’s like a swiss roll only tasting like green tea with fresh cream instead of jam. It really was ace, so fluffy and light! We also shared a Japanese Souffle Cheesecake which was also nice and light. In fact I think I should explore more Japanese food as it’s all so light but still filling. You don’t get that bloated feeling you do after a roast dinner, for example, but still feel pleasantly full! 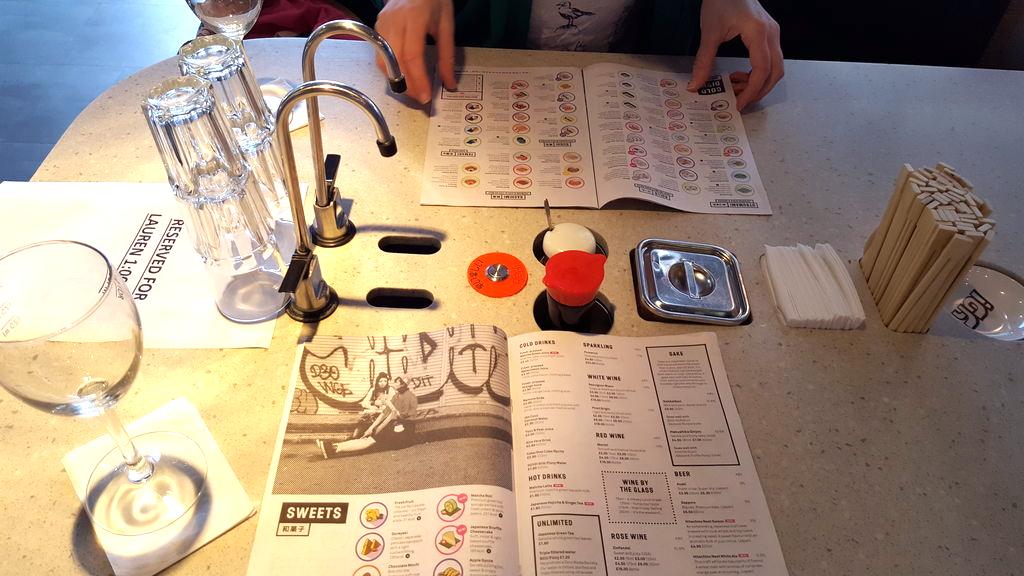 Yo! Sushi serves wine by the glass in four different measures, from a 75ml ‘lunch break’ size to a 250ml ‘its the weekend!’ size. They also do an unlimited Green tea option, and Katie had a hot Matcha Latte which was bright green, looked ridiculously like a potion from a Harry Potter book but tasted really good! There is the normal selection of Japanese beers and Sake too of course. 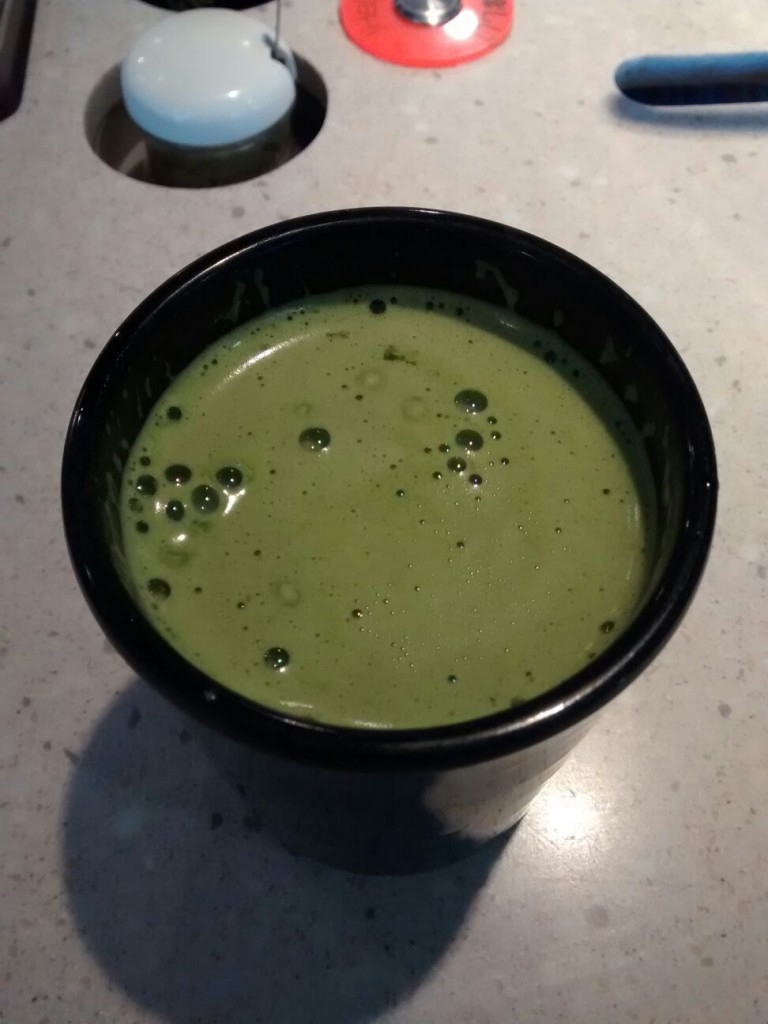 The only negative I could find was that neither of the ladies loo cubicles had paper in when I went to the loo before we left, thankfully a nice woman in the queue in front of me had realised this and stocked up from the disabled loo and gave me some!

Although I didn’t have the kids with me I think it would actually be a great place to take kids, especially if they get bored easily at a restaurant as there is so much to look at, and not a long wait for food either. I think we’ll be back with Athena soon and see how we get on!

I was invited to experience a complimentary lunch at Yo! Sushi, all opinions are my own.

3 thoughts on “Eating out: Yo! Sushi – Brighton”