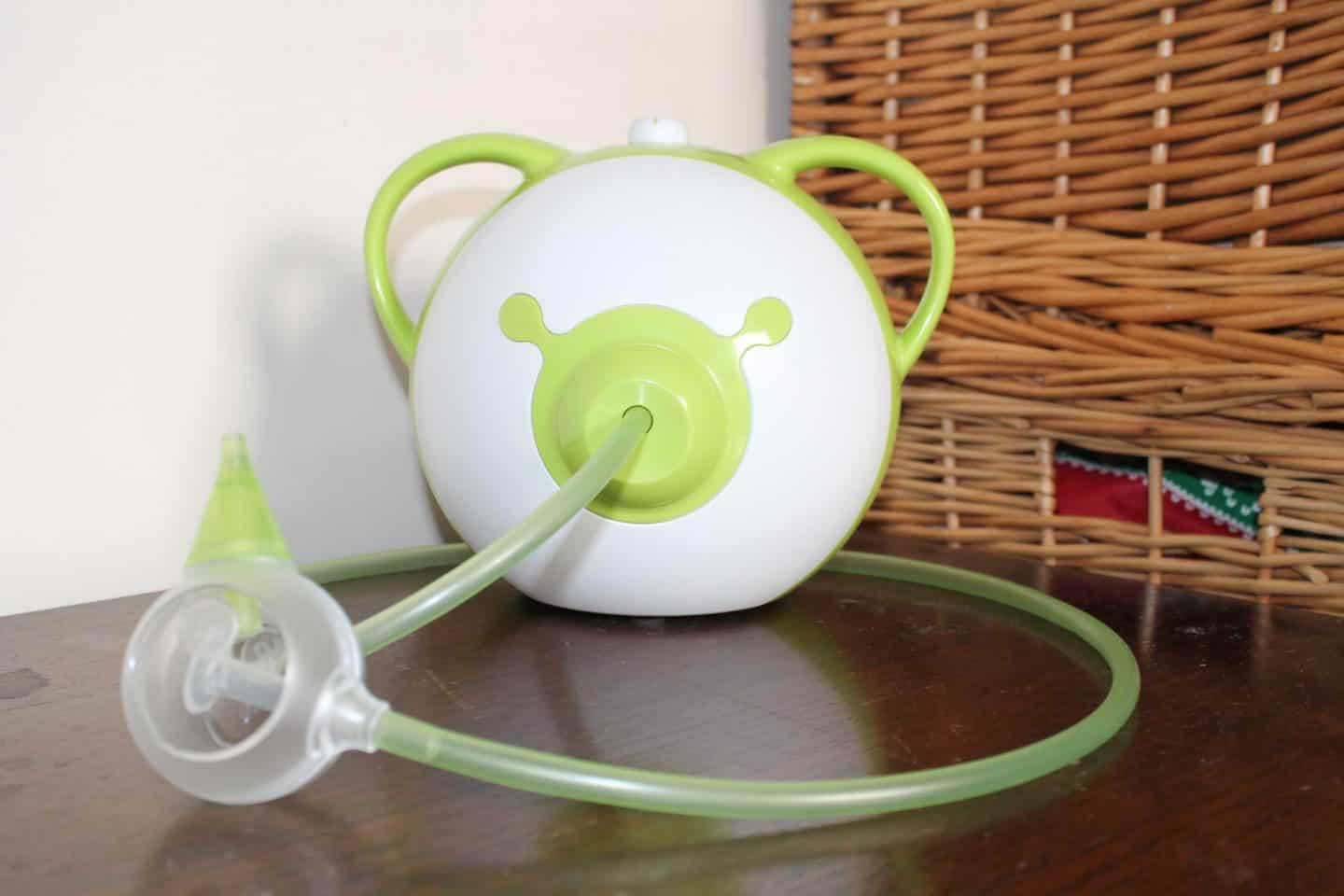 Whenever people ask me what’s on my essential baby buys list I always mention our ‘snot sucker’ or nasal aspirator if you want to use the correct term. They’re love hate amongst parents but I think they’re really helpful and we had two manual ones already (the bulb type) that I thought worked quite well. That was until the Nosiboo arrived at our house and snot removal got REAL! This thing is like the KING of nasal aspirators and I love it.

I had often mused about why nobody had made a hoover for noses, even before I had kids and was just suffering with a stinking cold myself. It never occurred to me that they might exist, and then I realised that they did in hospitals for really bunged up kids but when Nosiboo emailed to see if I would be interested in putting one to the test I was over the moon (yes, seriously… funny how what makes you happy changes when you’re a parent!)

The Nosiboo consists of a bulb with a soft rubber nozzle, a long tube and the nosiboo itself which plugs in the mains. No snot can get into the machine or even the hose due to the clever design of the bulb. Now I was thinking about sharing pictures of how well this really works but then nobody wants to see a snot picture on the internet, potentially when they’re eating their breakfast… and if you’ve got a small child you probably see enough snot anyway. But suffice to say the amount of mucus that got removed from both Arlo and Athena in one sitting was enough to almost fill a teacup! Both kids had a cold for almost a week and tended to be really snotty for the first hour of the day as all the mucus from overnight got jiggled about and worked its way out of their noses (And slowly down their faces!) so I waited for half an hour after waking up to let them run about a bit to dislodge it and then sat them down with the nosiboo for a sucking session, Satisfying for me and helpful for them both! I then used it throughout the day when needed, before meal times and naps especially. 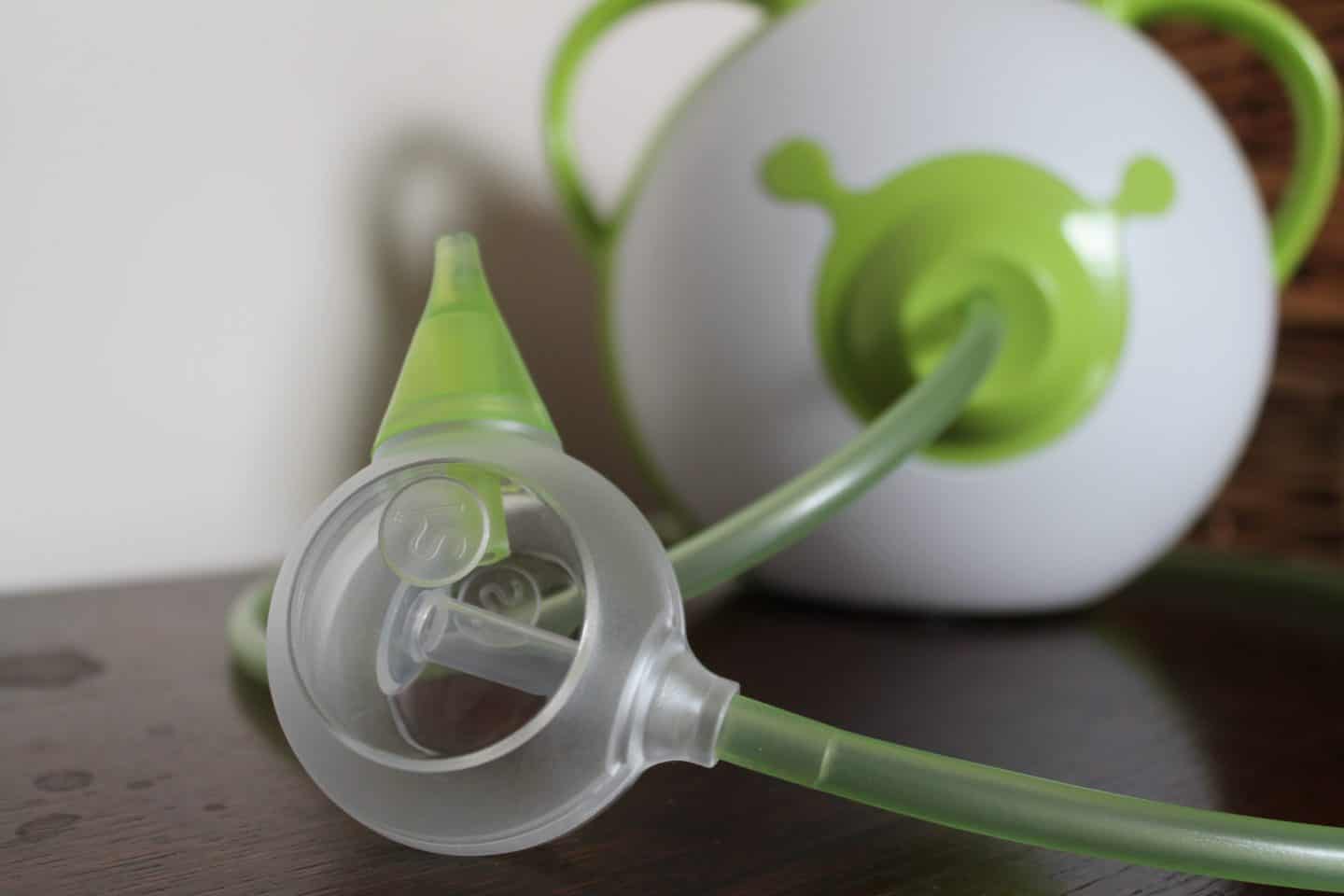 The bulb where the snot collects is easy to disassemble and remove from the hose and clean it warm soapy water and you get a spare nozzle too. The machine looks like a bear a little, with the handles as ears, basically it looks friendly! It was the winner of the Red Dot Design Award in 2014 and the German Design Award Special Mention this year.

At first they were both a bit wary as the machine makes a humming noise, but soon got used to it and realised it made them feel better after a minute of annoyance (and me pinning them down to sit still!) The noise of the machine means you probably couldn’t use it when your child is asleep unless they’re a really heavy sleeper, but I rarely used the manual one overnight anyway so for us this isn’t an issue. I am almost looking forward to the next round of colds…

It’s worth noting that as you can increase the power of the suck that both Sam and I successfully  aspirated our own noses too, not what it is designed for but it worked! I also can’t believe I just shared that on the internet!

Available on Amazon in a range of colours, these retail for £115 which at first thought seems a bit steep, but if I think about how many times I had to use the bulb type ones when this would have sucked everything out in one go, and if you have more than one child (or adult willing to use it!) then it actually doesn’t seem that so expensive, especially if one or more of your kids is at nursery and will be picking up every bug and cold going!

We were sent a Nosiboo for the purpose of this review, all words and gushing opinions are my own, but its ace, and we are using way less tissue too so it’s saving the environment!