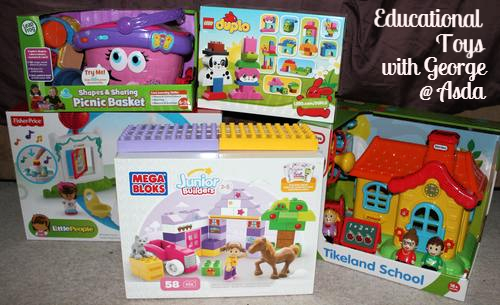 Toys can be educational without being boring and dull, and now Athena has reached an age where she understands more about the world and what goes on in it she’s finding a lot more enjoyment in toys that let her use her imagination a bit more. We were asked recently if we would like to choose from the selection of educational toys at George at ASDA, though I admit that I did the choosing!

I was careful not to introduce all the toys at once in case of a sensory/brain overload, so let Athena play with a new toy every couple of days. This way she played with each set thoroughly and explored lots of different angles!

I chose two ‘building’ type toys, one Creative Animals set from Duplo and one Junior Builder set Mega Bloks, both early versions of proper Lego. The Duplo set has lots of different pieces that can be made into random shapes or proper animals, depending on how you feel at the time! For the first fifteen minutes Athena actually preferred to empty the bits out of the box, fling them around and then put them all back in a few times! Once I had showed her how the bricks went together she soon got the hand of it though! We did have a little play with the Mega Bloks set, but the pieces were smaller and a bit more fiddly so I think saying from age 2 is correct and we’ll leave it a few more months and try it again when Athena is closer to two! 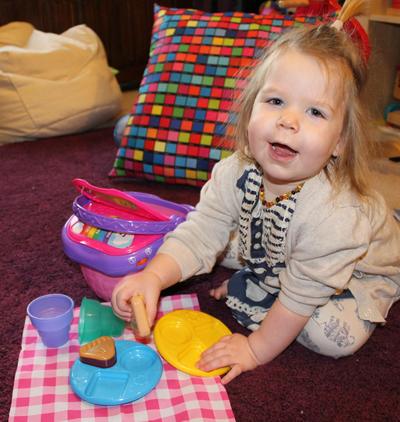 The shapes and sharing picnic basket from leapfrog is great fun, although it does play songs and talk! It asks questions about things in the set, which Athena pays no attention to just yet but I’m sure she will within a couple of months. She loves the noises that are triggered every time you open either of the lids, and also loves pretending to eat the food and drink from the cups! She also loves to make me ‘eat’ the bits too, so definitely lives up to the ‘sharing’ name! The only thing I don’t like is that it’s a very pink picnic basket! 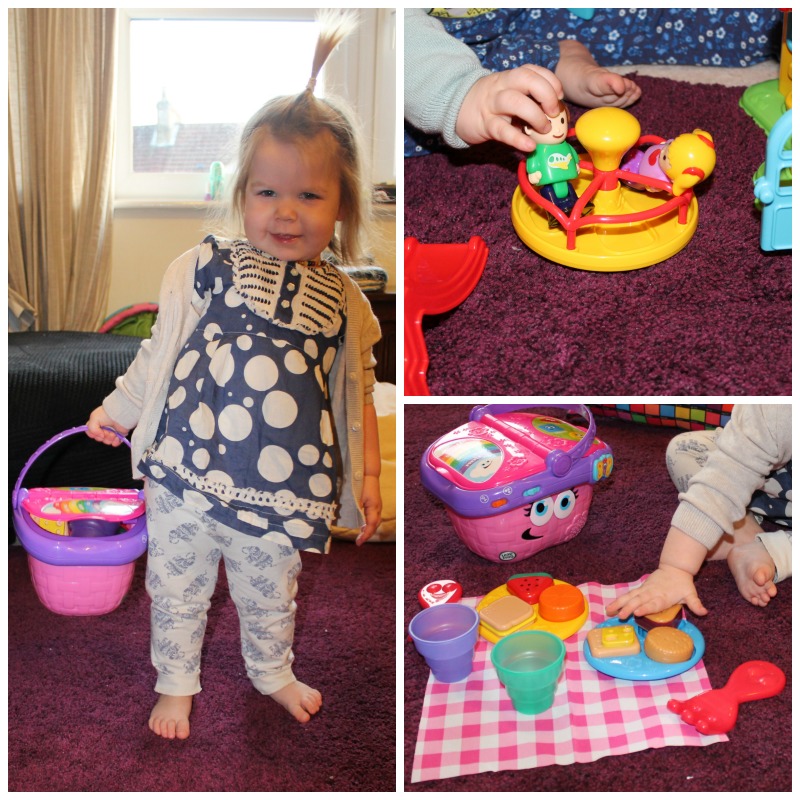 The Little Tikes My first School is another favourite, and only has a school bell button, much more pleasing to parents ears! The school house has an open back, and an opening door so you can play both in and outside. The moment I unpacked this from the box Athena opened the door and peered through, which was really sweet and very amusing! There are two students, a teacher and various play equipment for them too. The school house has numbers printed on it and there are lots of bright primary colours to aid learning too. 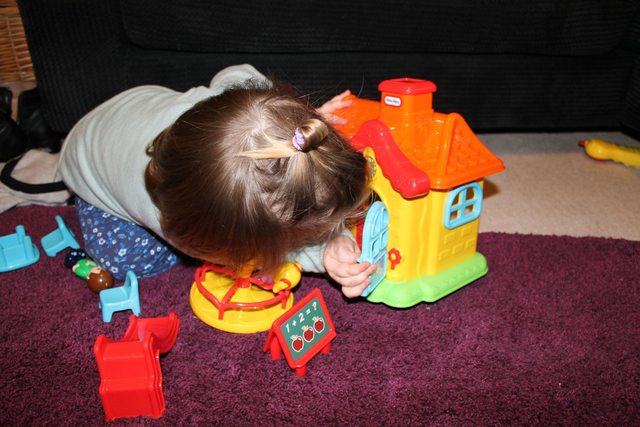 Finally we had a quick play with the Little People Birthday Party set from Fisher Price, which went down well especially spinning the Piñata! It’s another slightly  noisy set, and admit I have been a mean mummy and put it away until Athena’s birthday as it seems more apt! Or for when she really needs a distraction when the new baby arrives!

I think letting Athena take the lead when playing with these sorts of sets is really important, however tempting it is to make the people walk through doors and sit on chairs properly, for example! Athena loves taking the lead though, and giving me pieces to move about, or taking them off me and putting them where she thinks they should go! She’s having fun, learning more about the world at her own pace and entertaining me all at the same time!

What kinds of toys does (or did!) your toddler love to play with?

George at Asda very kindly supplied us with the toys to review for this post, as always all opinions and words are my own.

4 thoughts on “Fun with educational toys from George at Asda”