As I’m still up at daft O’clock (2.37 at the time of writing) waiting for a whole load of photos to transfer into my archive folders on my external hard drive I thought I’d write up a post to link to Hannah’s ‘This is the week that was: Captured’ linky(once she’s uploaded it at a more acceptable time of day, of course!)

I genuinely can’t really remember much of this week, but I know that on Monday I met my friend from works gorgeous little twin girls, who were 10 days old and miniscule! That evening I think the only exciting thing that happened was a drive to pick up the bundle of wooden toys I nabbed on ebay for a bargain! On Tuesday I went on a charity shop trawl with my friend Anna and her baby and bought more wooden toys (i’m addicted, who cares if the baby likes them!) and an amazing hand cross stitched sample for Athena’s nursery, I just need a new frame for it. No pancakes for me as Athena was up till 10pm for no readily apparent reason other than she didn’t seem tired! I did however decide to give up baths and buying things brand new for lent. I enjoy baths, long ones with bubbles and my kindle so it it seemed like it would be an actual sacrifice (Which is the whole point of it) and the new found frugalness from my charity shop bargain hunting made me want to see how long I could go on a ‘no new things’ mission (food and vital baby essentials allowed, clearly) so wish me luck! Oh, and I will be showering instead, I had my 5th shower EVER in our en suite today since we moved in

The next day, Wednesday, I think was a pretty lazy day with lots of new toys to play with. It was however the day Athena had her first ‘cruise’ from one side of her hungry caterpillar box to the other. I think she found herself a bit shocked at being there as she couldn’t get out again and wailed a bit. But I was still a proud mama, of course! Skye came over for dinner in the evening, which was lovely! I get lonely a lot when Sam is at work so it’s so nice to have company! Thursday saw us off for another little stroll with Anna to the beach, then a Jo Jangles thing at the children’s centre (the doll is creepy by the way!)

Friday was a nice twilight stroll along the beach and park in Littlehampton (post coming tomorrow) and Saturday was another trip to the park with my friend Amy (Athena’s godmother) and her little girl. I’m also contemplating a hair cut, it seems so much longer since I dyed it back to my natural colour in February, there’s just so much of it! Today will be a REALLY lazy day, seeing as it’s just gone 3am and I’m sure Athena will be awake around 6am if not earlier! My photos have finished transferring too, so i’m off to bed with a hot cross bun!

What did YOU do this week? Did you give anything up for lent? 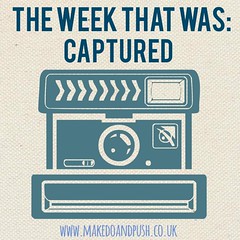 8 thoughts on “Giving up baths and other things”