A couple of days before my birthday Sam and I went out for a meal, as his boss had given him £100 to spend as a Christmas bonus (and because he had to work the event where the rest of his events team were rewarded!) so we decided to pick a restaurant that was new to both of us, instead of choosing an old favourite. After a bit of asking around in person and on twitter The Coal Shed came up a few times, so that was where we (Well, I!) picked. Its about a 5 minute walk from home, and we had a quick drink in the Fiddlers Elbow a few doors down before our eating.

The decor is really simple, but not bland. I generally don’t like overly decorated places, or strange pictures/art installations that distract me from what I’m eating/talking about. There was an open fire, and we were sat next to a radiator so even though it was freezing and absolutely tipping it down outside we stayed cosy. In fact, they draw a circular curtain round the door so that there isn’t a draught when people come and go, which is a nice touch. OH, and just so you know, the toilets were immaculately clean, with hand soap and hand cream. I’ve never had a bad experience in a place with good toilets…

The menu is mostly meat, with a fish of the day option, and a few other dishes for non fish/steak eaters I guess. You can view their menu here. 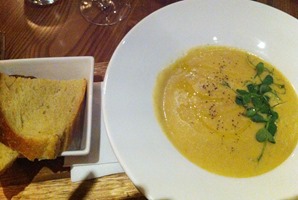 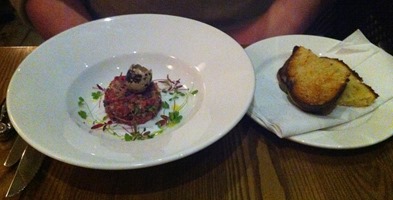 I chose for starters Roast parsnip soup with honey and Bramley apple and Sam opted for the Steak tartar with quails egg, which were both offered on the specials board. I think Sam chose his option because it had raw meat AND egg in it (both no-no’s for preggos!) so he’d get to eat it all!

The soup came with fresh crusty bread and was really thick, with both the honey and the apple flavours obvious. Sam’s starters came with some toasted bread and was really lovingly presented, with the pre cracked quails egg. Its pretty funny watching Sam with his huge hands delicately pluck this egg up and pour it, it was about the size of his thumb nail! His verdict was: “yummy”. 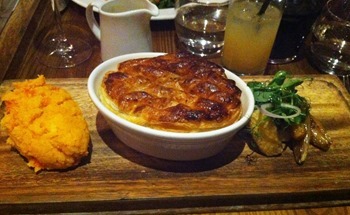 For our main courses I plumped for the ham hock and cider pie, which came with root veg mash, and caramelised apples and shallots. I also wanted the Beef dripping chips and the honey glazed carrots as side orders. 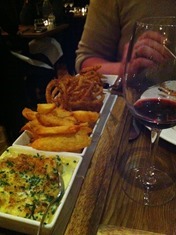 Sam went for a 250g rib eye and half a lobster (which is something he’d been wanting to try for as long as I can remember, but I’m never willing to go to fish restaurants with him!) which came with a roasted plum tomato and some garnish (and a finger bowl and lobster cracking tool!) and he ordered potato gratin and onion rings as sides.

When we ordered our long suffering waiter (who had very kindly brought Sam two types of wine to try before he ordered his carafe, and answered all sorts of questions for us!) asked if we definitely wanted 4 sides as the portions are quite big, which I thought was nice as it shows they’re in it for your enjoyment and not just the hard sell! Anyway I reassured him that I was happily eating for two and that Sam could eat a hippo at any time of day and to bring it all please! 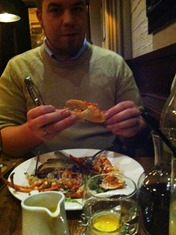 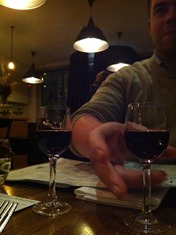 Now I love pie, and a pie would probably be my ‘come dine with me’ main course if I were ever to go on the show (which I wouldn’t as we don’t have a dining table and eat off the coffee table!) and although I’d never choose a pie in a restaurant or pub where it is likely to come in frozen, I’ll 99% opt for one if it is freshly cooked in a restaurant. Plus I love cider, so this one sounded ideal. It came in a dish with a fluffy pastry lid, and was really densely packed, no watery fillings or half full dish here! I’m going to try and recreate it at home for sure! The mash was served piping hot and the apple/shallot accompaniment was well chosen to compliment the pie. The beef dripping chips were bloody amazing, as were the glazed carrots, which I used to mop up the last remnants of pie filling.

Obviously I had a chunk of Sam’s steak (35 day matured no less!) and although it was slightly rarer than I would normally eat it it was tender and succulent. I didn’t try the lobster, but had fun watching Sam crack bits of it open and scoop it out, then lavishly waves slosh his fingers in (and around) the finger bowl. I did try the potato gratin, which was tasty and the onion rings were really finely sliced before battering, and in my eyes the were the ‘curly fry’ equivalent of onion rings. 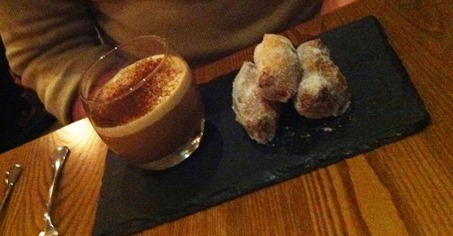 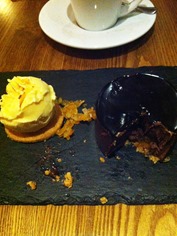 Now onto puddings (my favourite course) after the couple on the table next to us ordered the Doughnuts with home made chilled mocha mousse (they look and taste like churros, really fluffy and light) Sam decided that’s what he was going to go for, and I never turn down a Chocolate Torte (this one came with blood orange marmalade inside, on a biscuity base).Both came on slates, which is a bit of a bug bear of mine as they can be hard to eat off, and also hard for the waiter to pick up gracefully off the table afterwards, but it’s a small gripe!

Overall, we had an amazing night, and if it weren’t for the obvious reviewer (I presume) sat at the table behind us and taking photos with his flashy DLSR (which he dropped at one point, whoops) I might have at least used flash to make my iPhone snaps a bit better, but to be honest the point of the dinner was to have a nice evening with my husband, not solely to review, obviously!

We’ll definitely go back, and I look forward to seeing what the spring/summer menu has on it too! Apparently there is a room that you can hire for larger parties, and have your own music played etc., which would be perfect for a group special occasion!

2 thoughts on “In which I eat at The Coal Shed”