We had our first proper family games night at the weekend, and it was so much fun! Arlo at three and a half isn’t quoite old enough for games with too many rules or games where you have to wait a long time between turns – he simply gets too impatient! Little Tikes sent us a family games night box with two perfect games in, both are fast paced, fun and really interactive! We stuck some music on, played games for an hour and a half whilst scoffing popcorn, then ordered pizza and all watched a film together afterwards and it was lovely, the kids were up late but as it was a weekend it didn’t matter!

Crazy Blender is a super fun game, that teaches kids about matching, memory and patience as they wait their turn, as well as a lot of laughter! You need to create a smoothie, by putting the matching fruit cards into the crazy blender, the only thing is they might fly out again at any moment! 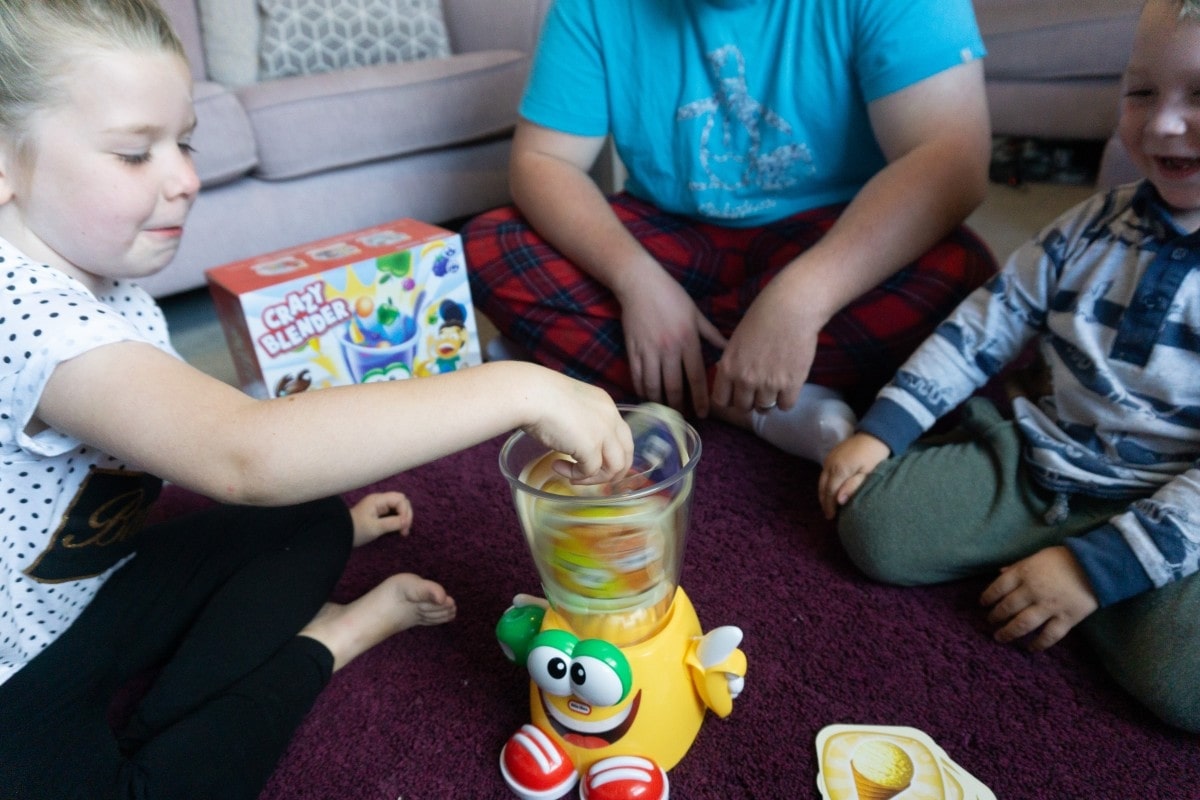 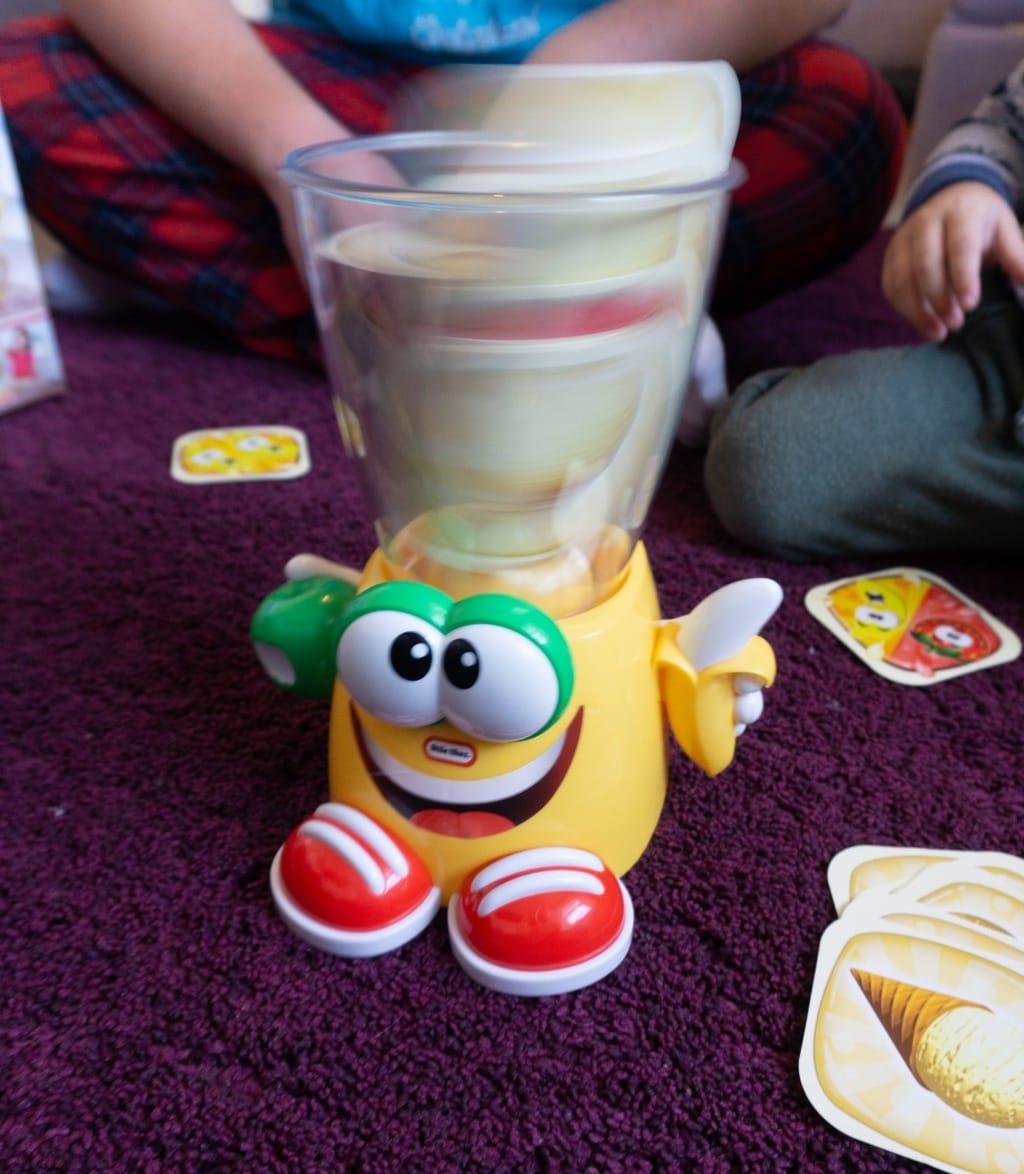 It’s easy to set up, though does require 3 AA batteries which were not included. You start and stop the blender by pressing one of his shoes and away you go! What I loved was that the first person is chosen as whoever ate fruit last! A good incentive if the kids know we’re having another games night! The person to get rid of all their cards into the blender first is the winner. This is such a quick game that we played several goes, with Arlo winning overall, though I think he might’ve done a bit of sneaky cheating! 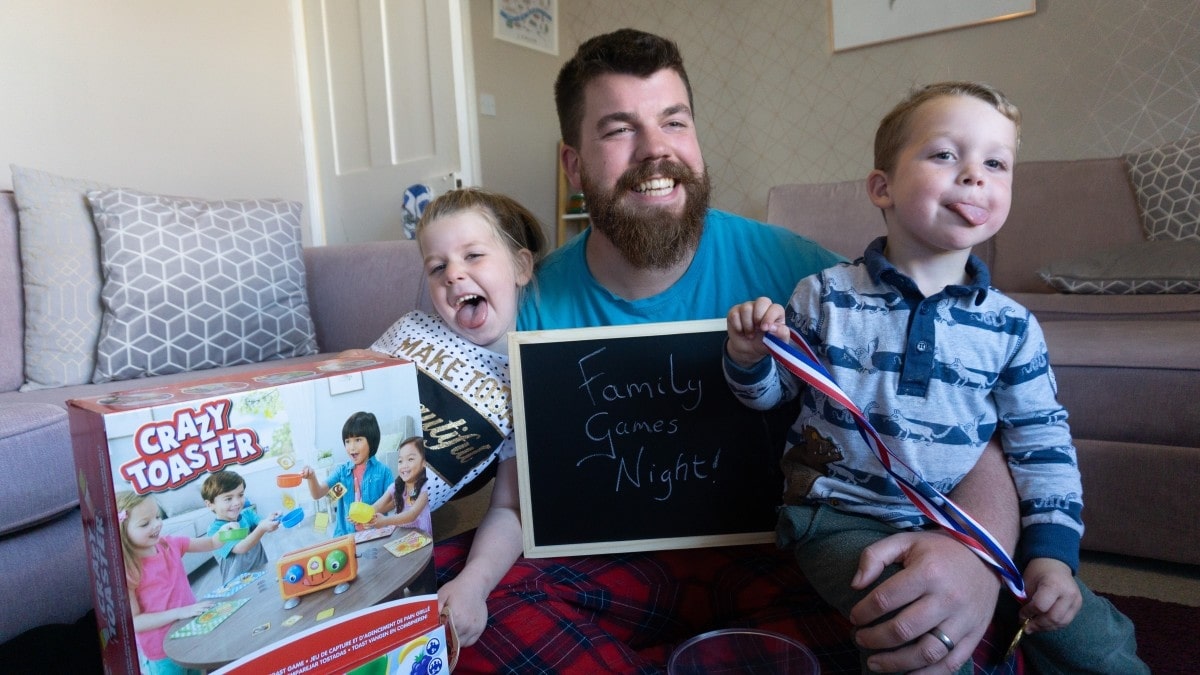 Next up is Crazy Toaster, which is a little more involved that the first game but still very fun! Once you’ve added the arms and legs to the toaster, and the cups and eyes (the latter only needs to be done once they can stay on in the box) you’re good to go as no batteries required for this one! All your slices of toast get mixed up and popped in the toaster, ready to pop up at random when you set him off (by pushing down the nose) 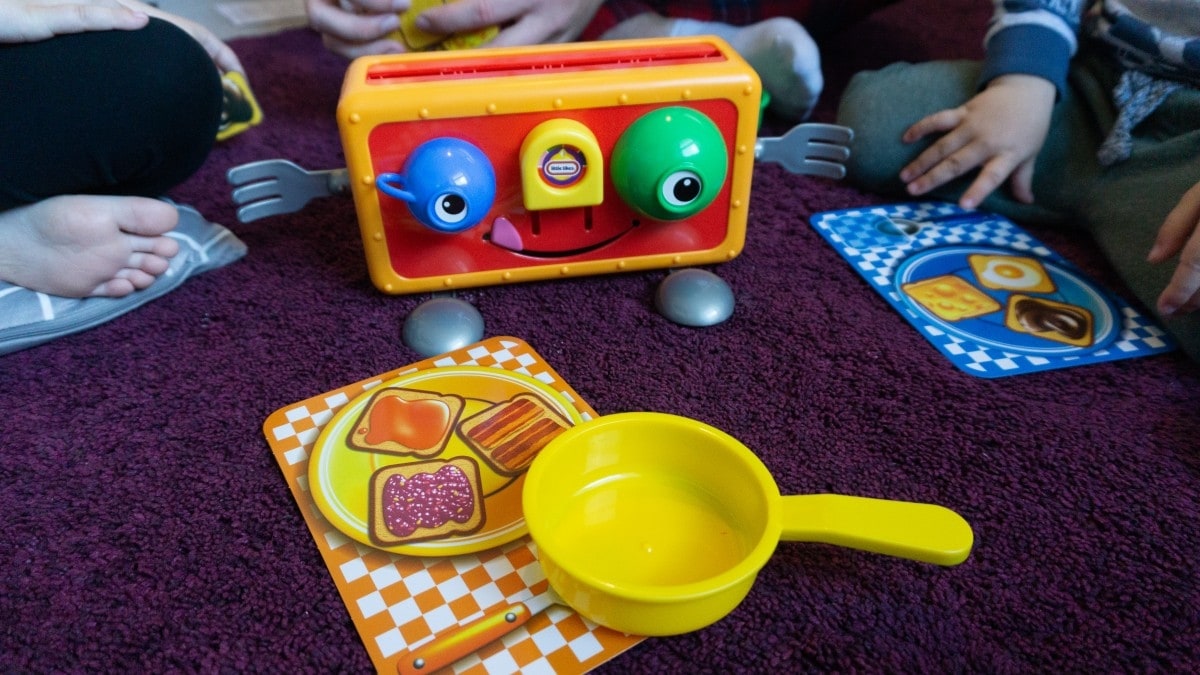 The aim of the game is to collect the toast shown on the card that matches your frying pan first! It’s very tricky though as you have to catch them as the fly! It;s great for hand eye coordination though! 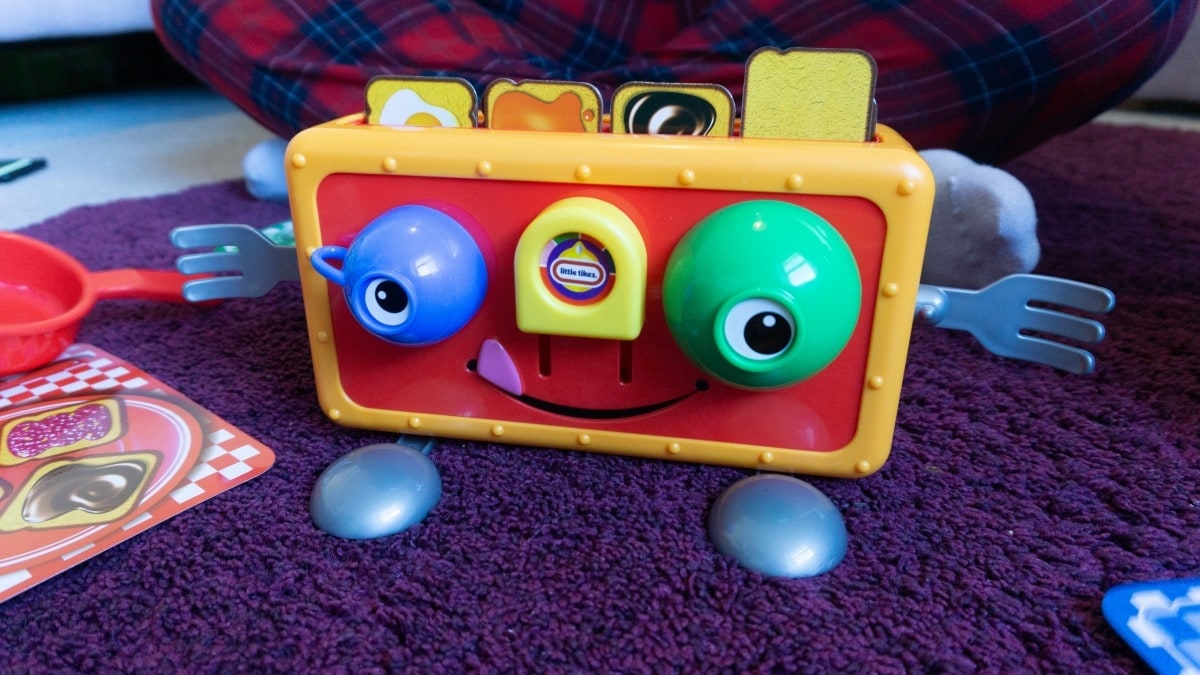 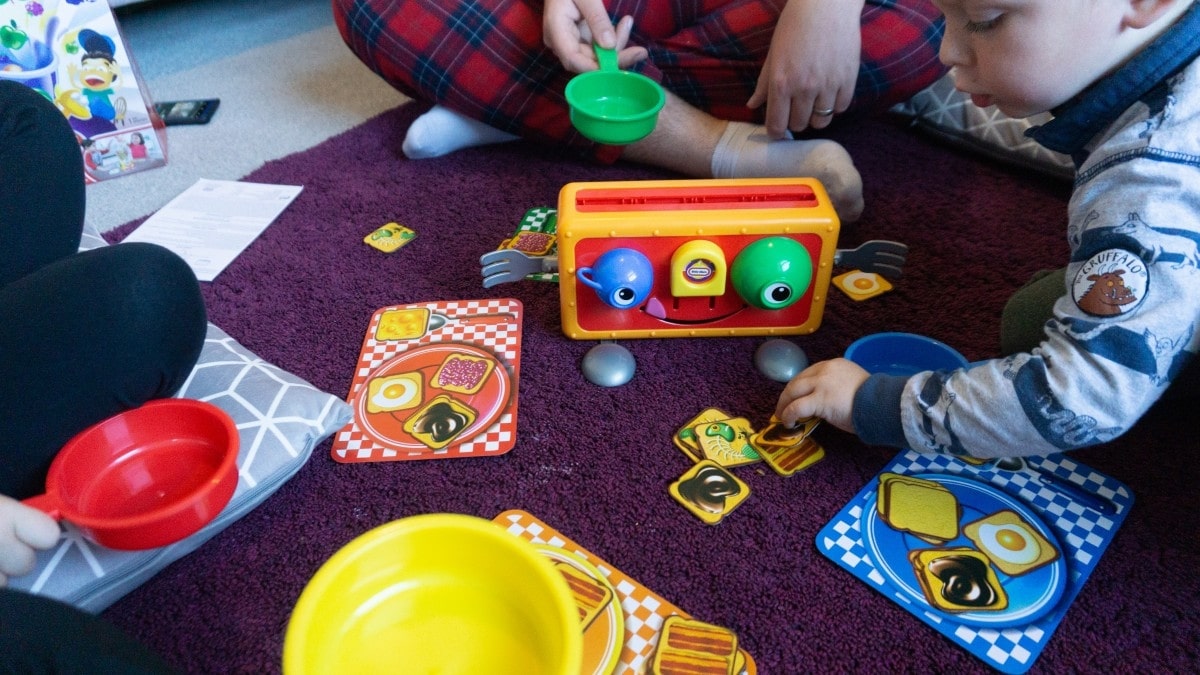 Athena was the winner of this one, she caught on really fast, once she’d worked out that the smelly fish were ones you didn’t want to catch! This game lasts a lot longer, as any pieces that aren’t caught go back into the toaster, and the game ends when the toaster is empty. 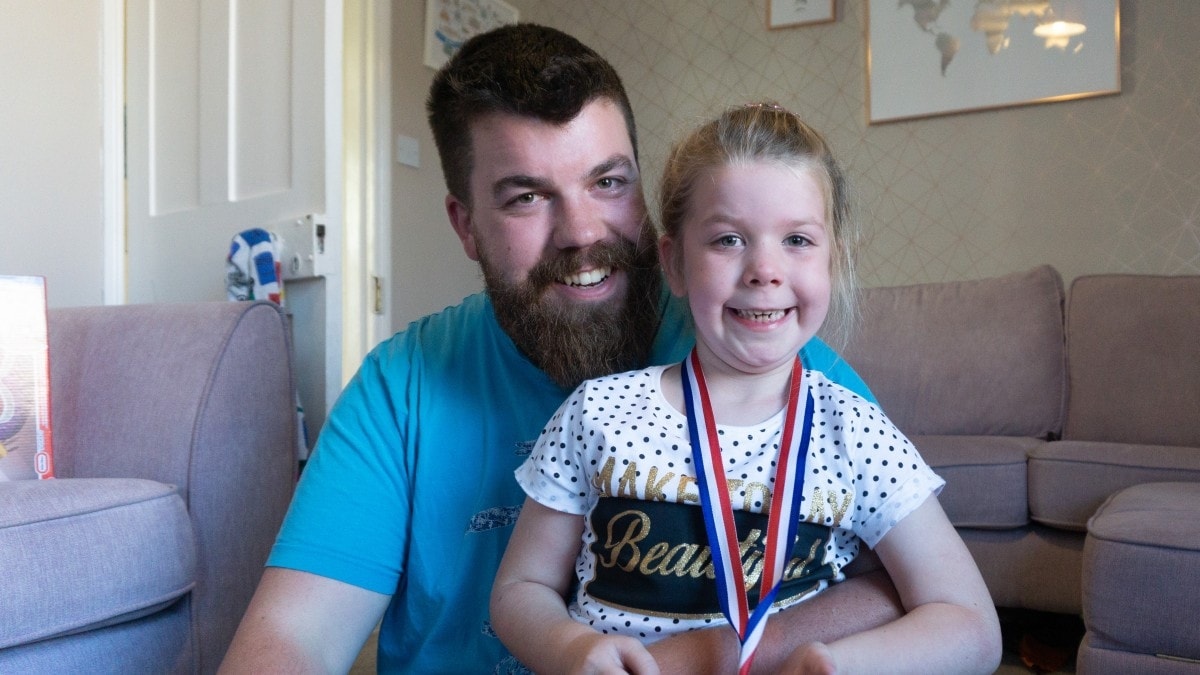 We made a little video so you can see exactly what they’re like to play! We had so much fun, and these interactive games really did hold the kids attention way longer than I thought they would! The kids definitely won this round, but they might not be so lucky next time!

You can buy the Little Tikes Crazy Toaster & Crazy Blender on Amazon and at other good toy retailers. I think they’d make wonderful Christmas gifts!