A little while ago I wrote about Leetchi – the easy way to collect and raise money. One of the ways you can collect money with Leetchi is for collecting money for charity, which is exactly what Lucy Watson is doing. I’m a lapsed Made in Chelsea watcher and have missed too many seasons to catch up now but Lucy was always one of my favourite characters, she didn’t beat about the bush and said exactly what she thought, which I loved!  She’s now fundraising for PETA, the animal rights charity, along with her little dog Digby. PETA​ was founded in 1980 and is internationally recognised as one of the leading and most influential animal charities in the world. They focus on campaigning against issues of animal cruelty that include topics such as factory farming, fur farming & animal testing. A few months back Lucy stripped down to her underwear to encourage people to stop using feather bedding, and also posed for  this image… 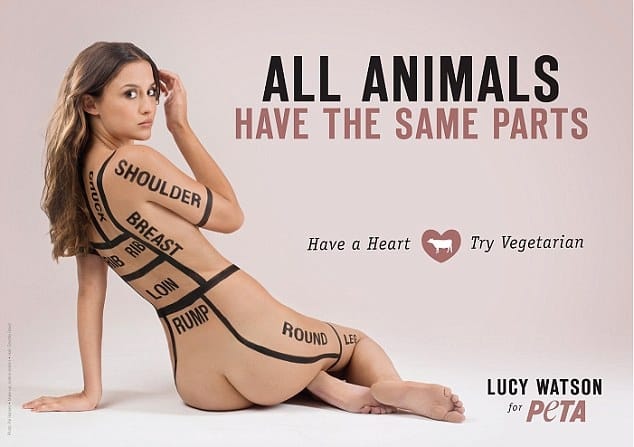 She’s a great spokesperson having been a vegetarian since she was six! In a couple of weeks she is heading to Australia to visit some animal shelters so she can see what some animals go through before being rescued, and to help and be hands on too. To find out more about the PETA campaign watch Lucy’s video below. 100% of the funds raised will go to PETA to support and its activities.

Everyone that shares Lucy’s Fundraising site using the hashtag #LWfundraiser will be in with a chance to win prizes from one of Lucy’s line of cosmetics, ​Basic Bitch​. On the 21st of March there will be 3 winners chosen at random from Twitter and Instagram.

Leetchi.com is an easy, fast and secure online fundraising site that allows anyone to create a ‘money pot’ in less than a minute and invite others to help finance creative projects, raise funds for charities and individuals in need, as well as buy group gifts (for birthdays, baby showers and co-workers leaving dos). Leetchi.com has some of the lowest fees, when comparing to other online money collection platforms. It is completely free to create a money pot and launch a campaign.

This is a collaborative post, all words and opinions are my own.