This week was sponsored by the words tired and stressful. My first full week of Maternity leave went like this:

Sunday seems like so long ago that I genuinely don’t remember what I did (which seems to be a running pattern, as I swear I wrote something similar last week!) but I think perhaps that was the day my friend and her kids came for a visit in the afternoon, though that may have been Saturday, who knows?

On Monday Athena and I headed to our first EVER playgroup. Yep, at very nearly 21 months we went and interacted with other kids and mums we didn’t know for the first time! I feel a bit bad about it but it never really appealed before. However I just desperately wanted to do SOMETHING to break the day up (yep 5 days since maternity leave started and the boredom set in!) and a friend I knew was going so we went along too. It was actually really good fun, and free too! There was a craft table, hundreds of toys, free tea and biscuits and singalong at the end. Athena was in her element and shot off to join in with the singing and dancing, so I’m sure we’ll go back again! I didn’t take and photos obviously as I don’t think people take kindly to strangers taking photos of their kids and plonking them on the net!

Tuesday was a Nursery say for Athena, and a getting things done day for me! I had a lovely call to confirm me being an Ambassador for Babymoov! I am so thrilled about it and there will be a blogpost coming soon! I then got a fair few blog posts written, packed baby’s hospital bag, and even managed a nap!

Wednesday was a lovely day as Sam had the day off work (his first of three in a row!) and we went swimming which was great, I actually felt semi weightless again for the first time since having this giant bump around! We went to the pool in Burgess Hill, that has a little piratey cove type pool for little ones, as well as a ‘rapids’ so it was lovely to splash about with Athena and get her more confident in the water! After that we headed for a lovely (and free!) lunch at the restaurant attached to Sams Hotel as he had done the manager a big favour earlier in the week. It took Athena an age to eat all her lunch as all her backed beans had to go in her mouth one by one, whereas she devoured her jelly and ice cream with two spoons in super quick time!

Sam walked Athena to nursery on Thursday morning (he has a lot more patience than me!) and we’d planned to take some old toys and bits and bobs to store at my mums garage and then a few more bits to a charity shop, then sort out a load of other things at home. However our plans were scuppered when I had a call from the hospital asking if I could come in that morning rather than for my scheduled appointment the next day due to sickness. I said yep and Sam came in with me (this was meant to just be to book my C-sec date) and thankfully he did because we were kept waiting for about two hours to meet with the consultant! However the date is now booked! The consultant detected a drop in heart rate of the baby though so I was then hooked up to the monitors for a bit, and it happened again. An hour and a half later they said it was probably all okay but to come back tomorrow for another session just to be sure. So after almost four hours at hospital by the time we got home we weren’t really up for doing all the stuff we had planned! I had a nap and when Sam went to get Athena she was just in a nappy and socks as her temperature had gone up just after tea, and they had had a scarlet fever case in the pre school upstairs! So we monitored her that night, and she woke up in the middle of the night with a slightly raised temperature but did go back to sleep after some cuddles, and of course I hardly got any sleep worrying about her and the baby bump! 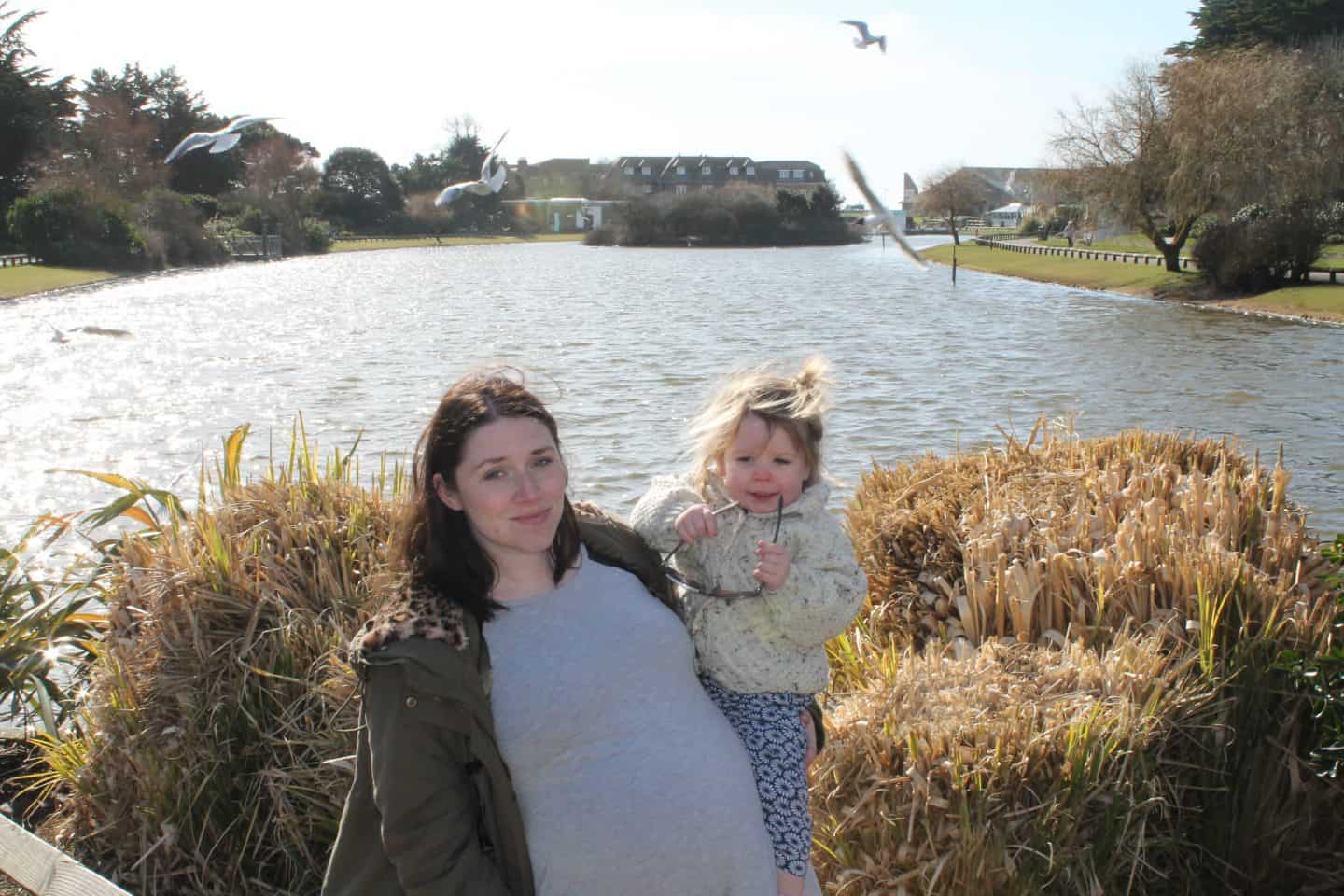 On Friday morning I walked to the hospital for more monitoring whilst Sam (who had been sick overnight!) waited for Athena to wake up. She was still not quite herself and fairly tearful but with a normal temperature at least! Thankfully the monitoring for baby was all good but I had traces of protein and white blood cells in my urine sample which were sent off for testing. When I got home we loaded up the car to take things to store at my mums garage then headed to a park and to see the ducks at the pond. Athena turned 21 months old and I turned 36 weeks pregnant! I look HUGE in this photo but I think it’s because my top is baggy rather than actually being a hippo! Athena fell asleep in the car on the way home, carried on napping in her cot when we got home and THEN even fell asleep with us in bed later that afternoon, blissful!

Saturday was a lazy day, Sam was back at work after his three days off but Athena went down for a second nap in the late afternoon so I had a little kip too. I am just so tired all the time I don’t think the iron pills I am taking are making much of a difference! Athena is still not quite herself, but she is at least eating and drinking so hopefully it’s just teething related, but I am enjoying the subdued cuddles anyway.

This week I posted a review of the Bambino Mio nappies, which passed the overnight test with ease, and a list of things I am looking forward to this year, along with a little run down of what I read/ate/watched etc in February. I also have a competition running to win some Tommee Tippee cups if you’ve got little ones!

Things I wanted to do this week but didn’t: BAKE!

I hope everyone else had a slightly less stressful week than me!