It’s not often that something arrives that we all enjoy playing with, but right from opening the box Sam seemed to love putting the Thomas Super Station together, working out which layouts he wanted to do first, clipping it all together and assembling Sodor before our very eyes! I then had to remind him that it was actually for Arlo and that we should probably let him play with it first! Needless to say when Arlo woke up bleary eyed before it was even starting to get light he was so excited to see the Thomas Super Station set up for him in the corner of the living room. Well, I say corner but it’s pretty big as you can see, so it sort of spills out of the corner! 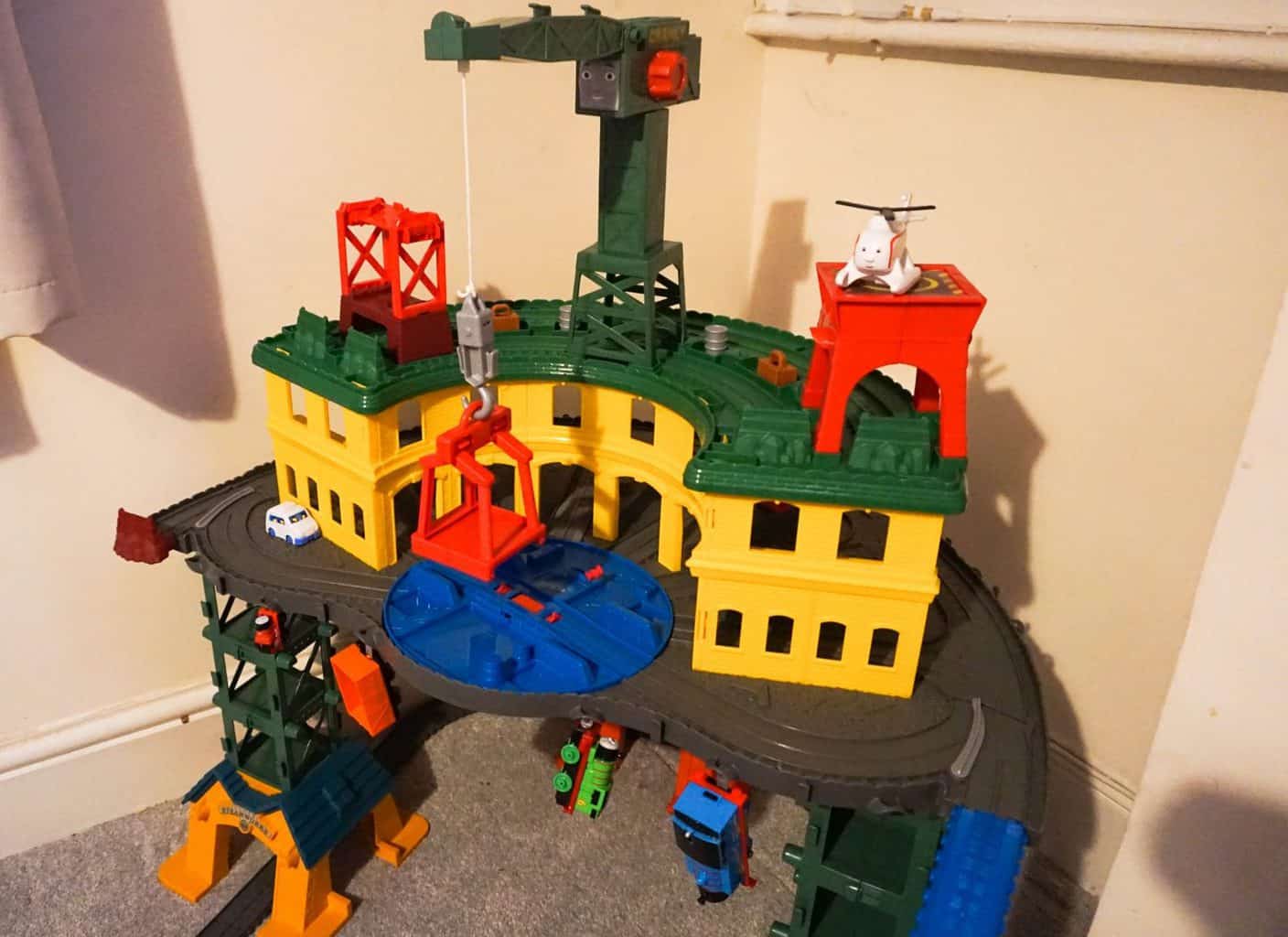 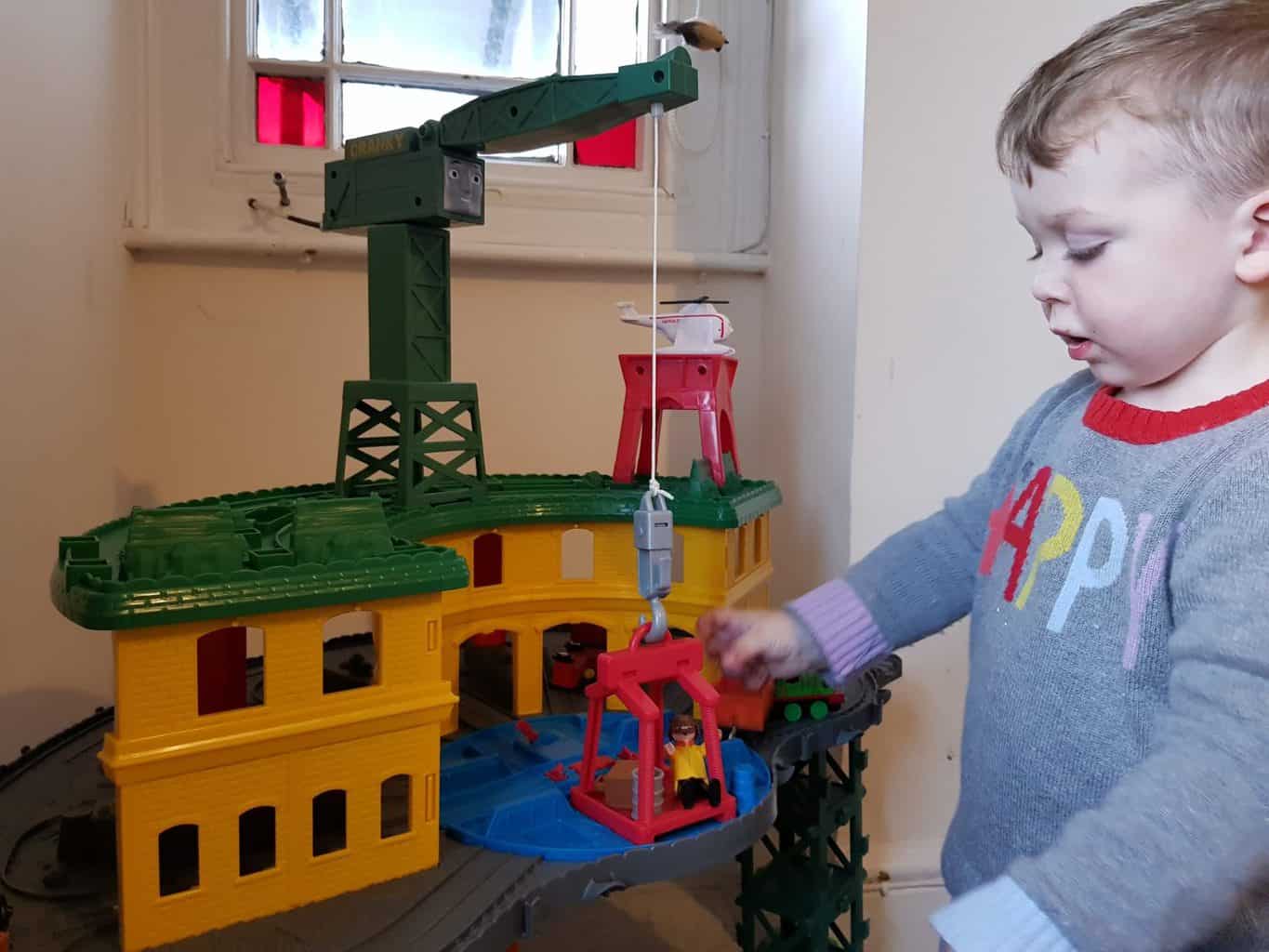 The Thomas Super Set is a playset combining lots of popular places from around the island of Sodor… You’ve got Tidmouth Sheds, Knapford Station, both the steam and diesel works and the Blue Mountain Quarry too! As well as those locations you get 10 metres of track to play with – and this is the bonus, it can be set up in so many different ways no kid could ever get bored! Then, as if that wasn’t good enough you can use ANY Thomas & Friends engines on the track! This is a real bonus for us as we mostly have Wood engines, you know, the ones that have magnets to form a whole train… but the set also comes with four trains, including a battery operated Thomas, an adventure train and carriage and a mini engine. And they ALL work on the track- how clever! The Thomas Super Set also comes with track adaptors which means you can extend the track to use with all types of Thomas & Friends tracks like the Trackmaster, minis and wooden tracks. We have a tonne of wooden train track and trains so to be able to use that with this play set means the track that could take over the whole living room and give even more hours of fun for Arlo (and the rest of us!) 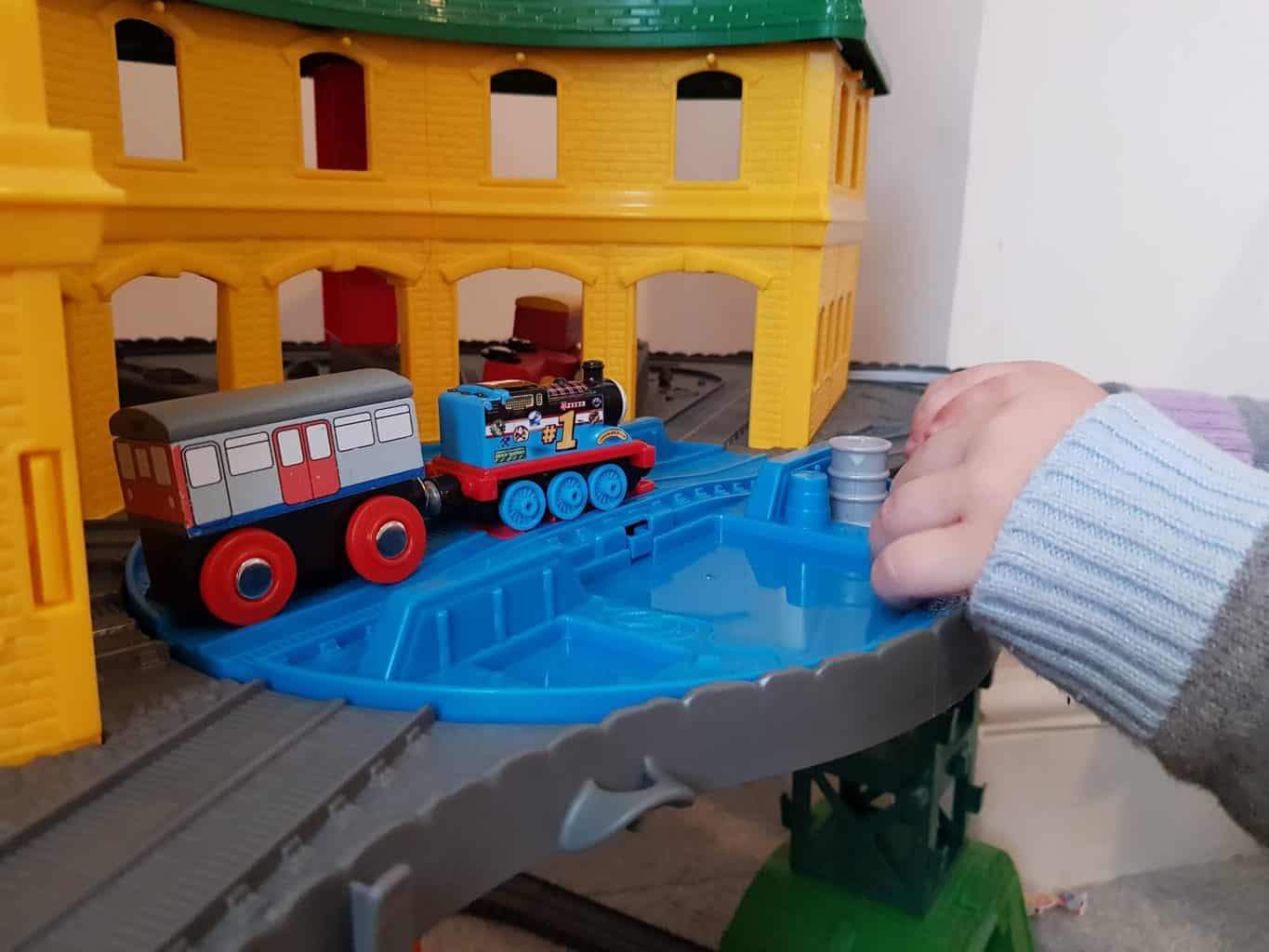 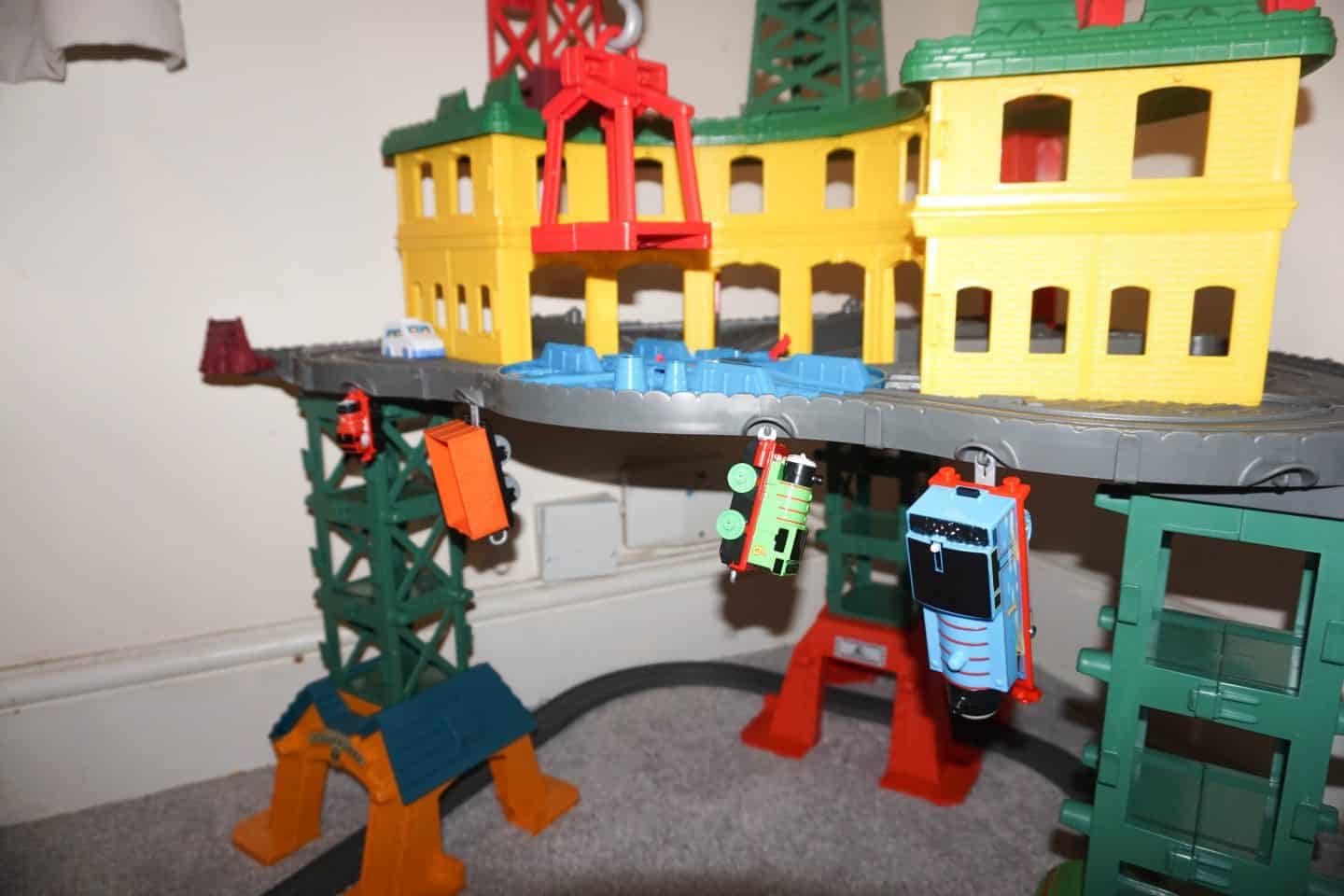 Another really clever feature of the Thomas Super Station is all the little hooks around the set meaning that you can hang up the engines by their connectors, as well as stack them in the uprights too – a very clever way to keep everything all together! As you can see from the photos there are three levels of play, the lowest is where you can build the different track layouts, the middle has a turn table, and lots of engine sheds with the track running around the outside, and this is where you can have the sloped race tracks attached for racing your engines! There is also a turntable (with a stop-lever for the mechanical Trackmaster trains) and a cargo area for using Cranky the Crane, and hauling goods (or engines) up to the top level! You can detach the middle level and use it on the floor in smaller spaces (or for smaller kids!) and have the track on floor level with no ramps. There really are so many possibilities in setting this up! Because all the track pulls apart easily you can tidy it away and reassemble as needed though the larger parts aren’t meant to come apart, so don’t expect to get it all back in the box! I think if you could unclip the crane you could actually slide it under the bed- though Arlo hasn’t let me try yet as he plays with it incessantly! It’s made putting Arlo’s christmas list together much easier- all he wants is ‘more trains for my train track’ so we’ve added some Trackmaster engines to his list! 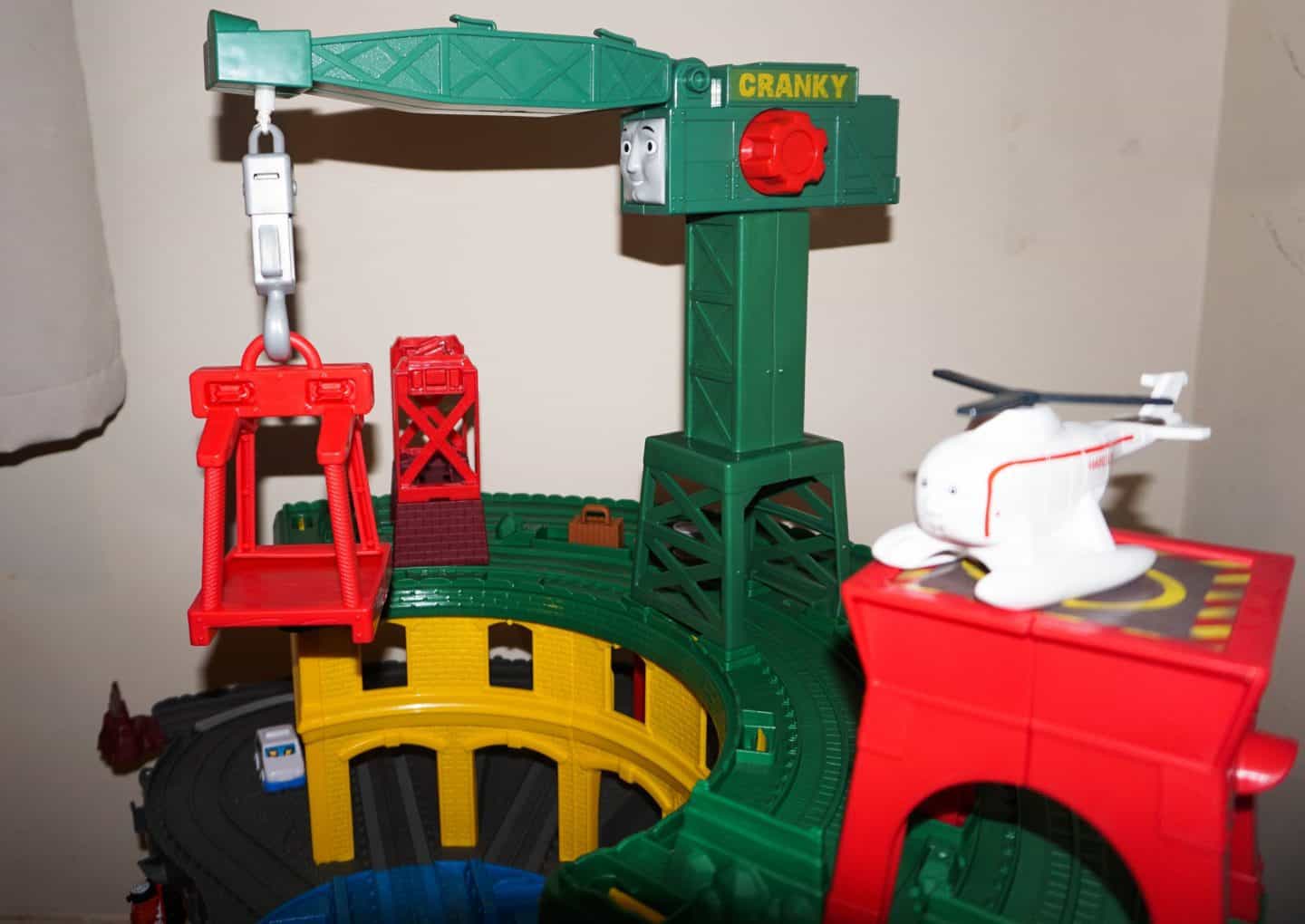 Arlo’s favourite ways to play at the moment involve moving the cargo around with cranky, and using the turnstile as well as races down the sloped track of course! There’s no denying it is a large play set, so it is worth taking that into considerations, but the fact that Arlo hasn’t left it’s radius since it arrived means he’s making less mess in other areas of the room so it’s not actually that bad! We just unclip the track and pop it underneath in the evenings when we want some semblance of a grown up room once the kids are in bed! For a toy that is entirely made of plastic it is surprisingly sturdy, and the detail on the parts is really intricate – bricks on the engine shed for example plus there are lots of stickers to add to the stations and diesel works etc.

Available from all major toy retailers Thomas Super Station retails at around £129 but it’s available on Amazon for £97… when its in stock! Definitely a toy that will stand the test of time, I really hope Arlo can play with this with his own kids (if he has them!) in the future… especially considering I’ll be adding new engines to his collection for birthdays and Christmases for the next few years! If you’re looking for something a btit smaller or for younger children check out our review of this Thomas & Pals Track. 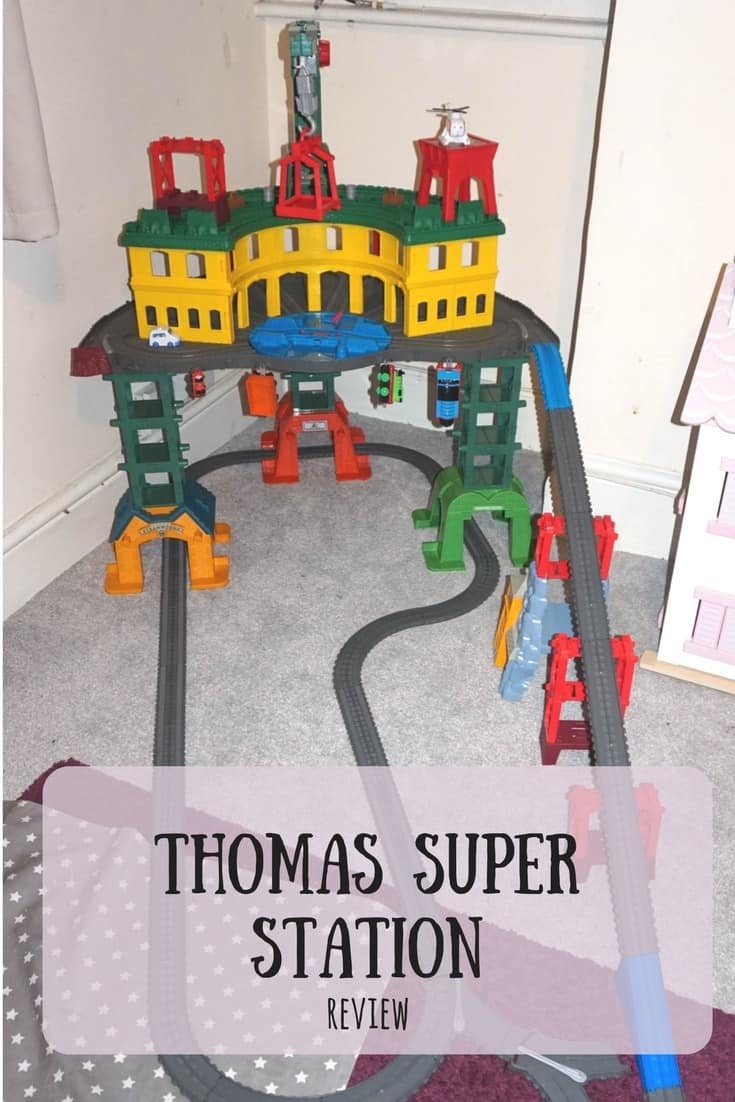