I wanted to do a post about my parenting ‘style’ for a few months now, or rather lack of. Once Athena arrived I didn’t read any books although I’d been given a few, I just followed my instinct. However you become aware of different types of parenting on websites/peoples blogs/forums etc it looks like I fall into the ‘AP’ category to a certain degree. I’d only really been aware of attachment parenting for a little while, and a couple of weeks ago Peaches Geldof highlighted it in the press due to a lively debate with old Katie Hopkins. Below are the principles, and I’ve explained my take on each of them. 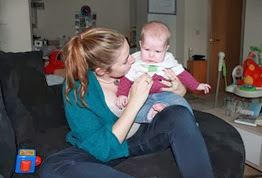 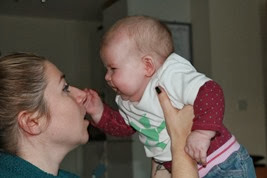 1. Birth preparation & Birth bonding – As for birth preparation I definitely wasn’t the textbook natural birth/ wannabe AP parent. In fact I had such anxiety and a mental block about it that I was allowed a scheduled C section. I think this made me a lot calmer about the whole process, however it was only agreed in week 36, so I really only had a few weeks to think about what might happen after the baby arrived, before that I was focussed on HOW the baby would arrive.  I think this worked in my favour as I had far less time to worry about the ‘what ifs’ and ‘how wills’ of having a new-born. We did have skin to skin after my C section in the recovery room, and obviously continued this in the hospital and once we came home the next day. Amazingly so far I’ve not experienced any post natal depression, not even the ‘day three blues’ and haven’t once cried or even felt like I wanted to, although I was in the ‘at risk’ category due to teenage depression and considerable pre-natal anxiety.

2. Breastfeeding – I knew I wanted to try it, and luckily for me it was an easy journey and we’re still at it now, with only a couple of bottles of formula in month 5 when I was away from her for more than normal and couldn’t express enough in time. I wouldn’t have beaten myself up over it if it didn’t work though, and hate the amount of furore there is over how people choose to feed their babies.

3. Babywearing- as soon as I could (due to C section) I wore Athena. Sam wore her before that. However I don’t wear her all the time, it’s not viable for us on long trips (she’s a chunky monkey and I am not strong) and she’s perfectly happy in the buggy.

4. Bedding close to baby – Now this one is an odd one for me, at 6 weeks we moved house and assembled the cot bed in her new room. We put her in the cotbed one night when she fell asleep at 6 weeks and is still there for the majority of the night now. Most people have raised their eyebrows at this happening so early, but at the time she was sleeping at least 6-8 hours overnight and when she woke up I’d bring her back to our bed and we’d fall asleep nursing and get a couple more hours rest. In the weeks before that she slept in bed with us or in a moses basket right next to me. She napped on me on the sofa in the first weeks, actually I still rarely put her in her cot for her morning nap and she spends it on me or next to me on the sofa. I distinctly remember thinking that we needed a bouncy chair because ‘I don’t want to be holding the baby all the time’ How wrong I was, it hardly got used and we put it away at 4 months.

5. Belief in the language value of your baby’s cry –  this is a big one for me. Babies don’t cry for no reason, and I take pride in the fact that 9 times out of 10 I know why she is crying, it’s easy to distinguish between hungry and windy, for example. I firmly dislike the idea of ‘cry it out’ and think that if something that small is crying they need to be comforted. How can something that small be crying to manipulate their parents, as some people believe? I also take cues from her facial expressions, I know when she’s about to fall asleep on the boob because her little eyes flicker from side to side then get wide, for example.

6. Beware of baby trainers – As I said before, I’ve not followed any of the routine based parenting books, although pre baby I honestly always envisaged a strict routine. Instead I let Athena set a routine, and she’s pretty good at it. Before the clocks went back and she had a growth spurt she was falling asleep in between 7 and 7.30pm. It’s a bit different now (longer afternoon nap and falls asleep between 8 and 9) but that’s fine, she can sleep wherever so I can take her out and about with me in the evenings and not worry about ruining the routine, and when she is awake she gets to see things and people that hopefully help her to develop. As for food we’re following a mostly baby led weaning route and I’ve just done what I thought is right with it, and so far so good!

7. Balance – A healthy balance between baby and your own life. I am happy with this (apart from my husbands working patterns but we can’t help that right now!) Having a baby hasn’t meant that I’ve had to stop doing anything that I want to do, I just take her with me, or Sam or my Mum looks after her. As she gets older I hope I’ll learn when to say ‘No’ to her, or to things I think I need to do. For example I am well aware that when she is not very much older I’ll probably need to stop taking her out so much in the evenings, once she has established more of a routine for herself for example, but for now everyone’s happy and I get to see people in the evenings and afternoons as my husband works these times.

There are obviously lots of theories behind AP, but I’ve not read many, and haven’t decided to choose to follow this path even, I’ve just fallen into many of the principles by accident. I’m hoping that as Athena grows she will remain close to me but I would never force something that she wasn’t happy with. So perhaps my parenting style is just that: ‘MY STYLE’.

What’s your ‘parenting style’? how does it differ to what you envisaged pre baby?

4 thoughts on “Thoughts: My Parenting Style”