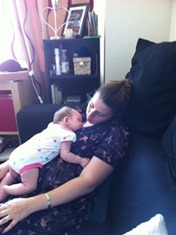 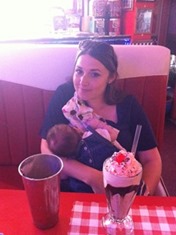 One of the main challenges for me at first after Athena arrived was coming to realise that my life runs on baby time rather than regular punctual Lauren time, although from week three onwards that got a lot easier as I learnt to know how long a feed takes on average and to get everything I need ready to go at least half an hour before I need it, including me. If you aim to leave the house dressed and with a bit of makeup on, if the baby is asleep/occupied then do get ready before you check facebook/twitter on your phone/call your mum/tidy the house, or you’ll never get out. Same goes for eating, people say ‘sleep when baby sleeps’ NO, EAT!!

I admit that this will sound incredibly big-headed and for that I apologise, but I’ve not found being Athena’s mama half as hard as I thought I would. Although I think that maybe I just hadn’t thought very much about what came after she arrived as I was so incredibly panicked about how she would arrive (I had an elective C-Section after a lot of persuading of various consultants) so I really had no preconceived ideas about what challenges we might face once we’d actually got her home. But no, she slept (and still does) for at least 5-6 hours overnight from day 3, in the first few weeks she only cried when she was hungry and was generally chilled out. A few weeks later and she is either chilled out to the max and sits gawping at the ceiling, or flailing her arms and legs about in all directions with a smile on her chubby face. If she does cry it’s normally hunger or wind. However, the here and now may be a field of roses, the future could be completely different.

I’ve started to think about things that I really shouldn’t. Sam wondered out loud the other day how old Athena would be before we let her have a mobile. My conclusion was that by time she’s old enough we’ll be using holographic projections instead of phones, and his was that he would need to GPS track any male she ever comes into contact with, as well as her,and buy a baseball bat. On a more serious note though, I worry about if she ever has an accident and ends up needing treatment, what will the doctors think of me? What if she bumps her head more than a few times (likely if she’s tall like her father and has no sense of spacial awareness!) and someone thinks I’m not looking after her properly?

Something that I’m not inclined to share with many people, and that those who know me personally wouldn’t expect is that I do not like to think about the future. The reason this surprises people that know me is that I am a meticulous planner of day to day things and set activities (like days out, holidays, moving house etc) but suggest to me to plan any further ahead than a few months and I’ll change the subject rapidly. I’ve never really planned anything, including my career (hence being with the same company for almost 12 years (admittedly I’m the manager now but still… it all kind of happened by accident and if you had asked me at 21 if I wanted to be a hotel manager I would’ve said probably not) There was never a 5 or even 3 year plan here, too much room to feel like a failure when things don’t work out.

The only vague plan, and I mean vague as in I’ve voiced it to about 3 people, is that we might move to Norfolk before Athena starts school. MIGHT. But I have come to realise now that I have a small person depending on me (Well, Sam and I) that planning for the future, her future, should be top of my to do list, or at least at the forefront of my brain. That scares me a fair amount. sometimes a thought of sending her off to school scares me, or I’ll see a parent chasing her toddler round the kitchen department at Ikea and semi-envisage myself doing the same thing and cringing. Then I put the thought to the back of my mind and study the range of kitchen chairs in depth to take my mind off it. Basically I cannot see myself as a mother to an actual child, who walks and talks, although I already am LOVING being a mama to a gorgeous baby who will soon be a child…

Is this normal? Did every other new mama out there have these panicky thoughts?

8 thoughts on “Thoughts on motherhood & the future”