I’m going to try and write about my wedding in stages, as a bit of a memoir for me but also to share it with all my readers, as people were so supportive during the run up to it, here and on twitter!

The week before the wedding was hectic to say the least, I finished work on the Tuesday, as did Sam, which gave us three full days before the big day to get things done, although for the whole week I had devised a to do list to try and spread the load over each day depending on how much time I had that day. It worked well mostly but often tiredness overcame me and things got moved to the next day! 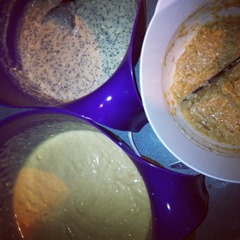 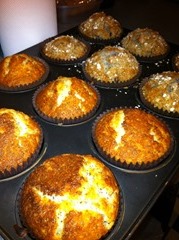 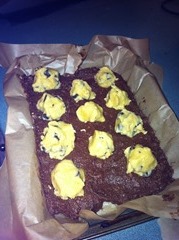 On Wednesday we went out for lunch to the American diner, and then searched for wedding presents for each other, but decided that as we couldn’t find anything we liked enough we just wouldn’t bother! plus it saved us money. I made two ginger loaf cackes and some fererro rocher brownies. On Wednesday night we finally decided what our first dance song would be, with Sam choosing the song and me choosing the artist (will be revealed in a future post!) So I put that on a CD with the music that I would walk into the church to, and that would be playing as we would leave as a married couple, then we also stuck 20 blank CDs into self addressed/stamped CD wallets for guests to take and put their pictures on to post back to us. We started packing our suitcases for the honeymoon too, so we wouldn’t need to do it after the wedding in a rush! Just before bedtime someone from work kindly brought me the two large boxes of muffins and cupcakes I had been keeping in the industrial freezers there, so I set them defrosting over night! 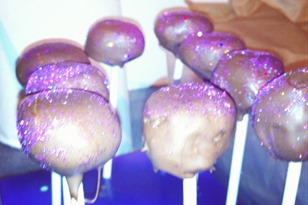 [sparkly cake pops, which are a shitter to make!]

Thursday was the day that my dad and stepmum were due, Sams mum and sister, and the best man and one of the ushers. Firstly I spent time in town looking for ties as the guys decided that they actually didn’t want to wear bow ties (fair enough!) and also the Kilts arrived! Literally each one of the 4 guys that tried them on, the first thing they did once the kilt was on was swish it around like a 4 year old in her first party frock. Hilarious. Anyway, after a bit of a drama where the kilt company hadn’t sent the tartan sash thing (that’s not the real name, obviously) for Sam (who was using it to differentiate between him and the other groomsmen (As if the extra 8 inches in height wouldn’t have done it!) so we called them and they arranged to courier it to us the next day. I spent most of my day icing and decorating various muffins (lemon and poppyseed, toffee, chocolate chunk, blueberry and white choc… the list was endless!) I also printed out all my orders of service (At work, naughty) and then finalised all the things that were cluttering up the living room that needed to be taken to the church. I packed my bag for the hotel I was staying at the night before and after the wedding, too. Thursday night was spent briefly with my dad and stepmum at the hotel they were staying at (the one I manage) and also meeting the best man etc that had arrived at the hotel, then they came back to ours for a chinese and a chat! 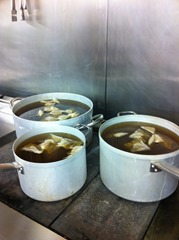 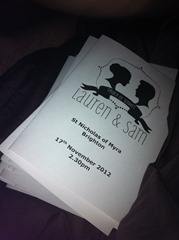 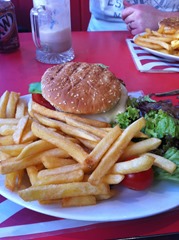 [Mulling cider at work in an industrial kitchen, folding order of services, LUNCH! (we needed the energy!(]

Friday was the most stressful day of them all, partly because we had our first sonogram scan first thing in the morning (but had to keep it a secret as only a few people plus the family knew we were pregnant!) and the rehearsal that evening, as well as all the other family members arriving at various points throughout the day, and having to get various things from various points in Brighton to the church! (we had things at home, at work, a friends fridge and so on…) 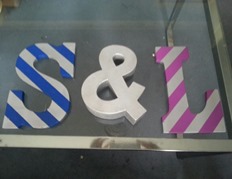 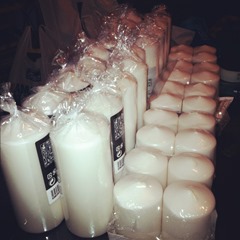 Once the dads had helped chauffer things to the church it was all hands on deck to get the stuff unpacked and in the right place (there was a church service before our wedding the next morning, so we couldn’t do much as it still needed to look like a church!) and the Juke box we hired for music arrived in the middle of all this! Then it was time to move on to the actual rehearsal, and our vicar Betsy was SO patient with me (yes, I want the bridesmaids to walk in in front of me, and YES parents will be sitting on different sides, even though its tradition…) and my mum “oh I thought you were JOKING when you said you were walking in to that song”, plus a bit of awkwardness as my mum and dad hadn’t seen each other for about 10 years! But Sams mum and the best mans wife Amy were stars and got my centre piece vases and bowls sorted during the rehearsal, with some help from the church youth club girls, who sweetly asked if they could sing a song to Sam and I before we left, and sung an acapella version of Bruno Mars “I think i’m gonna marry you” to us before we left, which actually made me cry (i blame the pregnancy and the fact that it was the song we danced to at our engagement party too!)

My one bridezilla moment was after the rehearsal when I was talking to the caterer and everyone was just stood looking at me, so I got annoyed and told everyone to bugger off and do something else, but it later turned out that Sam had been telling people to go to me for instructions!

After that there was literally nothing else I could do, or needed to do in fact, so Emily (one of my bridesmaids) and I headed off on a cab to the hotel we were staying at, after getting my wedding dress from my flatmates room where it had been all along, and ever getting Sam to carry it downstairs, telling him it was the bridesmaid dresses, even though they were hanging in the hall clear as day! He had been pestering me to know where it was for weeks. Once we got to the hotel I unpacked and hung up my dress on the end of the 4 poster bed so it would be the first thing I saw when I woke up. The hotel was a 15 minute walk from the city centre, so we headed in to meet my mum for dinner at an italian restaurant, (no wedding talk allowed!) and were back at the hotel and in bed by half 11! 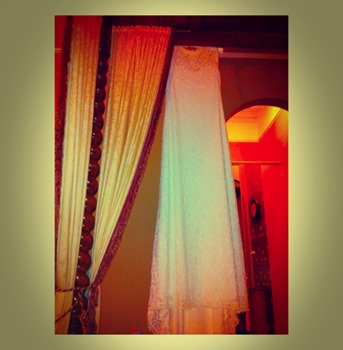 I’ll leave it there for now, and i’ll be back soon with the actual wedding day!!

5 thoughts on “Wedding, the week before!”