I have a lot of love for traditional toys, anything with a simple mechanism (or no mechanism at all) and for things made of wood. They look nicer, last longer and can hopefully be stored away for future generations. So many of the toys my kids are drawn to are bright, garish, noisy and easily broken. In fact when something gets broken now we call it being ‘arlo-d’ as he is mister destruction. Anything new that he is given he seems to think it is his given right to pull it apart! 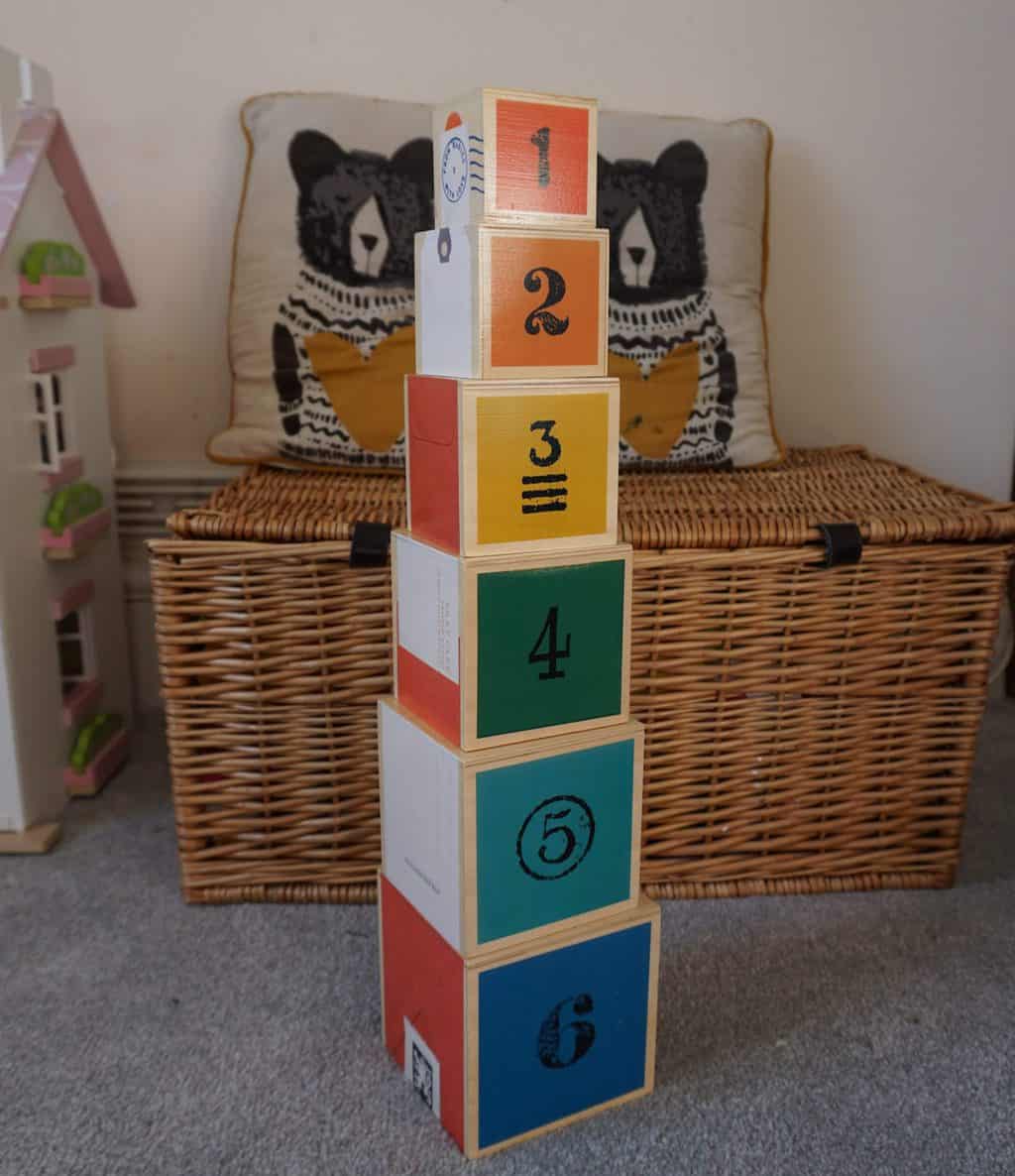 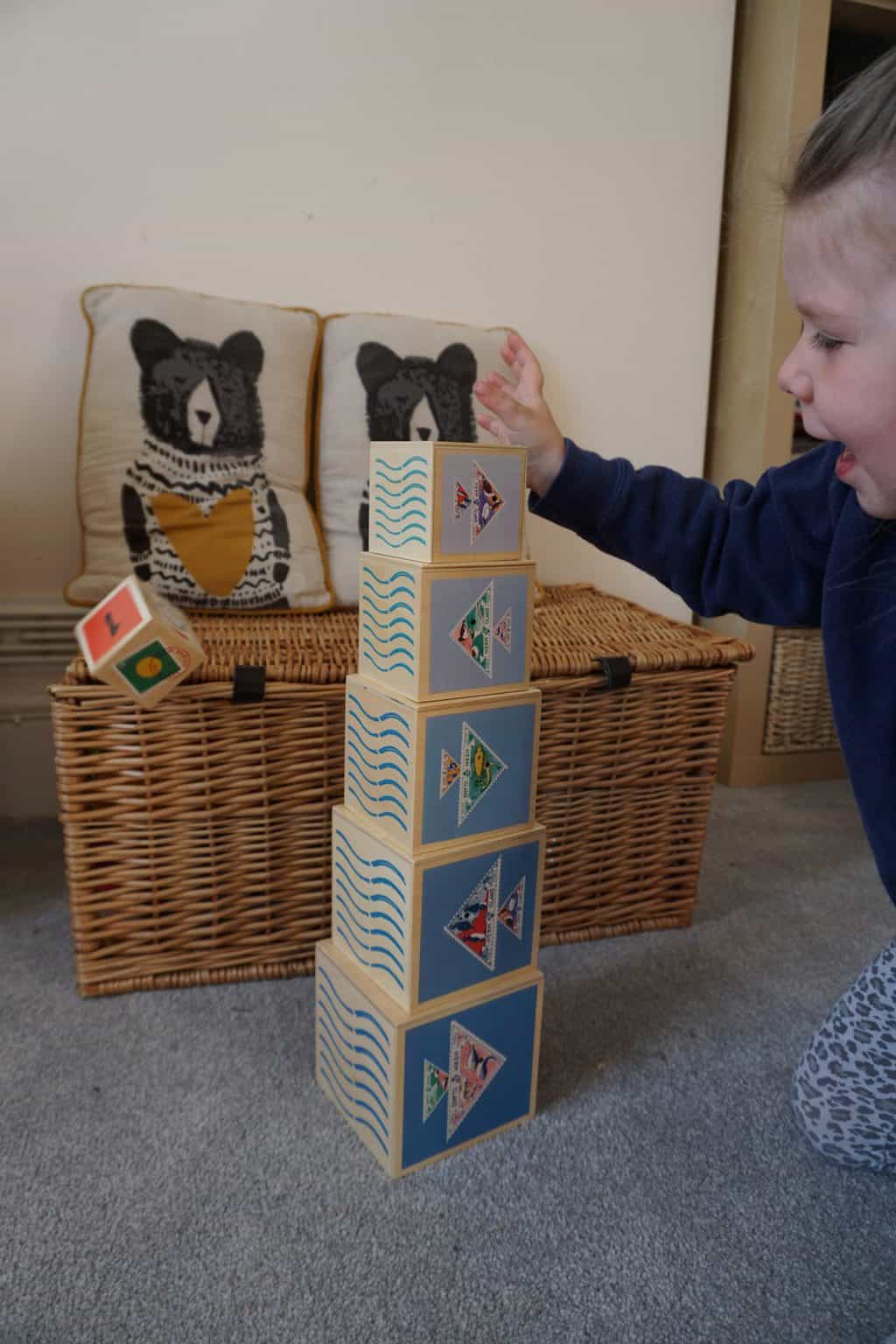 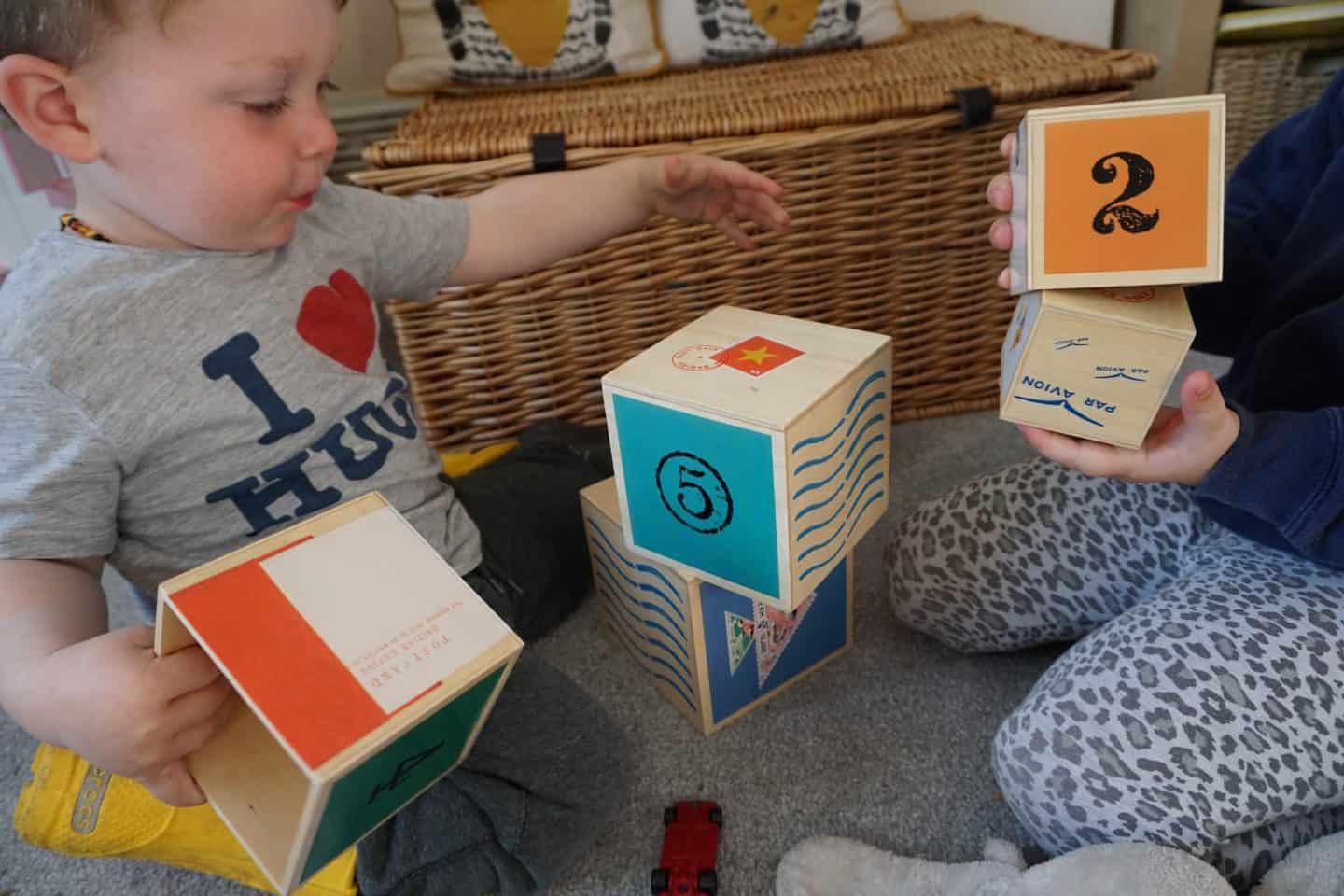 it is meant to come apart or not! We bought him a plastic fire station for his birthday, and he waited for Sam to build it, stick the stickers in the right place and give it to him – then started pulling it apart bit by bit until it was so destroyed that we had to make it miraculously ‘disappear’ overnight when he was asleep.

For his birthday though I put a few Melissa & Doug Wooden toys on his wishlist, and his nanna, aunt and Grandma all obliged so thankfully the rest of his birthday presents are proving to be a lot more long lasting! Though we have mislaid a few little cars from one of the sets!

The stacking cars is his favourite at the moment, he can spend ages taking them out and putting them back in again! Its also a good way to learn colours and numbers too, though two cars have gone missing… I’m sure they’ll turn up at some point!  The Lock and Roll garage is a bit trickier for him to use as you need to choose the right colour key to open the garage to release the vehicle, only he prefers to just pull the garage doors off at the moment! The car transporter is great for all ages and so far has withstood all the effort Arlo has put in to break it, bonus!

We’ve also been playing a lot with the ‘Nautical Nesting Cubes’ from one of my favourite baby-brands ‘From Babies With Love’. Arlo has two cuddly toys from them already (the recycled bear and this one) and now they’ve branched out into wooden toys too. Keeping with the postal theme these are great fun as they’re so versatile! We’ve had the cardboard versions before but they just don’t last long as they get thrown, sat on, trodden on and scribbled on (are my kids feral or what?) but these are going to last forever. They’re beautifully made and beautifully decorated, with different numbers and colours on too! 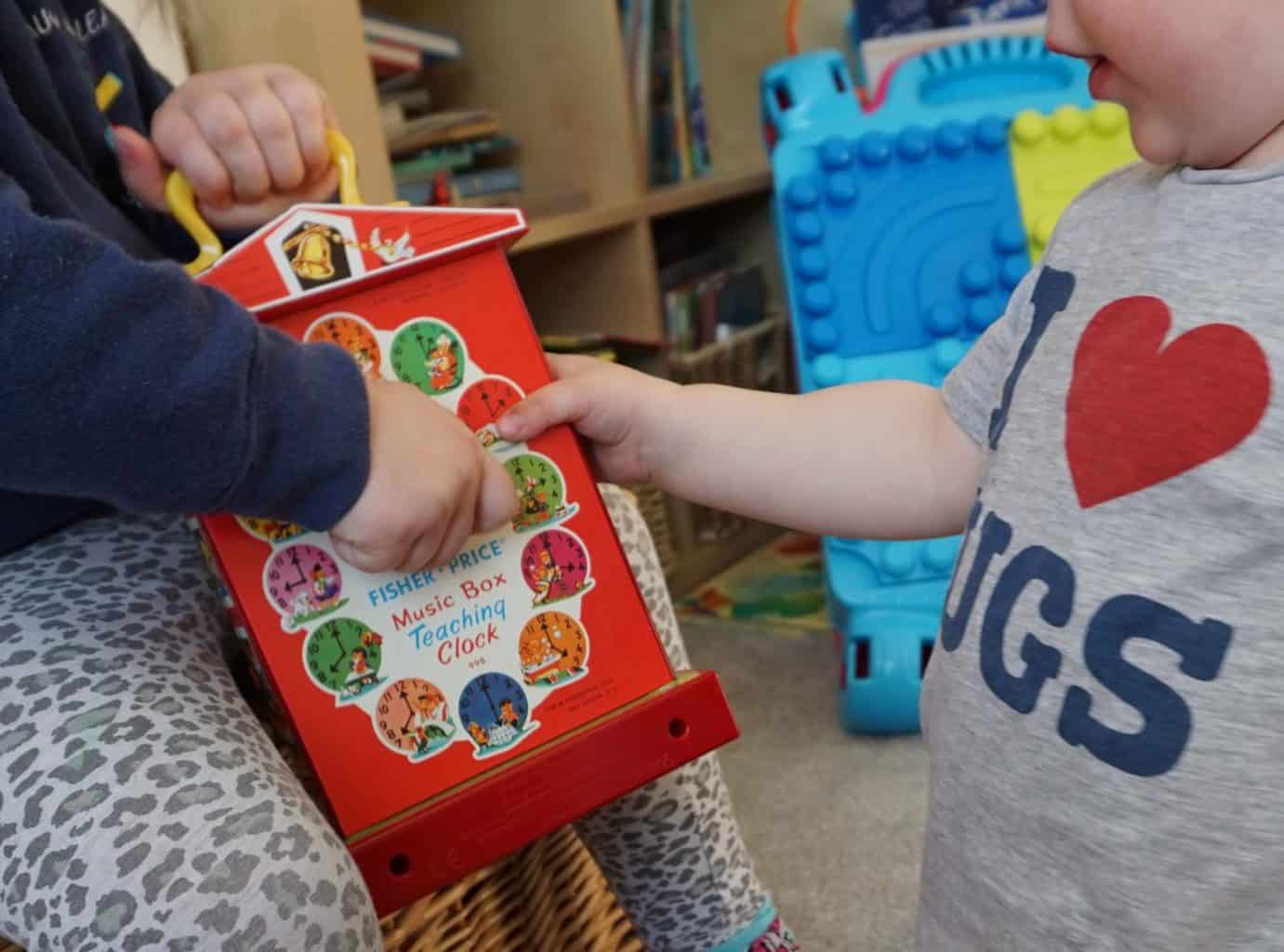 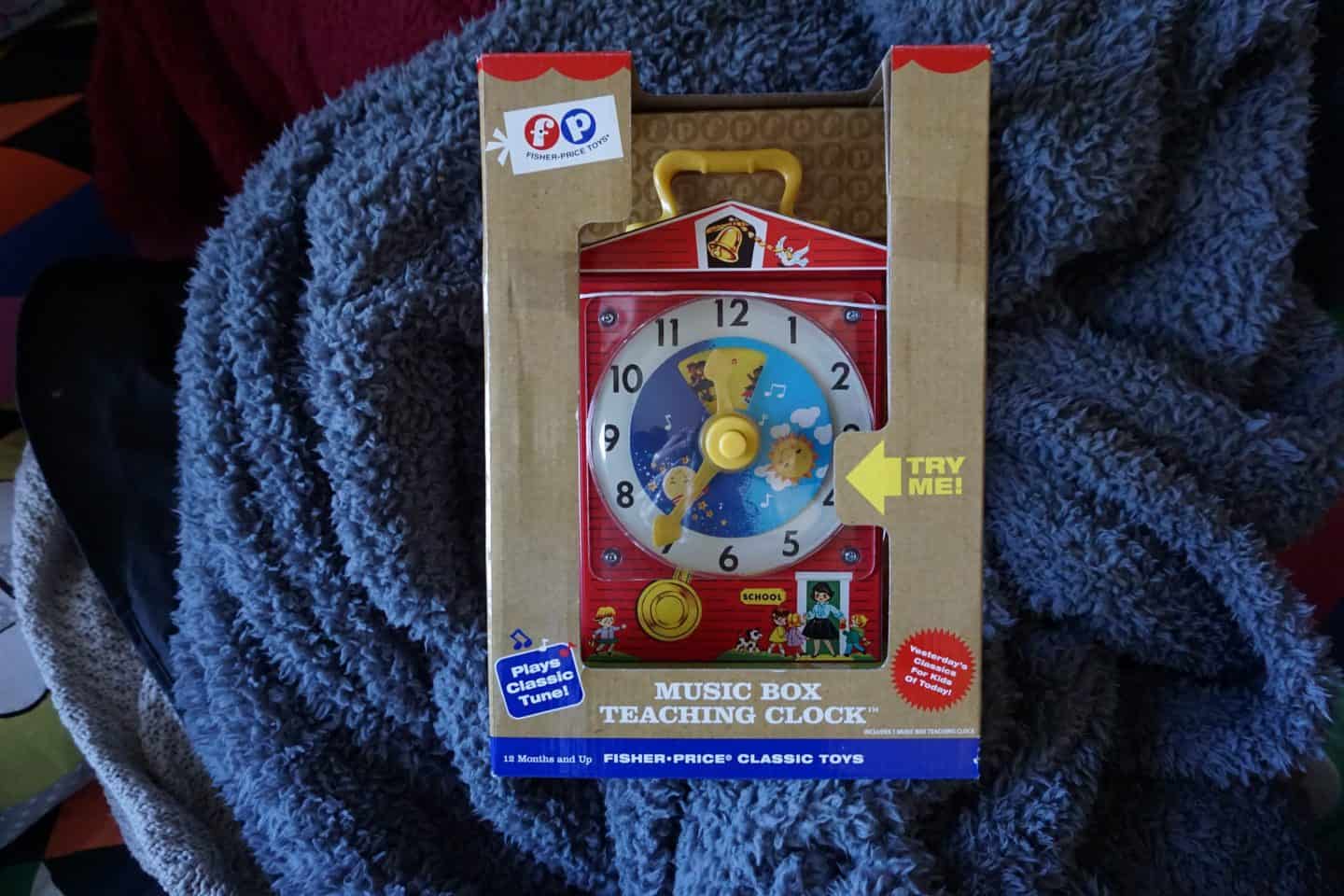 Another fun toy that though not wooden has a proper retro feel is this Learning Clock from Fisher Prices retro toy range. It’s got the classic old school illustrations and feel, and more importantly has that traditional lullaby sound when you wind it up on the back. Obviously it’s handy to tell the time too, but Athena isn’t interested in that just yet! You can see more in the children and baby gifts range on PrezzyBox, including that iconic record player, now who didn’t have one of those?! 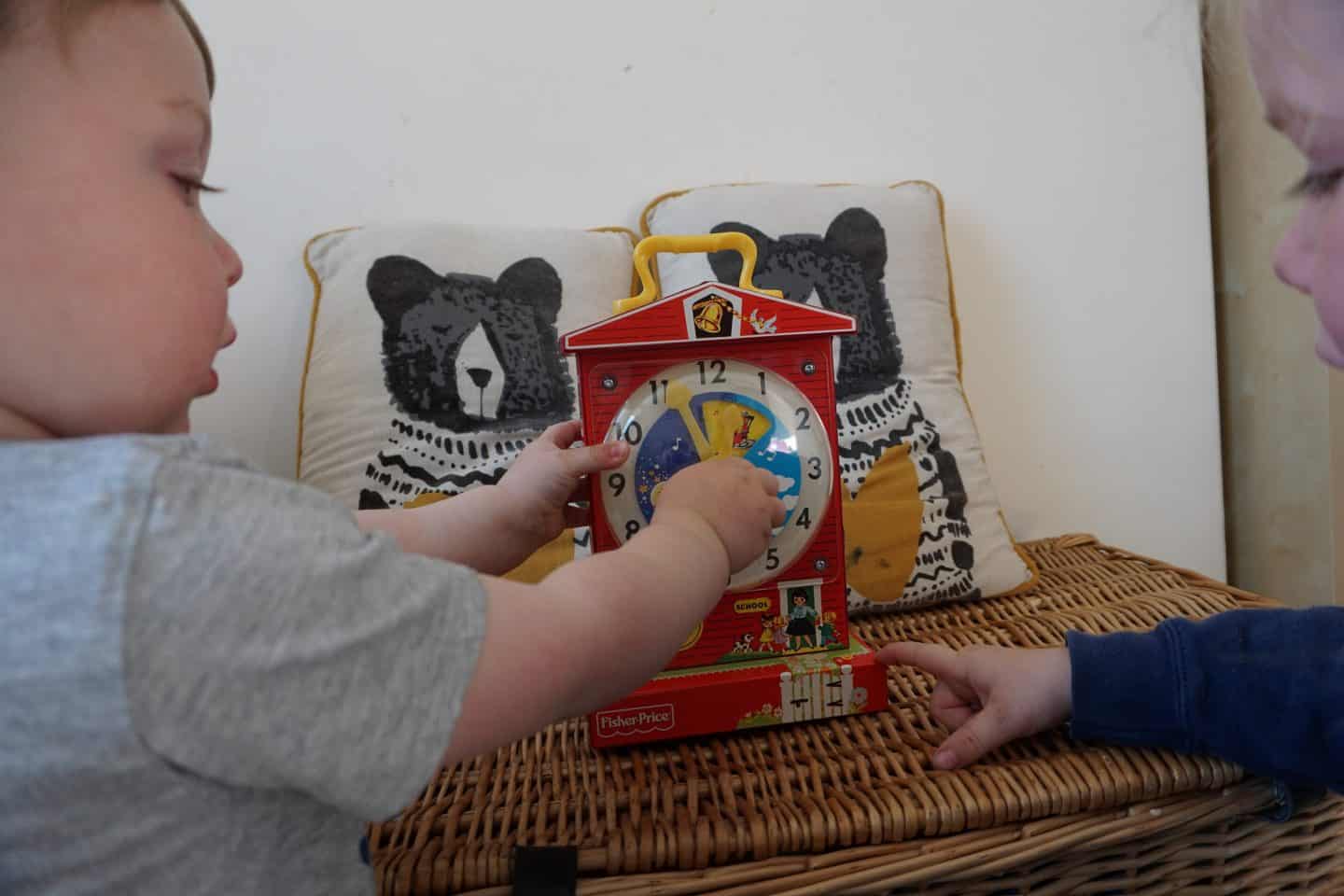 6 thoughts on “What the Kids played with: Classic & Wooden toys”