Not the most flattering of outfits, and also kind see through, however I like it and wear it lots (H&M baggy t shirt/dress, peacocks cardi). The belt is from a miss Selfridge dress, but I generally just tuck a bit of the side in to the top of my leggings so it isn’t too long. I like being a slob. I also would like to point out I am genuinely NOT this short, Sam took these and is a foot higher than me so takes photos from a height.

On Saturday I met up with Sophie, and we decided against the original plan of baking (I haven’t blogged a recipe/food post in too long!) as the sun was shining! We had a potter round the laines (pearl milk bubble tea!) and then a bit of the shopping centre, vaguely looking for bridesmaid dresses (navy!?) and then I remembered about a new tea shop that had opened so we pootled up there (its round the corner from Topshop) called Time for Tea, plonked ourselves on a little table in the sun and ordered awesome ‘proper’ tea. She had Cherry & I had ‘spiced chocolate’ I think it was called, whatever it was it was very very nice, not too chocolatey, but enough to detect the taste, and a tiny little hint of chilli. scrumptious, even if I did manage to wedge the lid of the teapot so it got stuck! I hope they managed to fix it!

After that Sophie headed homewards and I strolled up towards my friend Yasmins in Hove(ish) and then we walked to the seafront, had a cup of hot chocolate at the meeting place cafe, bought a book from the second hand book stall that’s always opposite the old pier at weekends and then home for a catch up on the last three episodes of this seasons gossip girl (err, anti climax much!) and 2broke girls, so now I’m going to attempt to catch up on Pretty Little Liars because everything else I am watching has finished the season!

and some random drivel accompanied with pictures: 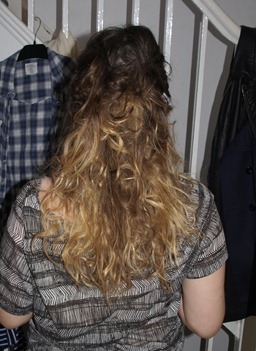 No word of a lie, Sam genuinely said ‘you could wear your hair like that for the wedding’ OH SAM, this is bed head too tangly to comb, not an actual ‘do’ 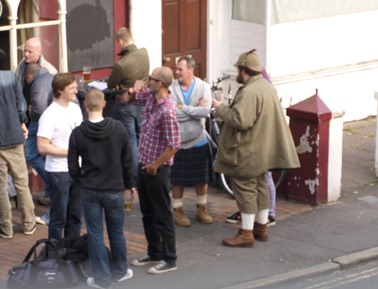 Sherlock Holmes having a fat day and a pint with the man in a kilt at the pub over the road. 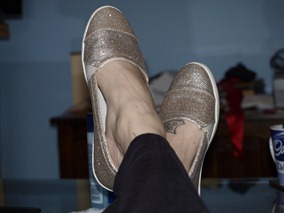 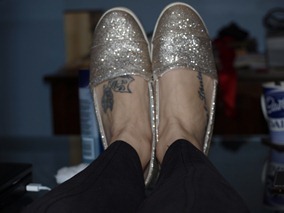 New sparkly shoes! Went for these when I couldn’t decide what colour converse to get. However they eaten the back of my ankles. I actually had to walk home on my tip toes looking like a freak to ensure that they didn’t actually bleed. It made me wearing heels at a work all day seem like a doddle!

8 thoughts on “In which I am comfortable”