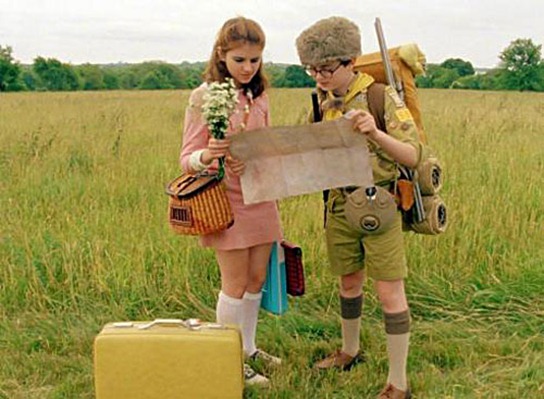 On Thursday night I strolled up to the Duke of York Cinema with Tina (because obviously Cineworld where I have an unlimited ticket didn’t deem Brighton ‘hip’ enough ( say whhhhuuuut?) to show Moonrise Kingdom) It was immensely pleasurable, and I enjoyed every last second of it.

The young actors that played the two main characters both managed to become these slightly unusual, and not particularly well liked kids, and portray them perfectly, with just the right smidge of surreal. Susie also had an awesome line in collared dresses and knee socks.

I really like films from this era, Now & Then, Stand by Me and this somehow managed to reflect the ‘simpler’ times and the quaintness of the island. In a nutshell the story is this: orphaned scout is camping on an island where hardly anyone lives, he runs away to meet this girl who he had been pen pals with. Everyone chases them, they’re found, they run away again… then the end happens and I wont tell you what that entails because you should go see it for yourself.  But sprinkled throughout the plot are hilarious little interludes from a random guy who lets you know what’s happened or is about to, and some vague insight into the minor characters background. The story unfolds cleverly, with a sense of innocence and the cinematography is clever. Plus I want to live in an American house in 1965.

Just go and see it, you will enjoy it because if you don’t you’re weird.

The Duke of York cinema is also showing a Clueless & Meangirls ‘sleepover’ double bill next Saturday… but Tina and I decided that we’d rather do Stand by me & Now and Then… and for a real cinema vibe get Sam to sit on the floor in front of us obscuring the view of the TV. 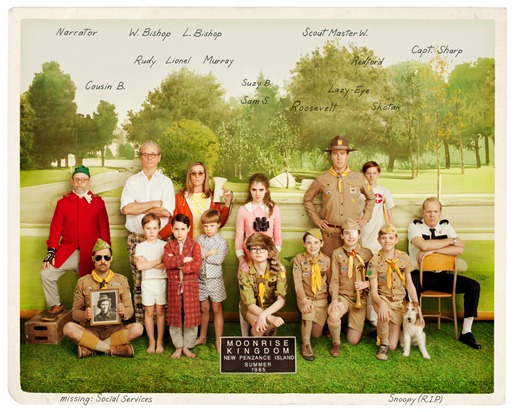 What were your favourite childhood films?

In order, mine was Return to Oz, Drop dead Fred, and the Labyrinth. I watched that one so much the tape fell apart and we had to re purchase it! And I know all the words, but who doesnt

*both images from IMDB.

5 thoughts on “In which I watch Moonrise Kingdom”