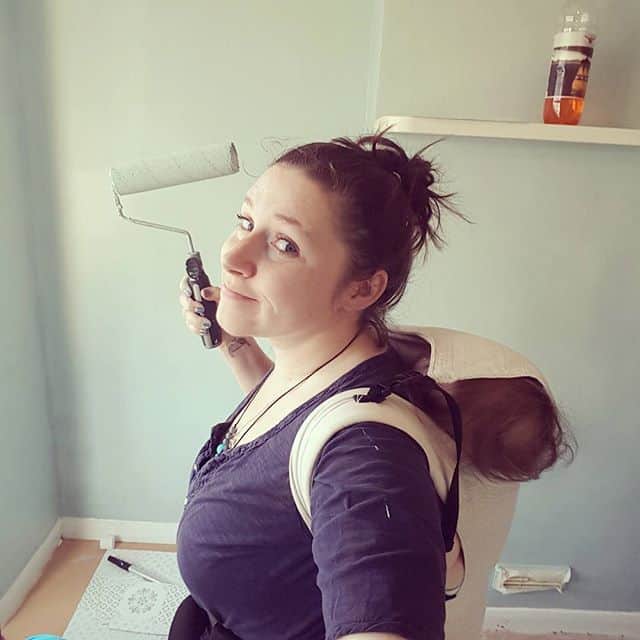 Well this one might be long, apologies in advance for waffling but grab a cuppa, or an Easter egg… Oh! Happy Easter if you celebrate it and happy long weekend if you don’t! What’s new with me? It feels like an absolute age since I turned my laptop on, in fact it has been almost a week as I kept meaning to get it out but the fact that we moved house and have a to-do list as long as both my arms plus one of Sam’s has kept me away from my computer and blogging for a little while! We have however had out first play on the beach, moved house and decorated most of the new one before we moved into it!

So I wrote last week about everything getting on top of me and I still feel like that to a certain extent, but I feel better about moving now we’re actually in our new home. It’s going to take a long time for us to get it exactly as we want it but there aren’t too many boxes left to unpack, and we’re heading to Ikea on Tuesday to get  a few bits to make the place a bit more organised too. I have also been distracting myself from unpacking with getting to grips with snapchat, I’m belledubrighton on there, unsurprisingly! Lots of amusing face swaps with Athena at the moment!

Arlo is still barely eating a thing, and feeding (from ma boobs) every two hours or so. It’s really draining! Athena has mostly taken to house move in her stride, she’s been a bit more tearful than normal but has slept well every night and likes to show people her ‘new room’. I haven’t had a nap since we moved and boy do I feel like I need one, I used to get at least an hour most days which really helped make up for the loss of sleep overnight with Arlo but for various reasons it’s just not happened and I miss naps!

Last week I did manage to escape from packing and sorting hell and spent the afternoon (in a high necked dress, oh yes!) at the #BTONBlogMeet that the lovely Laura organised. I’d not seen any blogging chums for months, definitely well before Christmas and I missed them so it was ace to catch up so I hardly took any pictures! All 30 bloggers filled out the bottom bar at The Globe (one of the places Sam and I used to go when we were dating so nobody from work would see us, ahh the memories!) As I said it was so nice to catch up with bloggers that I’ve known for a few  years, and I am so pissed off at myself for not talking to more people, bloggers that I didn’t know. That’s sort of the whole point of these things after all! I did however meet Lu from Little bit of Lu who told me she had been reading my blog since before I had kids, which stunned me and made me really chuffed! She was lovely too so go and follow her blog, she’s a relative newbie to the blogging world! After a few hours of chatting I had to leave to head home to the baby and the packing but I was handed a lovely goody bag on the way out!  Most edible things were eaten and almost everything else was packed into a box after a swift and very un-blogworthy photo…

I was really excited to see the Stigu Planner, it looks perfect for organising blogging things, deadlines, emails, expected parcels etc! I’ll keep you posted on this one!. Beauty wise there were treats from: .Minty Coco, Green People, Bio Oil (stretch marks be gone! so pleased to see this one in there as my other bottle is almost empty!) BeeGood, MooGoo  (a lovely looking cleansing bar), WICK candle boutique in Hove donated a gorgeous ‘green balm’ face cleanser and cloths and I can’t wait to try it as soon as I’ve finished my current cleanser up,  Meraki make up wipes and lip balm (the wipes are really refreshing), Body Fantasies ‘Pink Vanilla Kiss’ Body Spray and Anatomicals face masks, oh and a leave in treatment for hair from Chilled that has made detangling Athena’s really fine hair after a bath a doddle!

Other lovely bits included: Life Tonics flavoured coconut water – very tasty, I had mine on the train home!  Funkin Cocktail Mixers in Peach Bellini and Raspberry Mojito, Sam has his eyes on these but I do love a Mojito! One day when I’m not too tired to have a drink we’ll crack them open, esthechoc – I’m not wholly sure how or even if it works  (it gives clearer skin…), but hey, I love chocolate! – UFit protein millkshakes in chocolate and strawberry. These were perfect for the day I had two fillings and a really swollen mouth and could only drink through a straw, they kept me going and I’m a convert! – Metcalfes Cinnamon Sweet Skinny Popcorn, my favourite flavour of popcorn so I was so pleased to see these… also eaten on train on the way home! Plus some Tasty Little Numbers Treats, which were tasty little numbers indeed!

Oh and I won two things in the raffle (raising money for Grassroots Suicide prevention, a well chosen cause!) which was a bunting kit from Crafty Creatives which was sent home with my MIL as I know she’ll make a better job of it than I would, and some lovely hair accessories from Lylia Rose, which Athena has nabbed most of, the little madam!

One of the brands in attendance was Homage; a gorgeous stall showcasing items from the larger collection online and instore (Bath street in Brighton) including some awesome photo frames and tin mugs, Once we’re settled and unpacked a bit more I’m going to pop in to get some photo frames and probably one of the geometric shopping bags! Snact was another brand, who produce fruit snacks from the bits of fruit that would otherwise be wasted, which is a great idea. Finally I had a little chat with Purepotions who are a Brighton based company , founded by a mum who wanted to find a natural and safe moisturiser for her daughters skin, I’ve got a sample pack to try which I’m looking forward to as I love to support local when I can!

So it has been pretty busy time for me and my little clan, we’ve enjoyed the Easter weekend so far and not done a great deal as everyone is exhausted and Sam is working. I worked the day after we moved but he’s had the whole week off and it’s been great to spend more time together, even if we’re so tired we barely talked! I’ll do a separate update on house stuff with a few photos (and the story of how we almost burnt the place down, whoops) next month at some point.

Happy Easter, If you made it to the end I’ll share my mini eggs with you, as soon as I find somewhere still selling them!

One thought on “Stuff on a Sunday 54”