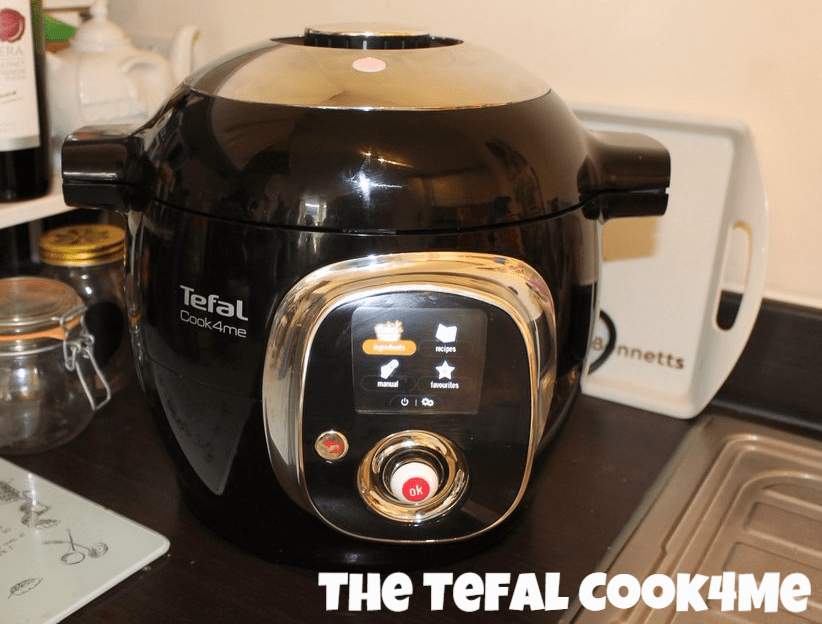 “This is the best thing that has ever happened to our kitchen” said Sam about a week after the Tefal Cook4Me arrived, and I’m inclined to agree with him! We’ve been using it for around a month now and it has probably been used on average five times a week!

What is a Cook4Me? It is a magical machine that creates meals in minutes. It browns, cooks, reheats and steams. You can delay the start time too so you can have a meal ready for exactly when it needs to be, meaning I can prep in the afternoon whilst the kids are eating or sleeping, or before I head out the door for nursery pick up and know there will be a meal ready when I get in! There are over 30 recipes that cook in under 15 minutes, including risottos, curries and stews, and less ‘juicy’ dishes like gammon joint, quinoa & feta salad and pork spare ribs. All these recipes are pre-programmed into the Cook4me, along with a selection of starters and sides (like soups, tajine, hummus) and desserts including pears in red wine, molten chocolate puddings, which I’m saving to try out over Christmas!

How does it work? The Cook4Me is easy to operate, with on screen prompts that are easy to follow, telling you what to do each step of the way. The main dial lets you navigate between menu options and pressing it selects them. There is also a back button and that’s it! Its an incredibly well designed interface, the screen is at the front and illuminated so can be seen in any light. You can add recipes to your favourites too for speed next time you want to cook a favourite dish. There is a light on the top next to the lock/unlock mechanism for the lid and at the reverse is a condensation catcher, and you’re reminded to empty it at the end of each use. The outside is easily wiped clean, the cooking bowl and steamer basket can be cleaned in the dishwasher for ease.

Once we had tried and tested a few of the pre-programmed recipes we created our own recipes, like curries and pie fillings using a similar recipe as a base for time guidelines. A couple of times I added too much liquid, and as the Cook4Me releases less steam than a regular hob cooked meal but this is easily remedied by using cornflour and then remembering to add less liquid next time!

Other things we’ve used the Cook4Me to cook other than meals from the recipe book:

For vegetables, fruit and pulses there is a pre-programmed function where you choose the food you want to cook, tell the Cook4Me the weight and it decides a cooking time. Obviously these can be tweaked to suit your personal preference but we’ve actually found them to be pretty spot on! once cooking is over you get the on-screen options to continue or end cooking so it’s easy to cook for a little longer if necessary.

The meals that we’ve created have all been delicious, although although annoyingly I have lost most of the photos I’ve taken of them as they were on my laptop when it died. Firm favourites are the Bacon & Leek Risotto (made at least once a week now), Farmers Chicken (which is cheap to make and serves up to 6 people) and Sausage and Bean stew. We’ve made about half the main meals now, and as I try and do my shopping online it makes meal planning easier as you get a recipe booklet telling you what you need for each meal, dependent on how many you are making it for. I tend to make each meal up for 6 people, then I have lunch for the next day sorted without any extra cooking! It can be reheated in the Cook4Me too!

It’s the perfect machine to have in a kitchen when you’ve got one or more young children too, no saucepans on the hob, no red-hot cooker doors to keep them away from, very little prep time, and what there is all happens at the same time. Once you’ve got the meal in the Tefal Cook4Me  you’re good to go! It’s great knowing how long exactly till dinner will be ready too, as often we can squeeze in and extra book, or even do bed time for Athena if she’s eaten at nursery without having to rush off and stir something or open the oven door to check the progress.

What don’t I like about the Cook4Me? I’ve thought about this a lot, and apart from the fact that it doesn’t clean itself (I wish!) I can’t really think of any improvements. It would be nice if it came with another cooking bowl, so you could make up rice for a meal without having to wash the bowl after making the main course, but you can buy them direct from Tefal for less than £20 anyway!

The Tefal Cook4Me retails for £249, you can purchase it direct from Tefal, or from Lakeland, Argos & John Lewis & Amazon.

I was sent a Cook4Me to review for the purpose of this post. All opinions and words are my own.