A few days before I went into hospital I had my hair done at  the Trevor Sorbie Brighton salon, in the Lanes. I’d been a few weeks before for an evening to learn about some Catwalk hair styles coming this year (See further down the post!) and was invited in for a cut and colour, perfect timing for making me feel a bit more glamorous (hopefully) post baby! 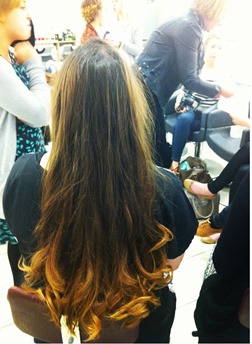 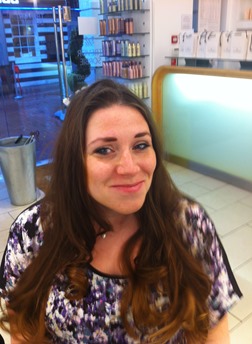 Before: long,ratty & and with my old ombre starting to show through again! I hadn’t had anything done to it since just before I got married (November!), and that was a trim and an all over at home box dye to go over the ombre so it was all one colour for my Wedding! It grew at a right old lick during my pregnancy, but had no shape or style. I wanted something that would look good with little effort, and to loose the raggedy ends! 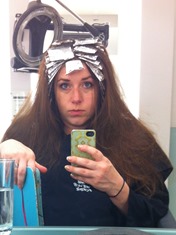 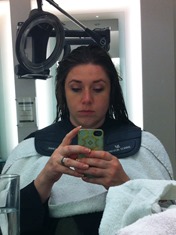 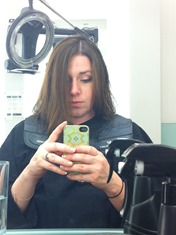 During! (Am I the only person who hates looking at themselves in a mirror for a prolonged period of time?! I took my kindle to avoid having to do so!) 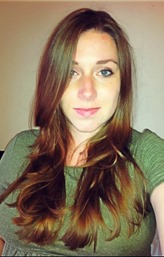 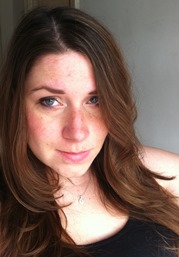 After! perfect subtle caramel highlights, & layers so that even with no styling it looks ‘done’. Lets face it, I’m not going to have much time for styling with a new born am I? I was sent away with a deep conditioning treatment and some salt spray though, to keep it looking its best!
Sam Chapman was in charge of the colour, and made sure that the way he put the highlights in meant that there would be no obvious roots, as I wasn’t sure when I’d next be able to get them re done, and Fergal gave my previously long lank hair boost and shape effortlessly, plus he did some fancy winding of my hair around conical bristle brushes to make it look extra ‘voompfy’, which is something I will try to recreate when I have the time! Also, not one person asked me about my holidays… something I hate at any hairdressers! Instead we chatted about renting/property/how to get rid of draughty windows/the fringe festival and all sorts, it was like chatting to friends, no awkwardness at all!
The photos below are from the ‘catwalk style’ night the salon put on a few weeks back… 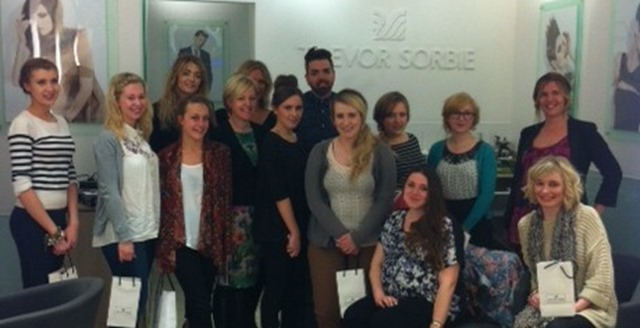 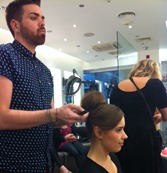 The model on the right is the ‘Wet look sporty Ponytail’ from the Peter Pilotto A/W 2013 show from London Fashion Week, and the main point is the placement of the ponytail, to avoid a ‘frumpy’ look the ponytail should start inline with the jawbone, and to elongate it Fergal used 2 long lengths of hair elastic to keep it away from the scalp. You can also see Fergal creating a perfect bun on Suzie.
On the left the look Anna showed us was from Marc Jacobs A/W 2013 London Fashion Week show, and was &0’s inspired, with a side parting flattened, to avoid looking too 80’s! lots of teasing went into this look, but Anna described how it could be toned down for your average night out on the town if you’re not quite brave enough to go all out!