A wet week, here’s what happened: 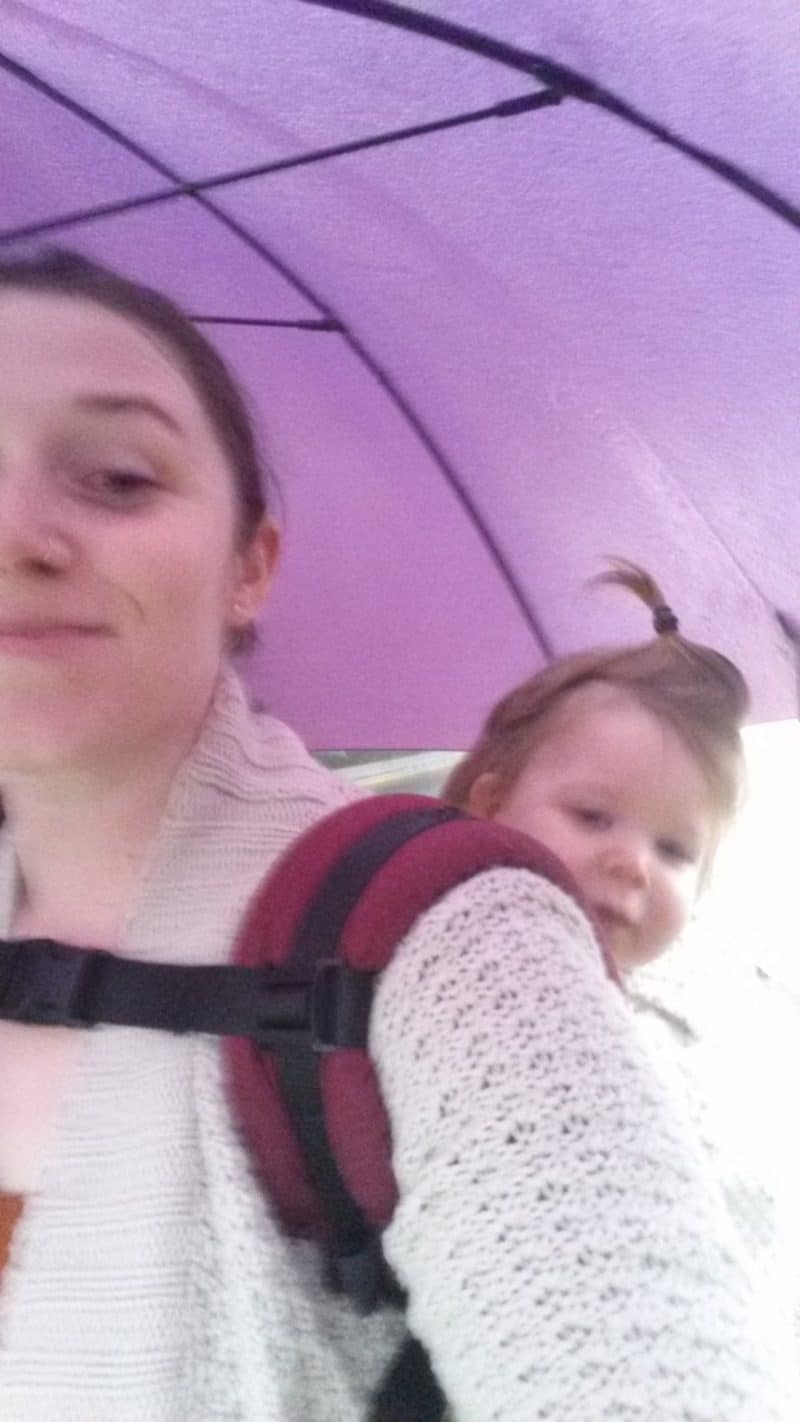 Monday was a lazy day, full of Cbeebies, book reading and cleaning, with a very wet trip to the Midwife for my 28 week appointment in the afternoon. I don’t have a waterproof coat that does up over the bump, so decided in my wisdom to take Athena on my back in the carrier with an Umbrella. Daft idea, she was dry as she was high up but from waist down I was pretty soggy, it turns out she loves to hit the umbrella from inside causing all the water on it to shower off all over me! As it was still raining after the appointment I naughtily booked a cab so we didn’t get any wetter! It was odd having Athena sat on my lap in a moving car (no compulsory car seats in cabs) but it was only a very short journey!

Tuesday seems to have completely disappeared from memory, all I can tell you is that I definitely went to work! I did start reading a new book though, The Goldfinch by Donna Tartt, and couldn’t eat after 9pm for a glucose blood test the next day.

On Wednesday I had to be at the hospital for 9.45 ready to have my blood taken exactly 2 hours after I drank the 410ml of lucozade (which I hate!) and Sam was going to drive me there and wait with me, then drive me to work as he was meant working from my hotel that day (hurrah! a lift to and from work, I thought…) But just as we got into the car he had a phone call saying he had an auditor in so had to be at his own hotel! He dropped me near to the hospital and wheel span off (tut tut, but these audit days are super stressful and a lot rides on them, I know from experience!)  I gave my blood, then scoffed the three chocolate biscuits I had stashed in my coat pocket, along with a bagel as I walked to the train station to head to work! I got the results later in the day by phone, the glucose levels were fine but I have low iron levels, which makes sense as I am often exhausted and feel like I could nap on request! Thankfully Sam passed his audit, so we had a celebratory chinese takeaway for a treat!

Thursday was my work Christmas night out, so I took a change of clothes to work and enjoyed a sober Christmas party! People were dirty dancing before the desserts even arrived, but this was fine by me as I managed to pilfer a second pudding that nobody was interested in! Oh! On the way to work I sat opposite an elderly lady with a dachshund on the train, and boy did she love to talk! But she was lovely, full of stories and I was a bit sad I had to get off her train to change to the one to take me to work! I really do like talking to people with interesting stories to tell.

On Friday I woke up feeling exhausted, after a long day and late night the day before and a rare wake up from Athena an hour after I got to sleep, so she was in bed with me chatting away and drinking milk till 2am. Thankfully she didn’t wake up till almost 9, but I’d woken up when Sam got up for work at 5.30am, and again in the middle for a piddle! Thankfully I had a prescription for iron tablets to pick up from the Doctor, so after lunch and Athenas nap we went for a walk into town via the doctors. I also did another few loads of cloth nappy washes, and got a few blog posts written in the evening as Sam was out with friends discussing his ski trip in a week or so! Oh, I turned 29 weeks pregnant and baby is now cauliflower sized! 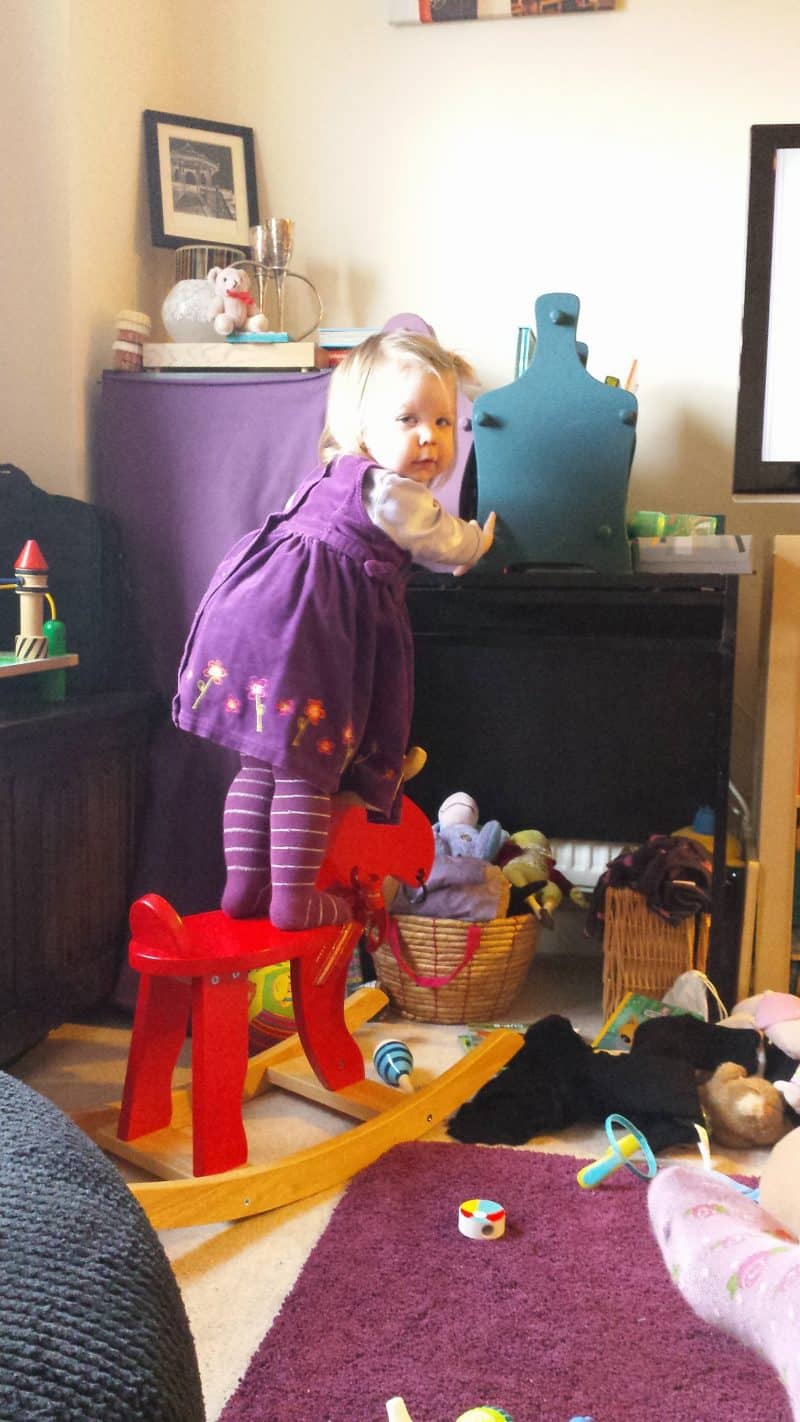 Saturday was lunch out in town with one of Athenas god-mothers, Emily who is still on holiday from her nursing degree, lucky so and so! Athena seems to be coming down with a cold or has another tooth coming, or perhaps there is some other reason but she was a bit of a grump, didn’t nap much and didn’t eat much of her dinner either! I’m still feeling really tired, I don’t think the iron tablets are doing their job yet, so in case I don’t manage to get my laptop on tomorrow morning our plans for tomorrow are to do not very much, cuddle on the sofa and do a few loads of washing! Thrilling Sunday, eh? The evening will be spent wrapping and addressing ebay parcels that sold tonight and hopefully tomorrow night too! Oh, Athena has been testing her climbing skills, mostly on the rocking moose, but also on chairs that the pushes into the kitchen to gain access to the worktops, joyful!

Wishing you all a super fantastic week, I’m hoping it is less rainy than this one was! Don’t forget there’s a 20% off code for flower delivery from Debenhams on the blog here if you fancy cheering yourself, or someone else up! It doesn’t expire either so make a note of it!